The Black-browed Albatross on Heligoland, Germany

Although small in size, the island of Heligoland is considered one of the best places to find rarities in Germany. Having produced many national firsts and other astonishing finds, birders from all over the country long to visit the island, either to twitch or find rarities. I am therefore fortunate to be living and working as a volunteer for a nature conservation organisation on this magical island, and have seen many great birds over my two years spent here. By far the greatest must be the Black-browed Albatross that I could so easily have missed last year.

While I was away in Finland on 28 May 2014, Gotthard Krug, known for finding rare and elusive birds on Heligland, spotted a bird among feeding Northern Gannets which he thought looked odd — it was odd indeed, and proved to be a Black-browed Albatross! Other birders weren't able connect with the bird until the late afternoon, when it showed well flying among Kittiwakes and gannets around the island's cliffs.

It was seen well throughout the following day by many visiting birders, sometimes flying just metres above the crowd, but then disappeared. It wasn't until 4 June that it returned, again staying until the following day. On 12th, the day of my return from Finland, it fortunately reappeared for a third time, again showing well in the beautiful evening sun, even dropping down just a couple of metres in front of me — what a bird! The albatross was quite mobile and was seen flying all over the island; sightings were reported from different places but most regularly it visited the Lummenfelsen, where Northern Gannets, Common Guillemots, Fulmars, Kittiwakes and Razorbills all breed.

Over a month passed before another sighting, although not on Heligoland — on 17 July it reappeared at Skagen, Denmark, where it had also been first seen on 25 May. Later on 17 July it even spent time sat on the harbour wall at Hirtshals for over an hour before flying off. However, it did not return to Heligoland and the Hirtshals sighting was the last of 2014.

During the late morning of 19 April 2015 a Black-browed Albatross was seen 30 km north of Heligoland, flying south. Great excitement understandably followed among local birders, but all efforts were in vain as the bird did not show up that day. A tremendous male Pallid Harrier (14th record for Heligoland) kept birders busy the next day, but the albatross was still nowhere to be seen, despite extensive searching.

On 21 April there were rumours of an albatross seen west of the island, but remembering erroneous claims from the previous year, hopes that it might be the bird were not very high. Standing at the cliffs watching the open sea, a few local observers including myself seawatched in the hope that we might finally catch a glimpse. After a checking out a resting black-backed gull far off on the cliffs, my eyes swept over to the Lummenfelsen, where the bird was observed last year. In doing so I did not expect to see the albatross, but suddenly there it was, gliding over the top and showing its dark underwing and unmistakable size! Finally seeing the bird that we were all looking for gave me a feeling unlike anything I have ever experienced, and picking it up first only enhanced the excitement. 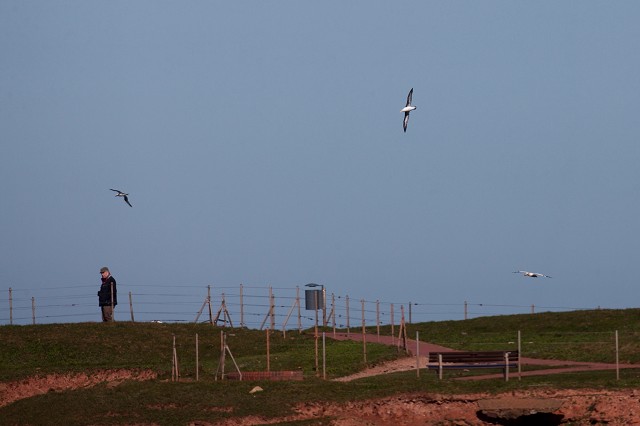 First distant record shot of the albatross, seconds after it was discovered on 21 April 2015 (Photo: Felix Timmermann)

We simultaneously informed mainland birders of its return as we ran towards the location that we'd last seen the albatross. We quickly relocated it flying in circles around the famous emblem of Heligoland, the Lange Anna (part of the Lummenfelsen), where it gave excellent views to all. It repeatedly rested on the cliffs, sometimes only briefly, and then flew off again, gilding effortlessly in the rather strong northern wind. That evening it was again seen, exhibiting the same behaviour, before flying off some time before sunset.

The first visit early in the morning produced nothing between 6 am and 8 am. However, just after I left, the bird showed up again and rested on the cliff. It must have spent the night either hidden out of view on the cliffs or out on the sea, returning in the early morning.

The albatross showed irregularly throughout the following two days; sometimes it wasn't seen for a few hours but then suddenly returned. In the weakened wind, there were some changes in its behaviour compared to the first day of its stay: initially it would fly low over the sea, even dipping the tip of its wings in the water as it flew, while on 22nd, and even more so on the 23rd, it would glide high and rest fairly often on the cliffs or sea. 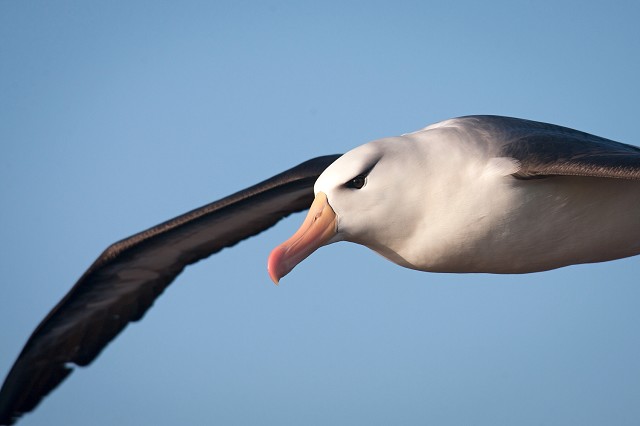 Eye to eye with the mollymawk! (Photo: Felix Timmermann).

Despite being larger than the resident Northern Gannets, the albatross was not attacked by either Kittiwakes or Herring Gulls, which were already at their nest sites close to the albatross' favoured resting spot. The final sighting was during late afternoon on 23rd, and the bird is yet to reappear this week. The obvious question is whether this is the same individual as in 2014. The likelihood is clearly yes: its behaviour is also consistent with 2014, although this year the bird seems to have slightly more extensive grey on the head. 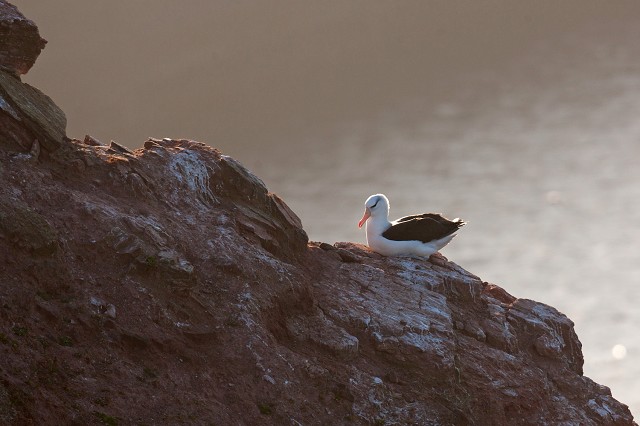 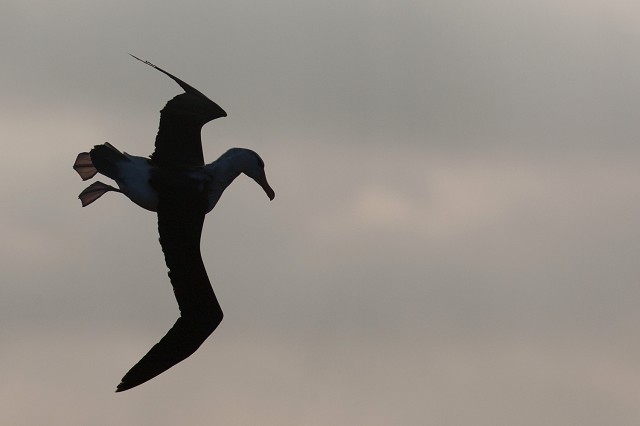 Surprisingly often the albatross was observed flying over the crowd and the entire island, in this case using the strong northern winds to glide above me (Photo: Felix Timmermann) 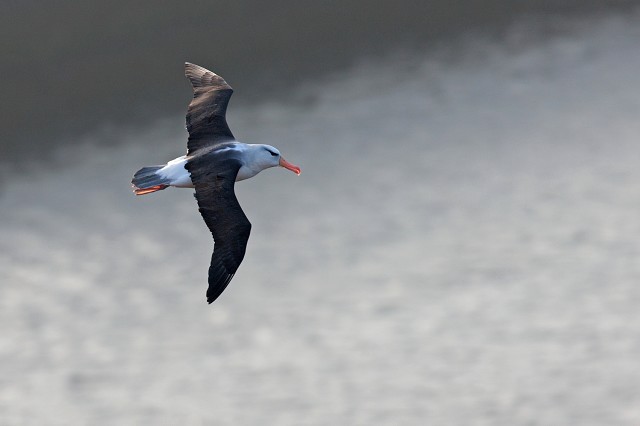 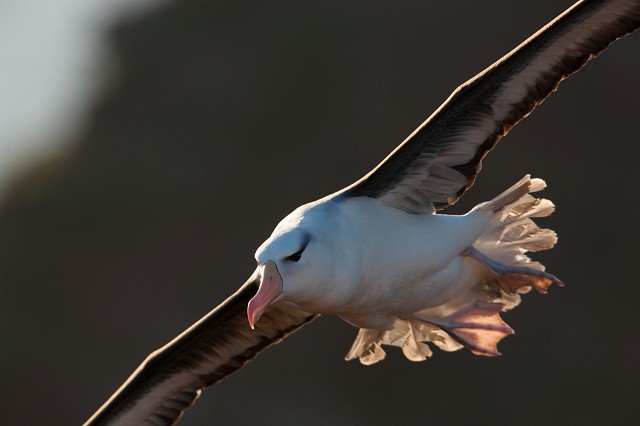 A magical moment with the albatross showing beautifully among Gannets and Kittiwakes at the Lummenfelsen in June 2014 (Photo: Felix Timmermann)