For most, the idea of discovering and describing a single new bird to science is a life-defining moment. Yet, in a recent paper published in Science, Frank Rheindt, associate professor at the University of Singapore, and his team describe an incredible 10 new bird taxa (five species and five subspecies) – the largest number of novel bird descriptions from a single geographic locality in more than a century.

They originate from three islands off the east coast of Sulawesi, the largest island in the biodiversity hot-spot of Wallacea. Crucially, the satellite islands of Taliabu, Peleng and the Togian Islands are separated from Sulawesi by deep water. For example, despite being just 12 km from the mainland, Peleng has never been connected to Sulawesi, providing ideal conditions for the speciation processes postulated by Alfred Russel Wallace during his numerous expeditions to the region in the late 19th century.

Having first visited the islands as a doctoral student in 2009, Rheindt, the paper’s lead author, revisited with his team in an expedition from November 2013-January 2014 in order to gather the observations, specimens and sound recordings necessary to provide evidence for his suspicion that the birds he had seen four years prior were novel taxa. Negotiating notoriously difficult Indonesian research permits, hitching rides with empty cargo ships and slumming it on remote mountainsides for days at a time, Rheindt and his team were justly rewarded. 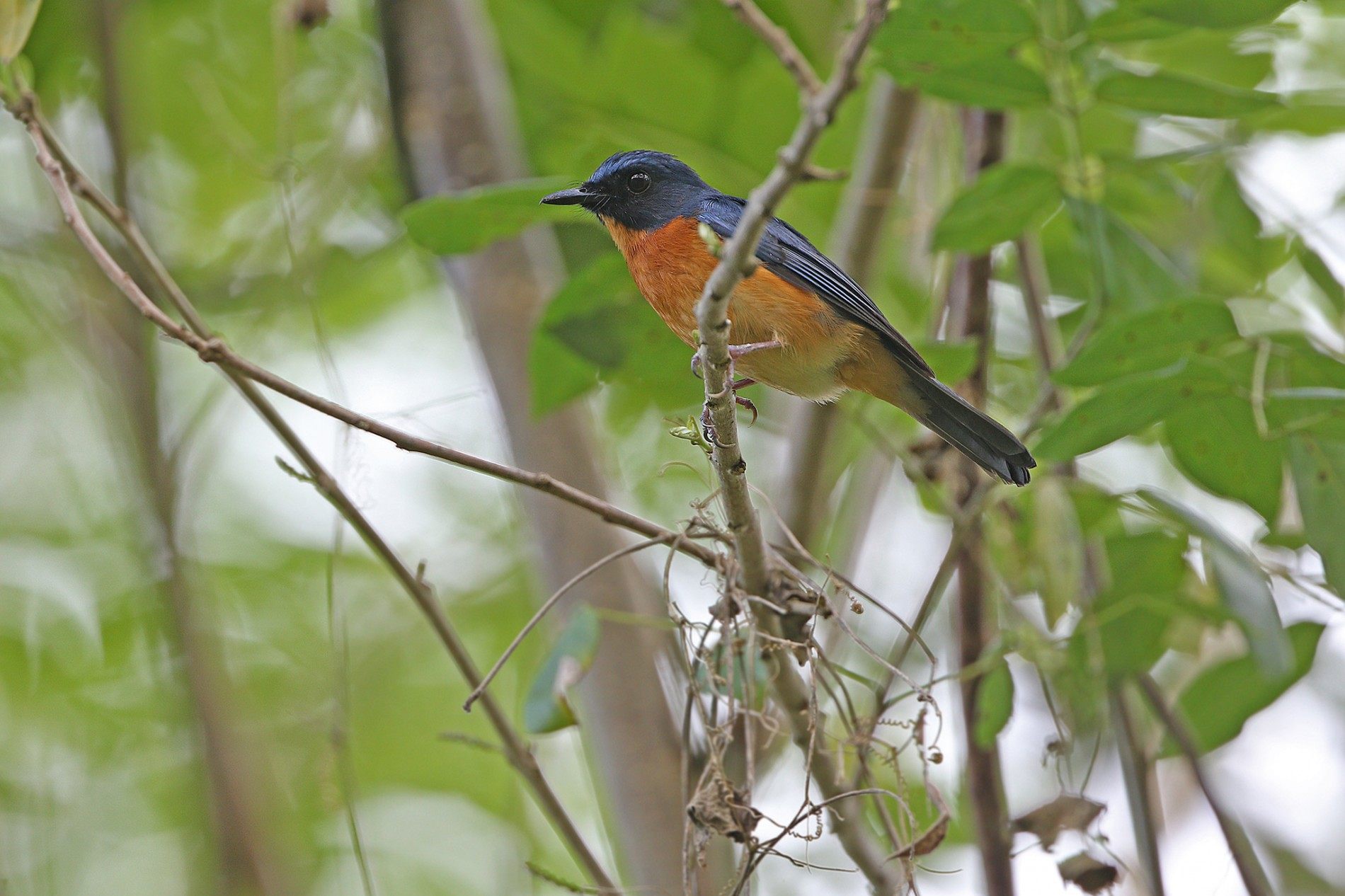 The birds described were mentioned (and mostly illustrated) in Eaton et al (2016), of which Rheindt was a co-author; their formal description has been long awaited. The 10 new taxa themselves are described in the 104-page "Supplementary Text" as follows:

Peleng Fantail Rhipidura habibiei
Named after the late Bacharuddin Jusuf Habibie, the third president of Indonesia, this taxon is restricted to montane forest of Peleng above 750 m. It is part of the Rusty-bellied Fantail (Sulawesi and the Sula Archipelago) radiation; however, genetic and bio-acoustic data dictate that the three island populations deserve species status.

Taliabu Grasshopper Warbler Locustella portenta
Named for the Latin portendre – 'the predicted one – in reference to the fact Frank Rheindt first heard the bird, and recognised it as a new Locustella before it was observed. The species is only found in dwarf montane forest above 1,050 m on the western side of Taliabu, and differs vocally from its relatives on Sulawesi, Seram and Buru (currently considered a polytypic species by the IOC, Chestnut-backed Bush Warbler, but split by Eaton et al into three on the grounds of considerable bio-acoustic differences) is likely rare, with <15,000 ha of suitable habitat remaining.

Taliabu Myzomela Myzomela wahe
Named after the village of Wahe, the 'gateway' to the highest elevations of the island where it is most commonly found. Following new species of Myzomela from elsewhere in the Indonesian Archipelago (Alor Myzomela and Rote Myzomela from Alor and Rote respectively) in recent years, it's time for yet another of these small, attractive honeyeaters! This species was first found in 1991 by a University of East Anglia expedition led by P J Davidson and, almost 30 years later, has finally been described, being differentiated in plumage and genetics from Sulawesi and Seram Myzomelas.

Peleng Leaf Warbler Phylloscopus suaramerdu
This species has been named after the Bahasa Indonesian phrase suara merdu, which translates as 'melodious voice'. Restricted to the montane forest (>700 m) of western Peleng, this is one of two new leaf warbler species described by Rheindt et al. It is differentiated from closely related taxa by its white (rather than yellowish) supercilium and throat and different song. It is also noted, unusually, to climb along larger branches and trunks in the manner of a treecreeper.

Taliabu Leaf Warbler Phylloscopus emilsalimi
Named after Professor Emil Salim, former Minister of Environment of Indonesia, this species was (as with the myzomela) first noted by Davidson in 1991, and is here noted as occurring above 700 m. It is similar to Sulawesi Leaf Warbler, but differs in overall coloration and pigmentation, with obvious vocal differences. 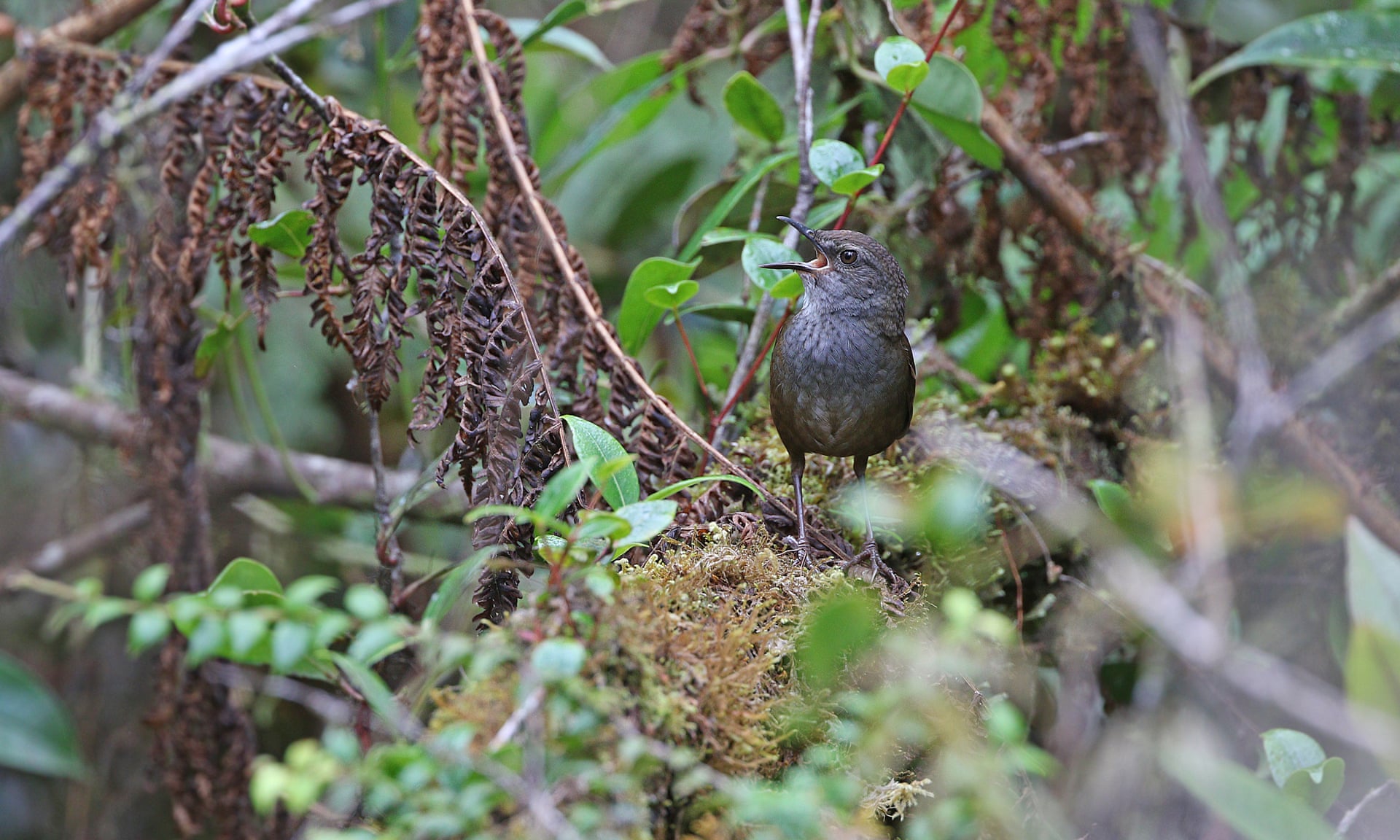 Taliabu Grasshopper Warbler was heard and recognised as a new Locustella species before Frank Rheindt set eyes on it (James Eaton/Birdtour Asia). 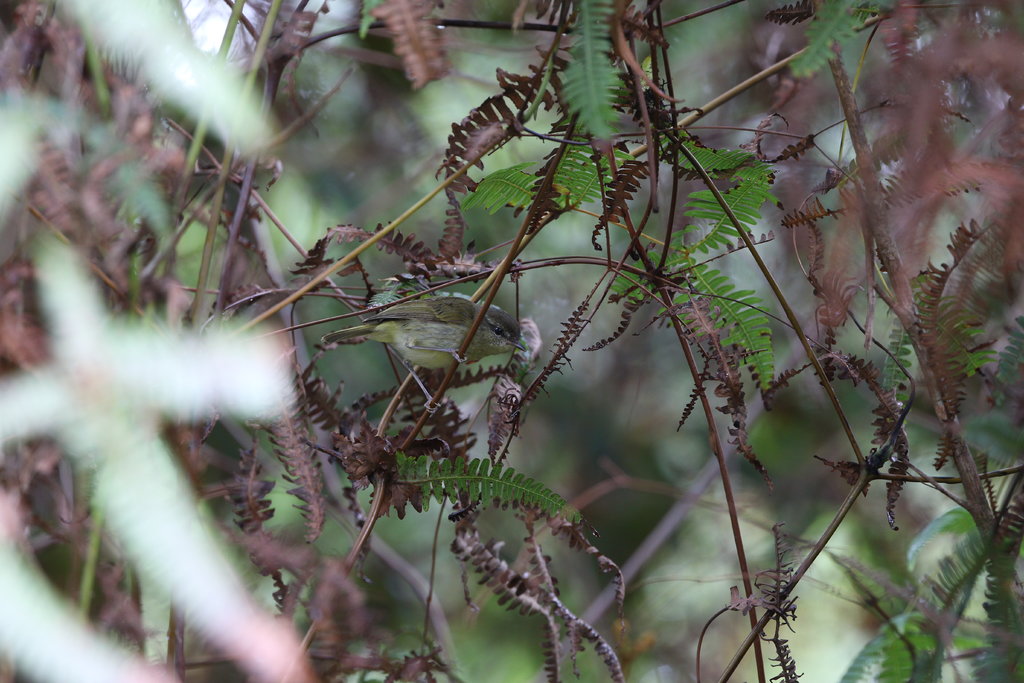 'Sula' Mountain Tailorbird Phyllergates cucullatus sulanus
Named after the Sula archipelago. The authors, following Eaton et al, refer to this species as 'Mountain Leaftoiler' in a nod to the fact it is a bush-warbler, not a true tailorbird. It is currently known only from Taliabu and is visually quite distinct from conspecifics, with a unique rufescent suffusion on the throat and breast.

'Banggai' Mountain Tailorbird P c relictus
Named for the Latin relinquere – 'the one left behind' – in reference to the small, isolated nature of this new taxon. Restricted to edge habitats and bamboo thickets from 750-1,000 m on Peleng, this new form is described as a subspecies based on the basis of unique coloration (it has considerably more extensive yellow on the belly than other Sulawesi taxa).

'Togian' Sulawesi Jungle-flycatcher Cyornis omissus omississimus
The name comes from omissus ('neglected'), peromissus from Selayar ('extremely neglected') and omississimus ('the most neglected') – who says taxonomists don't lhave fun with nomenclature! Known from islands in the Togian Archipelago, this new taxon is similar in plumage to the other two subspecies (as is typical for Cyornis). Despite being postulated as a new species in Eaton et al, the authors here choose to describe it as a subspecies due to a lack of differentiation in bio-acoustic and genetic metrics.

'Taliabu' Island Thrush Turdus poliocephalus sukahujan
In Bahasa Indonesian, suka hujan translates as 'it likes the rain'. This is yet another subspecies for one of the most vexed avian taxonomic complexes on earth. Already comprising some 50 subspecies of astounding phenotypic variation, sukahujan is described from Taliabu where, like most of its conspecifics, it favours highland forest above 1,050 m. Given plumage differences from neighbouring taxa (more closely resembling taxa in the Philippines), it may well merit species-level treatment when the Island Thrush complex is inevitably split.

'Taliabu' Snowy-browed Flycatcher Ficedula hyperythra betinabiru
As elsewhere in its range, this subspecies of Snowy-browed Flycatcher was found to be quite common in the understorey of montane forest on Taliabu. It is quite strongly differentiated in its female plumage which has bluish (rather than the brownish in most taxa) upperparts, making it closest to that on Buru (alifura), but the latter has a more rufous eyebrow and brighter rufous underparts. The name comes from betina biru, which translates as 'blue female'. 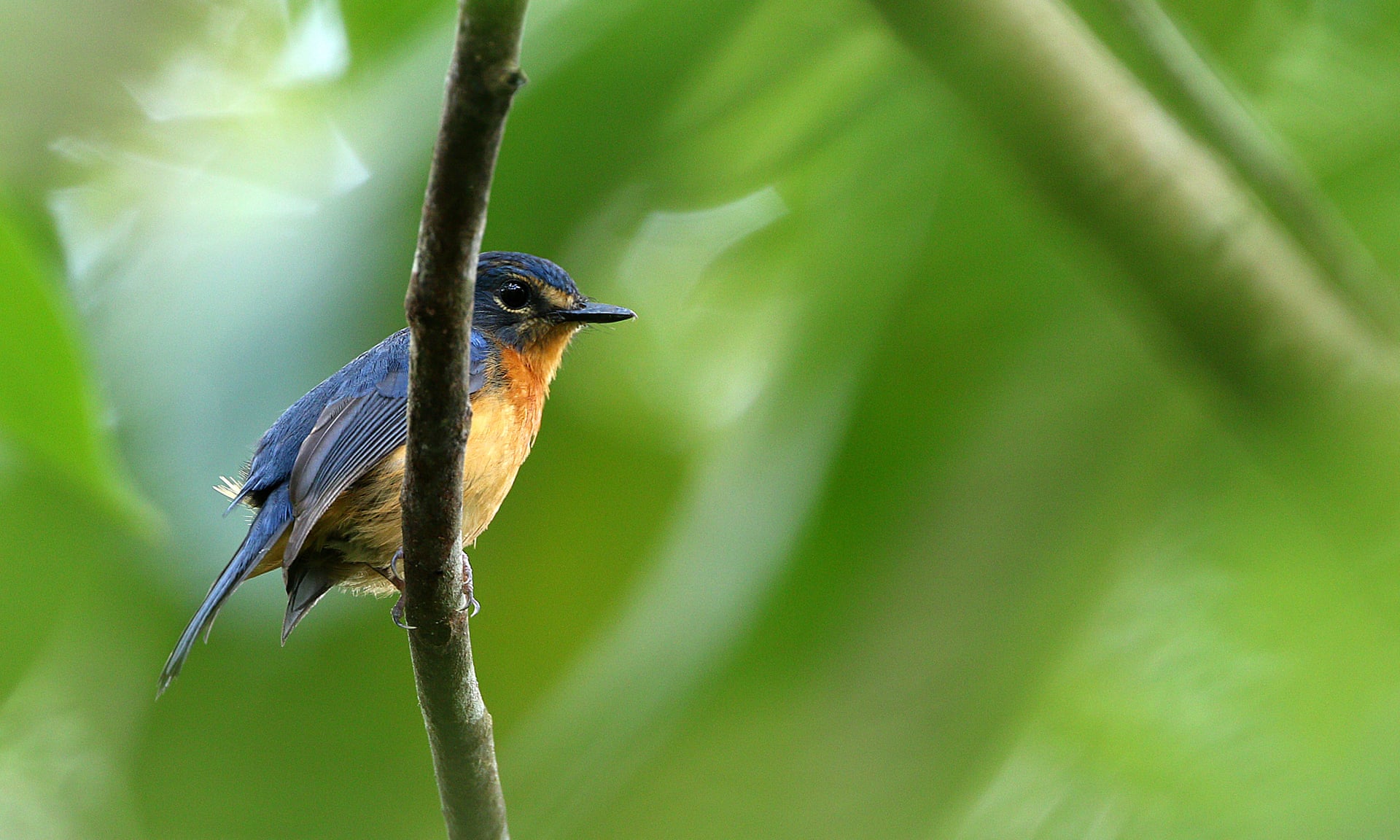 Females of 'Taliabu' Snowy-browed Flycatcher are bluish in colour, rather than the usual brown found in most subspecies (James Eaton/Birdtour Asia).

In a piece published alongside the study, Jonathan Kennedy from the University of Sheffield said that the discoveries highlight "the importance of documenting biodiversity today, given the environmental threats that could condemn many as yet unidentified taxa to extinction." With 20,000 islands in the Indonesian Archipelago, there are plenty of opportunities for discovery; if nothing else, Rheindt's work should serve as motivation for amateur ornithologists everywhere to visit remote regions and inspire discovery.