A comprehensive taxonomic revision of the subalpine warbler complex concluded that it contains three species-level taxa, with what was once considered one species eventually split into three: Western Subalpine, Eastern Subalpine and Moltoni's Warblers. All three warblers have been recorded in Britain and Ireland, although the third one is very rare. While distinctive as a group, identifying the birds to species level is a challenge. Andy Stoddart provides the information you need to recognise these three similar warblers should you be lucky enough to discover one in the field. 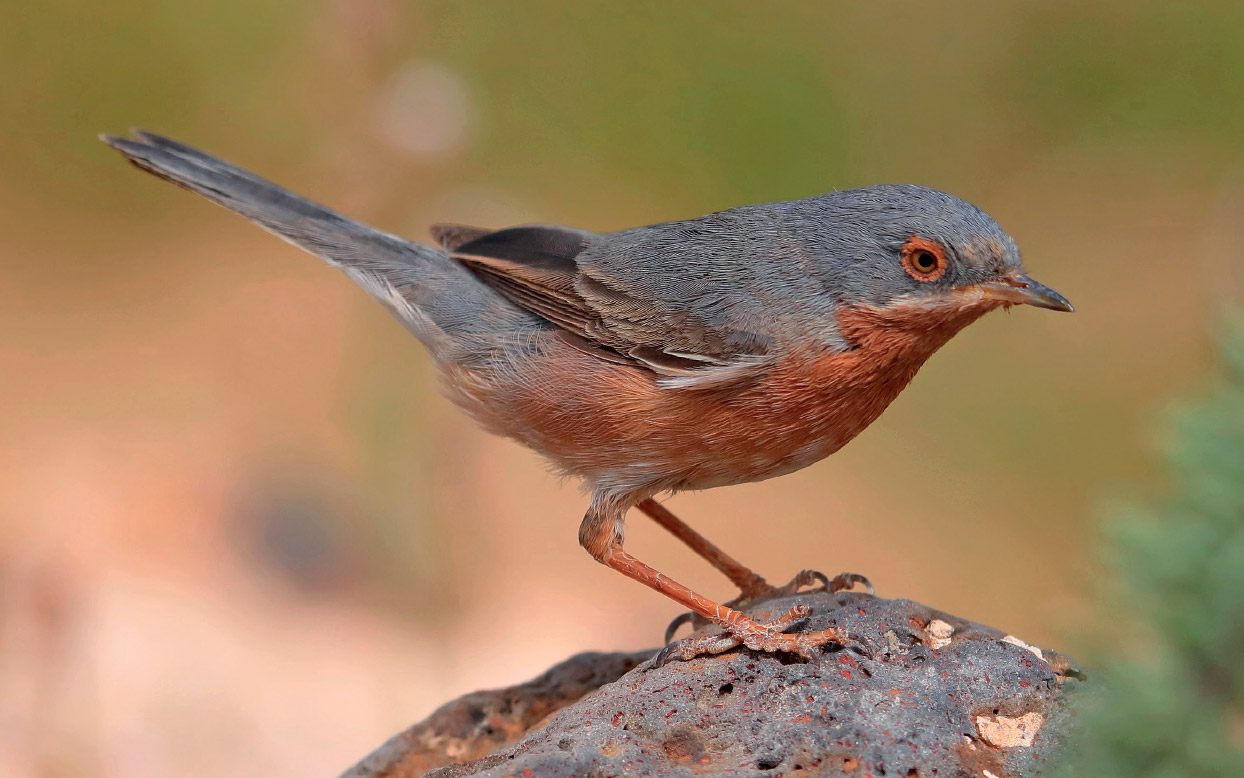 Male Western Subalpine Warbler (Fuerteventura, Spain, 25 February 2020). Male subalpine warblers are both beautiful and a challenge. They can be enjoyed simply for their attractive colours or studied more closely to attempt to identify them to species. This bird, photographed in the Canary Islands, will be a Western Subalpine based purely on its location, but the wholly orange-hued underparts support this identification (Bill Baston).

'Subalpine Warbler' is a delightful small warbler of the Mediterranean region, where it typically favours scrub interspersed with taller bushes on dry slopes. It is a summer migrant, returning in March and April from its winter quarters in Africa.

It has traditionally been treated as a single species, although significant variation in plumage and calls across its range has long been recognised and multiple subspecies have been described. In recent years, these subspecies have come under increasing scrutiny and, assisted by evidence from genetic analysis, their true distinctiveness has been revealed.

These taxonomic changes have, in turn, required some nomenclatural adjustments, and the whole complex, along with many other former Sylvia warblers, has been transferred into the new genus Curruca. The 'Subalpine Warbler' complex now comprises three 'cryptic' species, as follows:

Subalpine warblers are annual vagrants to Britain in small numbers and are regular enough to represent a highly viable bird-finding target. Most records are in spring (but there are also a good number of autumn birds) and the majority occur in coastal counties, with the south and east coasts (as far north as Shetland) most favoured.

All three of the newly split species occur here, but establishing the numbers of each in the historical record is problematic with many not sufficiently documented to be identifiable and so treated simply as 'Subalpine Warbler species'. The official statistics for 1950-2019 show 20 Westerns, 103 Easterns and 10 Moltoni's, as well as 735 unidentified 'Subalpine Warblers'.

These figures are inevitably less than definitive and almost certainly do not give an accurate picture of the relative status of each species. Moltoni's Warbler seems to be genuinely rare, but the true proportions of Western and Eastern Subalpines are likely to be more evenly balanced than the statistics suggest.

Subalpine warblers as a group are relatively easily identified. They are small, a little smaller than a Lesser Whitethroat, and more compact and short tailed, with paler ear coverts and brownish-pink legs. Spring males are grey above and reddish below (albeit variable in colouration and extent), with red orbital and eye-rings and a white submoustachial. Autumn adult males have fresh whitish feather tips in the underparts which partially obscure their colour and make them appear more pink. Females and first-year birds are dull and brown above and whitish below, slightly greyer around the head, with a reddish orbital ring and whitish eyering. Some adult females in spring have more peachy underparts and can even show a weak white submoustachial.

However, the recent taxonomic developments have led inevitably to greater identification difficulties. As a result, new criteria have been developed, previously understood criteria revised and the thresholds for certain identification and official acceptance raised.

A firm identification to species level is now very challenging and only the most distinctive spring males are likely to be identifiable in the field. The British Birds Rarities Committee now requires submissions of males in spring to contain two of the following: details of the underparts colouration, a photograph of the pattern of the second outermost tail feather (T5), and a description or (preferably) a recording of the call. For females and all birds in autumn, submissions should include both the tail pattern details and call. Even so, these features are all somewhat variable and the occasional 'anomalous' individual can be found. In all cases, however, DNA analysis can provide a certain identification.

Inevitably, many 'Subalpine Warblers' will have to remain unidentified to species. Nevertheless, this should not be a deterrent to looking at each one carefully and noting as many features as possible. The currently understood identification criteria for spring males of each species (ranked approximately in order of importance) are as follows: 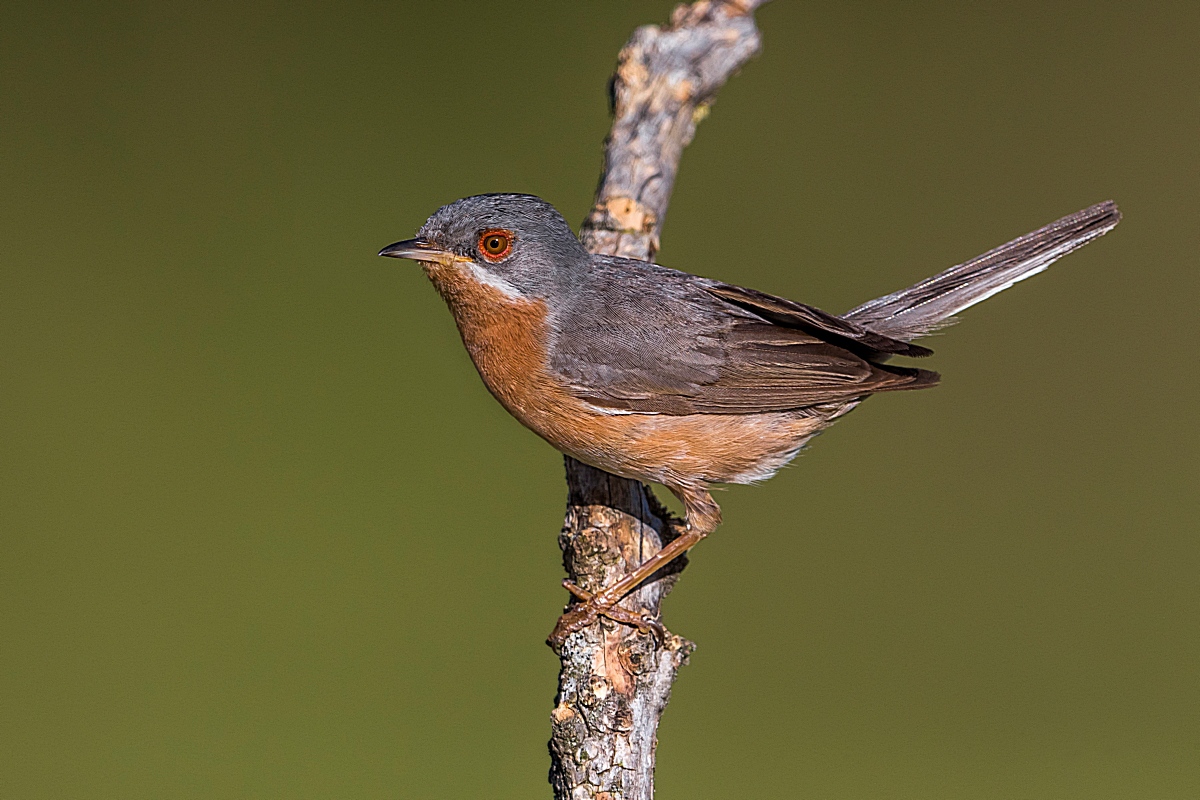 Male Western Subalpine Warbler (Provence, France, 3 July 2016). Just as with the bird in the top image, this individual shows wholly orange-hued underparts with no obvious contrast between the throat/upper breast and the rest of the underparts. Other pro-Western Subalpine features are a relatively weak white submoustachial stripe and a short primary projection. Of course, the French location provides further confidence in the identification (Daniele Occhiato / www.agami.nl). 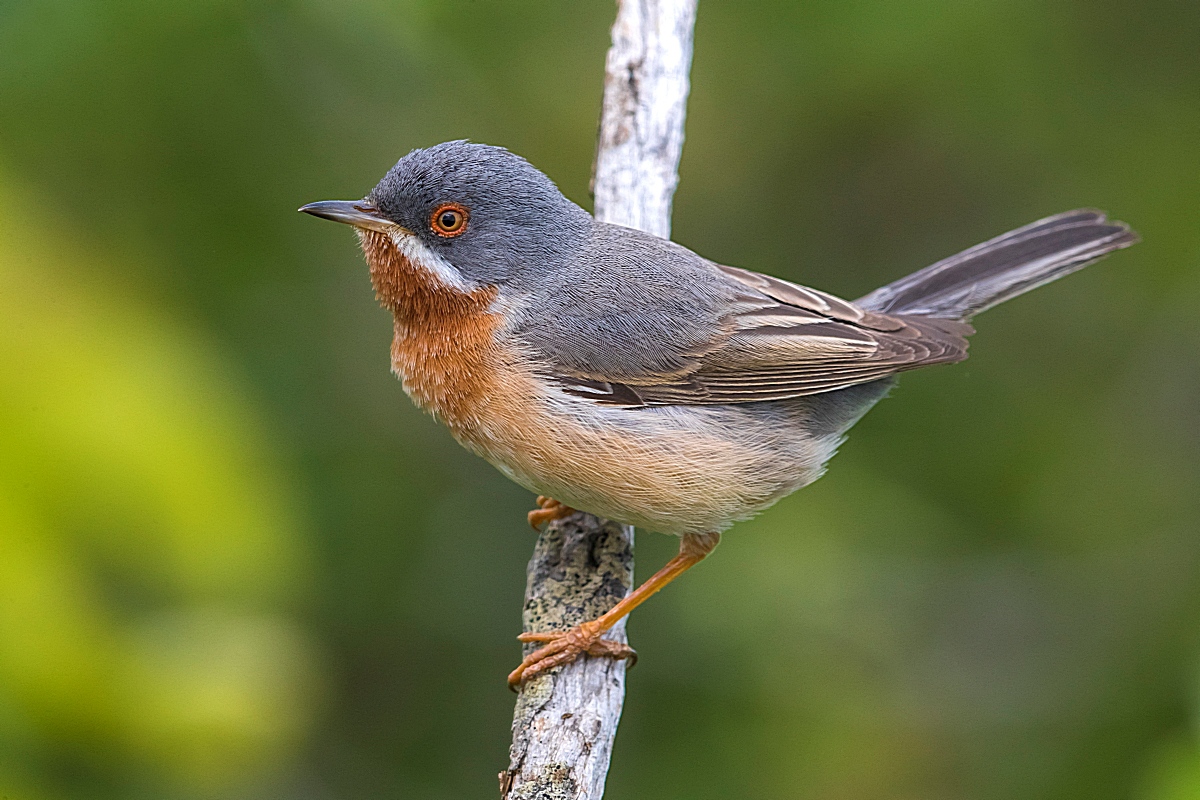 Male Eastern Subalpine Warbler (Tuscany, Italy, 18 April 2017). This bird differs most obviously from that in the image above in the strong and quite obvious contrast between the intensity of the colour of the throat/upper breast and that of the flanks, with the former very deeply coloured and the latter only faintly washed. In addition, the underparts are a deeper brown-red, slightly less orange. Further indicators of Eastern Subalpine are the relatively bold white submoustachial stripe and a long-looking primary projection. The known location means that it is possible to assign this bird to the subspecies cantillans, an identity also suggested by the weak flush of colour in the flanks (Daniele Occhiato / www.agami.nl). 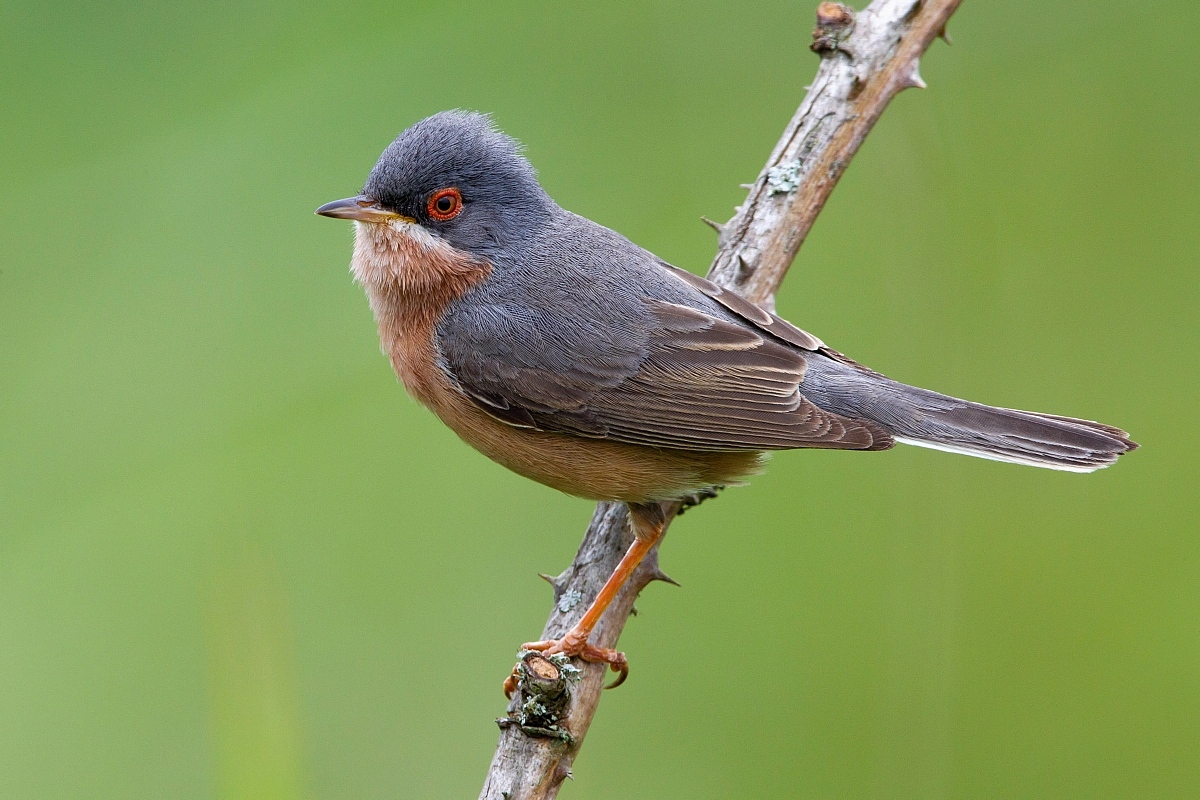 Male Moltoni's Warbler (Tuscany, Italy, 24 April 2011). The most striking feature of this bird is the salmon-pink colour of the underparts, these also lacking any strong contrast between the throat/upper breast and the flanks. This distinctive colouration suggests Moltoni's Warbler, an identification supported by the relatively weak white submoustachial stripe and, of course, by the Tuscan location, where this species breeds alongside Eastern Subalpine (Daniele Occhiato / www.agami.nl). 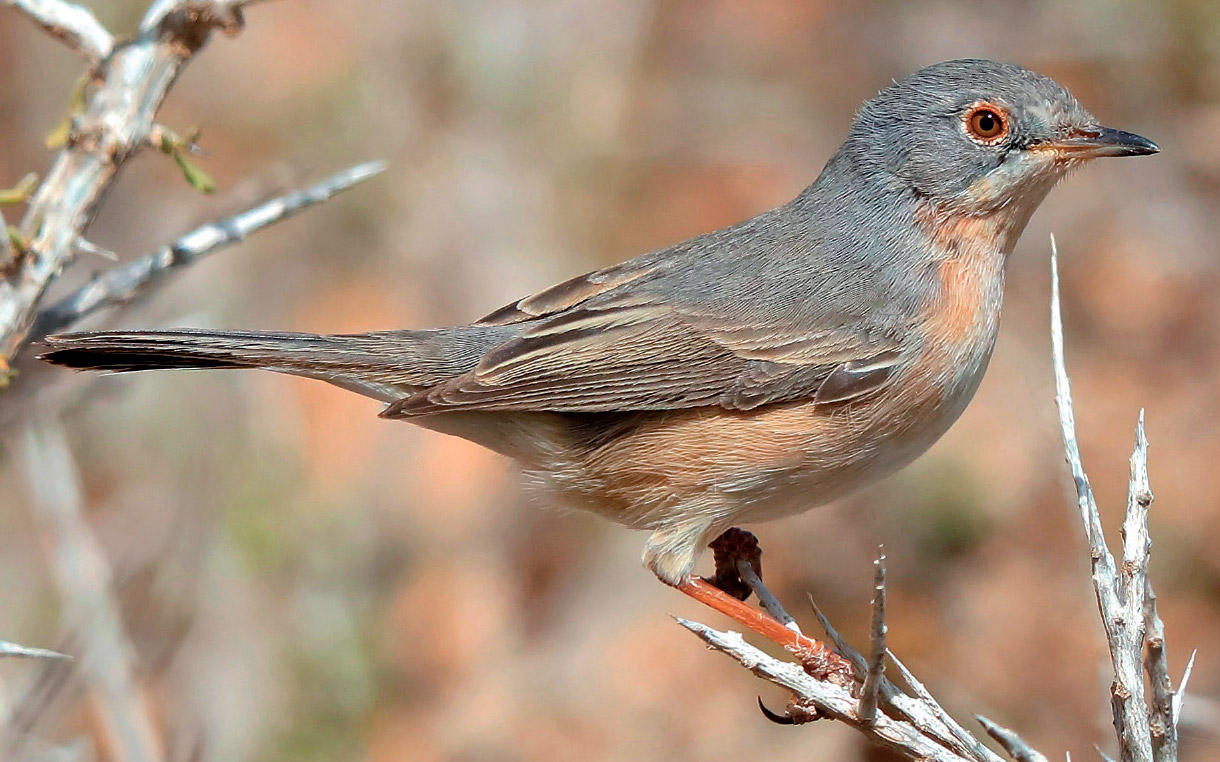 Female Western Subalpine Warbler (Fuerteventura, Spain, 25 February 2020). This bird is a bright female with peachy hues extending onto the throat and highlighting a weak pale submoustachial stripe. There are few clues here to its specific identity, but the Canary Islands location indicates that it will almost certainly be a Western Subalpine (Bill Baston). 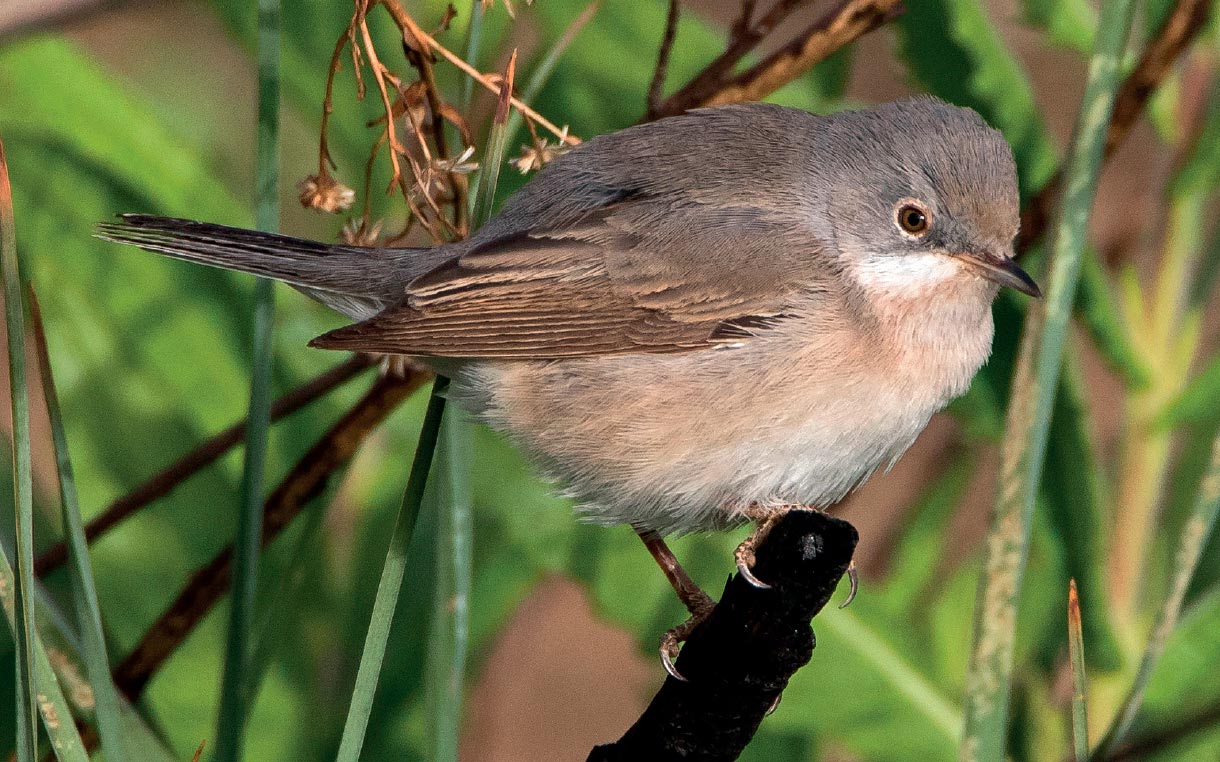 Female Eastern Subalpine Warbler (Anarita, Cyprus, 25 March 2016). This bird shows the typical 'non-adult male' features of the subalpine warbler group: a 'soft', pale face with no darkening in the ear coverts, pale legs, a reddish orbital ring and whitish eyering and peachy hues in the underparts. Identifying it to species from this image is, however, impossible, although the location should provide sufficient confidence that it is an Eastern Subalpine (George Reszeter). 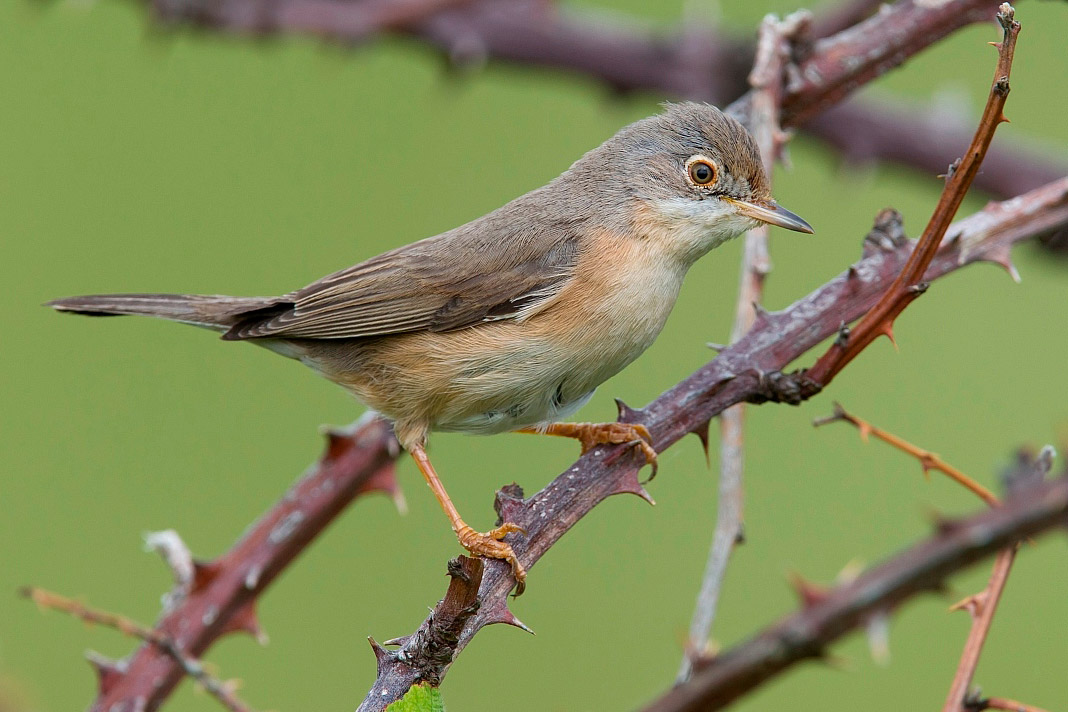 Female Moltoni's Warbler (Pisa, Italy, 23 May 2012). This bird appears very similar to that in the previous and is not identifiable to species based on this image alone. However, the photographer tells us that it is a Moltoni's Warbler and it is photographed within the breeding range of that species (Daniele Occhiato / www.agami.nl). 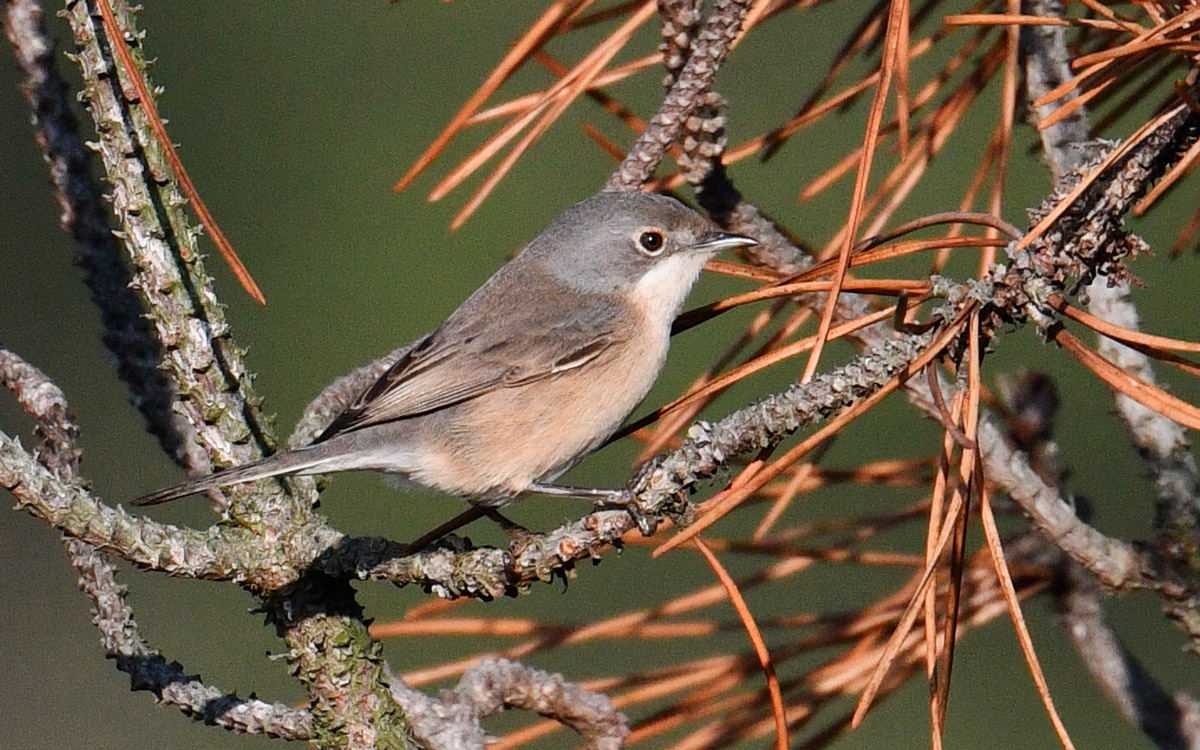 First-winter Western Subalpine Warbler (Sagres, Portugal, 21 September 2020). This bird has darker legs than the individual in the previous image and so looks a little more Lesser Whitethroat-like, but note again the pale ear coverts, reddish orbital ring and white eyering which identify it as a subalpine warbler. Assigning it to species is, however, impossible from this image, although its location helps, making a Western by far the most likely option (Laurens Steijn / www.agami.nl). 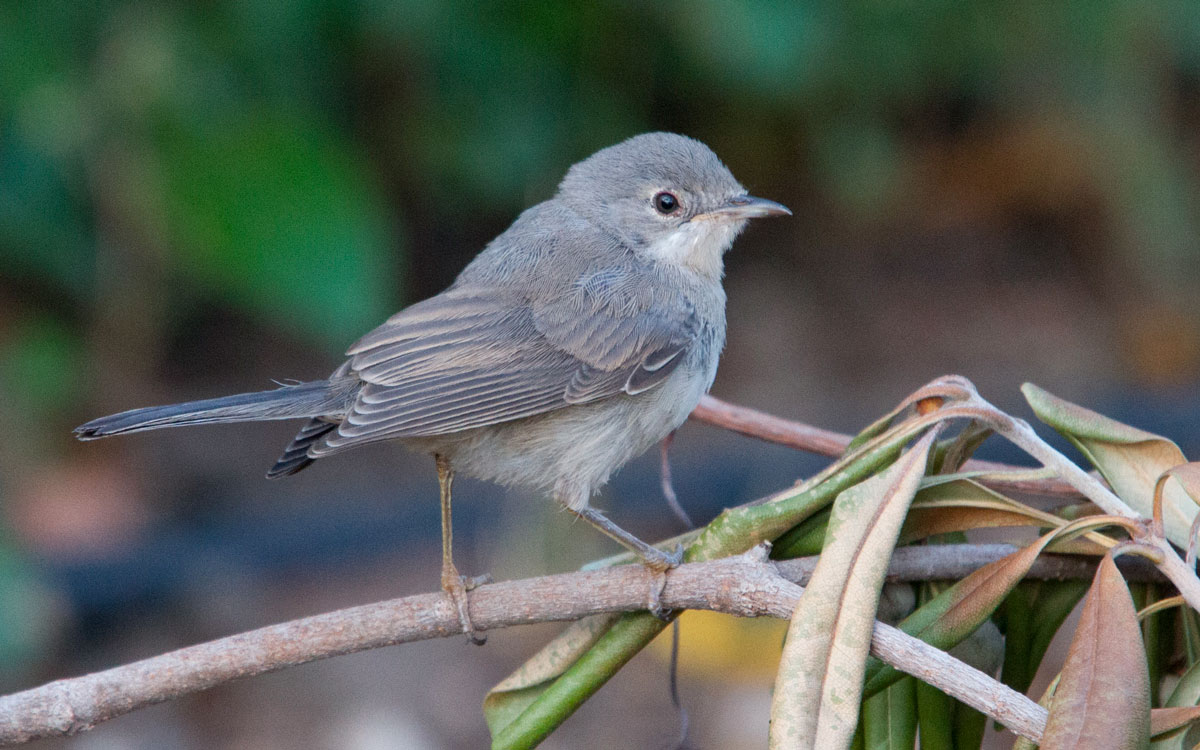 Juvenile Eastern Subalpine Warbler (Lesvos, Greece, 19 June 2017). This bird is in full juvenile plumage, although its first-winter appearance will be little different. Although clearly a subalpine warbler, identifying it to species from this image is problematic. However, the location clearly shows it to be an Eastern Subalpine and we can also assign it on this basis to the eastern subspecies albistriata (Menno van Duijn / www.agami.nl). 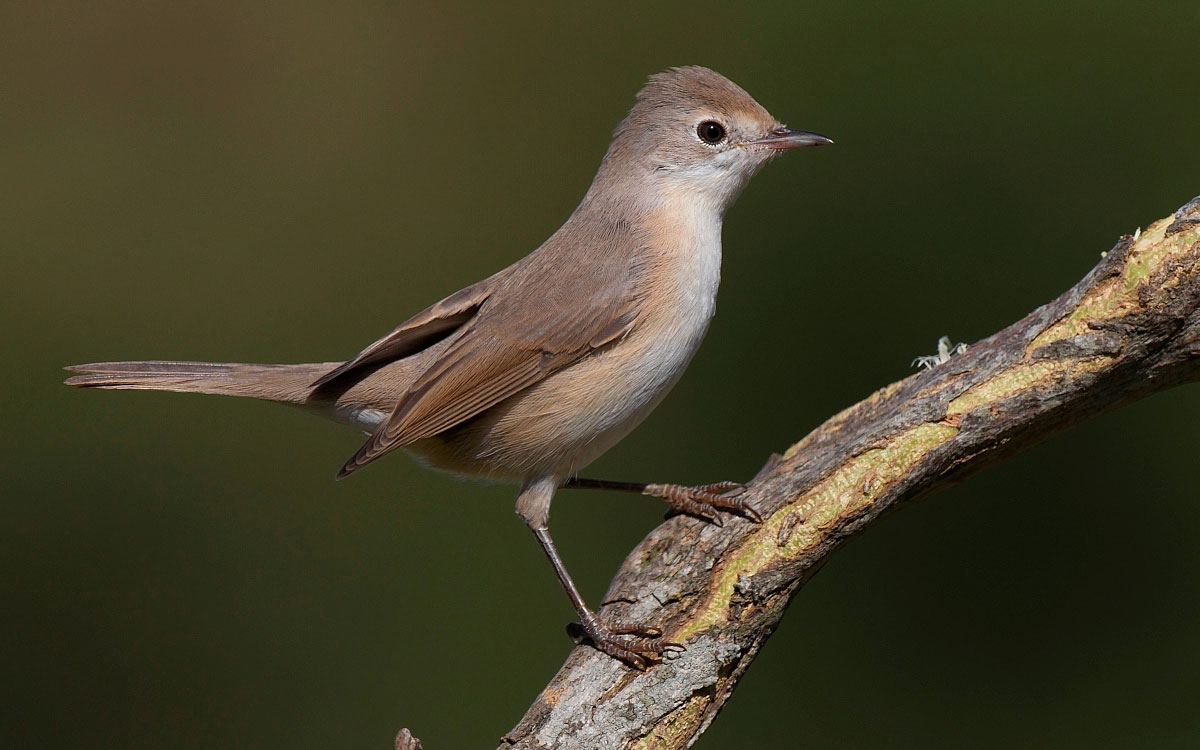 First-winter Moltoni's Warbler (Tuscany, Italy, 2 September 2010). This rather plain-looking and dark-legged young bird is again not identifiable to species from this image, but the photographer has identified it as Moltoni's Warbler and the location lies within the breeding range of that species (Daniele Occhiato / www.agami.nl). 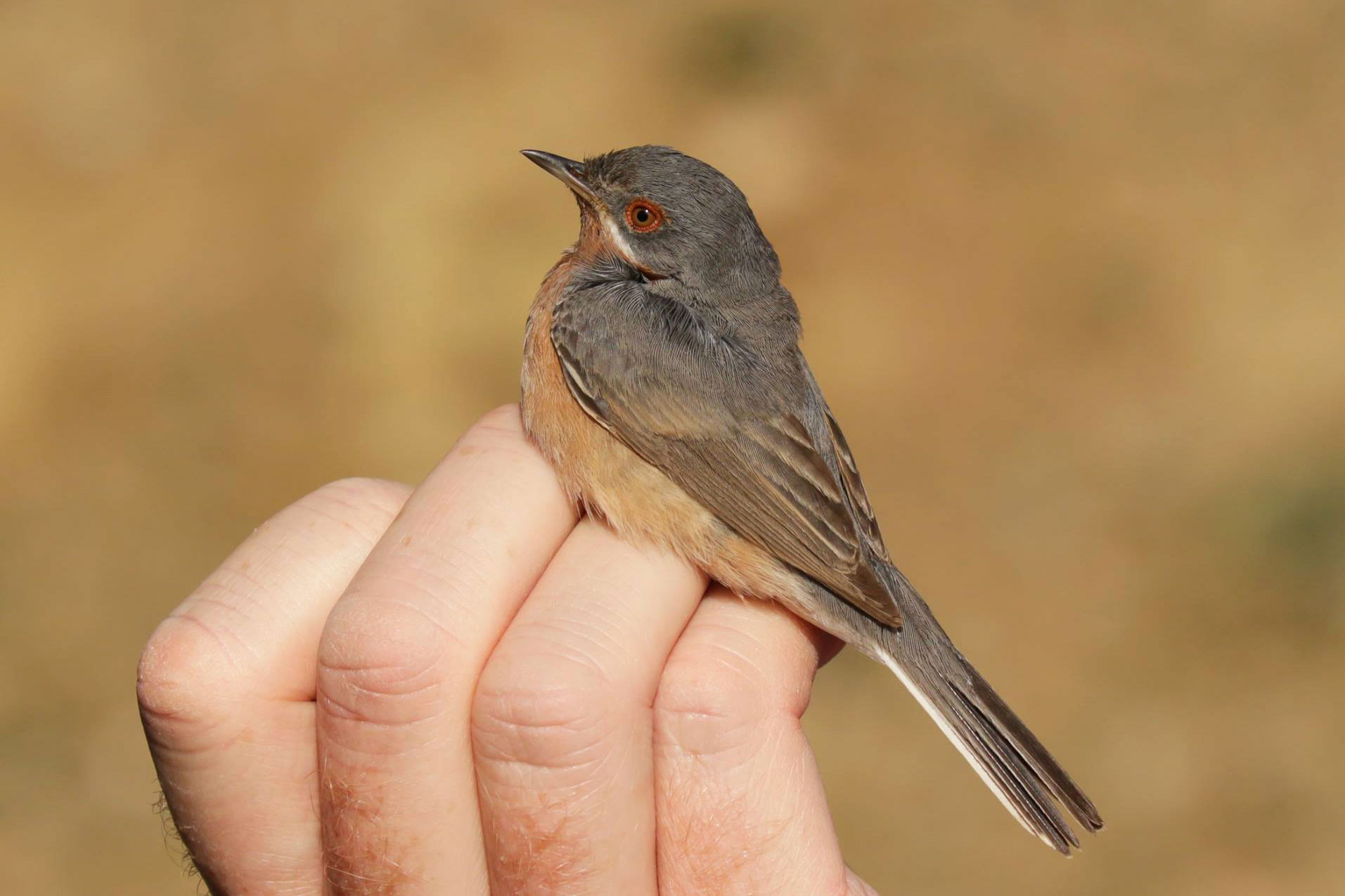 Male Western Subalpine Warbler (Fair Isle, Shetland, 9 May 2016). The lovely warm brick-orange hues in the underparts of this male immediately suggest a Western Subalpine. Note also the lack of contrast between the throat/upper breast and the rest of the underparts, the narrow, weak white submoustachial stripe and the relatively short primary projection, all of which provide extra confidence in the identification (Lee Gregory). 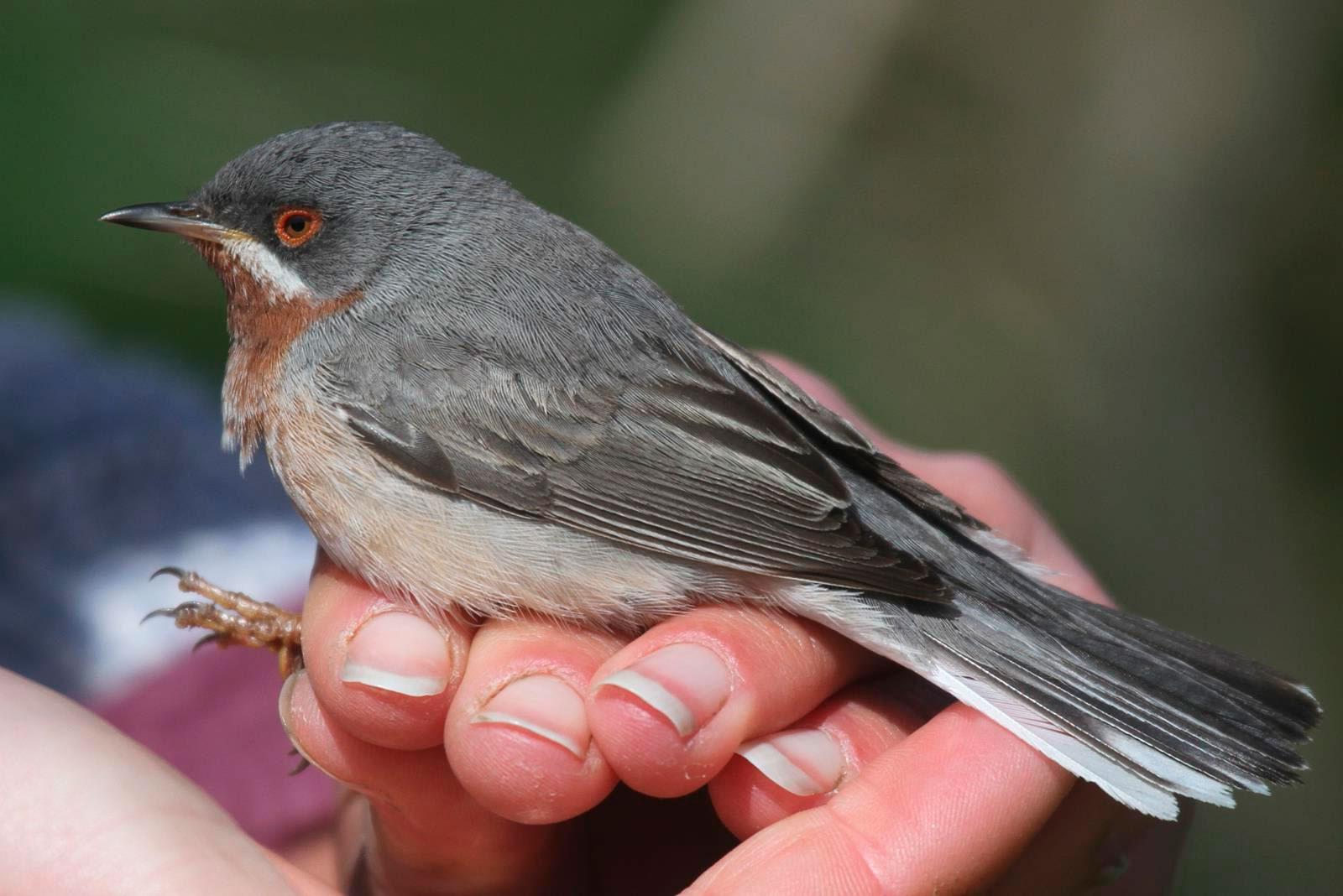 Male Eastern Subalpine Warbler (Skokholm, Pembrokeshire, 25 April 2015). This male shows a dramatic contrast between the dark throat/upper breast and the almost colourless flanks – a key feature of Eastern Subalpine. The almost white flanks suggest that it might belong to the eastern subspecies albistriata. Other strong pro-Eastern Subalpine features are the broad white submoustachial stripe, relatively long primary projection and, importantly, an obvious white 'wedge' extending up the shaft on the second outermost tail feather (Richard Brown). 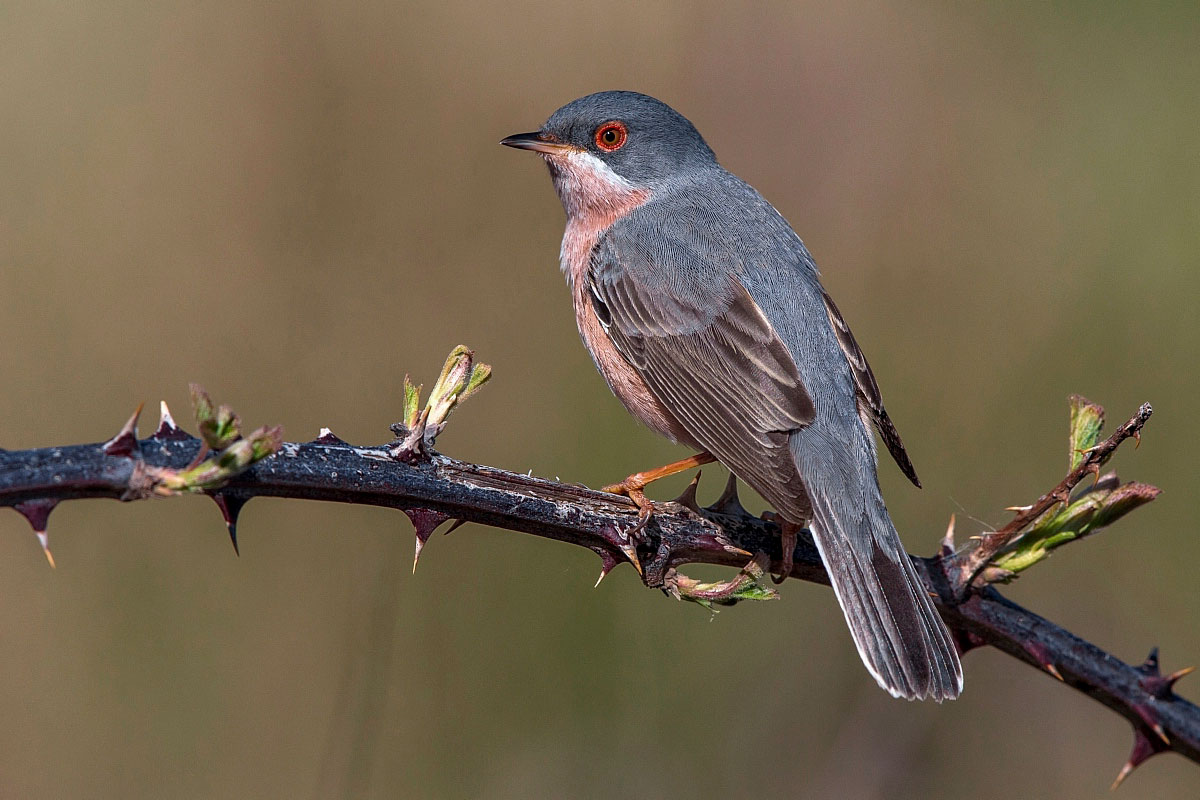 Male Moltoni's Warbler (Tuscany, Italy, 16 April 2013). The beautifully soft rose-pink underparts of this bird immediately suggest Moltoni's Warbler. Although barely visible in this image, this bird would show a square white tip to the second outermost tail feather (with no white 'wedge' extending up the shaft). This feature eliminates Eastern Subalpine, but is shared with Western (Daniele Occhiato / www.agami.nl).