Spring surveying around the corner!

It's here again, already! But at the same time — not a moment too soon — spring has sprung! Sand Martins, Northern Wheatears and Ospreys are arriving in the UK from their wintering grounds in Africa. Long-tailed Tits are nest building, Ravens already incubating full clutches, Dunnocks singing everywhere; it's definitely time to start thinking about spring/summer surveying and continuing to keep track of our breeding birds.

Spring is such an exciting time of year. Personally, I cannot wait to hear my first Sedge Warbler of the year singing, a particular favourite of mine after a childhood spent in their favourite prime habitat, the sedge and reedbeds of Rye Meads, Hertfordshire. Another species I will be checking the fence lines and shrub-tops for in a month's time is Whinchat, a species in real trouble and, unsurprisingly, harder and harder to catch up with each year down here in the south-east, and no doubt elsewhere too. 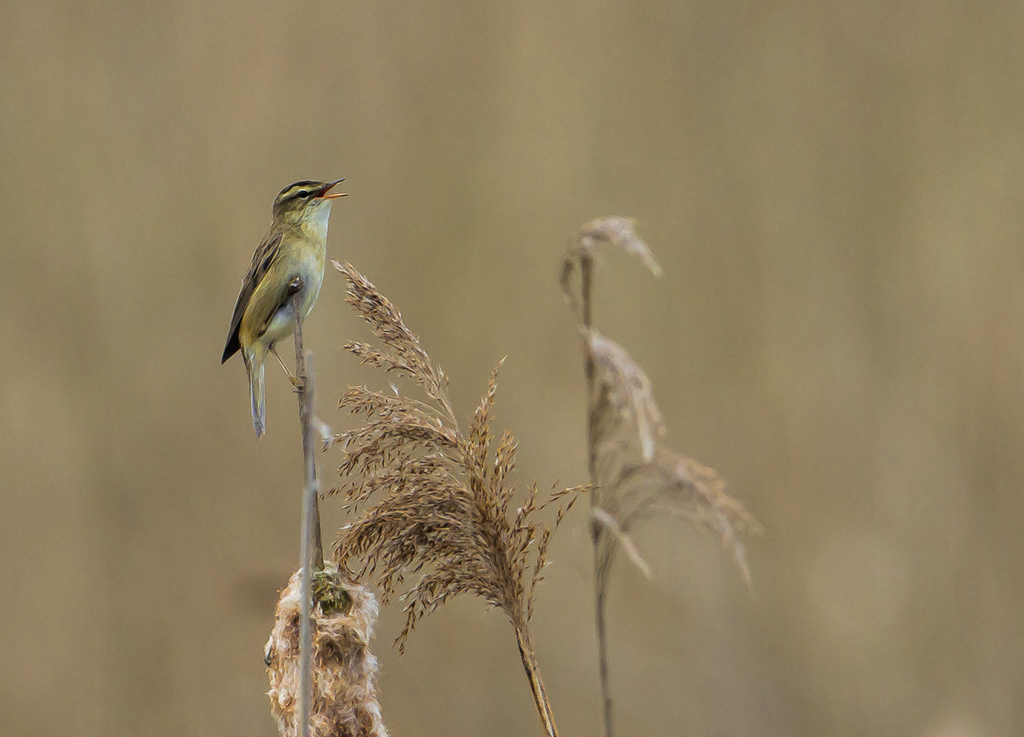 We know Whinchats are in real trouble: they have declined by 54 per cent in the UK since 1994, as recorded by the BTO/JNCC/RSPB Breeding Bird Survey (BBS). Pre-BBS, a contraction in range was noted mainly in lowland England, thought to be partly due to agricultural intensification. Since then, populations have been mostly restricted to marginal upland areas, sandwiched between intensively managed farmland and higher land, which is either too exposed for Whinchat to breed or contains unsuitable habitat such as mature conifer forests. The only substantial lowland population of Whinchats remaining in England occurs on Salisbury Plain, Wiltshire, a large expanse of unimproved grassland that has escaped agricultural development due to its role as a military training ground.

This species is a long-distance migrant, spending the winter months in the humid zone of West Africa. Species such as Turtle Dove and Pied Flycatcher also winter here, both of which have also declined, by 91 per cent and 60 per cent respectively since 1994. Therefore, issues en route to and at wintering grounds could potentially be influencing population changes for these species. Whinchat and Pied Flycatcher joined Turtle Dove on the Birds of Conservation Concern 'Red' List, as a species of high conservation concern in 2015. 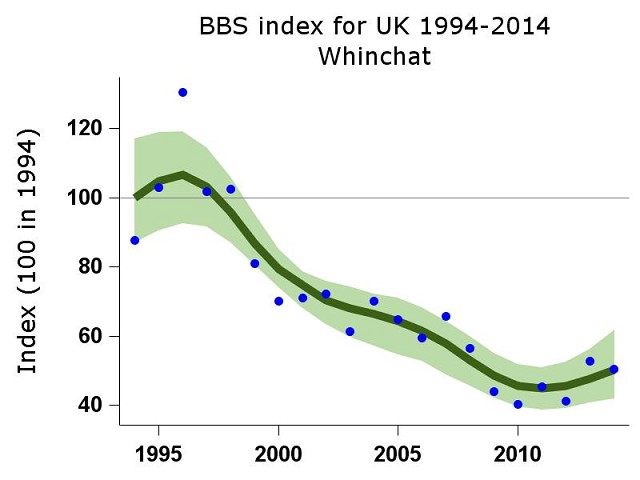 The Sedge Warbler population, however, appears more stable, with year-to-year fluctuations, thought to be influenced by adult survival rates which, in turn, are partly related to changes in rainfall on their wintering grounds, in the arid area just south of the Sahara Desert in the West African Sahel.

We know this because the BBS has been monitoring population changes since 1994 and now we are able to produce trends for 110 species in the UK. This has been vital for many reasons, from directing further research into specific species and finding out more about the reasons behind these changes as discussed for the species mentioned here. BBS also influences policy, measures progress, and influences where species sit on the Birds of Conservation Concern lists. Data are also supplied for other, often species- or area-specific research purposes. It is a hugely important survey for bird conservation, and one we would like to welcome more surveyors to!

The BBS is not a high-intensity survey — it requires just two or three visits to a randomly allocated (local) 1-km square to record the birds seen or heard along two transect routes through that square. A recce visit before the surveys to check the routes and record habitat data is recommended. About an hour is then needed to enter the data online. Surveys are carried out at dawn, leaving plenty of time after the surveying to go birding or twitch that local rarity (if you've not already found one, on your BBS square!). To sign up to take part, or simply find out more, please visit www.bto.org/volunteer-surveys/bbs and press on the 'Sign up for BBS' button!

The Breeding Bird Survey is run by the British Trust for Ornithology (BTO) and jointly funded by the BTO, Joint Nature Conservation Committee (JNCC) and the Royal Society for the Protection of Birds (RSPB). We are hugely grateful to the 2,600 volunteers already taking part in the survey. Thank you. BBS has been running since 1994 and, when combined with data from its predecessor survey the Common Birds Census, it is possible to calculate trends from 1966 for many species. See the BTO BirdTrends (www.bto.org/birdtrends) pages for more information.