Spring is on its way!

Spring may be a little way off, but with this exciting project we can see it coming — literally! At the end of January, David the Cuckoo decided the time was right to head north. After a silence of 10 days, locations received on 30th January show that he had left the Democratic Republic of Congo and travelled 980 km (608 miles) northwest over the block of more-or-less continuous closed-canopy forest of the Congo Rainforest. This was the biggest movement we had seen from any of the Cuckoos for some time. He has started his migration back to the UK about a week earlier than the first bird last year.

Transmissions on 2nd February show that David had continued a further 128 km (80 miles) northwest from his last transmitted position on the 30th January. He had continued further into the savannah with gallery forest to the north of the huge Congo rainforest block and is now in the Nana-Mambéré region in west Central African Republic. There were no further transmissions from David until the early hours of 16th February. He was 230 km (142 miles) southwest of his previous location in the Central African Republic and had moved back from the gallery forest–savannah mosaic to a large area of continuous closed-canopy forest. A further update from David on 20th February showed that he had made another move northwards. He is still currently in Cameroon but has travelled 97 km (60 miles) slightly west of north from his last location.

The most recent signal from Chance showed that he is now in Ghana, having headed west-northwest from his previous location in Cameroon. The best location placed him 67 km (41 miles) east of Yegi, a major crossing point on the Volta, although subsequent locations and sensor data suggest that he was probably still moving westwards at that time. This is a movement of more than 1500 km (935 miles) almost due west and makes Chance the first of the tagged cuckoos to have arrived in the Ghana/Ivory Coast region, which all remaining cuckoos used as a stopover before crossing the Sahara last spring. 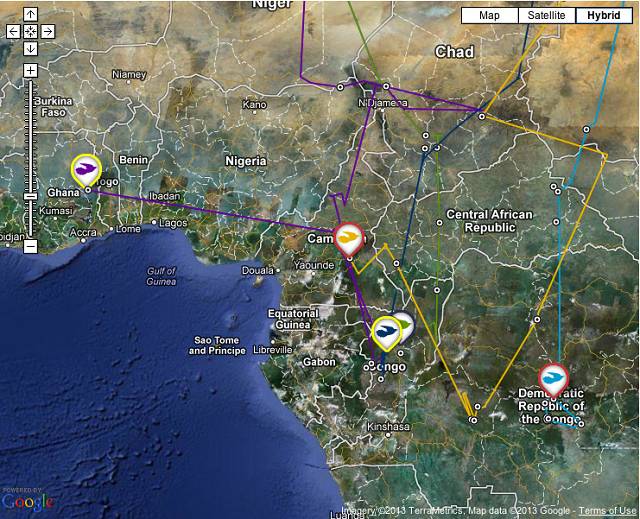 A series of locations received early on 19th February from Lloyd's tag showed that he is on the move too! He has travelled 210 km (130 miles) northwest within the Democratic Republic of Congo since Saturday 16 February. This appears to be the beginning of his northwards movements and, although it's only a short movement, suggests that he may well be heading to West Africa like last year's cuckoos, despite wintering so far east.

Both Chris and BB remain in Congo, at the north end of the Téké Plateau, and have shown no sign of moving north yet. We last received a location for BB's tag on 19th February and for Chris's on 18th February. Currently just 85 km (53 miles) separates the two of them.

BTO Cuckoo project's Rachel Gostling said: "It is fantastic to watch this year's tagged Cuckoos making their way back to the UK, and to see that summer is on its way. Since we started tracking Cuckoos we have discovered loads of new information about their migration and it's going to be interesting to see if these birds in the second year of the project confirm what we saw from the Cuckoos last spring. Perhaps they will surprise us yet again and reveal more pieces of the Cuckoo behaviour jigsaw. Anyone can follow the Cuckoos as they undertake their incredible journeys by visiting www.bto.org/cuckoos to see where they are now."