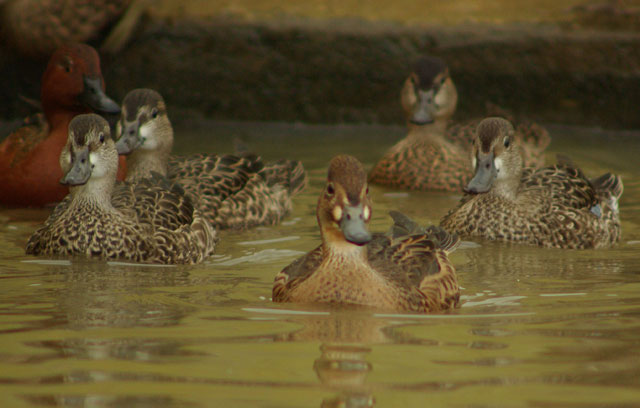 Three species of Teal in captivity: Slimbridge, Glos, January 2007
Three species of Teal are represented here, and all in the trickiest of plumage types: 1st-winter female plumage. At the front the peaked crown, rather rufescent tones, lightly spotted breast and strong face pattern of a Baikal Teal. Immediately behind, the three birds with much colder tones and striking bright white loral spot are Blue-winged Teal. Trailing at the back, similar to the Blue-winged Teal but warmer-toned with less obvious loral spot, a single young female Cinnamon Teal (photo: Martin Garner).

The Blue-winged Teal has a breeding range extending right across North America from southern Alaska and British Columbia to southwest Newfoundland, south to northern Texas. It is a long-distance migrant, wintering as far south as northern Argentina and Chile (Rohwer et al. 2002). The Cinnamon Teal has a much more restricted breeding range in the western North America from southern British Columbia, southern Alberta and SW Saskatchewan, south to Northern California. It is also a shorter-distance migrant than the Blue-winged Teal with some overlap between southern breeding areas and northern wintering areas, wintering from California, south to Central America with occasional records from northern Columbia, Venezuela and Ecuador (Gammonley 1996).

Blue-winged Teal is a well-established vagrant to the Western Palearctic. Up until the end of 2006 there have been approximately 300 accepted records in the UK. There is a western bias to autumn records, but spring records can occur anywhere, which is usually considered to validate the hypothesis that these are birds which arrived the previous autumn, wintered in S Europe/N Africa and are now heading north on spring migration. As the species is commonly kept in waterfowl collections, the issue of escape likelihood does arise; however, the recovery of an immature male bird ringed in New Brunswick and shot in Suffolk on 9th October 1971 demonstrates that many are likely to be genuine vagrants.

In contrast, the Cinnamon Teal has yet to be accepted as a genuine vagrant in the Western Palaearctic by national committees. With the recent increase of vagrant birds occurring in Britain with an essentially west North American distribution, it seems entirely possible for the occasional Cinnamon Teal to reach Western Europe. There are many sight records across eastern North America (Sibley 2000) including records from Quebec, Nova Scotia, and New York (Gammonly 1996, Palmer 1976). Vagrants have also reached Hawaii to the west (Madge and Burn 1988). An adult male Cinnamon Teal at Loch Tuamister, Lewis, Outer Hebrides from 13th May to 16th June 2004 was only accepted onto Category E of the British List, but the possibility of it having been a genuine vagrant, with an exceptional supporting cast of other wildfowl of North American origin in the same spring (Scott 2004), is very real. Between 1990 and 2004 between 25 and 35 Cinnamon Teal were reported 'in the wild' in Britain, an average of about 3 per year (anon 2004). A number of these include long-staying and even breeding individuals, obviously suggesting that these involve escapes. However, it is important as with all potentially vagrant wildfowl that each record is viewed both from the wider perspective of occurrence patterns as well as on its own merits.

The remarkable similarity between female Cinnamon and Blue-winged Teal, and the obvious identification pitfalls, were the first dealt with by Ian Wallace and Malcolm Ogilvie in British Birds in 1977. At that time Cinnamon Teal was only considered to be a problem escape and not a potential vagrant. The only record of a Blue-winged Teal to be ringed in Britain further vividly illustrates the difficulty of identifying these species. This bird, ringed as an unaged male at Abbotsbury Swannery, Dorset on 23rd October 1979, was subsequently shot at Hautebut, Somme, France on 22nd February 1981 as an adult male Cinnamon Teal! Clearly this individual could also arguably have been a genuine vagrant rather than an escape. 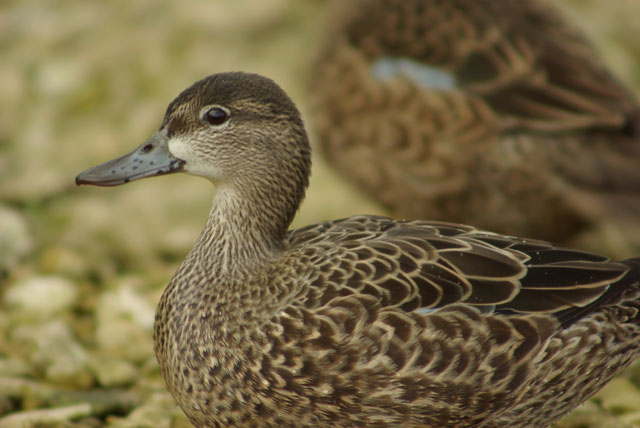 Blue-winged Teal in captivity: Slimbridge, Glos, January 2007
The facial pattern is the most striking part of the bird's plumage, marked as it is by a striking white loral spot, prominent whitish eyelids and coarse streaking over the face, but lacking dark cheek bar as normally found on Garganey. The bright sky-blue of the forewing is just visible (photo: Martin Garner). 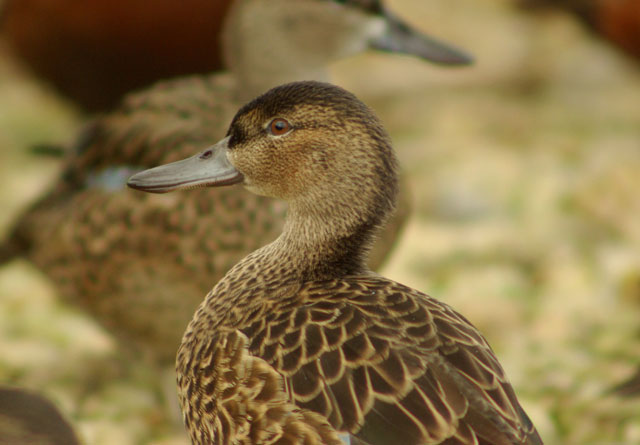 First-winter female Cinnamon Teal in captivity: Slimbridge, Glos, January 2007
Compared with the Blue-winged Teal, at close range the plumage tones are considerably warmer and the facial pattern blander. The loral spot is barely present here and the dark eye stripe thinner and petering out before the dark nape feathering. Notice how deep mahogany coloured the iris appears. This is only apparent at close range, but on Blue-winged Teals the iris is duller grey-brown (photo: Martin Garner).

Cinnamon Teal averages slightly larger than the Blue-winged Teal (though this is likely to be of little use in the field). More importantly the bill of Cinnamon Teal is typically about 10% longer and often has the appearance of a miniature 'Shoveler' bill due to greater length, expanded tip, overlapping bill flanges and corresponding slightly more pinched-in appearance towards the base.

The main features for distinguishing the species in juvenile and female plumage are to be found in the head pattern.

The differences in the head pattern are subtle and with some overlap, so great care should be taken to note as many of the following features as possible. Together they give the juveniles/females of each species a subtly distinct appearance, which becomes more familiar with practice. Cinnamon Teal typically have an overall much warmer-toned face with almost orange/rusty wash as the background colour. The pattern is generally much more bland with less-contrasting features than on the Blue- winged Teal. The dark eye stripe is thin and does not reach to the dark nape. The pale eyelids are thin and relatively inconspicuous. The loral spot and throat area are reduced in size and pale yellowy-cream in colour. On Blue-winged Teal the loral spot and throat area are white, large and conspicuous. Although variable, the dark supra-loral spot appears virtually to join with the dark forehead on Cinnamon Teal forming a continuous dark area across the forehead region most obvious when viewed head on. On Blue-winged Teal the dark supra-loral spot is usually divided from the dark forehead by conspicuous pale line, again most obvious when viewed head on. 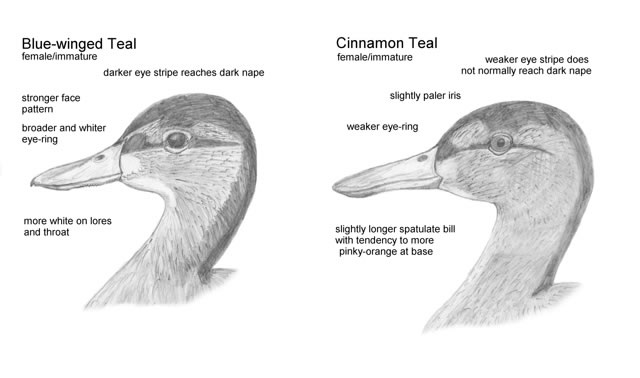 There appear to be subtle differences in the bare-part colours, which are not absolute but can be apparent and helpful on some individuals. Many Cinnamon Teals have fairly obvious orangey pink along the bill rim of the upper mandible and the iris tends to be a warmer hazel colour. On Blue-winged Teal there can be some orangey pink on the bill, but it is so subtle that usually the whole upper mandible appears blue-grey only. The iris on Blue-winged Teal is a colder grey-brown colour. 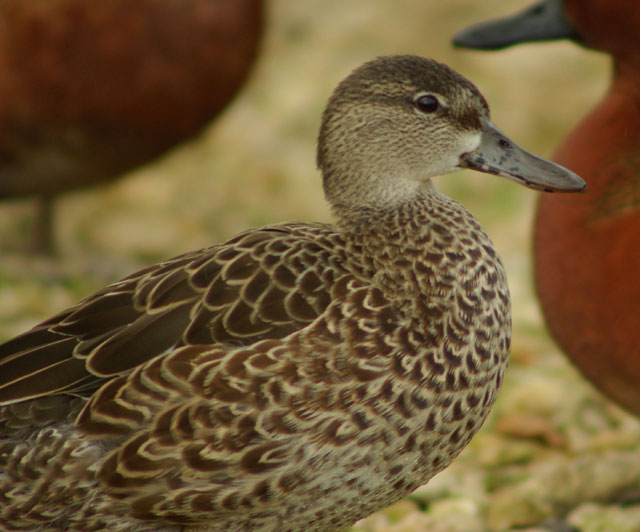 First-winter female Blue-winged Teal: in captivity. Slimbridge, Glos, January 2007
Notice here how the dark supraloral spot at the bill base is separated from the dark forehead by pale line reaching to the bill base. This is much more commonly present on Blue-winged than Cinnamon Teal. The dark eye stripe is rather broad and reaches to the dark nape feathering and the bill is not as long and spatulate-looking as on the Cinnamon Teal. The whitish throat patch is conspicuously larger than on Cinnamon Teal (photo: Martin Garner). 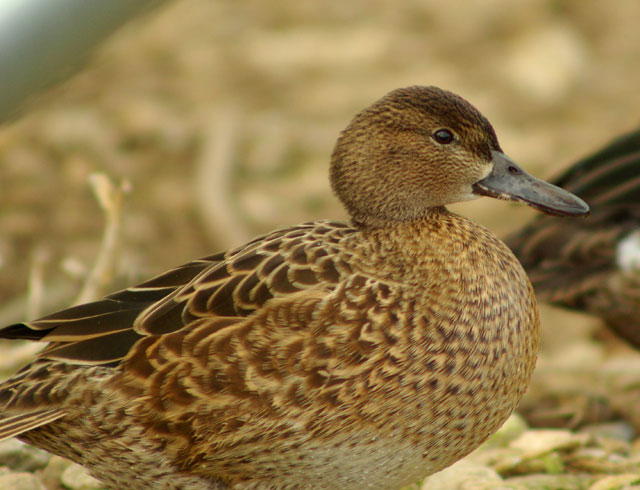 First-winter female Cinnamon Teal: in captivity. Slimbridge, Glos, January 2007
This individual shows more of a loral spot, still less than typical Blue-winged Teal. The throat patch is also small and indistinct. Notice the slightly longer, more spatulate bill and also the presence of orangey-pink tones along the rim of the upper mandible. These are much more commonly present on Cinnamon Teal than on Blue-winged Teal (photo: Martin Garner). 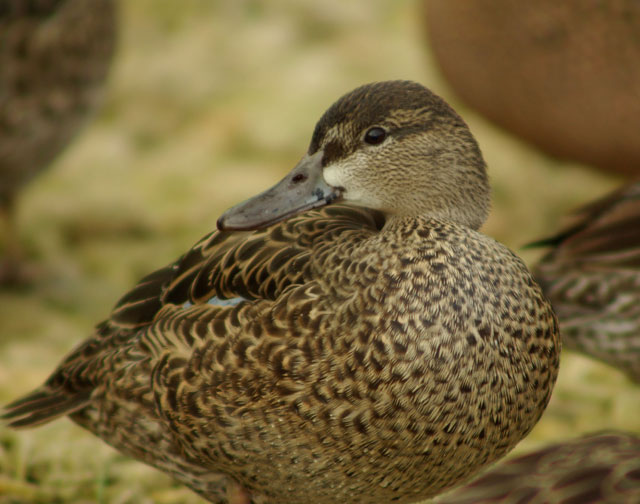 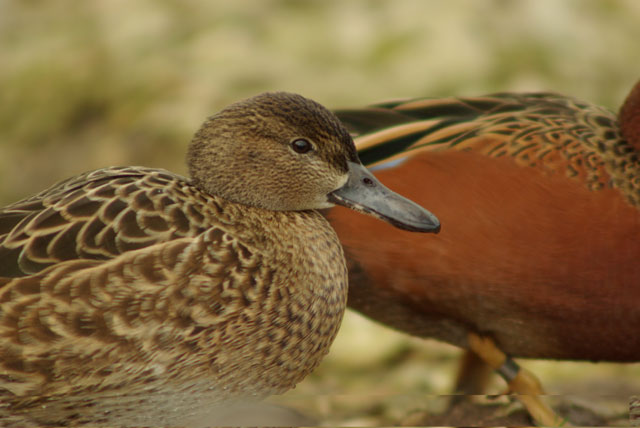 First-winter female Cinnamon Teal: in captivity. Slimbridge, Glos, January 2007
It does make the identification easier of a male of the species is in attendance (at least in theory)! First-winter male Cinnamon Teal behind. Notice how the dark supraloral spot almost joins the dark forehead, whereas Blue-winged Teal normally have more obvious pale dividing line reaching through to the bill base (photo: Martin Garner).

Adult male Blue-wings have longer bills than females and come very close in length to female Cinnamon Teal. They also tend to have warmer plumage tones and blander face patterns, which can be very Cinnamon-Teal-like. The key is to check for two features, which distinguish the age and sex. In females the speculum pattern is dull and rather colourless with only a weak broken white upper border. In males the speculum is a bright metallic green with a broad curving solid white bar on the upper border. In the case of the Unst bird, the wing pattern demonstrated that it was a male bird, and the presence of yellow legs, at a time when juveniles would have dull greyish legs, indicated among other features that it was an adult male in eclipse plumage. Had it been an adult male Cinnamon Teal, it would also have had an obvious bright yellow- to red-coloured iris. 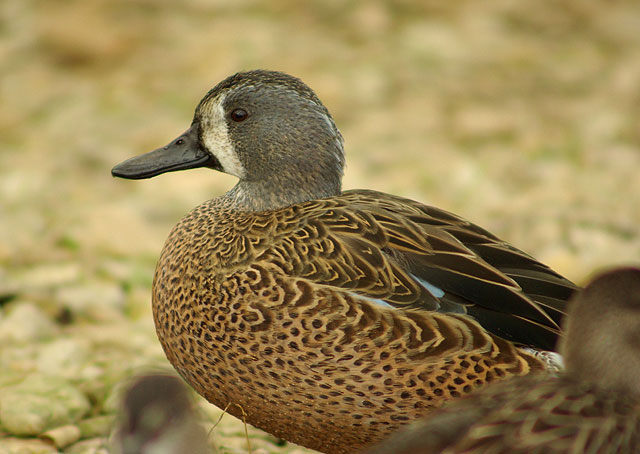 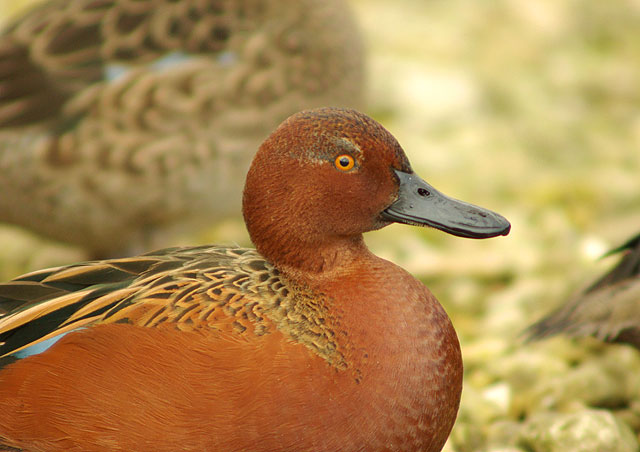 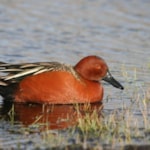 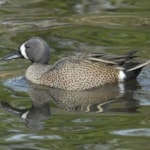