Despite being associated with winter in Britain, Eurasian Woodcock is part of the country's breeding avifauna. However, autumn offers perhaps the best chance of seeing this reclusive species as incoming migrant birds make landfall. That said, even the best-trained binoculars have difficulty seeking it out in daylight. Birds are usually flushed from almost underfoot while walking in woodland, but can also be seen performing their display flights – known as 'roding' – at the start of the breeding season.

Though highly secretive, Woodcock is fairly common, and despite being in the sandpiper family Scolopacidae, it probably does the least wading of all the British representatives of this group. Setting eyes on a mystery is always memorable, perhaps even more so at dusk in the atmospheric transition between day and night; most of all in the long sunset of early summer. Then, as the light fades and owls begin to call, you can wait for a silhouetted shape to appear. That's when you can witness Woodcock's roding flight, and listen to its unique grunting and squeaking calls. 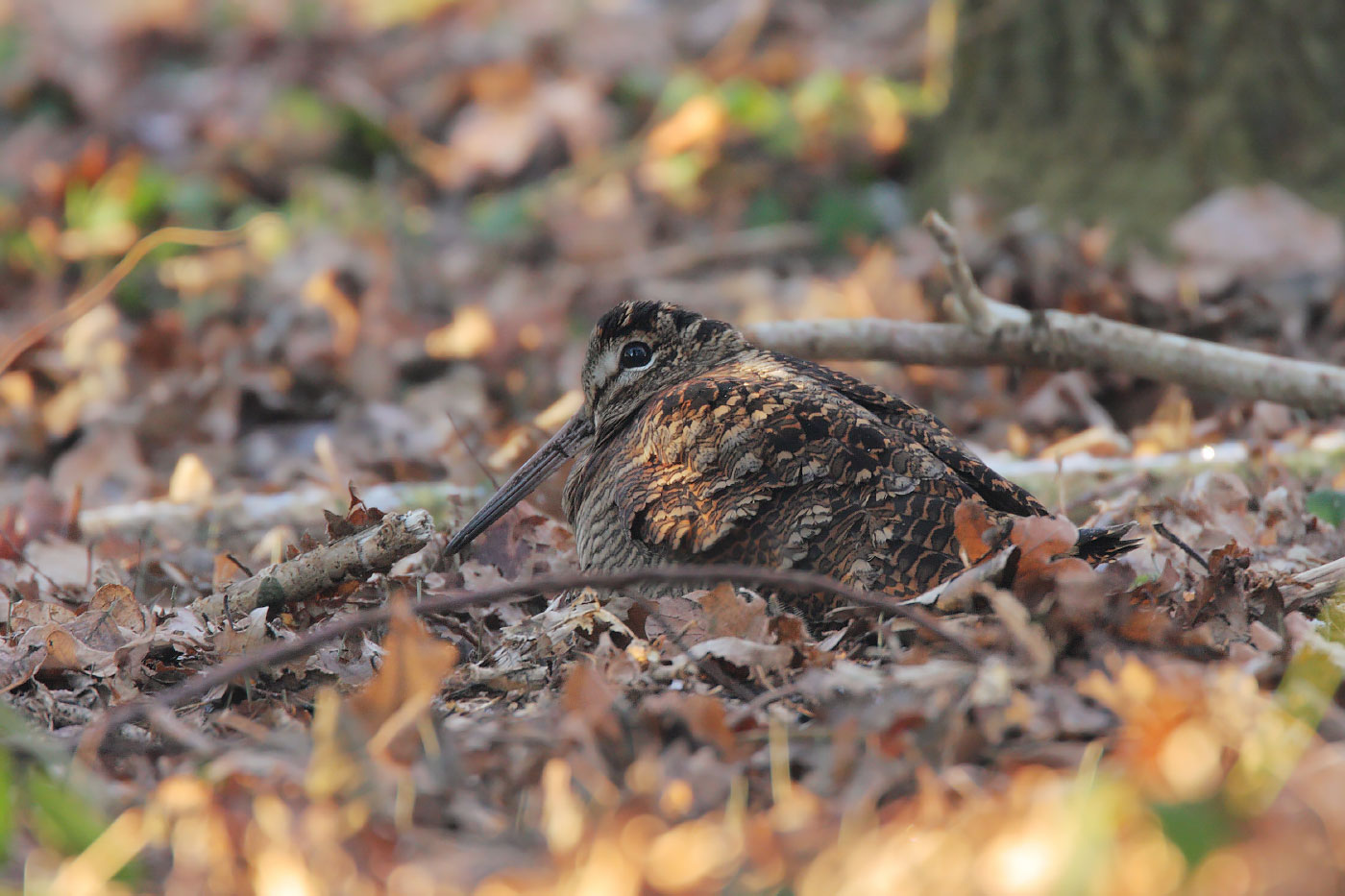 Eurasian Woodcock's cryptic patterning resembles the fallen rotting leaves of the woodland floor, making it very hard to see. Most sightings of the species tend to be as it whizzes away after being flushed at close quarters (Di Stone).

Numbers of Woodcock in Britain are boosted by immigrants from the colder parts of northern and eastern Europe which spend the winter here. This almost invisible but vast influx mostly arrives in the first week of November (traditionally said to be on a full moon). The new arrivals explore winter territories, generally in fairly dry, deciduous woodland with damp clear ground nearby for feeding.

Wintering birds can be seen arriving along the east coast in autumn, long known as the 'fall' of the Woodcock. Every year, around three quarters of a million of these plump, snipe-like creatures migrate to Britain and promptly vanish into the wider countryside. The best views most birders obtain are of odd birds shooting away like cannonballs when disturbed. This is perhaps not so surprising, as Woodcock is a quarry species in many European countries and it is mainly through reports of ringed shot birds that we know most of our winter visitors come from Scandinavia and Russia. 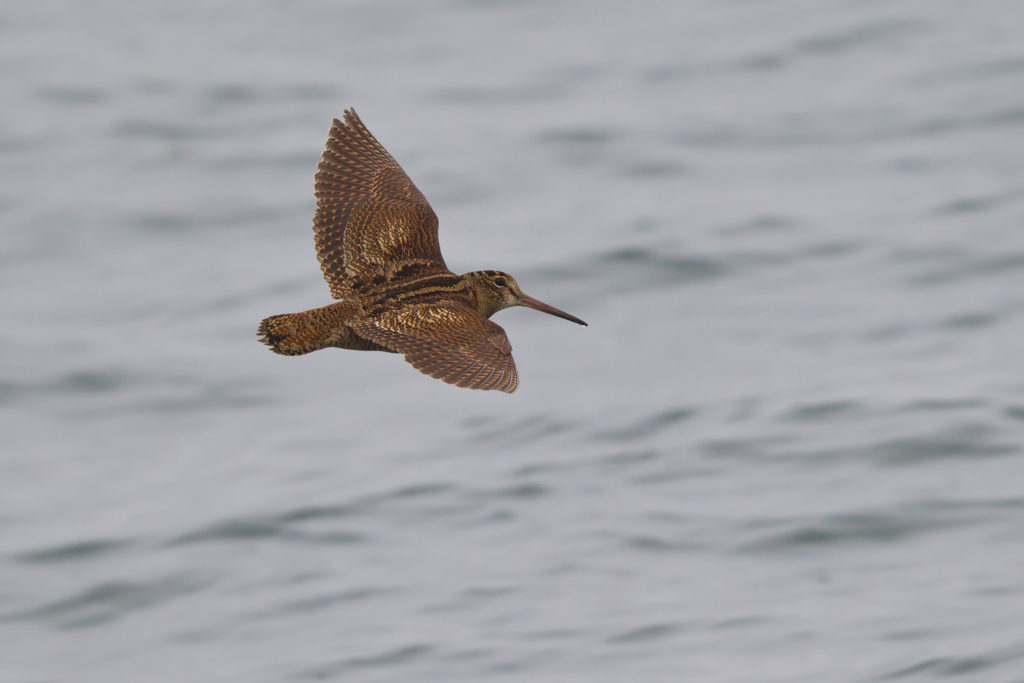 Woodcock can sometimes be seen offshore as they cross bodies of water such as the Baltic and the North Sea heading for Britain, or in this particular bird's case, Schleswig-Holstein, Germany (Martin Grimm / www.birdimagency.com).

It is not an easy bird to see, being largely nocturnal as well as secretive. It lies low during the day in its mostly broadleaved woodland habitat, perfectly camouflaged by its beautifully barred and patterned plumage. Bouncing on short legs, it probes the ground for earthworms and other subterranean invertebrates with its long bill. The species' eyes are set high and well back on its head, giving it 360-degree vision, meaning that a Woodcock is almost certain to see you before you see it. This adaptation also means that a photograph of the back of a Woodcock's head will show the eyes clearly, making it look strangely like a bird without a beak.

You will most certainly be startled as one unexpectedly flushes from the ground beneath your feet, coming across the bird by mistake and almost stepping on it. But if you keenly observe the jinking, zig-zag flight, you might see where it lands. If not too far away, you can then scan for a glimpse of this bird on the ground. 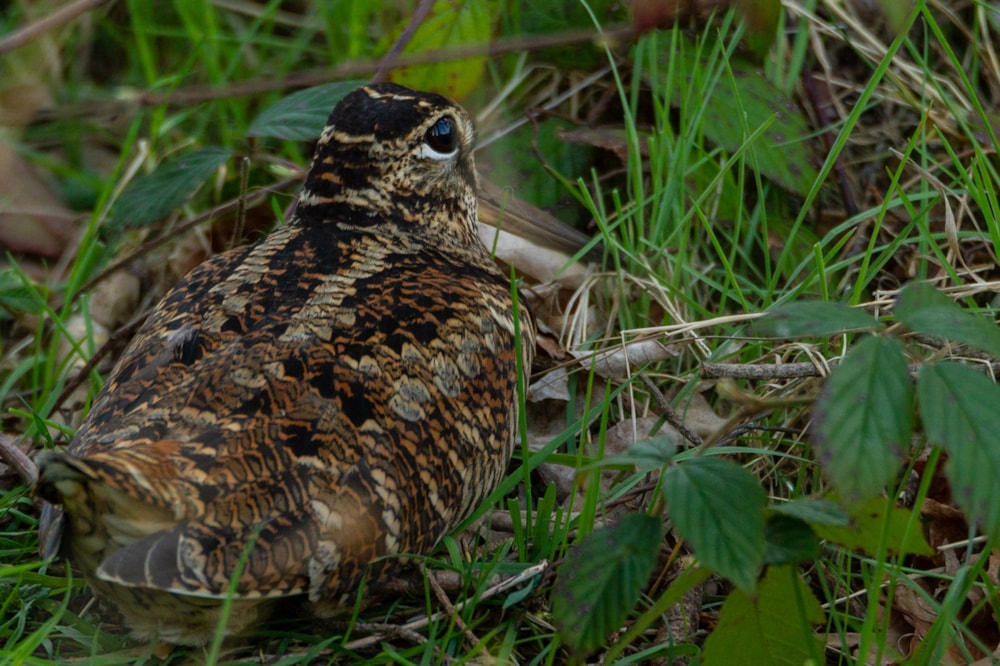 Eurasian Woodcock's eyes have evolved to be situated towards the rear and top of the head, presumably partly to protect the big, fragile organs from being damaged by vegetation as it probes the soil. The unusually large size and position of its eyes also gives it a 360-degree field of view, making the very edible species very hard for a predator to surprise. The bird actually has better vision to the rear than to the front (Christopher Blakey).

When I heard a Woodcock for the first time, I likened it to the grunt of a small pig, but others say it is like the croak of a frog; this sound is followed by high-pitched squeaking. During that initial experience, on hearing the call I looked up and watched as the bird made a cameo appearance against the darkening sky: a plump, barrel-chested wader with a long bill and a fluttering, shallow-winged flight almost like a bat's. However, it wasn't swooping around but heading in a dead straight line, about 40 feet above us, grunting as it flew. The display is intended to attract females, as resident males patrol their wood at dawn and dusk above the trees, grunting to announce themselves.

The roding is best viewed around 20 minutes or so after sunset, and its appearance often coincides with the first, tentative calls of Tawny Owl. The display usually ceases 30-45 minutes later, before being repeated again immediately before sunrise. Commencement of the roding season seems to be heavily influenced by weather. The performance often starts at the beginning of March, but a severe cold snap will delay it into April.

But despite this prominent display flight, it is always difficult to accurately assess the number of Woodcock present, as roding males do not hold territory in the conventional sense. Rather, they rode over a relatively wide area in an effort to tempt females to join them, or alternatively, to encourage females on the ground to reveal themselves. 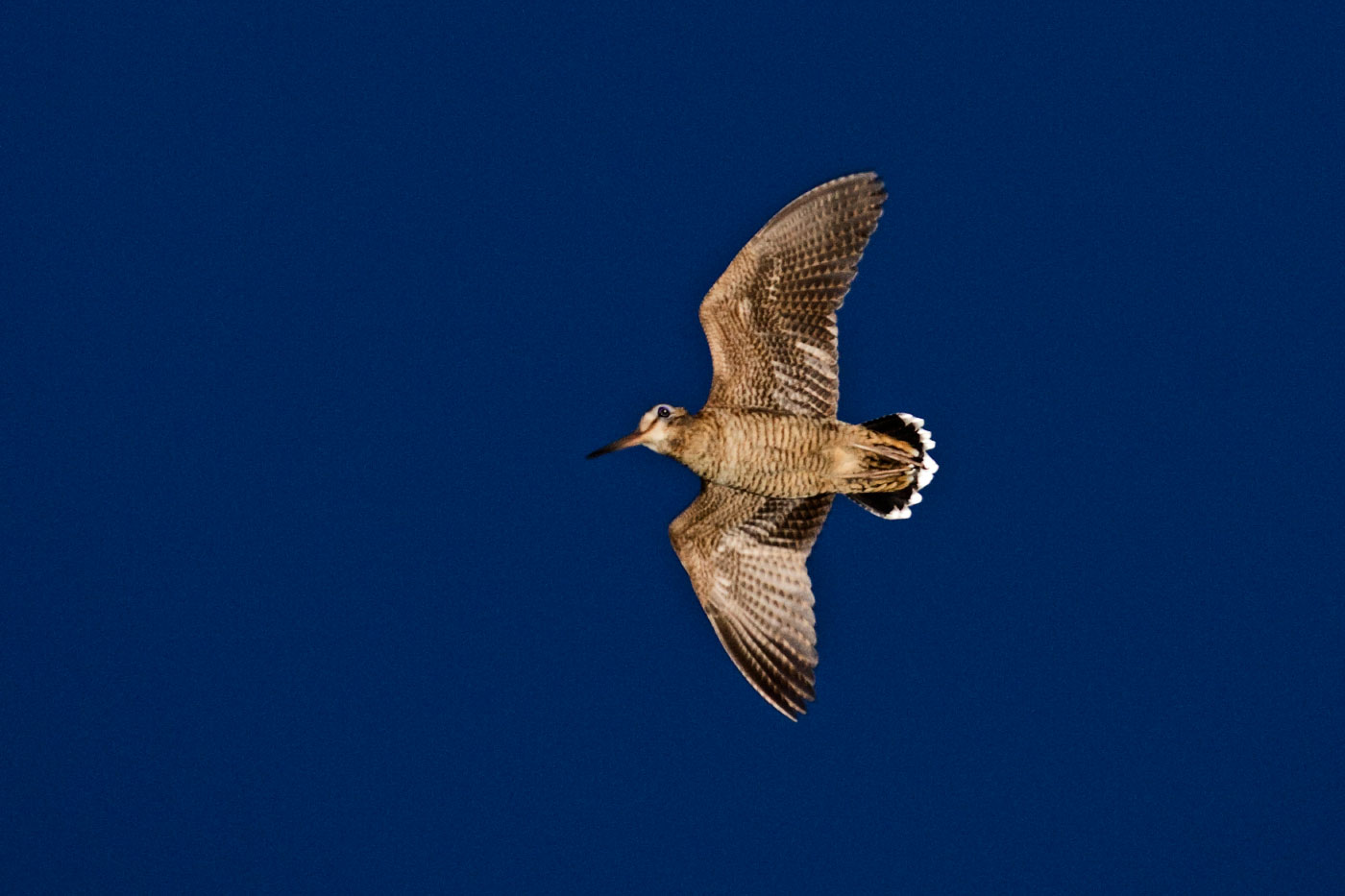 Roding takes place at dusk and in the half-light before dawn, with males flying just above the tree-tops, uttering a two-part call in flight, which consists of a series of low grunts and high-pitched whistles. The display can start as early as February and continues well into the summer on breeding territories. Male Woodcocks are usually polygynous – that is, a dominant male may mate with up to four females during one season (David Tipling / davidtipling.com).

Woodcock nests are little more than shallow depressions concealed among the undergrowth, sparsely lined with dead leaves, dried grass and, maybe, a few feathers. Clutches of four eggs are about average, and the young hatch after around 22 days, complete with a covering of down, and are immediately mobile. They fledge after a further 15-20 days.

Diet is made up of earthworms and other woodland invertebrates that are captured while the birds probe the damp ground with long bills specially evolved for the purpose, or are taken from amongst the leaf litter.

Breeding populations of Woodcock have declined in recent years due to habitat loss. Conservation organisations across the country are looking after woodland and heathland habitats for the benefit of a range of species, as well as monitoring populations, clearing scrub and coppicing, raising awareness and protecting nesting birds.

Woodcock are relatively widespread in the breeding season and easier to detect. At other times, however, they are so secretive that it's difficult to guess the extent to which they're present. 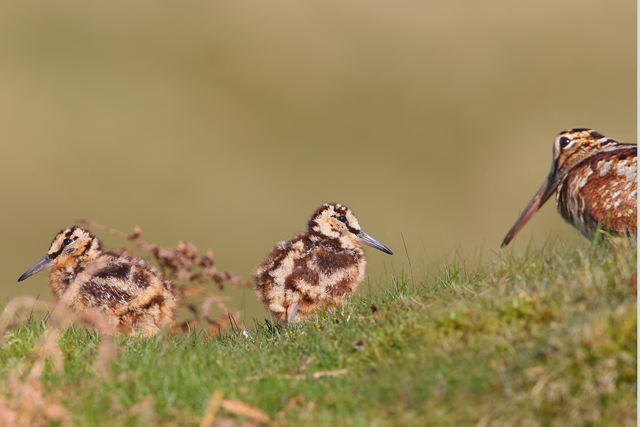 Views like this of a Eurasian Woodcock family are very rare. It has evidently declined as a breeder in Britain in recent years, but is perhaps under-recorded in many areas due to its elusive nature (Colin Bradshaw).

Woodcock is a living contradiction – a wader that has abandoned the water's edge to live in woodland, and evolution has doubly equipped it for survival there. It possesses an astonishing camouflage, a mottling of browns, russets and buffs which can render it invisible on a woodland floor, even if you're very close.

Keep a keen eye to the skies along the coastline in early November for migrant birds, have an even keener eye while you are sauntering through the autumnor winter woodland and, with luck, you will glimpse one of these mystical birds.