A stunning summer-plumaged Curlew Sandpiper can be a captivating sight for anyone during an early autumn outing to our coastal saltmarshes and lagoons. Scarce enough to be noteworthy and strikingly dapper in summer garb, they are one of those elusive waders that are of sufficiently unpredictable occurrence to merit attention as they capture your gaze whilst scanning through flocks of commoner waders.

Breeding in the high Arctic, birds passing through Europe winter mainly in southern and West Africa and southwestern Europe. Globally, the wintering range extends from Africa through to Australia and New Zealand. Britain and Ireland lie on the western fringe of the species' migration route to Africa, thus in some years it can be quite scarce, whilst in others relatively widespread. Like many Arctic waders, Curlew Sandpipers are prone to influxes, during which times they can almost appear abundant as they utilise every mud-fringed pool and puddle. Weather conditions over Scandinavia and the Baltic at the time of the autumn migration are considered one of the key determining factors for influxes into Britain and Ireland, with breeding success and numbers adding to the combination of factors that present such events to us lucky birdwatchers.

Scarce during the spring, with single tallies the norm and double-figure counts the exception, it is during the autumn that most birders have the opportunity to encounter this delightful Calidrid. Males leave the breeding grounds after mating, chauvinistically leaving the female to rear the young. Females then commence their migration once the young can look after themselves, though failed breeders move earlier. Most males have departed their breeding areas by early July, but it is not until early August that juveniles are on the move, with birds continuing to depart their breeding areas through into the autumn, the majority doing so in late August and early September.

Large influxes have been noted on various occasions in the past, with relatively recent national influxes noted in 1969, 1985, and 1988 and smaller, more regionalised, influxes in other years (in Norfolk for example in 1990, 1992, 1993 and 1996). In general, the larger influxes are associated with years of high breeding productivity. The timings of influxes tend to be in late August and early September, with little variation between the timings of influx years, coinciding with the main exodus of juvenile birds from breeding areas. During such influxes three-figure counts can be frequent. For example, 400 were noted at Wisbech Sewage Farm in 1969, and in excess of 1,300 were noted in Norfolk alone in 1985, including 500 at Terrington.

Even during non-influx years this delightful species can be encountered with some degree of regularity at a number of sites, and the average UK passage numbers are estimated to be in the region of 750-1,000 birds, though as mentioned earlier these estimates are prone to variation. Some of the better prospects for seeing the 'Pygmy Curlew' include the 'east coast' reserves, such as: Blacktoft Sands in E. Yorks SE8423; Norfolk reserves, such as Cley Marshes NWT TG0544, Breydon Water TG5007 and Titchwell RSPB TF7443; Minsmere in Suffolk TM4767; Oare Marshes in Kent TR0064; Frodsham Marsh in Cheshire SJ5078; and Stanpit Marsh in Dorset SZ1792, though of course any suitable habitat may attract passing birds during the autumn.


Identification is quite a straightforward process given reasonable views. The Curlew Sandpiper is an elegant wader, with long smoothly decurved bill, long legs and a thin neck. Summer-plumaged birds show striking brick-red underparts with intricately patterned upperparts. Juveniles are beautiful birds with scaly upperparts, a subtle peachy-buff wash across the breast and prominent supercilium. In flight the white rump is a strikingly obvious feature and the call is a distinctive 'chirrip'. 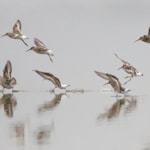