With its striking appearance and exotic looks, the Bearded Tit looks out of place in a British environment. A member of the parrotbills familiar to travellers in Asia, it is the only representative of the Timaliidae family in Western Europe. The breeding range reaches from Britain and Spain in the west, eastwards across the Palearctic to northern China. Distribution is patchy in the west, restricted due the fact that it occurs only in lowland reedbeds during the breeding season.

The British breeding population numbers around 400 pairs, the bulk of which is in large reedbeds near the east coast of England and along the south coast. There is also a population in Lancashire (first colonised in 1973) and in the Tay reedbeds in Scotland. Bearded Tits have also bred in Co. Wicklow in Ireland and in 2005 bred at the Newport Wetlands Reserve (Gwent); this is the first time the species has bred in Wales since the early 1980s.

Following the breeding season, birds form autumn flocks from mid-September onwards. A visit to a breeding reedbed at this time of year can provide an amazing experience as groups fly high above the reedbed, a disruptive commotion in the still autumn morning. Autumn movement takes place through October and into November. It is at this time of year that birds turn up 'out of range' at any patch of suitable habitat, often in very small stands of reeds. Despite their gaudy appearance, Bearded Tits can be exceptionally elusive and are usually most easily located by their ringing 'ping, ping' call. During the winter months some of these passage birds may remain, but most move on, and the main wintering sites are in the same reedbeds that hold the species during the summer months.

Ringing studies have shown that during the winter the British population shifts to the west, and some continental birds have been found in British reedbeds. Bearded Tits are particularly susceptible to hard weather, and mild winters impact favourably on the species. Additionally, as for any species with a specialised choice of habitat, they are also highly susceptible to habitat destruction or damage.

Favoured locations to see the species include:

Juveniles resemble females, but are more buffy-coloured. They have a black back, lower mantle and inner scapulars, and mostly black primary, lesser, median and greater coverts. In addition they have black areas on the tail. Some females may show blackish streaks on the back (and crown), but not to the extent of juveniles. Juvenile males have black lores and an orangey-yellow bill. Juvenile females have greyish or brownish lores and a dark bill.


In Lancashire birds first colonised Leighton Moss in 1973 and a population of perhaps 40 pairs formerly bred there (Wilson, 1993), but a population crash in 2001 has markedly reduced this number (Rare Breeding Birds Panel, 2004).

In Yorkshire, between 40-65 pairs breed at Blacktoft Sands, but post-breeding numbers often total several hundred birds, and in 1990 it was estimated that 1,000 young birds were reared at the site (Yorkshire Bird Reports). 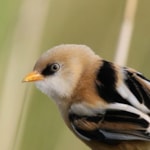