The number of colour-ringing schemes around the British Isles (and Europe) has grown a huge amount over recent years, and many of these projects contribute directly to scientific research projects. We are two PhD students working at the University of Exeter on projects using colour rings and neck collars to identify individuals. We use a tool known as social network analysis to investigate the causes and — importantly — consequences of the social structure found in two goose populations, both on the population as a whole and on individual geese. Social network analysis uses the idea that, by resighting each colour-ringed individual multiple times over a period of time and recording the colour-ringed birds they're with, it is possible to build up an idea of how much time each pair of individuals spends together. It also reveals individual differences in social behaviour between birds. By doing this for every possible combination of individuals, and using some clever algorithms borrowed from network theory, it is possible to construct a "map" showing the social interactions of an entire population. This network can then be used to investigate the social structure of the population as a whole and the social strategy of each individual within it. 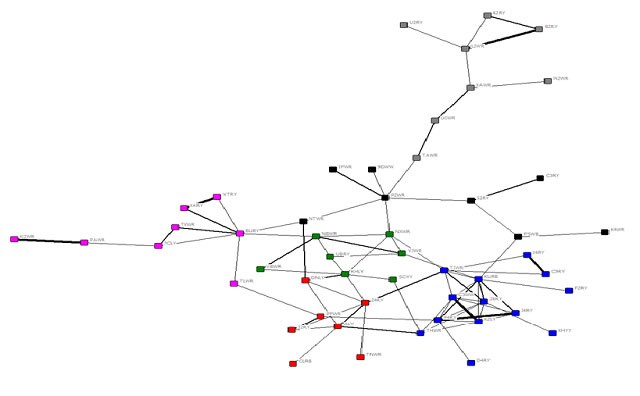 Matt said, of the Pale-bellied Brent Geese he is studying, "I started working with the Irish Brent Goose Research Group in October last year, with my research focussed on investigating how variation in social interactions and social strategies between individuals could result in differences in their behaviour, foraging success and body condition. Since then I have spent nearly three months out in the field in Ireland and Iceland and resighted colour-ringed geese nearly 10,000 times! In order to build social networks that provide a detailed enough picture of what is going on it is necessary to have a huge number of resightings, and my own personal efforts are added to greatly by a large number of volunteers who send in resightings to the group from my core field sites. Any resighting that places two or more individuals together within a flock can be used to help build social networks, and even resighting an individual by itself enables us to build up an idea of its "home range", something which is likely to have an important role in causing the patterns of social associations that we see. In addition to my resightings work, colour-rings are also used to select individuals for behavioural watches. Being able to identify particular individuals lets me focus behavioural studies on individuals that occupy important positions in a social network and collect repeated measures to determine how consistent their behaviour tends to be. I'll be off out to Ireland in the imminent future and the Irish Brent Goose Research Group blog should be updated regularly with news from fieldwork as well as more articles on how we use social networks and what we have found so far as the winter progresses."

Instructions on how to submit resightings to the group can be found online; alternatively, email mjs234@exeter.ac.uk for more information about the project.

Beatrice said: "I'm working with a population of UK-resident Canada Geese that moult in the Cotswold Water Park. Though WWT at Slimbridge have studied local Canada Geese in the past, this is the first project looking at the social dynamics of the Cotswold birds throughout the year using social network analysis. Not a lot is known about how these flocks move about and as to whether there are particular birds that roam around lots of flocks, and some that only associate with a few close associates. Since it's important to know how much intermingling of flocks takes place to accurately predict how a disease might affect a population, I'm looking at how many birds each of my collared Canada Geese associates with and whether there are stable alliances between individuals, and between flocks. We have marked 153 adult birds in the Cotswold Water Park in July 2012 with orange neck collars and BTO metal leg rings, and I and several wonderful observers are keeping track of where the collared birds end up, and with whom. You can read more about the birds and the science on my blog; the project is also listed on the European colour-ring birding website."

One of the main questions is how displacement and movement of geese between sites can influence social interactions. Having a large number of colour-ring resightings is fundamental to the success of our research, and by sharing the details of our projects and explaining how and why the resightings of colour-ringed birds are important we hope to encourage as many people as possible to contribute to the success of the projects. Even a single resighting can be valuable, and any resightings of a flock of individuals (ideally with the size of the flock recorded) containing multiple ringed individuals will be very important indeed.

By reading our blogs it will be possible to keep track of how the research progresses and learn more about how social networks work and how we can use them for our research. At the moment we've had little chance to come to any firm conclusions based on the data collected so far. Hopefully, once we've had a chance to analyse the data we've collected we can write in more detail about what we've found, and how the knowledge gained can be applied to the real world!