Slender-billed Curlew has been considered extinct since the turn of the century, but stable isotope analysis has revealed that conservationists may have been searching for breeding sites in the wrong places.

Scientists believed the species bred near Omsk in Siberian Russia, whcih is where the very few documented nests were found at the turn of the 20th century. However, a recent paper in Bird Conservation International by scientists from the RSPB and University of Münster, Germany, used isotopes from the feathers of museum specimens to reveal that the core of the breeding range was much further south than previously thought. Could Slender-billed Curlew also hang on in the forest-steppe interface in northern Kazakhstan, which has a history of hiding large bird populations?

As the full extent of the species' breeding distribution has never been known, finding more concrete evidence of its nesting grounds could be a final helping in its rediscovery if it still exists. Using samples of feathers donated by museums across the globe, scientists at the RSPB traced the chemical signatures that the local environment left on the feathers of the juvenile curlews, which were grown on the nesting grounds. Concurrently, a series of expeditions led by Geoff Hilton, now of the Wildfowl and Wetland Trust, sampled feathers of waders at known locations from across Russia and Kazakhstan. These expeditions collected a wide range of samples, and recorded the co-ordinates of each sample. 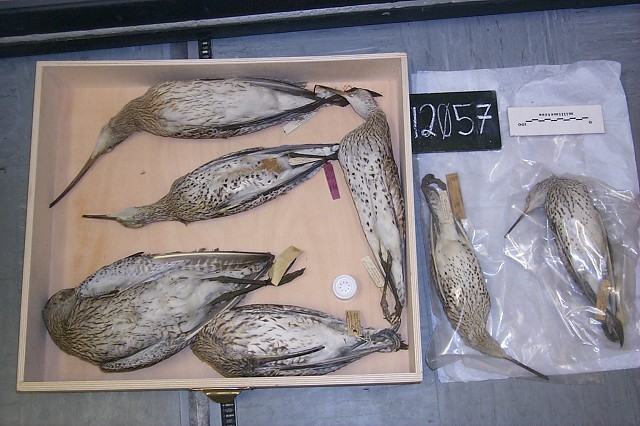 Specimens of Slender-billed Curlew at the Manchester Museum were used as part of the isotope analysis project. photo (Photo: Geoff Hilton)

Maps of the ratio of hydrogen isotopes across the globe were then used to compare with the values measured in the wader feathers collected by the expeditions enabling a 'calibration equation' to be produced. The feather values from Slender-billed Curlews were fed into this equation, enabling the locations where these juveniles grew their primary feathers to be identified.

The core of the breeding range was mostly revealed to be not around Omsk, but much further south in the forest-steppe interface in northern Kazakhstan. Omsk was identified as the source of some birds but these results indicated that recent searches were taking place on the edge of the range.

The area identified as the potential source has a history of hiding large bird populations — surveys of this area found far larger populations of Sociable Lapwing than were thought to exist. Could Slender-billed Curlew also hang on in this area? None of the Sociable Lapwing fieldwork has found any Slender-billed Curlews, but that does not mean they are not there. Not only are they difficult to identify but they might also occupy slightly different habitats. 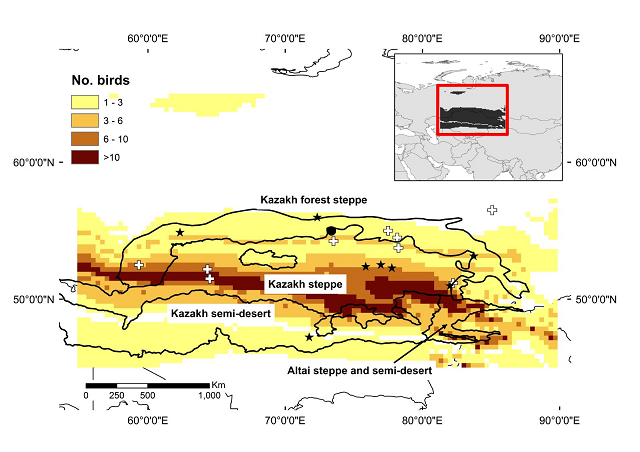 Above: Slender-billed Curlew breeding range as revealed by stable isotope analysis of 35 juvenile specimens during the recent research.

Recent efforts to locate Slender-billed Curlew, while producing no definite sightings, have brought other benefits. Between 2009 and 2011, volunteers surveyed over 680 sites in 19 countries, with additional searches in another 12 countries. This has increased our knowledge of various species and the threats they face in many seldom-visited areas.

In fact, more than 500,000 birds of 400 species were observed during these searches and the data gathered will help identify regions that could be classified as Important Bird or Biodiversity Areas. This work has also shown the massive role that enthusiastic volunteer birders can play in conservation.

Curlews and godwits around the globe are now at risk of joining Slender-billed Curlew in the slide towards extinction, as seven out of 10 species in their tribe now face extinction.