Poole Harbour is the world's second largest natural harbour and lies immediately west of the huge Bournemouth/Poole conurbation. The pressures of urban development have always been evident around the area and have taken their toll on the number and variety of bird species to be found, particularly during the summer months, but the harbour still remains an area of outstanding natural beauty and of national and international importance for wintering wildfowl and waders.

During the winter the harbour is teeming with wildfowl. Eiders, Common Scoter, Great Northern Diver and auks frequently inhabit the harbour mouth and surrounding bays such as Shell Bay and Knoll Bay. Red-breasted Mergansers and Goldeneye are the most numerous species of diving duck, preferring the deeper areas of the harbour in the north eastern corner. Slavonian Grebes and Black-necked Grebes also occur here, and are often quite numerous, particularly in the Bramble Bush Bay area. Long-tailed Duck and Scaup are less frequent visitors but occur with some regularity.

The sheltered bays at Brands Bay, Arne and Whitley Bay with their spartina marsh and sheltered waters attract numerous species of dabbling duck. Wigeon and Teal can be particularly conspicuous, with smaller numbers of Shoveler and Pintail. Little Sea, situated in the Studland peninsula, is another favourite haunt for dabbling duck, with good numbers again of Wigeon, Teal, Pintail, Shoveler and Gadwall as well as Tufted Duck, Pochard and a regular small flock of Scaup, which contained a Lesser Scaup last winter. Brent Geese can also be found regularly at these sites.

The reserves that have been established around the harbour are good sites for wintering waders. Arne has a regular wintering flocks of Black-tailed Godwits, Curlew, Redshank, Dunlin, Turnstone, Oystercatcher, Grey Plover and Snipe with smaller numbers of Spotted Redshank, Greenshank, Knot, Avocet and Bar-tailed Godwits.

Brownsea Island is another favourite haunt for many of the harbour's wader species, particularly Avocet, which now regularly number hundreds. Spotted Redshank, Greenshank and Knot also winter on the lagoon. Purple Sandpipers often winter on the rocks around the ferry at Sandbanks and Whitley Bay is good for Sanderling and Ringed Plover.

Gulls are plentiful throughout the winter months, with all the commoner species present in vast quantities. Areas such as Brownsea, Poole Park, Upton and Whitley Bay are particularly good, especially for the rarer gulls such as Yellow-legged Gulls, Mediterranean Gulls and Little Gulls, which winter in the harbour.

The marshes and heathland that fringe the harbour are regular haunts for winter raptors. Merlin, Hen Harriers and Marsh Harriers join the resident Peregrine, Buzzard and Sparrowhawk populations. They seem to favour the larger expanses of heathland around Studland, Godlingston and Arne and Hen Harriers in particular appear regularly at Middlebere and Hartland Moor.

As spring approaches, the numbers of wildfowl begin to decrease as the numbers and variety of waders increase, and Brownsea and Arne are two of the best sites for passage waders. Curlew Sandpipers, Little Stint, Ruff and Whimbrel arrive from late March onwards and the number of Greenshank, Spotted Redshank and Common Sandpiper increase. Garganeys are annual on Little Sea and Brownsea Lagoon and Ospreys are a particular feature of the area, and can be observed throughout April and May from vantage points around the harbour, particularly Shipstal Point and Upton.

Terns begin to appear in late March, with Sandwich Terns usually being the first species back, followed by Common Terns and Little Terns. All three species breed on the lagoon at Brownsea, joined by the Little Egrets that now breed regularly on the reserve. Roseate Tern, Black Tern and Arctic Terns are typical on passage, particularly at Brownsea Lagoon and along Shipstal Beach and Point.

The heathlands around the harbour have breeding Hobby, Nightjar, Dartford Warbler and Woodlark, whilst areas of reedbed are occupied by Water Rails, Mute Swans, Little Grebes, Sedge Warblers and Reed Warblers.

By the end of August, wader species start to return to the harbour, peaking around mid September. It's around this time that the ducks, grebes and divers begin to return to the area and the terns head back south.

The harbour itself is a very extensive area and access to much of it is restricted. The best sites, both for birds and for access, are described below.

3 miles east of Wareham – SY972877: A good site for passage and winter waders, particularly Spotted Redshank, Greenshank and Black-tailed Godwit. There is a good vantage point over the harbour for viewing passage Ospreys and terns feeding in the channel.

4 miles north of Swanage – SZ035863: The best sites for wintering wildfowl are Shell Bay, Bramble Bush Bay and Knoll Bay which are excellent for seaduck, particularly Common Scoters, Long-tailed Duck, Eider and Scaup. All three species of diver can be observed here, and Slavonian Grebes and Black-necked Grebes are often quite numerous. Little Sea and Brands Bay are good for Pintail, Shoveler, Teal, Tufted Duck and Pochard. Waders frequent the shores and raptors are a feature of the heathlands along with more typical heathland birds such as Dartford Warbler and Hobby.

1 mile north of Poole – SY993933: Nature trails lead around the park giving good views of the mudflats. Favoured by the commoner waders, particularly Bar-tailed Godwits, Whimbrel and Greenshank. It is also good for passage and summer terns, passage Garganey and Osprey, plus rarer gulls and Red-breasted Merganser and Goldeneye offshore. 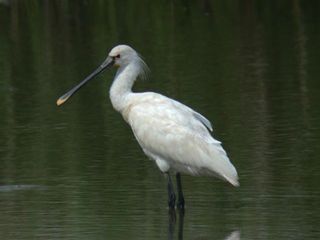