Early on the morning of Friday 17 June, Mike Russell was walking through some inter-war plotlands close to Rye Harbour Nature Reserve when he heard a call which he initially took to be a Great Tit. Mike takes up the story:

"For some reason (perhaps subconsciously the call didn't sound quite right) I decided to actually look at this bird, so I tracked down the source of the call, which repeated several times, to be confronted with a bird which at first I took to be a Reed Warbler. However I soon realised that this could not possibly be the case, since although I was aware that Reed Warbler song includes occasional mimicry this bird quickly ran through a repertoire which included Chaffinch, Linnet and Song Thrush. Additionally the song included frequent whistling notes which I have never heard from a Reed Warbler. There were several Reed Warblers singing nearby which bore no resemblance to this.

"It also looked 'wrong' on several counts — the upperparts looked duller than the typical rufous of a Reed Warbler, and the underparts appeared strikingly white. The facial pattern also looked strong, especially from head-on, with a prominent white eye-ring and supercilium in front of the eye. Furthermore the bird spent most of its time singing from an Elder at a height of 1.5–2 metres from the ground, which seemed very unlike Reed Warbler. Having very little experience of the rarer members of the genus, I was uncertain as to the key features, but at this stage I assumed that I had found a Marsh Warbler.

"Having taken some still photographs and several video clips on my Nikon P610 bridge camera, I set off to find other birders and was fortunate to encounter Dr Barry Yates, the reserve manager. I told him of the bird and took his contact details. Shortly after I returned home and emailed Barry with the best of the video clips, which he subsequently circulated to several other local birders."

Once they looked at Mike's video, Barry and Phil Jones felt that it wasn't right for Marsh Warbler and began to suggest Blyth's Reed Warbler, a species which had been recorded only once in Sussex, five years ago when one was caught at Icklesham. A Blyth's Reed Warbler in a mist-net is one thing, but a singing male in Sussex would be amazing! By the time this exciting hypothesis was being proposed, heavy rain was falling so I listened to relevant songs on xeno-canto and got an early night.

No convenient parking exists close to the site so I arrived rather wet at 04:30 the following morning, having made my way through long and rain-soaked grass. However I soon forgot this mild discomfort when I heard the distinctive song straight away and quickly found the bird sitting out on the same dead branch that I'd seen in Mike's video. Although the sky was overcast, the light wasn't bad and the bird was just three metres away so I could soon see that there were some features which didn't fit Marsh Warbler, in particular the pinkish-grey legs and the short primary projection. 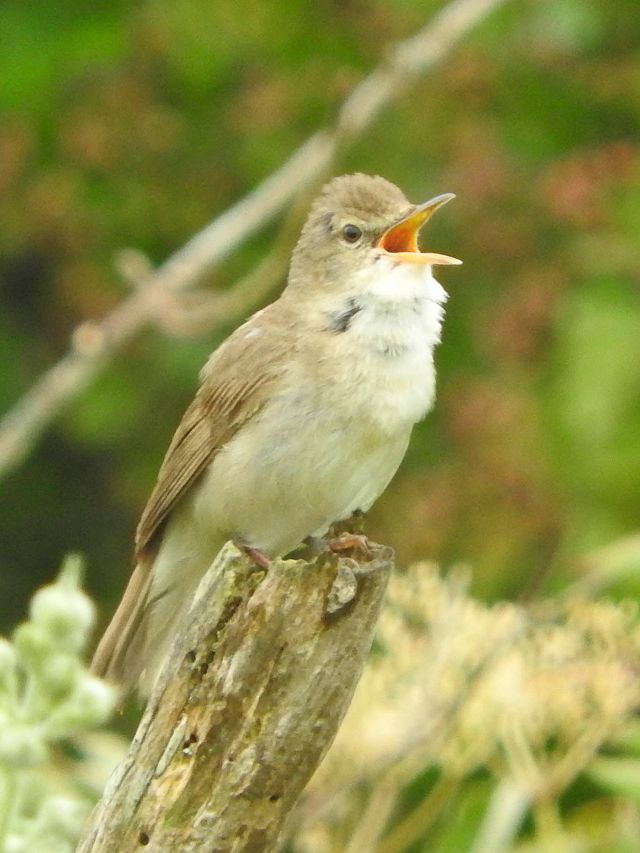 The song, however, was plainly and consistently different from the streaming mimicry of Marsh, clearly structured with a wide variety of discrete phrases divided by pauses of up to 4 seconds. It often started with a very Chaffinch-like "creep creep" that source suggested too by "pink" notes. Other mimicry suggested Great Tit, Common Whitethroat, Sedge Warbler, Great Reed Warbler, Greenfinch, Fieldfare and Green Sandpiper. What's more there were several very distinctive phrases which seem to be all its own: a rising "didid du dee!" (in tone a bit like a Common Rosefinch), a rising "tutt-tit!" and a very characteristic fluting glissando.

The bird wasn't at all difficult to see since much of the time it sang out on dead branches, on occasions flying up to a higher (three-metre) perch in a hawthorn. When it dropped into the scrub it only disappeared from views for short periods, returning to sing from a reed stem. I made several recordings on my phone in which it was possible hear some of the many other species singing in the background. Cuckoos were dashing about, Med Gulls overhead — all this was going on, with this extraordinary and unexpected warbler in front of me, but it was still early in the morning and no one else was around until Sam Smith turned up.

I was sure it wasn't a Marsh Warbler, but not confident to identify it as Blyth's Reed so decided to send a video clip to Pawel Malczyk who'd tried (unsuccessfully) to put me onto one in Poland a couple of weeks previously. Struggling to reduce the file to a suitable size, I stabbed hopefully at the screen until the message sent ...

... Ten minutes and one Little Owl later the reply came: "Hi! It sounds very good in fact! But I expected a little bit longer record to be sure it's a BRW. Send me a longer one on my email please" ...

By this time, Barry had obtained more pictures and sounds. David Walker also came over from nearby Dungeness and agreed with the identification, having found singing males there twice in recent years.

Bearing in mind the difficulties of access and the need to maintain good relations between the reserve and local residents and land-owners, it was decided at an early stage (when it was still a "Marsh Warbler") not to publicise this bird's presence. It was still there first thing on the morning of 19 June but was not found subsequently. 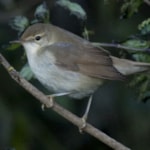