Short-tailed Albatross – catastrophe on the horizon? 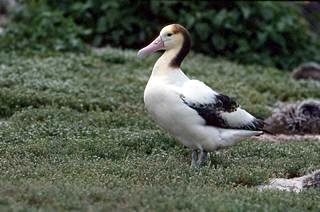 In 1998 I visited Midway Atoll, a remote coral reef situated c.1,000 miles west of Hawaii at the end of a chain of collapsed volcanic islands. At the time a single female Short-tailed Albatross had been present for several years. She regularly produced and incubated eggs, and hopes were high that a new colony of this rare seabird would develop. The Short-tailed Albatross is the second rarest albatross in the world, but its future looked good as the population was increasing.

A giant bird with a bright pink bill and a shape that resembles Old Mother Goose, she is certainly one of my favourite birds. I did not realise at the time how fragile the species' place on this earth would be just a few years later.

During the 1990s, a male was also seen around Midway, raising hopes that the two would eventually meet. Invariably he would pitch up on one of the adjacent coral islets, rather than on Sand Island where the lonesome female patiently waited.

Although she laid and incubated eggs annually, the lack of a male prompted the wardens to remove the egg after 60 days, forcing her to abandon her breeding project and return to the sea before starvation set in. She was always checking out the other albatross species nearby; I had never seen a bird look so desperate to find a partner!

I had arrived on Midway in March, just as she had returned from a 6-day feeding sortie, so my timing couldn't have been better. Some birders that tried to see her invariably missed out, as she was often at sea during their flying visits to twitch her. To minimise the risk of missing out I had booked a stay for a week to maximise my chances of a sighting.

My luck was in. For several days she just sat and waited, and I sat and watched. Eventually, I saw her get up and walk around the edge of the airfield's concrete runway. Few people ever saw her in a pose other than sitting; even the seasonal wardens had never seen her fly!

She approached several Black-footed Albatross that were engaged in courtship dancing. These large, goose-sized, chocolate-coloured birds danced and whinnied like proud stallions in groups of four on the short grass. The Short-tailed, or Golden Gooney, as she had been named, would barge in among them having selected a prospective partner and begin to dance. The prospective partner, one of a normally brutish and aggressive species, would take one look at the pink-billed hulk and run away, apparently scared to death. It must have been like meeting Bella Emberg on the dance floor of a crowded nightclub! 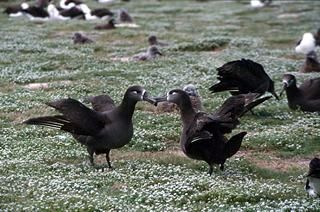 Black-footed Albatross frequently hybridises with the much commoner, but similar sized, Laysan Albatross, but none were prepared to meet this particular oversize challenge. Despite this amusing incident, it was only a matter of time before she would find true love, or so everyone thought. 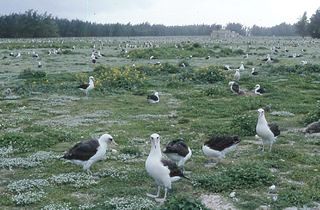 In 2003, she and her kind now find themselves under serious threat - their homeland looks set to explode!

Apart from the odd stragglers such as the Midway birds, the Short-tailed Albatross population breeds on Torishima Island, a small volcanic island about 600 km south of Tokyo. On August 11th 2002, operators of a vessel reported white smoke rising from the summit of the volcanic island and the Japanese Coast Guard confirmed that it was erupting.

Previous eruptions occurred in 1902 and 1939, with the former resulting in the loss of the central cone, and the latter in the death of 125 islanders. The island has been deserted since, and the Short-tailed Albatross has staged a slow but steady comeback. In 1949, the species was actually declared extinct when no birds bred on the island, but the following year a single pair bred, rising to six pairs in 1954.

The longevity of this bird has been its saviour. One quarter of the population do not return to breed each year, and while the island was rendered unsuitable for breeding, these birds remained out at sea and away from danger. Adults have a high survival rate (96%) and are excellent parents to their chicks, which also enjoy high survival rates.

Eventually the survivors rebuilt a viable population on Torishima. In 1971, twelve adults were found on Minami, in the Senkaku Islands. The first chicks were seen there in 1988 and stragglers were reported at Midway Atoll.

The world population was estimated at approximately 1,680 individuals in May 2002, but this includes many immatures that do not breed until at least six years old. About 1,415 birds are at the main breeding colony on Torishima and about 260 birds at a smaller colony on Minami.

Hopefully the timing of this eruption will occur outside of the breeding season ensuring that the birds will survive. They arrive on the island to breed in October and depart in June. They now have to bide their time until the unpredictable volcanic activities cool off and allow the birds to return to their main breeding site. There is however, the possibility that the whole island will explode and disappear.

The Short-tailed Albatross has suffered catastrophic losses in the past. Five million birds were slaughtered on Torishima alone between 1885 and 1903, with killing continuing to the 1930s when their home was protected. Their feathers were used for quills, bodies and guano for fertiliser, eggs for food and fat rendered down, an average bird yielding one pint of fat!

The range of these magnificent birds was considerable, with feeding grounds off the Alaskan coast and regular sightings down the Pacific Coast of America. Indeed it is one of the prizes sought after during Californian pelagics.

A period of uncertainty now exists. The loss of one or two breeding seasons will hopefully not affect numbers too badly if adult mortality remains low. With luck, the birds may chose to colonise other islands rather than wait for events on Torishima to cool down - possibly Midway?