With their almost human-appearing faces and mysterious nocturnal habits, Owls are among the most popular of all bird families. The two species treated here – Short-eared Owl and Long-eared Owl – are scarce breeders in Britain, though more numerous in winter when their numbers are boosted by migrants from Europe. As the days grow shorter, you might be lucky enough to find one on your patch. Read timely advice from Andy Stoddart on how to separate these two similar species, especially in flight. 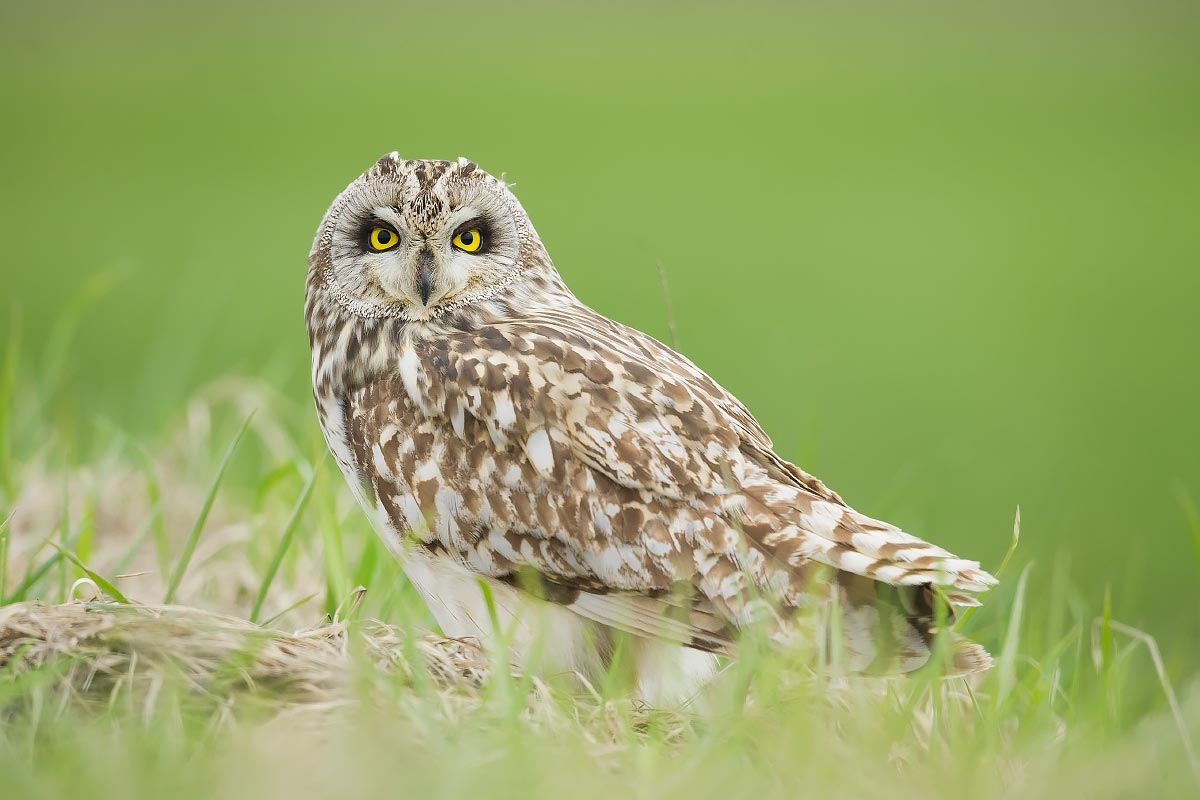 Short-eared Owl (Italy, 26 March 2012). With their intricate plumage and cat-like faces, owls are highly photogenic birds. This image of a Short-eared Owl shows its features to perfection: a horizontal perched profile combined with pale brown and yellowish-sand plumage and a pale facial disc with dark 'panda marks' around piercing bright yellow eyes. Also just visible are the short 'ears', in reality short feather tufts. Short-eared Owls vary in number in winter in Britain but can be rather numerous in influx years (Alain Gignone / www.agami.nl).

Owls are among everyone's favourite birds, and high on the popularity list are Britain's two species of Asio – Short-eared and Long-eared Owls. An encounter with either always makes for a memorable day's birding, but distinguishing the two species, particularly in flight, is not always straightforward.

This species has a very extensive distribution, breeding in grassland, meadows and bogs across northern Europe and Asia, and also occurring in North America.

In Britain, it is a scarce breeder, confined largely to uplands in the north and west. It is much more obvious as a winter visitor, with significant late autumn arrivals of birds from the Continent, mainly witnessed on the east coast. There, they are frequently seen coming in off the sea in October and November and alighting on beaches and in coastal cover. The size of these arrivals varies significantly from year to year, however, according to the availability of small mammal prey in their home ranges.

Those wintering in Britain can be found both along the coast and inland, favouring areas such as saltmarshes and patches of rough grassland such as disused airfields. In 'good' years small numbers may gather at favoured sites and form communal roosts. Unlike most owls, this species is active during the day as well as at night and is, therefore, generally not difficult to find.

This is quite a large owl. At rest, typically on the ground, it has a somewhat horizontal posture combined with a distinctive pale straw-coloured plumage coarsely marked with dark above, a buffish facial disc, dark eye patches and piercing yellow (occasionally slightly orange) eyes. The two 'ear tufts' are short and can be invisible when folded down. This combination of features should readily eliminate Long-eared Owl at rest but in flight the two species are much more similar.

On a flying Short-eared Owl, look for relatively long wings and a very buoyant, 'airy' flight with rather stiff-looking wings and a somewhat jerky upbeat. There are also long rather harrier-like glides with the wings held in a shallow 'V'. The wing-tip is broad, but in active flight can appear somewhat more pointed.

Pale yellowish-straw coloured upperparts are typical, but overall plumage hues are variable and some can appear rather paler or darker. The contrasting light patch in the upper primaries is usually yellowish-brown, but can be more orange on some individuals and there is a usually prominent white trailing edge to the wing, most obvious on the secondaries.
The underparts are normally whitish with a prominent breast-band of dark streaking – more extensive on some birds than others – which contrasts with the unmarked belly. On the underwing look for a restricted but quite solidly dark wing-tip. Finally, the bars in the uppertail are quite broad and bold.

This species also has a large world range which encompasses northern and central Europe, Asia and North America. Unlike its sister species, however, it inhabits dense copses and deep woodland, notably favouring conifer forests.

In Britain, it is a well-distributed but very scarce and unobtrusive breeder and, like Short-eared Owl, is most often seen outside the breeding season during late autumn arrivals along the east coast of birds from the Continent. The species is a much less common immigrant than Short-eared Owl, however, although very occasional larger influxes may occur. On migration the species can sometimes be encountered, as can Short-eared Owl, coming in off the sea and, likewise, taking temporary refuge on beaches or in meagre coastal cover.

Wintering birds are much more elusive, however – not least due to their more strictly nocturnal and crepuscular habits, but daytime communal roosts in dense woodland and scrub habitat can be found in a few, often traditional, locations. They are, however, vulnerable to disturbance and such roosts are best avoided or kept quiet.

This is also quite a large owl, very similar in size to Short-eared Owl. At rest, typically in a tree or bush, it has a rather vertical posture, particularly when alarmed, combined with a rather dark rufous-brown plumage, a pale orange facial disc and dark longitudinal marks and white eyebrows above bright orange eyes. The 'ear tufts' can be folded down, but when held erect are long and prominent. This combination of features should readily eliminate Short-eared Owl at rest, but their separation in flight can be more difficult.

On a flying Long-eared Owl look for a slightly shorter wing and a slightly broader wing-tip, although the flight action is very similar.

As for plumage, the upperparts may appear a little darker and the contrasting pale patch in the upper primaries can be more richly orange. Importantly, there is no white trailing edge to the wing, a particularly useful feature on a bird going away. Also unlike Short-eared Owl, the underparts are almost wholly streaked and, therefore, look uniformly dark at range with no sign of any contrast between a dark breast and light belly. On the underwing look for a finely barred wing-tip which lacks a solid dark area. Finally, the bars in the uppertail are quite narrow and relatively inconspicuous. 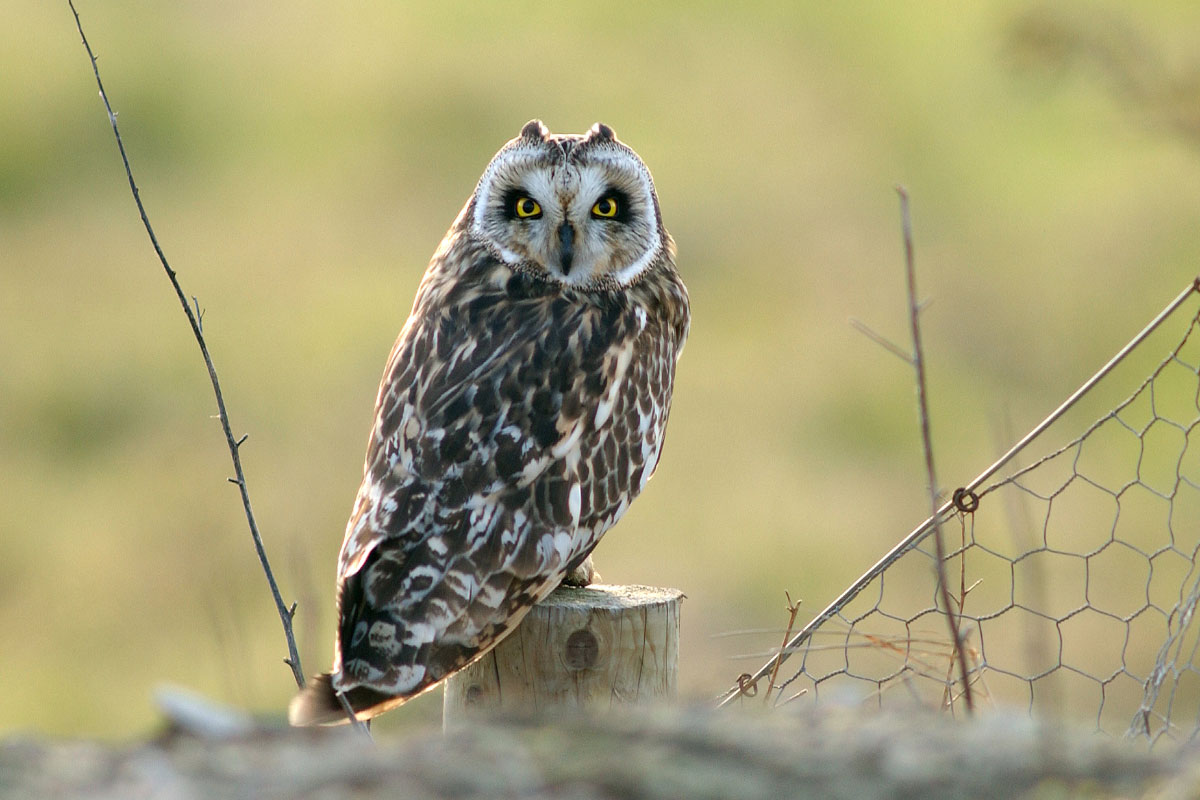 Short-eared Owl (Kinmel, Clywd, 20 February 2005). This Short-eared Owl is adopting a somewhat more upright posture, but its key features are visible just the same. Note again the rather pale, 'cold' feather fringes in the upperparts, the pale facial disc with dark 'panda marks' and of course the brilliant yellow eyes. The 'ear tufts' are shown to better effect here (Steve Young / www.birdsonfilm.com). 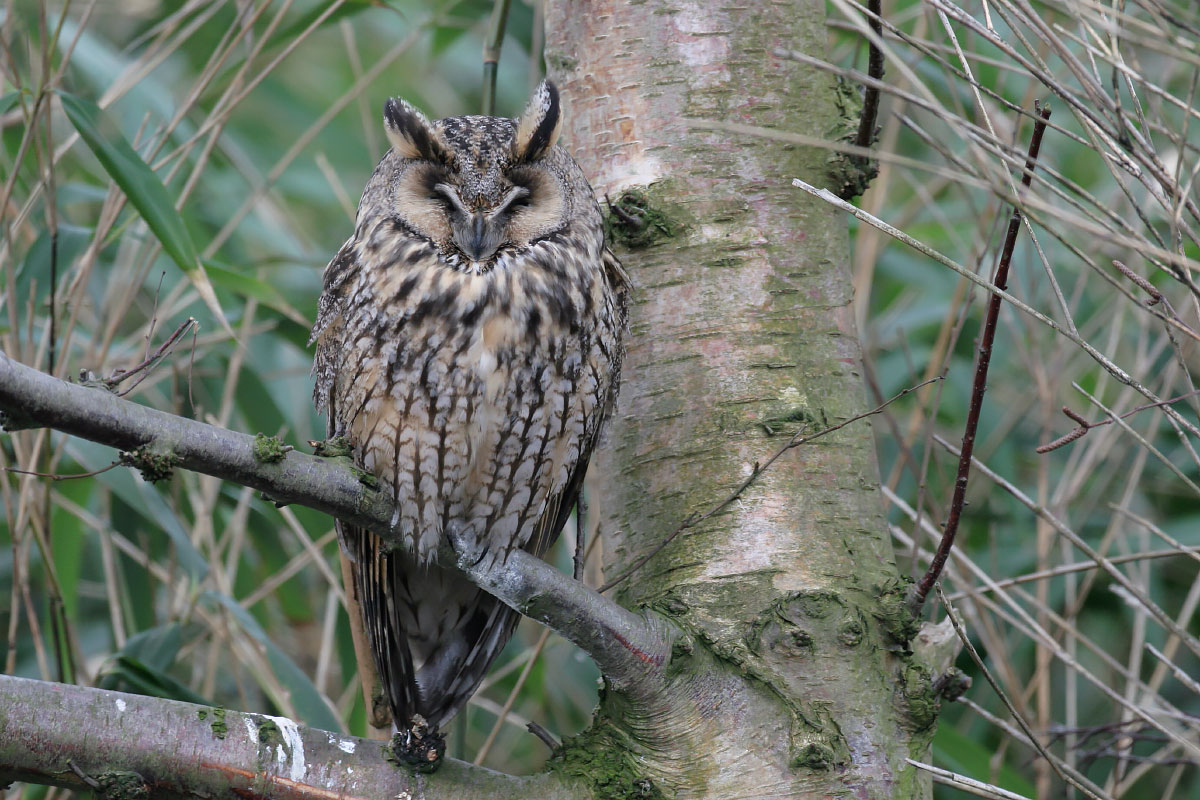 Long-eared Owl (Berkenwoude, The Netherlands, 5 January 2006). The upright vertical posture and the chosen perch close to the trunk of a tree immediately indicate that this is a Long-eared Owl. This can easily be confirmed by a glance at its plumage – note the rather uniformly dark-looking underparts with strong vertical marks, a rather dark facial disc with prominent whitish 'eyebrows' forming a 'V' shape and, of course, long 'ear tufts' (Chris van Rijswijk / www.agami.nl). 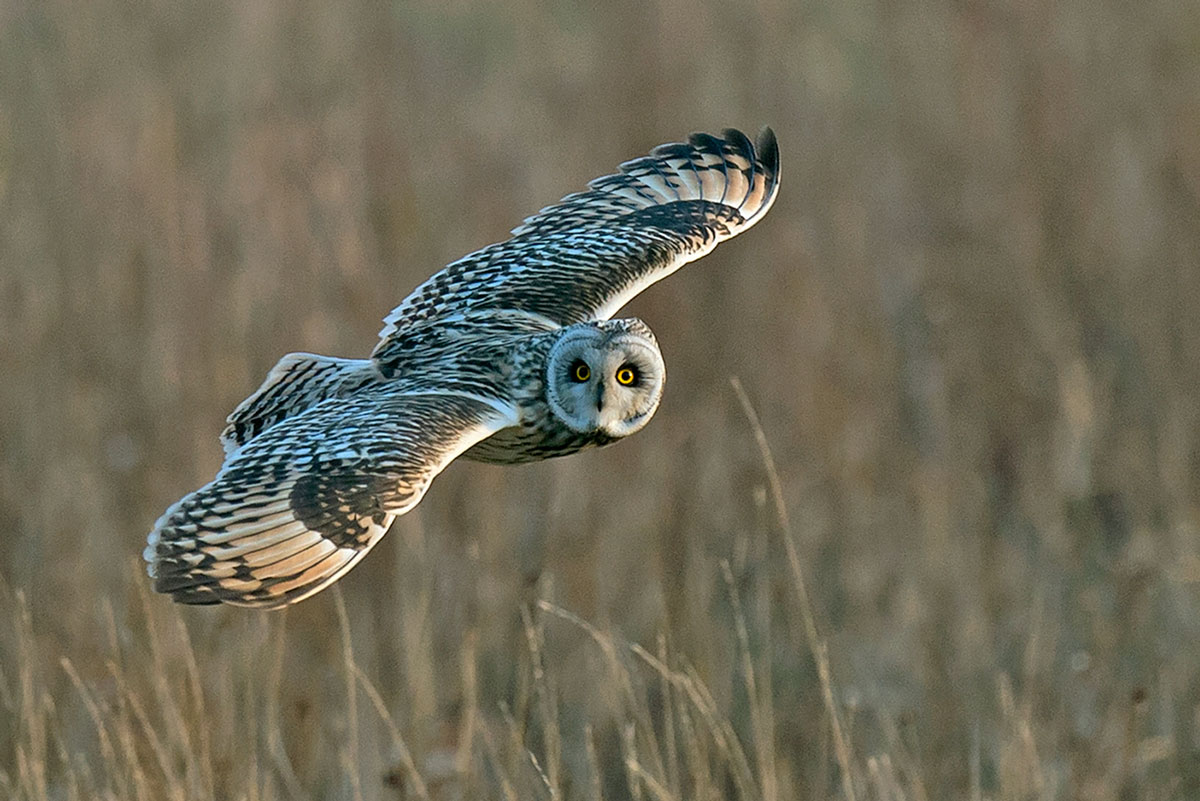 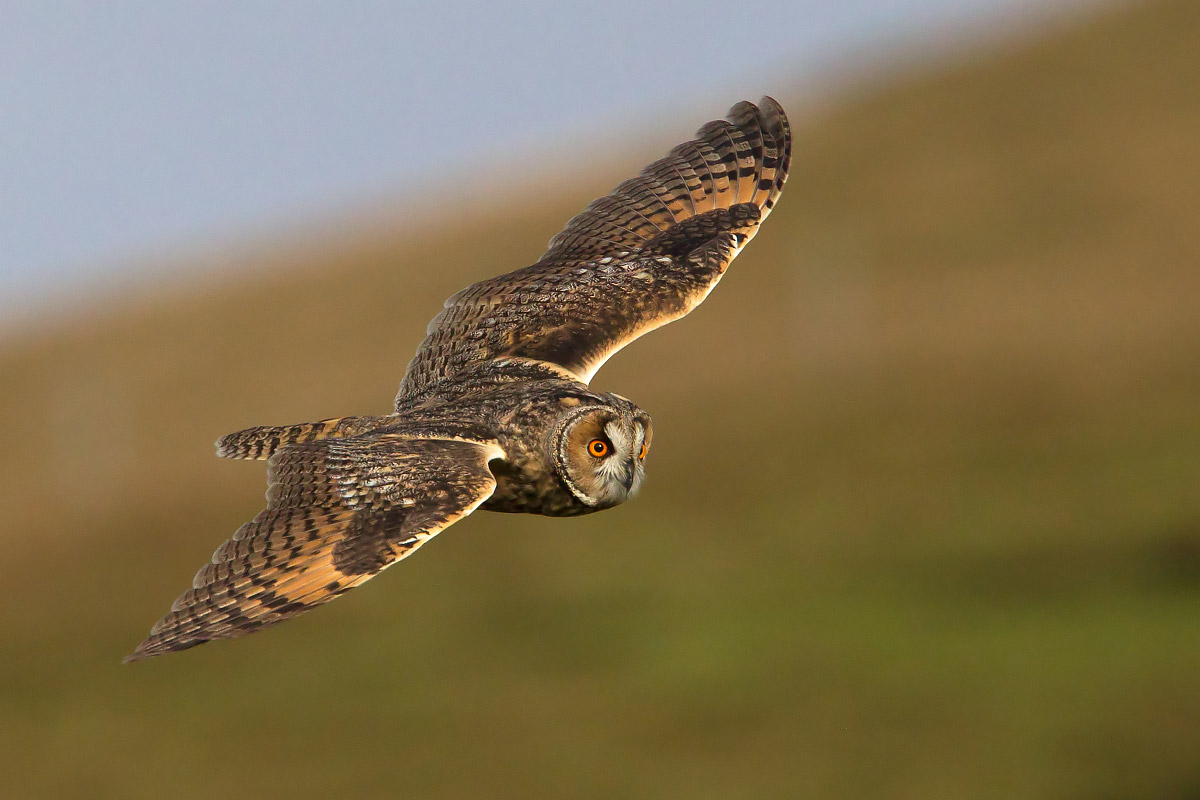 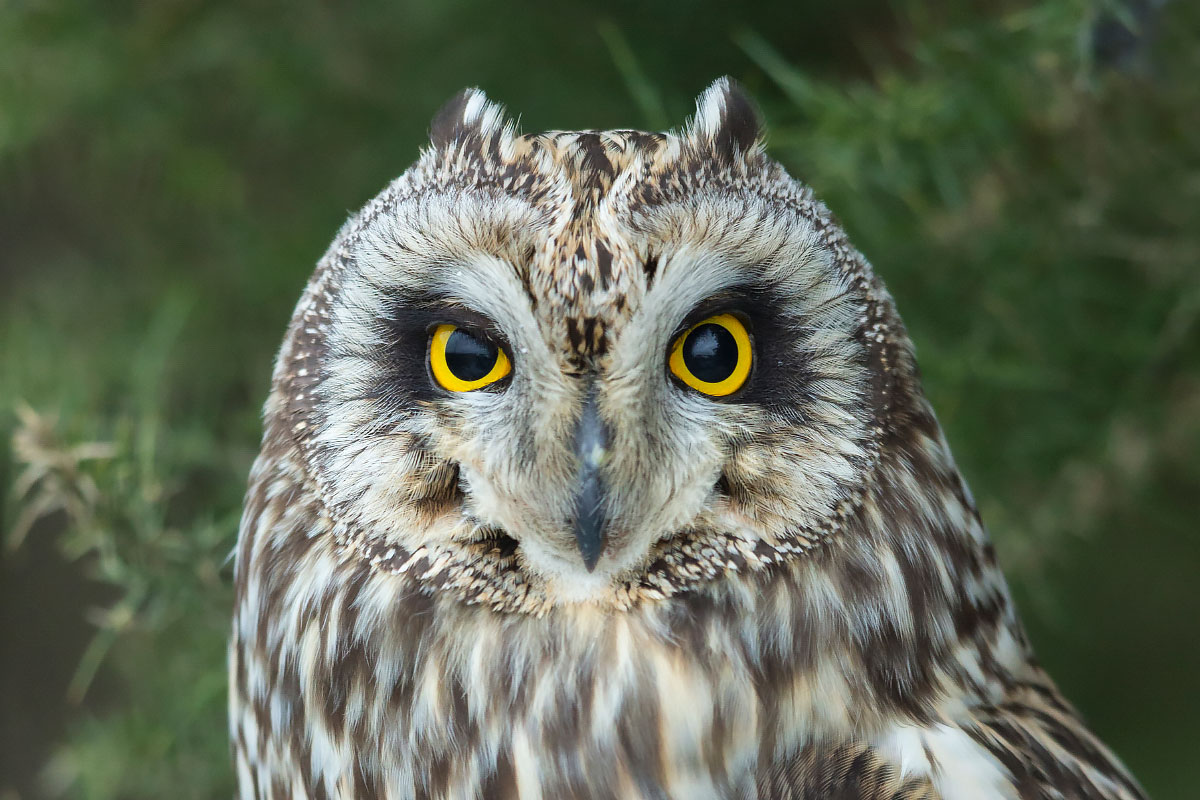 Short-eared Owl (Marlborough Downs, Wiltshire, 11 February 2017). Close up, owl faces are beautiful! This Short-eared Owl shows the typical combination of bright yellow eyes, pale facial disc and blackish 'panda marks' around the eyes. Otherwise note the relative lack of contrast in the face and the absence of any prominent pale 'eyebrows'. Otherwise, the feather fringes to the head and body plumage look typically pale and 'cold' (Oliver Smart / www.smartimages.co.uk). 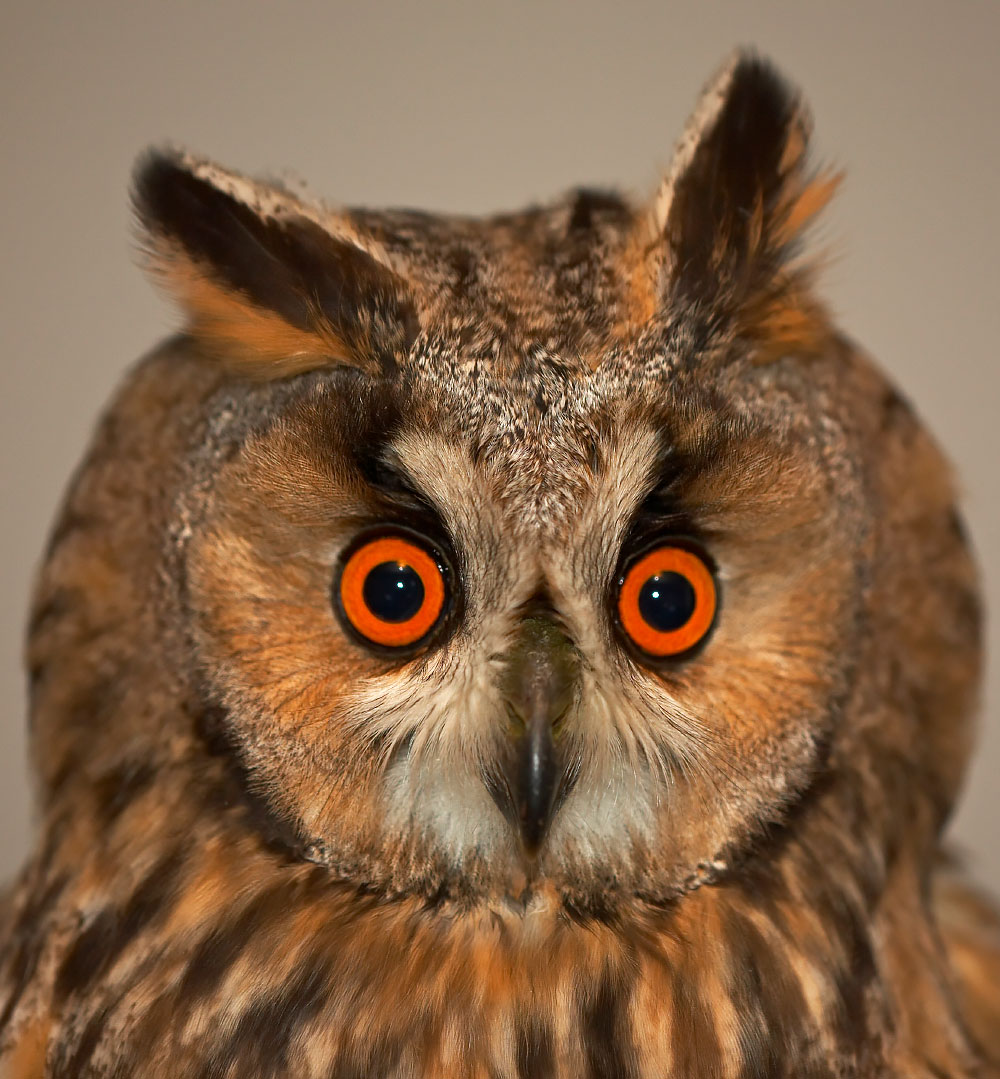 Long-eared Owl (Hanko Bird Observatory, Finland, 26 September 2006). By contrast, the brilliant deep orange eyes of this Long-eared Owl are eye-catching indeed! Note also the rather dark facial disc which lacks dark 'panda marks' but in which the whitish 'eyebrows' are prominent and form an obvious 'V'. The head and body plumage are dark and very warm coloured (Jari Peltomaki / www.agami.nl). 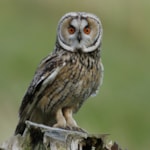 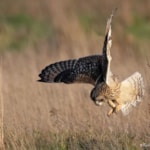