The survey phase of the SeaWatch SW project finished in mid-October, but we are collating Balearic Shearwater records continuously. This update contains information about survey highlights, and other news items recently uploaded onto the project website at SeaWatch SW.

One of the main aims of SeaWatch SW is to provide a central point for Balearic Shearwater recording in UK waters; this will allow us to put project results into a national context. Initial 2007 results are already feeding into ongoing conservation efforts led by RSPB and Birdlife International. We therefore urge anyone who sees a Balearic Shearwater in the UK in 2007 to contact us with details of the sighting, and/or submit their record to BirdGuides. We have already received over 715 records up to the end of October, and are grateful to all observers who have submitted their sightings. 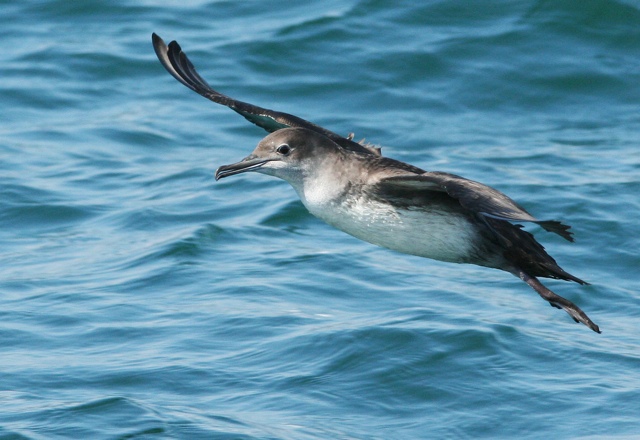 After 92 days and over 1000 hours of continuous observation, the 2007 SeaWatch SW survey at Gwennap Head (Cornwall) finally came to an end on 15th October. About 40 volunteer observers took part in the survey, and the project team would like to thank all of them, in particular those core observers who covered several days and local observers John Swann and Jean Lawman for their invaluable help and advice. Supporting data were also collected from our sister sites at Berry Head (Devon) and Strumble Head (Pembrokeshire) during the survey period. A team of students at the National Oceanography Centre, Southampton, are currently working on various scientific and conservation aspects of the data, and we are aiming to have the 2007 annual report available on this website in early 2008. We are already looking ahead to the 2008 survey, and a call for volunteer observers will be announced here in January.

Basking Sharks hit the headlines again in early September, with reports of up to 460 seen off Land's End on 5th September. This coincided neatly with a count of 72 on the same date recorded nearby at the SeaWatch SW watchpoint, which was the peak count of the entire survey period (mid-July to mid-October). This unprecedented influx may have been the result of a late plankton bloom off the Land's End peninsula, but the SeaWatch SW team are currently analysing weather, sea temperature and plankton data to see if this is really the case. Basking Shark numbers off the Gwennap Head watchpoint dropped rapidly after this influx, and very few animals were seen further north after early September, suggesting that this large aggregation may have been the result of northern sharks moving south and mixing with those already in the southwest, before they all moved offshore into deeper water for the winter.

Balearic Shearwaters were recorded every day off the SeaWatch SW watchpoint between 15 July and 15 October, with the cumulative total reaching 1344 birds. This result underlines the importance of southwest waters for this species. The peak counts were of 72 on 4th August and 62 on 24th September; the early peak is mostly thought to represent non-breeding immature birds, while the late peak probably included a proportion of newly arrived juveniles and post-breeding adults. Even allowing for duplication, it is likely that in excess of 1000 birds passed the SeaWatch SW watchpoint this summer and autumn, providing a useful baseline that can now be compared with future years. Interestingly, peak day counts off Gwennap Head and other key sites were higher in 2006, indicating that even greater numbers were present in UK waters.

The SeaWatch SW team at Gwennap Head saw a variety of spectacular marine animals during September and October, aided by a dominance of calm weather. The core shark observers (Leire Ordorika, Gavin Morrison, Kathryn Driscoll, Trevor Osborne, Emma Rathbone, Gareth Lewis, Jonathan Bills, David Chanter, Charlotte Cooke, Trevor Carpenter, Cecile Chauvel, Marcus and Zoe Ward) were treated to regular sightings of Minke Whales and Risso's Dolphins, as well as hundreds of Common Dolphins, tens of Harbour Porpoises and small numbers of Bottle-nosed Dolphins. However, it seems to have been a relatively poor year for Ocean Sunfish in UK waters, and there were only sporadic reports from the watchpoint despite the generally calm weather. Up to 17 Grey Seals were regularly seen hauled out on rocks to the west of Gwennap Head. Daily updates and images (including videos of Basking Sharks) can be viewed on the Results and Gallery pages of the project website, with full analysis to come later in the annual report.

As expected, a succession of scarce and rare migrant land birds were seen at Gwennap Head (or nearby in Porthgwarra valley) during September and the first half of October. Some of these birds were found by SeaWatch SW observers, while others were quickly visited during lunch breaks! Highlights included a Dusky Warbler, several Yellow-browed Warblers, Dotterel, Wryneck, Tawny and Richard's Pipits, and Ortolan, Lapland and Snow Buntings, Also notable were a Water Rail, up to three Short-eared Owls, a late long-staying Cuckoo, Black Redstart, Ring Ouzel, Dartford Warbler, Firecrest, Pied Flycatcher, and even an escaped Demoiselle Crane. A pair of Choughs was also seen regularly around the watchpoint, frequently feeding within a few metres of the sea-watching team. These birds were colour-ringed, and were offspring from one of the Cornish breeding pairs. Insects included Hummingbird Hawk-moth and several Clouded Yellow and Painted Lady butterflies. Daily reports of those birds found or seen by project observers are on the Results page of the project website, with some images on the Gallery pages.

Nationally, a total of 185 Balearic Shearwater reports was received during September, a slight decrease on the August total. Relatively small numbers were recorded in the first half of the month, but an influx on 20th saw 74 passing Portland Bill (Dorset), with 62 off Gwennap Head on 24th probably representing westwards movement of these birds. Elsewhere, numerous records of up to four birds were again received from North Sea coasts, with one record from North Ronaldsay (Orkney). Numbers rapidly decreased in October with just 45 records received, all from the south and southwest coasts of the UK; the peak count was of 28 off Gwennap Head on 13th. To view the full September and October reports, and other 2007 monthly summaries with distribution maps, visit the Results page of the project website.

Kris Gillam has kindly supplied us with a portfolio of stunning Balearic Shearwater images taken from a boat off the Needles, Isle of Wight, during August. The images are some of the best we have seen of the species taken in the UK, and show birds on the water, flying and plunge-diving. See the Gallery pages of the project website for more details.

A joint press release publicising the increased presence of Balearic Shearwaters in UK waters was issued by the RSPB in October, based upon initial results from this year's SeaWatch SW survey. Reports subsequently appeared in the media, both at a national level, e.g. The Daily Telegraph, and more locally, e.g. The Western Morning News and BBC Radio Cornwall. A copy of the press release is available on the project website.

RAM report for May to July 2007 now online

The 7th report of the RAM project (Iberian Seawatching Network of Seabirds and Marine Mammals) is now available. RAM involves over 100 volunteer observers counting all marine seabirds and cetaceans from Iberian headlands on selected days throughout the year, to provide snapshots of species distribution and abundance. A dedicated page of Balearic Shearwater results reveals that counts of up to 50 birds per hour came from several sites around the Atlantic Iberian coast in May, as birds began to emerge from the Mediterranean. This pattern continued into June, with some large counts around the Straits of Gibraltar and reasonable numbers of non-breeding birds seen off the north Iberian coast. Relatively small numbers were recorded both inside and outside of the Mediterranean during July. To view the RAM report online visit: http://www.telefonica.net/web2/redavesmarinas.