This SeaWatch SW news bulletin provides an update on the latest survey results from Gwennap Head, together with a call for volunteers to fill a couple of gaps in coverage, and news from a 30-day northeast Atlantic pelagic trip that is now underway. Further details at www.seawatch-sw.org.

One of the main aims of SeaWatch SW is to provide a central point for Balearic Shearwater recording in UK and Irish waters; this will allow us to put project results into a national context. 2007-08 results are already feeding into ongoing conservation efforts led by RSPB and JNCC at both a national and international level. We are grateful to all observers who provided us with 2007 records, and urge anyone who sees a Balearic Shearwater in the UK and Ireland in 2008 to contact us with details of the sighting, and/or submit their record to BirdGuides. We have already received over 190 records up to the end of June, compared to 150 records up to this point in 2007. Further details and a distribution map can be found on the Results page of the project website. Note that the July and August Balearic Shearwater reports will be available here in early September. 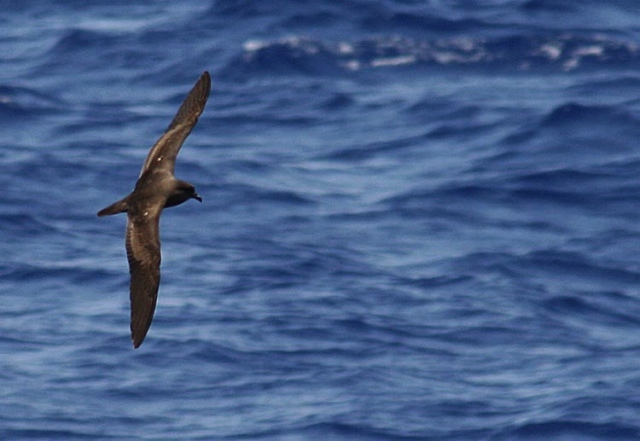 Bulwer's Petrel, photographed near the Selvage Islands from RRS James Cook on 7th August. The SeaWatch SW co-ordinator would have been rather more excited if he had photographed this bird off Gwennap Head a few days earlier! (photo: Russell Wynn).

The SeaWatch SW survey at the Gwennap Head watchpoint (near Land's End in Cornwall) is running from 15th July to 15th October. Daily updates are available on the Results page of the website, and images are now on the Gallery. Our volunteer observer team, comprising experienced Seabird Observers and supporting Marine Wildlife Observers, have averaged 12 hours of observations per day for the first 18 days of the survey. There are still opportunities for volunteer observers and visitors to get involved (also see below), particularly students and conservationists who want to get experience of marine wildlife observation and recording. Detailed directions to the watchpoint, information for potential observers and a provisional observer schedule can be found on the project website.

In late July the SeaWatch SW team recorded a major influx of large shearwaters, as a brief spell of hot settled weather was broken by an incoming low-pressure system with rain and SW winds. Between 29th July and 1st August a total of almost 500 Cory's Shearwaters was seen, as well as small numbers of Great and Sooty Shearwaters. Some of the Cory's Shearwaters were seen being attacked by Great and Arctic Skuas! Balearic Shearwaters have been recorded in relatively low numbers compared to 2007, peaking at 21 on 3rd August. However, Manx Shearwaters have been much more abundant than last year, peaking at 2542 on 24th July. Other scarce seabirds noted in the first three weeks include Pomarine Skua, several juvenile Mediterranean Gulls and a Roseate Tern, while peak day counts of 25 Arctic Terns and 23 Puffins were notable. The first land bird migrants are already heading south, with Grey Heron, Little Egret, Purple Sandpiper, Collared Dove and Wheatear all recorded at the watchpoint in July. Further details on the Results page of the website.

NEW: Ocean Sunfish arrive in numbers, but where are the Basking Sharks?

Up to 40 Ocean Sunfish have been seen in the first three weeks of the survey, with a marked influx on 26th-28th July leading to 26 sightings (including five seen breaching). However, Basking Sharks have only been seen on two days, with up to seven offshore on 28th-29th July. A Minke Whale was noted on 26th July, while other cetacean records have included several sightings of Common and Bottlenose Dolphins and good numbers of Harbour Porpoises (mostly on calm days). Grey Seals have been regularly seen feeding close inshore or hauled out on rocks to the west, but unfortunately we have witnessed (and filmed) two episodes of disturbance by kayakers.

Due to a couple of late changes to the observer schedule, we require an experienced Seabird Observer (familiar with Balearic Shearwater and other target species) to volunteer their time for a three-day period in late August, coinciding with the latter part of the Bank Holiday weekend. The key dates are 24th-26th August, and free B&B will be provided near to the watchpoint at Gwennap Head, Porthgwarra. We also require one or more Marine Wildlife Observers to fill a few small gaps in coverage, particularly 26th-29th August and 1st, 5th, 19th and 21st-22nd September. Further details are available on the Get Involved pages of the website, and if you are interested please contact the project co-ordinator as soon as possible.

Ken Shaw has joined the SeaWatch SW co-ordinator, Russell Wynn, on a scientific expedition to the northeast Atlantic. From 5th August to 3rd September the flagship of the UK research fleet, RRS James Cook, is working far offshore between the Canary Islands and the north Biscay margin as part of a geological research expedition. Ken, as the Marine Wildlife Observer, is recording all seabirds and cetaceans during the trip. Daily updates can be viewed on the Results page of the project website. The first three days have produced large numbers of Cory's Shearwaters and Bulwer's Petrels, as well as Little Shearwater, Madeiran Storm-petrel and White-faced Storm-petrel.