Seawatch SW: Survey is up and Running! 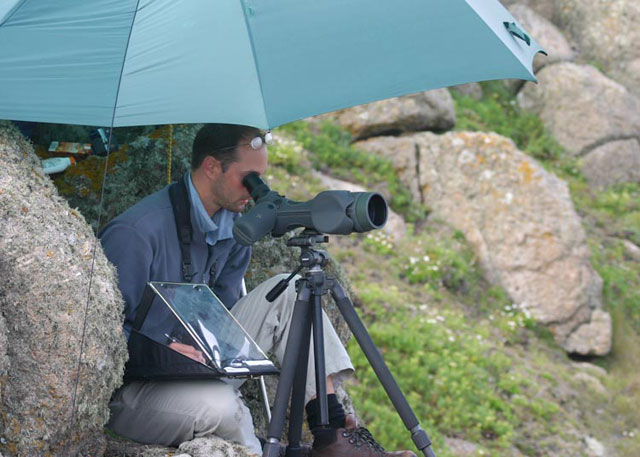 The survey phase of the SeaWatch SW project is now under way; this update contains early results and other news items recently uploaded onto the project website.

SeaWatch SW largely depends upon the efforts of volunteer observers, who will be based at the project watchpoint at Gwennap Head between mid-July and mid-October. The project has generated significant interest and all core observer slots are now full, ensuring continuous ‘dawn-to-dusk’ coverage by experienced observers for the whole three months! However, due to a late withdrawal, we have a gap in core shark observer coverage between Aug 18th-23rd. If you would like to help out by filling in some of the half- or full-day slots during this period please contact the project co-ordinator as soon as possible. In addition, if you are interested in helping out at the watchpoint at any time, please see the project website for more information.

One of the main aims of SeaWatch SW is to provide a central point for Balearic Shearwater recording in UK waters; this will allow us to put project results into a national context. We therefore urge anyone who sees a Balearic Shearwater in the UK in 2007 to contact us with details of the sighting, and/or submit their record to BirdGuides. We have already received 270 records up the end of July, and are grateful to all observers who have submitted their sightings.

The survey phase of SeaWatch SW, based at Gwennap Head, Porthgwarra, began on 15th July. The project co-ordinator, Russell Wynn, acted as core seabird observer from 15th-31st July, assisted by core shark observers Rafe Holmes, Leire Ordorika and Steph Hinder, and several visiting observers. Despite some challenging weather conditions, the team stuck to their task and recorded a spectacular array of wildlife. Highlights included a peak count of 25 Basking Sharks visible at one time, several Minke Whales, regular encounters with Common Dolphins, Harbour Porpoises, Grey Seals and Ocean Sunfish, and even a brief view of a probable Blue Shark jumping clean out of the water while chasing fish! Daily updates and images (including videos of Basking Sharks) can be viewed on the Results and Gallery pages of the project website.

The first 17 days of the project survey at Gwennap Head have seen 1000’s of Manx Shearwaters passing the watchpoint, as well as good numbers of Balearic Shearwaters (see below). Other seabirds seen on most days included Common Scoters, European Storm-petrels, Great and Arctic Skuas, Kittiwakes, Sandwich and Common Terns, Puffins, Guillemots and Razorbills, in addition to the continuous stream of Gannets, Fulmars and Shags. More unusual seabirds included Cory’s and Sooty Shearwaters, an immature Pomarine Skua, several juvenile Mediterranean Gulls, and Roseate, Black and Arctic Terns. Possibly the most spectacular sight was a young Peregrine attacking European Storm-petrels over the open sea for several minutes! Dispersing land birds included a juvenile Green Woodpecker perched on the cliff edge, a first-summer Hobby catching insects over the Porthgwarra valley, and a Grey Heron attempting to land on the sea! Full details on the Results page of the project website.

A total of 274 Balearic Shearwaters was recorded from the Gwennap Head watchpoint between 15th-31st July, with the vast majority of birds moving west. In addition, Balearic Shearwater records from the two sister sites (Berry Head and Strumble Head) and elsewhere in the UK have been coming in thick and fast. The moulting flock off Portland remained until mid-July, and peaked at an impressive 117 birds, while several other double-figure counts came from southwest England. To view the full July report and other 2007 monthly summaries with distribution maps visit the Results page of the project website.

SeaWatch SW featured in the media in early August, after the early results of the survey were distributed in a press release. The project was mentioned in two separate features on the BBC News website, and the project co-ordinator, Russell Wynn, has been interviewed for several radio stations and regional newspapers. In addition, the watchpoint was visited by a steady stream of tourists, some of whom got to see their first Basking Shark! And for the record…..the SeaWatch SW team have failed to see any Great White Sharks in the first 200 hours of observations!

One of the aims of SeaWatch SW is to observe and record instances of harassment of Basking Sharks off the Gwennap Head watchpoint, and elsewhere in the region. Reckless or deliberate disturbance of Basking Sharks is illegal under Schedule 5 of the Wildlife and Countryside Act, and such behaviour can lead to sharks being injured or forced away from a preferred feeding area. Already the team have observed several instances of boat users recklessly disturbing sharks, and a full dossier and the accompanying digital video footage will be passed on to the police. In addition, NOCS student Steph Hinder will be producing a full report on human interactions with Basking Sharks in SW waters towards the end of this year, which will be provided to the Marine Conservation Society and Cornwall Wildlife Trust.

A new paper by Russell Wynn and colleagues about Balearic Shearwaters has just been published in the leading Royal Society journal, Biology Letters. The paper is entitled 'Climate-driven range expansion of a critically endangered top predator in northeast Atlantic waters'. A brief summary is copied below, or contact the project co-ordinator if you would like a PDF copy of the full paper.

Global climate change is having a major effect on northeast Atlantic ecosystems, with warm-water plankton and fish species rapidly advancing northwards as sea temperatures rise. Here, we present a unique dataset showing that recent sea surface warming has also triggered a species at the top of the food chain, the critically endangered Balearic Shearwater, to expand its migration range northwards by over 20% in pursuit of food. Up to a third of the world population of this rare Mediterranean seabird now visits UK waters annually, and early indications suggest that other seabirds are being affected in a similar fashion.

Help the RSPB get the UK Marine Bill into the political front line!

Please help ensure that the UK Marine Bill is part of the Government’s legislative agenda for 2007-08 by securing its inclusion in this autumn’s Queen’s Speech. Data collected during SeaWatch SW and other projects will only reach their full potential if initial Government proposals for Marine Conservation Areas are driven forward. So please log on to the RSPB weblink below and sign their petition: campaignwithus.rspb.org.uk/marine.