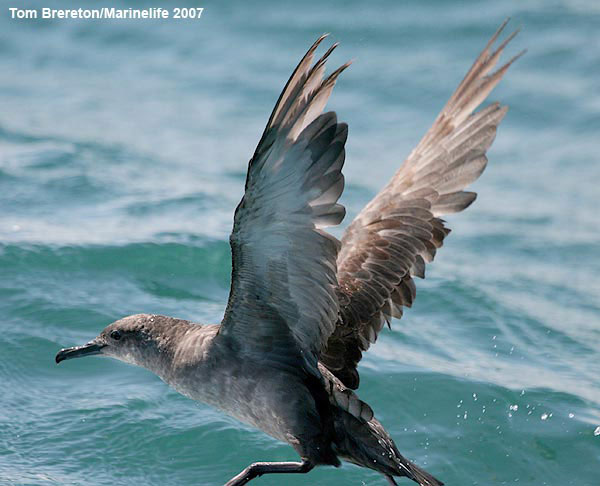 The SeaWatch SW project website has recently been updated with the following news items:

SeaWatch SW depends largely upon the efforts of volunteer observers, who will be based at the project watchpoint at Gwennap Head between mid-July and mid-October. The project has generated significant interest and all core seabird observer slots are now full, ensuring continuous 'dawn-to-dusk' coverage by experienced observers for the whole three months! However, we still have just six days of core shark observer slots remaining to be filled, so if you would like to help out for a few hours (or even a day or two) see the project website for further details.

One of the main aims of SeaWatch SW is to provide a central point for Balearic Shearwater recording in UK waters; this will allow us to put project results into a national context. We therefore urge anyone who sees a Balearic Shearwater in the UK in 2007 to contact us with details of the sighting, and/or submit their record to BirdGuides. We have already received 125 records up the end of June, and are grateful to all observers who have submitted their sightings.

At the time of writing, last-minute preparations are under way for the start of the SeaWatch SW survey, which will be based at Gwennap Head, Porthgwarra. The project co-ordinator, Russell Wynn, will be manning the watchpoint as core seabird observer for the first 16 days, from July 15th to July 31st (this will be over 200 hours of sea-watching!!). He then hands over to Ken Shaw who watches until August 6th. If you want to come and visit us during the survey you can find details of the watchpoint location on the project website.

After an absence of a couple of months, the first Balearic Shearwaters returned to UK coastal waters in mid-May. Most of the 78 records through May and June were of 1-3 birds seen passing watchpoints in southwest England, although a notable flock of up to 50 birds lingered off Portland Bill from mid-June onwards. Monthly reports and distribution maps are on the project website.

On May 25th an experienced local sea-watcher was lucky enough to see a Masked Booby passing the SeaWatch SW watchpoint at Gwennap Head, Porthgwarra. What was almost certainly the same bird had earlier been seen from a boat off Dorset on May 17th and again from St Catherine's Point on the Isle of Wight on May 19th. This is the first British record of this species. On a similar theme, an immature Yellow-nosed Albatross, again a first British record, was picked up exhausted at Brean Beach in Somerset on June 29th. It was taken into care overnight and successfully released at Brean Down the following day. Further details and a link to a video clip of this bird can be viewed here. Intriguingly, other reports of Yellow-nosed Albatross came from Norway and Sweden in late June and early July, so who knows what else might turn up this autumn?

Large numbers of Basking Sharks were reported from southwest England during May and early June, but unfortunately there were also several reports of animals being illegally harassed. Basking Sharks have been protected under UK law since 1998, and it is illegal to kill, injure or recklessly disturb them. Incidents of illegal harassment should be reported to the police, together with any photos or video that may help to identify the offending boats or individuals. In addition, if you see a Basking Shark this year, please submit your sighting to the MCS Basking Shark Watch project.

SeaWatch SW is teaming up with European partners to understand better the dispersal pattern of Balearic Shearwaters in Atlantic waters. The first step is to share data with the team of observers who count birds as they leave the Mediterranean via the Straits of Gibraltar. Westward passage at this watchpoint showed a marked peak in late May and early June; these early departing birds will be non-breeding adults or immatures, and will have contributed to the build-up in numbers off southwest England from mid-June onwards. Further details and latest results of seabird monitoring in the Straits of Gibraltar can be found on the Spanish website.

SeaWatch SW would not be possible without the support of a number of organisations. Grants that are being used to pay for observer accommodation and equipment have been received from RSPB (&pound;1000), Royal Naval Bird-watching Society (&pound;500), SAHFOS (&pound;500) and The Seabird Group (&pound;300). In addition, BirdGuides are sponsoring the project website, Southwest Optics are supplying equipment, and data and logistical support have been provided by the Marine Conservation Society, Cornwall Bird-watching and Preservation Society and Cornwall Wildlife Trust. A big thankyou to all of them!

A new paper by Russell Wynn and Pierre Yésou has just been published in the July 2007 issue of British Birds, entitled 'The changing status of the Balearic Shearwater (Puffinus mauretanicus) in northwest European waters'. A copy of the abstract is available on the project website.

RSPB and Marinelife are leading a boat-based survey of Balearic Shearwaters off southwest coasts this summer and autumn. The aim is to record interactions between Balearic Shearwaters and fishing boats, by placing volunteer observers on the boats themselves. Sightings made during the first survey in Weymouth/Lyme Bay on July 8th included 41 Balearic Shearwaters (see photo above) and a good selection of other seabirds. Full details and additional photos can be found here. Anyone wanting to get involved in these surveys should contact Tom Brereton.

The SeaWatch SW website has further details on the above news items, together with information on project aims and background, a summary of UK sightings of Balearic Shearwaters in 2007, and an identification guide to the species.