As the summer seawatching season rapidly approaches, the SeaWatch SW team are preparing for their final year of intensive survey work. Read on to find out about their activities and how you can get involved. Further details can be found on the project website. 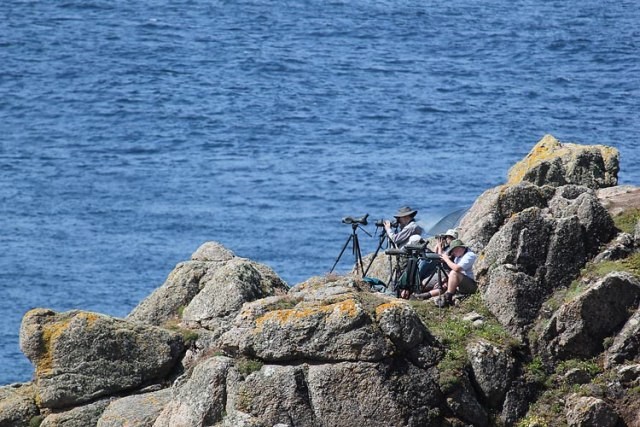 Update on SeaWatch SW activities in 2011

As originally planned, this will probably be the final year of effort-based monitoring at Gwennap Head in southwest Cornwall. By the end of 2011 we will have collected almost 5,000 hours of observations from this strategic watchpoint. Regional context for the data are provided by several thousand hours of observations from our sister sites at Pendeen and Trevose Head (Cornwall), Berry Head (Devon), Strumble Head (Pembrokeshire) and Whitburn (Durham). Together, these observations are providing new insights into the movements of seabirds and other marine wildlife around our coasts. The SeaWatch SW dataset is increasingly being recognised as a unique resource by the science and conservation community, and a team of postgraduate students at NOCS, Oxford and Plymouth are currently assisting with data analysis and interpretation. The aim is to rapidly generate a number of scientific publications and reports that can be used for conservation purposes in the region. SeaWatch SW will continue to undertake fieldwork in the southwest of the UK in 2012 and beyond, but this will be in a more targeted fashion in order to tackle some of the questions thrown up by the existing survey data.

We are inviting keen and experienced Seabird Observers to get involved in SeaWatch SW 2011, between 15th July and 15th October. Seabird Observers are responsible for recording all migratory seabirds and assisting with identification of other marine wildlife. Prior experience of Balearic Shearwaters and other regularly occurring seabirds is therefore required. Highlights of previous years have included Black-browed Albatross, North Atlantic Little Shearwater, Fea's Petrel and Wilson's Storm Petrel, with Balearic Shearwaters seen on 99% of survey days. We already have our regular Seabird Observers in place for much of the survey period, but still have a few days to fill between 1st and 20th August and 25th and 30th September. Free B&B near the watchpoint is provided, as well as travel expenses equivalent to £70 a week. If you would like to get involved, please contact us and help ensure that we have coverage for the entire 93-day survey period for the fifth year in a row. Supporting Seabird Observers are welcome at any time, although due to limited funds we are not able to offer accommodation for supporting observers. See the 'Get involved' page of the project website for more details and an updated observer schedule.

Marine Wildlife Observers (MWOs) are also invited to join us at Gwennap Head during the survey period. MWOs assist Seabird Observers with recording of animals in the water, e.g. Basking Sharks, Ocean Sunfish, cetaceans and seals. We require MWOs to have some prior experience of marine wildlife observation and recording, so this role is ideal for those wanting to gain further experience and to engage in a scientific project. Note that MWOs are responsible for organising their own accommodation and travel. Support Observers are also welcome to visit the watchpoint at any time, whether it is for a few minutes or a few days. Again, see the 'Get involved' page for more details and an updated observer schedule.

STOP PRESS: We also have opportunities for MWOs to get involved in daily boat-based surveys off northwest Cornwall between 5th and 23rd May and in land-based surveys for Basking Sharks and other species at Gwennap Head from 23rd May into June. In both cases, the MWOs will be assisting PhD students with scientific fieldwork activities. Please contact the project co-ordinator via the SeaWatch SW website for further details.

One of the main aims of SeaWatch SW has been to provide a focal point for land-based recording of the Critically Endangered Balearic Shearwater in UK and Irish waters. Our partners at Marinelife are also leading intensive boat-based recording of this species in the English Channel. Data collected between 2007 and 2010 are feeding into ongoing conservation efforts; for example, SeaWatch SW have recently provided input to the updated Balearic Shearwater Species Action Plan. We are grateful to all observers who have provided us with records, and are now in a position to generate a research paper based on data collected in the last four years. We will therefore not be collating UK and Irish records from 1st January 2011 onwards, but urge all observers to submit their records to BirdGuides so they can be extracted and used in the future. A summary of all 2010 Balearic Shearwater sightings will be included in the 2010 SeaWatch SW Annual Report, and the key results of the research paper will be available here once published.

The fourth annual South West Marine Ecosystems (SWME) meeting was held at the Marine Biological Association, Plymouth, on 13th December 2010. About 40 attendees were present, including scientists, students, conservationists and volunteers. The meeting was organised by Dr Russell Wynn of NOCS, supported by PhD students Sophia Butler-Cowdry, Alice Jones and Lavinia Suberg. Speakers covered a range of topics including satellite oceanography, plankton, fish, seabirds, cetaceans, Basking Sharks and Grey Seals. The wealth of marine data being collected from the southwest region is staggering, and it is encouraging to see such a large number of volunteer-based surveys delivering information that can be used for frontline conservation work. A full report of the meeting is now available online.

The SeaWatch SW team undertook a week of fieldwork at Gwennap Head from 16th–22nd January 2011, in order to trial a new theodolite survey method. This will enable accurate mapping of Basking Sharks, cetaceans and seabirds over the offshore Runnelstone Reef. The first day was wet and windy and produced a spectacular westwards passage of over 10,000 seabirds, including 5,000 auks, 3,700 Kittiwakes, 2,000 Gannets and an impressive midwinter count of 29 Balearic Shearwaters. Also rather unseasonable were two Sooty and six Manx Shearwaters, while single Long-tailed Duck, Little Gull and Great Skua were also seen. The weather calmed down in subsequent days, but small numbers of Balearic, Manx and Sooty Shearwaters continued to be recorded, often associating with large numbers of feeding seabirds over Runnelstone Reef. Two Velvet Scoters on 18th and a Peregrine hunting auks offshore on 19th were notable. Land-bird highlights included Hen Harrier, Woodcock, Black Redstart, Snow Bunting and two Choughs. Harbour Porpoises were seen regularly and about 25 were accurately mapped with the theodolite, proving the viability of this method. Other cetaceans included a pod of up to seven Risso's Dolphins on 19th–20th and at least eight Common Dolphins on 19th. Overall, it was a productive week of fieldwork, and demonstrated how southwest Cornwall can deliver great marine wildlife even in the middle of winter. 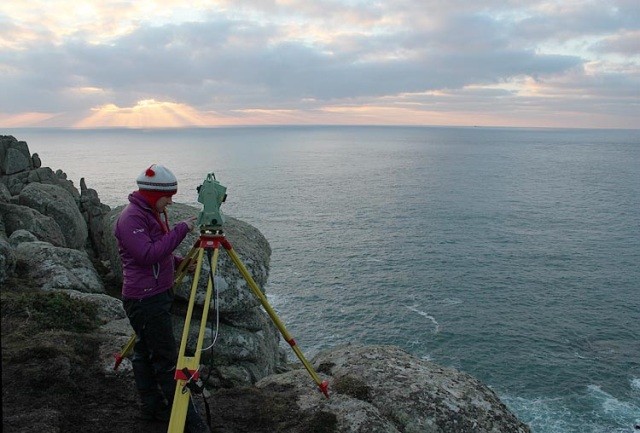 A new PhD student, Rhiannon Meier, will be joining the team from October 2011 to work on a project entitled 'Investigating the at-sea distribution and ecology of the Critically Endangered Balearic Shearwater'. Rhiannon was successful in winning a lucrative NERC-funded studentship and will be supervised by Dr Russell Wynn and Dr Clive Trueman (NOCS), Prof Tim Guilford (University of Oxford) and Dr Steve Votier (University of Plymouth). Her project will be based on tagging and tracking data (geolocators and GPS) and stable isotope analysis of Balearic Shearwaters, in order to determine foraging areas and flyways throughout the year. She joins a team of three PhD students and several Masters students at NOCS, and the PhD project will help strengthen existing links with Oxford and Plymouth.