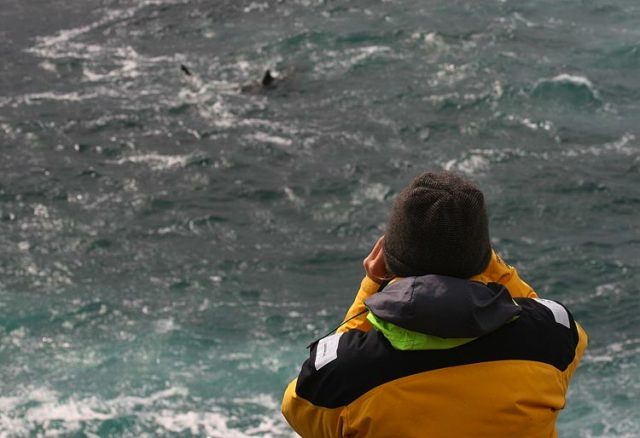 The SeaWatch SW website has recently been updated (www.seawatch-sw.org), with opportunities for keen seawatchers to get involved and an advert for a new PhD opportunity.

We are now inviting keen Seabird Observers to get involved in SeaWatch SW 2010, especially during the survey period at Gwennap Head (near Land's End in Cornwall) between 15th July and 15th October. Seabird Observers are responsible for recording all migratory seabirds and assisting with identification of other marine wildlife. Prior experience of Balearic Shearwaters and other regularly occurring seabirds is therefore required. We already have Seabird Observers in place for much of the survey period, but still have a few days to fill between 1st and 7th August and 22nd and 31st August. Free B&B near the watchpoint is provided, as well as travel expenses equivalent to £70 a week. Previous years have seen Black-browed Albatross, Fea's Petrel and Wilson's Storm-petrel recorded from the watchpoint, and Balearic Shearwaters are seen almost every day. If you would like to get involved then please contact us via the project website, and help ensure we have coverage for the entire 93-day survey period for the fourth year running! Supporting Seabird Observers are welcome at any time, although due to limited funds we are not able to offer accommodation for supporting observers. A separate call for Marine Wildlife Observers will be made shortly. See the Get Involved pages of the project website for more details.

Recent funding developments at National Oceanography Centre, Southampton have allowed us to advertise a PhD opportunity immediately. The PhD project is entitled 'Investigating the influence of tidal-topographic fronts on marine megafauna off southwest UK', and is based around traditional field-based observation of marine megafauna (seabirds, cetaceans and basking sharks). However, the project will also be highly multi-disciplinary, combining elements of marine geophysics and satellite oceanography. The student will join a growing team of postgraduate students at NOCS who are working on SeaWatch SW data. Project supervisors are Dr Russell Wynn (NOCS), Dr Justin Dix (Southampton University) and Dr Simon Ingram (Plymouth University). We are looking for high-calibre applicants with a strong track record in marine environmental science, including a first degree in a relevant subject and potentially also a Masters-level qualification. Online application is via the NOCS graduate school website, but enquiries can also be directed to the project co-ordinator via the SeaWatch SW website. The deadline for applications is likely to be on or around 15th April, with interviews of selected candidates on 22nd April.

One of the main aims of SeaWatch SW is to provide a focal point for recording of the Critically Endangered Balearic Shearwater in UK and Irish waters. Data collected between 2007 and 2009 are already feeding into ongoing conservation efforts at both a national and international level. We are grateful to all observers who have provided us with records, and urge anyone who sees a Balearic Shearwater in the UK and Ireland in 2010 to contact us with details of the sighting, and/or submit their record to BirdGuides.

The SeaWatch SW Annual Report for 2009 is currently in preparation, and is scheduled to be online in April. The report will include a summary of all Balearic Shearwater records from the UK and Ireland during the year (although initial monthly summaries and distribution maps for January–September are available on the Results page of the project website). The report will also contain all data from the SeaWatch SW survey that took place between 15th July and 15th October, with intensive effort-based observations at Gwennap Head supported by sister sites at Berry Head, Pendeen, Trevose Head, Strumble Head and Whitburn. Finally, a summary of boat-based observations off southwest UK will be provided by our partners at Marinelife.

Belated news from the conclusion of SeaWatch SW 2009

The 2009 SeaWatch SW survey at Gwennap Head, Porthgwarra (near Land's End in Cornwall) came to a conclusion on 15th October. The Seabird Observers during this period were Marcus Ward and Russell Wynn, supported by Natalia Lopez, Jason Birt, Trudy Russell, John Swann, Marc Moody, Katherine Heeney, Alice Jones, Chris Stevenson and Stan Stanbury. Good numbers of Balearic Shearwaters continued to be recorded, with peak counts of 78 on 4th October, 52 on 11th October and 91 on 12th October. Other notable seabirds included a Black-throated Diver, three Great Northern Divers, one Red-necked Grebe, 21 Sooty Shearwaters, one Goosander, one Grey Phalarope, eight Pomarine Skuas, two Little Gulls, 40 Mediterranean Gulls, two Yellow-legged Gulls and 15 Puffins. Land birds included a flock of 14 Little Egrets, a Woodcock in off the sea and a variety of raptors including Buzzard, Sparrowhawk, Peregrine, Hobby, Merlin and Kestrel. The Peregrine was seen attacking Feral Pigeons, Razorbills and even a Balearic Shearwater! Marine wildlife sightings included small numbers of Basking Sharks, Ocean Sunfish, Minke Whales, Harbour Porpoises and up to 16 Grey Seals. Small numbers of Risso's, Bottlenose and Common Dolphins were also seen; however, the highlight was a pod of about 25 White-beaked Dolphins moving west on 10th. Daily sightings from the watchpoint can be viewed on the Sightings page of the project website.

The third annual 'South West Marine Ecosystems' meeting, held in Plymouth in December 2009, brought together 40 representatives from the scientific, conservation, fishing and eco-tourism sectors. The aim was to discuss impacts of environmental change and conservation measures on marine life off southwest England. A common theme was the influence of a third successive summer dominated by wet and windy weather, with southwest England particularly affected by a series of Atlantic storms. This led to an unprecedented mid-summer influx of Portuguese Man-o-War onto Cornish beaches, leading to temporary closure of some popular tourist hotspots such as Sennen Cove. The stormy conditions also blew in record numbers of Wilson's Storm Petrel and there were several sightings of the spectacular Black-browed Albatross, including the first in Cornwall for over 20 years. However, the unsettled weather led to a dearth of Basking Shark sightings off southwest UK through the summer and autumn. During stormy conditions, their plankton prey is widely scattered, and it is believed that the sharks may move further north and west in search of more productive waters at these times. In addition, the RSPB reported that the wet, cold conditions could be contributing to low productivity of breeding seabirds such as Kittiwakes. Other conservation topics discussed at the meeting included a study on threatened seahorses in Studland Bay, Dorset, the establishment of a network of Marine Conservation Zones around our coasts, and ongoing efforts to reduce dolphin strandings and bycatch in southwest England. The talk schedule, participant list and abstracts from the meeting can be downloaded from the front page of the project website. Media coverage of the story can be viewed using the links below:

The Total Foundation has recently awarded a grant of £15,000 to Dr Russell Wynn of SeaWatch SW to support studies into the distribution and behaviour of Basking Sharks and Harbour Porpoises around southwest UK. The money will be used for fieldwork over the Runnelstone Reef off Gwennap Head in summer 2010 and 2011, investigating how both species take advantage of particular seafloor and oceanographic features to maximise foraging success. Initial results of SeaWatch SW indicate that Basking Sharks aggregate at the surface in certain areas of the Runnelstone Reef at specific tidal states. Basking Sharks feed on zooplankton, so by undertaking a detailed surface zooplankton sampling programme across the reef margin it is hoped that the link between surface shark sightings, seafloor features and tidal state can be better understood. The results will benefit conservation of Basking Sharks in UK waters, as they are particularly vulnerable to boat strikes when they aggregate at the surface in large numbers. The other target species is the Harbour Porpoise; these are small, elusive cetaceans that are often difficult to see at the surface, especially in rough weather. However, they emit sounds that can be detected by acoustic monitoring devices moored underwater, allowing their occurrence patterns to be compared with traditional visual observations. Two devices (called C-PODs) will be installed in the Runnelstone Reef area to assess how tidal state influences the appearance of porpoises, and to allow comparison of visual and acoustic monitoring methods for this species. The results will hopefully also contribute to the Cornwall Wildlife Trust Netsafe project, which aims to reduce porpoise and dolphin bycatch in fishing gear by encouraging the use of acoustic deterrents attached to fishing nets.

SeaWatch SW data on the Critically Endangered Balearic Shearwater are currently contributing to a number of conservation initiatives, both within the UK and more widely across Europe. These include Marine Conservation Zone planning and attempts to reduce bycatch in longline fisheries. We are also planning an expedition to the Balearic Islands in April 2010 to tag a number of Balearic Shearwaters, in order to better understand their at-sea distribution and behaviour. Further information on this project will be provided in due course. Finally, SeaWatch SW is also continuing to keep Balearic Shearwater conservation in the public eye through continued media engagement. An article (although not 100% accurate!) was released on BBC News Online last autumn.

Keela waterproofs put to the test by SeaWatch SW

Intensive fieldwork carried out by the SeaWatch SW team over the last three years has seen a variety of field gear put to the test in extreme conditions, some successfully, some not. British firm Keela recently provided the project co-ordinator with a hefty discount on their flagship waterproof jacket, the Keela Munro, to see how it compared with more expensive Gore-Tex items. A full review of the jacket can be found on the BirdGuides webzine, together with a review of the Keela Munro salopettes. Initial impressions are that the Munro jacket could be a serious rival to well-established outdoor brands, and may be especially suitable for active sea-watchers.

SeaWatch SW data have already contributed to seven Masters-level student projects at the University of Southampton, and this year we are pleased to welcome Philip Collins to the team. Phil will be acting as a Marine Wildlife Observer at the Gwennap Head watchpoint this summer and autumn, while collecting data for his project on seabird foraging over Runnelstone Reef. The aim is to use foraging behaviour of species such as Gannets and European Storm-petrels to assist our investigations into how the reef margin and tidal flow interact to aggregate zooplankton and fish near the surface at certain times of day. Two additional Masters-level students will also be building upon the work of Dirk Wilyman last year, and investigating the environmental controls behind jellyfish strandings in southwest Cornwall during the summer and autumn. Finally, congratulations to Assistant Co-ordinator Alice Jones, who successfully completed her PhD upgrade at the end of her first year following production of a detailed report on her initial results.