The second half of the 2010 SeaWatch SW survey at Gwennap Head in southwest Cornwall continued throughout September, finishing on 15th October, with the Seabird Observer team comprising John Swann, Tony John, Kevin Bainbridge, Nick Adams, Ken Shaw, Marcus Ward and Russell Wynn. They were supported by several Marine Wildlife Observers, postgraduate students, and visiting birders. This is the fourth year of the 93-day survey, and we now have almost 4,000 hours of monitoring data from this watchpoint. Daily totals are available on the results page of the project website, and a summary of sightings is provided below.

The large numbers of Balearic Shearwaters recorded from Gwennap Head in July and August continued into the second half of the survey period, culminating in a new Cornish record day-count of 268 on 18th September. This is the highest count in the UK and Ireland for over 30 years, and included an impressive flock of 68 birds. The total number of Balearic Shearwaters recorded at Gwennap Head between 15th July and 15th October is just over 3,000, which equates to about 3.0 birds per hour. This passage rate is over twice as high as the rate during the previous three years (2007–09). 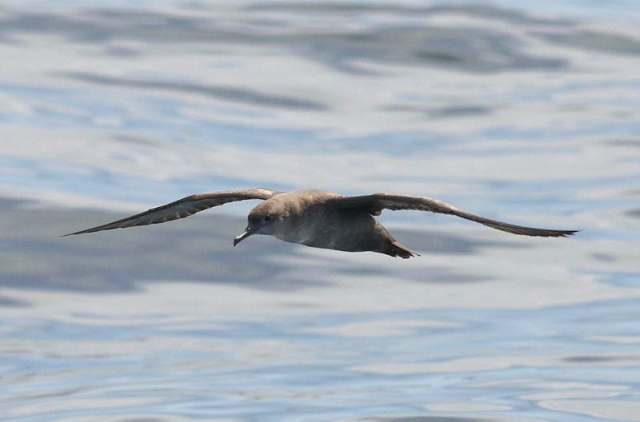 North Atlantic Little Shearwater is a first for SeaWatch SW

Rarity highlight of the 2010 survey was a North Atlantic Little Shearwater (also known as Macaronesian or Barolo Shearwater) seen by Marcus Ward and Phil Collins on 1st October. It was seen feeding over the margin of Runnelstone Reef for 15 minutes, even seen to land on the base of Runnelstone Buoy! The distinctive feeding action (reminiscent of a European Storm-petrel) and the ability to see key plumage features with a 60x lens means this record has a good chance of getting accepted. The description has been submitted to BBRC and can be downloaded here.

On 9th October, in strong east winds and poor weather, two Greylag Geese were seen moving east just offshore of Gwennap Head. One of the birds was seen to be carrying a blue neck collar, and a quick check with the 'scope revealed the letters OEB. A subsequent web search indicated a Swedish origin, and Leif Nilsson kindly confirmed this when he provided the full life history of the bird. After being ringed in Sweden in summer 2000, the goose spent its first eight years commuting between there and wintering grounds in The Netherlands. However, between February and May 2010 it was seen at six widely spaced UK sites between Bedfordshire and Aberdeenshire. It then presumably returned to Sweden but was back in the UK at Grove Ferry in Kent on 20th September before passing Gwennap Head on 9th October and then being seen at the Hayle Estuary from 13th October. 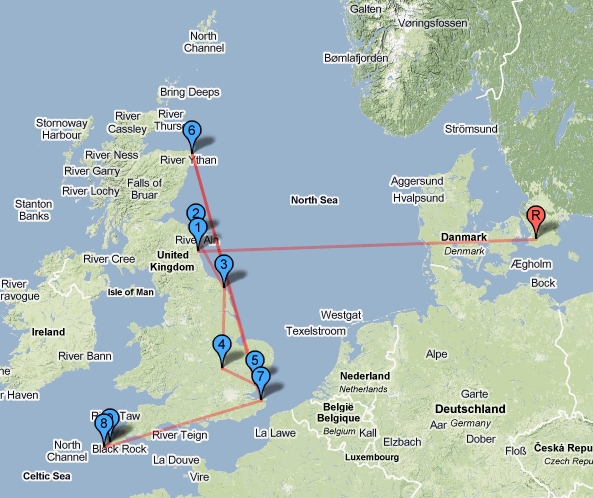 There was further interest when, on 14th October, a wing-tagged Red Kite gave fantastic views as it circled low over the watchpoint allowing a series of detailed photos to be taken. A quick online check of the tag colours revealed that this was a juvenile bird that had been tagged in the East Midlands (Rutland) during summer 2010. Following on from the French colour-ringed Kittiwake in August, these two latest sightings made it a nice trio of recoveries. 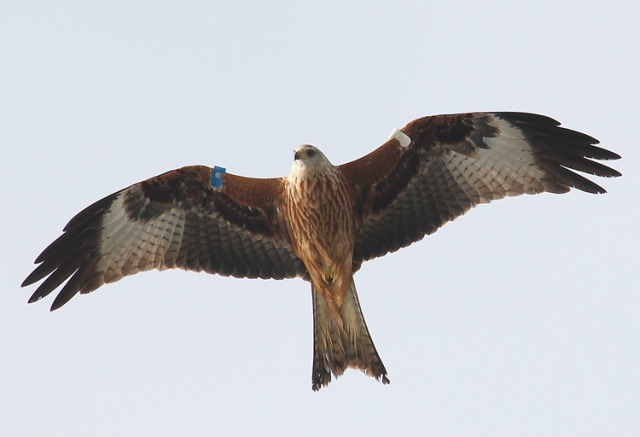 This wing-tagged Red Kite over Gwennap Head had been ringed in Rutland (photo: SeaWatch SW)

Notable land birds seen at Gwennap Head in September and October included almost daily sightings of up to four Choughs, three Little Egrets, regular Peregrines (including a juvenile seen chasing a Robin amongst the rocks), up to three female/immature Merlins, single Marsh Harrier (2nd September) and Short-eared Owl (in off the sea on 13th October), six Ring Ouzels (10th October) and a Black Redstart. Unusual records included a Swift that flew in off the sea on 5th September and, apparently exhausted, landed in a crevice, and a migrant Kingfisher in Porthgwarra Cove on 17th September. Scarce migrants seen by SeaWatch SW observers in nearby Porthgwarra Valley included Dotterel, Short-eared Owl (two), Wryneck, Firecrest (two), Red-breasted Flycatcher (two), Ortolan Bunting and Lapland Bunting (at least three). Finally, a Western Conifer Seed Bug photographed at the watchpoint on 11th October was part of an influx of this invasive species into southwest Cornwall. 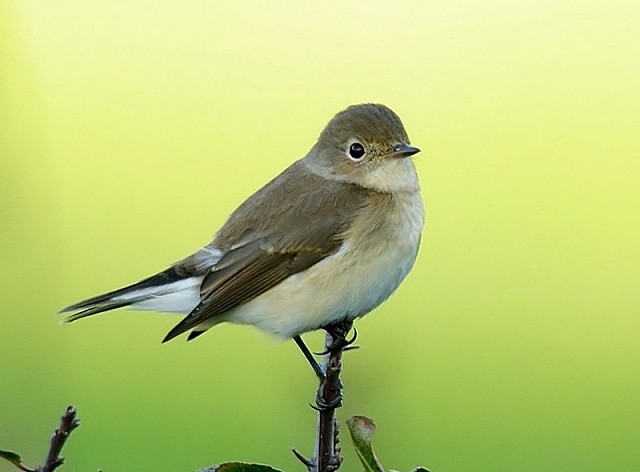 Basking Sharks peak in September for the fourth year in succession

As in the last three years, Basking Sharks sightings off Gwennap Head peaked in mid-September. The highest count was 21 (mostly moving west) on 17th September, coinciding with 100+ Common Dolphins, 10+ Harbour Porpoises and a Minke Whale. The following day saw at least three Minke Whales, 150+ Common Dolphins and 15+ Harbour Porpoises. This multi-species aggregation coincided with the peak Balearic Shearwater influx, indicating plentiful food resources in the area at that time. Other cetaceans included up to three Risso's Dolphins on three dates and up to eight Bottlenose Dolphins. Just three Ocean Sunfish were seen, while Grey Seals peaked at 20 (with one seen eating a Conger Eel).

The SeaWatch SW sister sites made a number of interesting observations in the period 1st September to 15th October, all reported to BirdGuides. At Berry Head, south Devon, the best sea-watching occurred in late September and early October with, for example, a Long-tailed Skua, two Roseate Terns and good numbers of Arctic and Great Skuas on 29th September. The peak count of Balearic Shearwaters was 23 on 7th October, with 41 passing nearby Start Point on 10th September. At Pendeen, northwest Cornwall, the peak counts of Balearic Shearwaters were 56 on 12th September and 55 on 15th September. Other scarce seabirds reported there included a possible North Atlantic Little Shearwater on 9th September and several Leach's Petrels, Grey Phalaropes (peak of nine on 23rd September), Long-tailed Skuas, Sabine's Gulls (peak of six on 15th September) and Black Terns (peak of seven on 23rd September). A Basking Shark was seen on 26th September. Notable land birds included Red-throated Pipit, Rose-coloured Starling, Firecrest, and Ortolan, Lapland and Snow Buntings.

On 1st October, representatives from SeaWatch SW and Marinelife attended a meeting in Dinard, Brittany, sharing results and future plans for monitoring of marine megafauna in the English Channel. Much of this work is being undertaken as part of the EU-InterReg CHARM III project. There was a particular focus on cetaceans and seabirds, in particular the Balearic Shearwater. Up to 25% of the world population of was discovered using the coastal waters off northwest Brittany in summer 2010, and a detailed monitoring programme led by local French and British ornithologists has been proposed for 2011. This programme will also involve the general public, especially local fishermen and boat users. A joint funding proposal has also been submitted that, if successful, will enable detailed satellite tracking of Balearic Shearwaters in the English Channel.

One of the main aims of SeaWatch SW is to provide a focal point for land-based recording of the Critically Endangered Balearic Shearwater in UK and Irish waters. Our partners at Marinelife are also leading on intensive boat-based recording of this species in the English Channel. Data collected between 2007 and 2009 are already feeding into ongoing conservation efforts; for example, SeaWatch SW have recently provided input to the updated Balearic Shearwater Species Action Plan. We are grateful to all observers who have provided us with records, and urge anyone who sees a Balearic Shearwater in the UK and Ireland in 2010 to contact us with details of the sighting, and/or submit their record to BirdGuides.

The SeaWatch SW Annual Report 2009 is now online and can be downloaded from the project website. This 118-page report, illustrated throughout with colour images, includes a summary of all Balearic Shearwater records from the UK and Ireland during the year. The report also contains all the data from the SeaWatch SW survey that took place between 15th July and 15th October 2009, with intensive effort-based observations at Gwennap Head, Porthgwarra, supported by sister sites at Berry Head, Pendeen, Trevose Head, Strumble Head and Whitburn. Finally, a summary of boat-based observations in the western English Channel has again provided by our partners at Marinelife. A shorter version containing a summary of key results is also available.