The SeaWatch SW team had a busy time during August and September, with a variety of rare seabirds, good numbers of Balearic Shearwaters, and lots of interesting marine wildlife sightings. 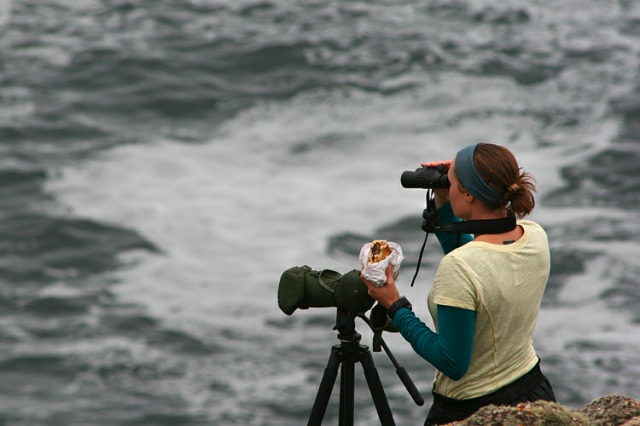 One of the main aims of SeaWatch SW is to provide a focal point for recording of the Critically Endangered Balearic Shearwater in UK and Irish waters. Data collected in 2007/08 are already feeding into ongoing conservation efforts led by RSPB and JNCC at both a national and international level. We are grateful to all observers who have provided us with records, and urge anyone who sees a Balearic Shearwater in the UK and Ireland in 2009 to contact us with details of the sighting, and/or submit their record to BirdGuides.

Balearic Shearwater numbers during August were generally unexceptional, although there was a good scatter of sightings from Irish and North Sea coasts. The only counts to exceed ten came from headlands in Cornwall and Devon, with a peak of 37 off Porthgwarra (Cornwall) on 27th. A single flock of 18 passing Start Point (Devon) on 31st was notable. Early September saw numbers build further in southwest England, culminating in a Devon record of 145 off Berry Head on 2nd (further details on this exceptional influx can be found below). A withdrawal was noted after the first week, with Porthgwarra in the far southwest being the only site to record more than 40 birds in a day. Two records from Highland and two from Orkney during September were noteworthy; how long before the first Shetland record? The monthly summaries and distribution map can be found on the Results page of the project website.

The 2009 SeaWatch SW survey at Gwennap Head, Porthgwarra (near Land's End in Cornwall) continued throughout August and September. The period was notable for extreme highs and lows, with a memorable few days in late August and early September producing three sightings of Fea's Petrel! At other times things were less busy, with the 15th September probably being the quietest day ever for SeaWatch SW! Nevertheless, all observers got to see Balearic Shearwater and a good variety of marine wildlife. The highlights are described in more detail below, while the daily sightings and observer details from the watchpoint can be viewed on the Results page of the project website.

On 1st August an unprecedented influx of Wilson's Storm-petrels occurred in southwest UK and Ireland, with more than 60 birds recorded. The observers at Gwennap Head (Russell Wynn and John Swann) managed to pick out at least two birds feeding offshore with European Storm-petrels. Land-based sightings of this tiny seabird are still extremely rare, and a link to a full description can be found on the front page of the project website. However, even more exciting was the trio of Fea's-type Petrel sightings in a four-day period between 30th August and 2nd September (James McCallum, John Swann and Russell Wynn). It is not clear whether one, two or three birds were involved in these sightings, but the fact that the second bird was tracked flying west between Prawle Point and Gwennap Head, the day after the first bird was seen, suggests that at least two were involved. A full description of the bird seen on 31st August can be found via the link on the front page of the project website. In addition, there were four reports of Yelkouan-type Shearwaters off Gwennap Head during August and September. However, until a full review of the field identification of Balearic, Yelkouan and 'Menorcan' Shearwaters is carried out (watch this space), the specific identification of most of these birds remains uncertain. Finally, the SeaWatch SW sister sites also got in on the act, with reports of Little Shearwater (Pendeen), Yelkouan-type Shearwater (Pendeen and Berry Head), Madeiran Storm-petrel (Pendeen) and Wilson's Storm-petrel (Pendeen and Strumble Head), making it one of the best autumns ever for rare seabirds off the southwestern UK.

Superpod of Common Dolphins seen off Gwennap Head in August!

One of the highlights of the survey period was the appearance of a 'superpod' of Common Dolphins off the Gwennap Head watchpoint in mid-August. Over 140 were seen on 14th August and the following day between 200 and 700 were present offshore. This impressive influx was even covered by the local media. Minke Whales were absent during August but recorded on 17 dates in September, involving up to five animals. The only report of Risso's Dolphin was four on 30th September. Two large pods of 20–30 Bottlenose Dolphins were seen, and there were regular sightings of Harbour Porpoise with a peak of at least 16 on 26th September. In contrast, Basking Sharks were again very scarce, with a peak of just 13 on 25th September. Finally, a total of 11 Ocean Sunfish were noted, while Grey Seals at the nearby haulout peaked at 24 on 20th September. Full details can be found on the Results page of the project website.

Balearic Shearwaters and other scarce birds seen from Gwennap Head

A steady stream of Balearic Shearwaters was recorded passing the Gwennap Head watchpoint during August and September, with peak counts of 84 on 26th–27th August, 64 on 2nd–3rd September, 81 on 7th–8th September, 70 on 22nd–23rd September and 45 on 28th September. A clear pattern is now emerging for this species, with several days of relatively low numbers (i.e. up to 20 birds per day), interspersed with one- or two-day bursts of elevated numbers (over 40–50 per day). A large influx of Sooty Shearwaters occurred on 2nd September with 109 seen off Gwennap Head, although even larger numbers were pushed onto the coast of Devon and Dorset (see below). However, Cory's and Great Shearwaters were surprisingly scarce, with just occasional sightings of up to four birds. There were good numbers of Puffins (peak 18 on 1st August) and Mediterranean Gulls (peak 10 on 17th August), and occasional sightings of Black-throated Diver, Great Northern Diver, Grey Phalarope, Pomarine Skua, Little Gull, Sabine's Gull and Black Tern. The clear 'land' bird highlight was a fly-over Purple Heron seen by Ken Shaw on 16th September, during his lunchtime walk through Porthgwarra valley. Other notable birds recorded from the watchpoint included Little Egret, Grey Heron, Marsh Harrier, Merlin, Peregrine, Black-tailed Godwit, Purple Sandpiper, Common Sandpiper, Green Woodpecker and Pied Flycatcher. Full details can be found on the Results page of the project website.

Record influx of scarce shearwaters in Devon and Dorset!

The increase in pelagic birding trips in recent years has resulted in some exceptional images of Balearic Shearwater being taken off southern England (some examples can be seen on the Gallery pages of the project website and in SeaWatch SW annual reports). On 25 July, Paul Gale attended a Naturetrek boat trip off Portland Bill (Dorset) and produced a portfolio of images that must rank amongst the best yet. Paul's images also highlight how pale Balearic Shearwaters can appear underneath. The images can be viewed at: www.galleryofbirds.com/Europe/Balearic%20Shearwater.htm.