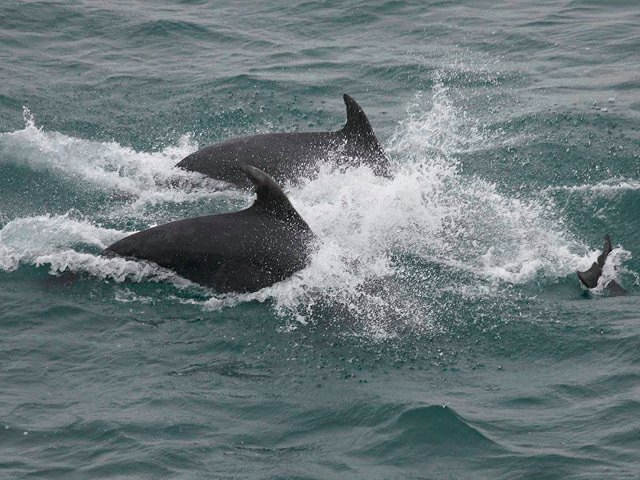 One of the main aims of www.seawatch-sw.org is to provide a focal point for recording of the Critically Endangered Balearic Shearwater in UK and Irish waters; this will allow us to put project results into a national context. Data collected in 2007/08 are already feeding into ongoing conservation efforts led by RSPB and JNCC at both a national and international level. We are grateful to all observers who have provided us with records, and urge anyone who sees a Balearic Shearwater in the UK and Ireland in 2009 to contact the project co-ordinator via the website with details of the sighting, and/or submit their record to BirdGuides.

A total of 69 Balearic Shearwater records were received for the first quarter of 2009 and, as with the previous two years, the majority came from southwest England between Cornwall and Dorset. For the third year running there was a marked influx into southwest waters in January, associated with large numbers of other seabirds such as auks and Kittiwakes. No count exceeded six, although notable records included the first winter record for the Isle of Wight and the first January record for East Sussex. A Marinelife survey in Lyme Bay on 19th Feb not only produced a Balearic Shearwater, but also close views of a highly unseasonable Great Shearwater (with possibly the same bird seen from the SeaWatch SW sister site at Trevose Head earlier in the month). Monthly summaries and distribution maps can be found on the Results page of the project website.

A total of 45 Balearic Shearwater records were received for the second quarter of 2009. Just a single bird was seen in April, but small numbers of 'returning' birds were then seen from 7th May onwards, mostly in southwest England. The peak count was five off Portland Bill (Dorset). The only records away from southern UK were single birds off Norfolk and Waterford (southern Ireland). The June total of 16 records was a marked reduction compared to 2007 and 2008. The peak count was again just four birds off Portland Bill. The dominance of hot settled weather throughout much of June may have been responsible, due to a combination of reduced observer effort and possibly a lack of suitable conditions for long-distance foraging movements. It will be interesting to see if numbers pick up during July, especially if the weather becomes more unsettled. Monthly summaries and distribution maps can be found on the Results page of the project website.

For the third year running, SeaWatch SW will be conducting intensive monitoring off Gwennap Head (near Land's End in Cornwall) from 15th July to 15th October. Seabird Observers will be manning the watchpoint from dawn to dusk for the entire 93 days, and we are pleased to welcome back several familiar faces (Nick Adams, Kevin Bainbridge, Ken Shaw, John Swann, Tony John, Marcus Ward and Russell Wynn) and some new recruits (Andy Gibb, Derek Julian and Tristan Reid). The Seabird Observers are supported by Marine Wildlife Observers, including two NOCS-based students using SeaWatch SW data (Alice Jones and Natalia Lopez). Note that keen volunteers of any experience level are still invited to take part as Marine Wildlife Observers; further details and an updated observer schedule can be found on the Get involved page of the project website. In addition, make sure you keep an eye on this website for daily sightings updates. In addition to the Gwennap Head survey, intensive land-based observations will also be carried out at our three sister sites: Berry Head (Devon), Trevose Head (Cornwall) and Strumble Head (Pembrokeshire).

Colleagues at Cornwall Wildlife Trust are collaborating with SeaWatch SW this year, and have been co-ordinating a Basking Shark survey at Gwennap Head that commenced on 1st June. Volunteer observers have been treated to some fantastic views of sharks feeding just a few metres offshore, and even occasionally breaching. Initial result suggest that June has been a good month for surface shark sightings off southwest Cornwall — certainly better than the previous two years when unsettled weather led to a dearth of shark sightings during the mid-summer period. The CWT survey team have also been recording other animals in the water, and have seen several Ocean Sunfish and Harbour Porpoises, and even a Leatherback Turtle. Will the run of shark sightings continue after 15th July when SeaWatch SW observers take over at the watchpoint?

SeaWatch SW has recently secured funding to undertake research into what controls the appearance of Basking Sharks off the Gwennap Head watchpoint. Project work undertaken by Masters-level students from NOCS, using 2007 and 2008 SeaWatch SW data, has revealed that Basking Shark appearances off the watchpoint are influenced by tidal state and the rugged topography of the offshore Runnelstone Reef. This year we will be sampling the sharks' prey (particularly small crustaceans called copepods, that form part of the zooplankton) over different reef environments at various stages of the tidal cycle. The results will help us understand what controls surface appearances of this Endangered species at one of their UK hotspots, and will help inform ongoing conservation strategy.

SeaWatch SW co-ordinator, Russell Wynn, and the Berry Head site co-ordinator, Mark Darlaston, both ventured north in the first half of May to search for spring skuas and other migrants. Russell visited the remote Shetland island of Foula, and recorded small numbers of Pomarine Skuas during stormy weather early in the month, as well as a trio of rare trans-Atlantic vagrants (Solitary Sandpiper, Laughing Gull and Pectoral Sandpiper). Mark focussed on the Outer Hebrides and, in the same stormy weather in early May, was treated to some excellent passage of Pomarine and Long-tailed Skuas. He also found White-billed Diver and a good variety of other wildlife. A link to the illustrated PDF of Mark's trip report can be found on the front page of the project website. Russell's Shetland trip report can be found on the BirdGuides webzine (and is available to non-subscribers until 15th July).

A new report is now available online outlining the results of intensive monitoring from the Estace de Bares headland in Galicia, northwest Spain during 2008. This headland is well placed to observe westwards seabird migration through the southern Bay of Biscay in the summer and autumn. The survey team recorded 282,198 birds in 519 hours of observations, mostly concentrated in the August to November period, with the commonest species being Gannet, Manx Shearwater, Cory's Shearwater, Common/Arctic Tern, Kittiwake and Sooty Shearwater. The results for some of the most abundant species provide an interesting comparison with the 2008 SeaWatch SW data from Gwennap Head. Some species peaked at roughly the same time at the two sites, e.g. Balearic Shearwater, Arctic Skua, Sandwich Tern and Common/Arctic Tern, with the skuas and terns appearing to move rapidly south in a short period in late August and early September. However, some species peaked markedly later off northwest Spain, e.g. Manx Shearwater, with most birds having left southwest UK by late August, but the main passage through southern Biscay occurring in September. Analysis of these patterns in future years may provide insights into migration strategies of certain species, complementing recent tagging-based studies. The report is in Spanish and is packed full of tables, graphs and beautiful line drawings, and is well worth a look. It can be downloaded here.

Do you want your local patch to become a SeaWatch SW sister site?

To support the intensive effort-based survey at Gwennap Head, a series of sister sites has been established around southwest UK to put sightings into a regional context. Existing sister sites include Berry Head (Devon), Trevose Head (Cornwall) and Strumble Head (Pembrokeshire). We are now looking to include other well-watched sites across the UK and Ireland. So if you are a keen seawatcher and you anticipate covering a local site for more than 100 hours between 15th July and 15th October 2009, we would love to hear from you! Data will be used to assist in science and conservation-based studies of the Critically Endangered Balearic Shearwater and other migratory seabirds. The only requirement is to record the number of hours watched each day and the number of each species recorded. To get an idea of how the data are used see the 2008 Annual Report, and contact the project co-ordinator via the website if you would like further details.