SeaWatch SW 2011 survey is now over

The 2011 SeaWatch SW survey at Gwennap Head (near Land's End, Cornwall) started on 15th July and finished on 15th October, and daily sightings can be viewed here. Results from the first month of fieldwork were summarised in the previous news update, and observations from 16th August onwards are provided below. Seabird observers on duty during this period included John Swann, James Wilkinson, Pete Griffin, David Norman, Kevin Bainbridge, Ken Shaw, Nick Adams, Tony John, Russell Wynn and Marcus Ward. A number of postgraduate students and volunteers also assisted as Marine Wildlife Observers during this period. We would like to say a big thank you to all SeaWatch SW observers during 2011, particularly those who have participated in every year since 2007!

The SeaWatch SW team recorded unprecedented numbers of Balearic Shearwaters off the southwest UK this autumn. The first significant influx occurred on 3rd September with 101 seen off Start Point, and numbers then rapidly built up in western Lyme Bay with peak counts including at least three hundred of Berry Head on 5th–6th September — part of a feeding flock of several thousand Manx Shearwaters — 376 off Orcombe Point on 11th September and a new Devon record of 383 moving southwest off Start Point on 12th September. Many of these birds apparently continued westwards, as a total of 416 were seen moving west off Gwennap Head on 12th–13th September. Up to 200 Balearic Shearwaters continued feeding in Lyme Bay on 15th–16th September (including counts of 50+ birds following trawlers off Berry Head) and it is possible that the westward exodus of these birds contributed to a new Cornish record day count of 283 passing Gwennap Head on 18 September. Few remained in Lyme Bay after this date but good numbers continued to circulate off Gwennap Head, with three day counts of 150—200 in the period from 19th–26th September. It is likely that over 600 birds were present off Devon and Cornwall in mid-September, highlighting the increasing importance of this region for this Critically Endangered seabird. A short note on this influx is due to be published in British Birds in early 2012.

The other seabird highlight of the autumn was an incredible count of 2,000+ Great Shearwaters on 3rd September, one of the highest day counts ever made in the UK. Seabird Observer Kevin Bainbridge was on duty at the time and, despite getting absolutely soaked in the torrential rain, described it as one of his best day's seawatching ever! Most of the birds were seen in the last two hours of daylight, and at one stage there were so many passing through and lingering offshore that they were impossible to count accurately! The following day a further 154 were seen but outside of this two-day period only five Great and nine Cory's Shearwaters were recorded. 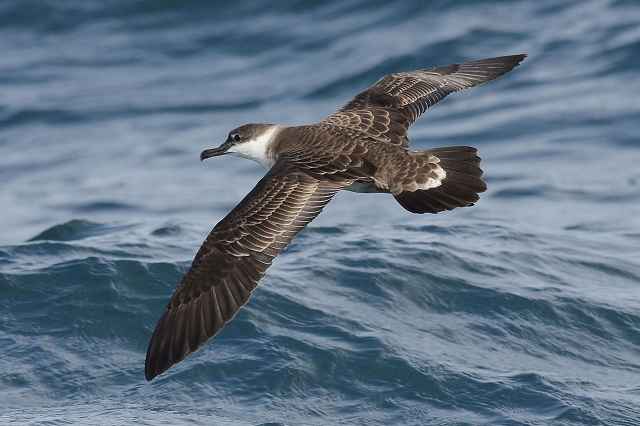 Only seven Basking Sharks were seen off Gwennap Head between 16th August and 15th October, with the 2011 total of 13 being the lowest of the five-year survey period. However, cetacean numbers remained normal with peak totals of up to 22 Harbour Porpoise on 8th October and 100+ Common Dolphins on 24th September. Sightings of one or two Minke Whales were made on 14 dates and a total of nine Ocean Sunfish were recorded. Risso's Dolphins were seen occasionally, with a peak of six on 17th August and 30th August, while Bottlenose Dolphins sightings included peaks of ten on 2nd and 22nd September. Grey Seals peaked at 15 on 29th September.

Unusual gulls, a raptor influx and other notable migrants

An intriguing large gull, in third-winter plumage, was photographed in Porthgwarra Cove on 27th September during a period of southerly winds. Opinions vary as to its origin, with Yellow-legged Gull, Lesser Black-backed Gull and a hybrid combination all being suggested. A series of photos by Russell Wynn can be viewed below (click to view more pictures). Further comments on the identification are welcomed! 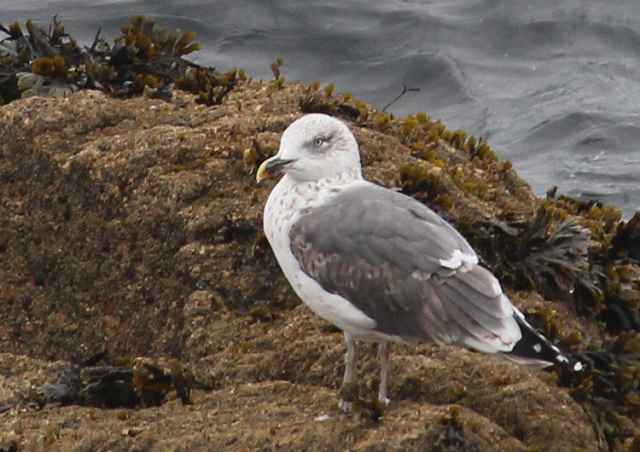 A period of settled weather in late September and early October saw a good run of raptors passing over Gwennap Head, including Osprey (flying south on 28th September), Hen Harrier (adult female flying southeast on 2nd October), Marsh Harrier (four or five different birds flying south from 30th September to 4th October), Merlin (peak of four on 15th Oct), Hobby (three singles from 28th September to 12th October), Kestrel (nine migrants over the sea from 28th September to 6th October) and Sparrowhawk (peak of five overhead on 3rd October). However, the highlight came on the very last day of the survey: a Black Kite seen by SeaWatch SW observers in Porthgwarra Valley on 10th–11th September was joined by two others on 15th September and this trio were then regularly reported further inland for the next month or so. They waited until 15th October to fly directly over Marcus Ward and Alice Jones at Gwennap Head on their way to the Isles of Scilly, where they appeared the following day.

Update on sightings from SeaWatch SW sister sites and partners

In addition to the intensive survey work at Gwennap Head, our partners at Marinelife have continued to undertake small-boat surveys off the southwest UK; full details of their recent offshore sightings are at http://marinelife-charm3.blogspot.com. Notable species recorded in the period 16th August to 15th October included Common and Risso's Dolphins, Harbour Porpoises, Great and Sooty Shearwaters, Grey Phalarope, Pomarine Skuas, Sabine's Gulls and Black Terns. A satellite-tagged Great Skua from Shetland or Orkney was photographed on 12th October. The Marinelife website also includes sightings from the Berry Head and Start Point sister sites in Devon, where the most notable record was an impressive 53 Pomarine Skuas on the early date of 16th August.

As originally planned, this will be the final year of effort-based monitoring at Gwennap Head in southwest Cornwall and by the end of 2011 we will have collected almost 5,000 hours of observations from this strategic watchpoint! Regional context for the data are provided by several thousand hours of observations from our sister sites at Berry Head, Pendeen, Trevose Head, Strumble Head and Whitburn. The SeaWatch SW dataset is increasingly being recognised as a unique resource by the science and conservation community, and a team of postgraduate students at The National Oceanography Centre in Southampton are currently assisting with data analysis and interpretation. The aim is rapidly to generate a number of scientific publications and reports that can be used for conservation purposes in the region. SeaWatch SW will continue to undertake fieldwork in southwest UK in 2012 and beyond, but this will be in a more targeted fashion in order to tackle some of the scientific questions thrown up by the existing survey data.

One of the main aims of SeaWatch SW has been to provide a focal point for land-based recording of the Critically Endangered Balearic Shearwater in UK and Irish waters. Our partners at Marinelife are also leading intensive boat-based recording of this species in the English Channel. Data collected between 2007 and 2010 are feeding into ongoing conservation efforts; for example, SeaWatch SW have recently provided input to the updated Balearic Shearwater Species Action Plan and have submitted a report on the species' status in UK waters to JNCC. We are grateful to all observers who have provided us with records, and are now in a position to generate a research paper based on data collected in the last four years. We will therefore not be collating UK and Irish records from 1st January 2011 onwards, but urge all observers to submit their records to BirdGuides so they can be extracted and used in the future. A summary of all 2010 Balearic Shearwater sightings will be included in the 2010 SeaWatch SW Annual Report, and the key results of the research paper will be available on the SeaWatch SW website once published.

The SeaWatch SW Annual Report 2009 is available online. This 118-page report — illustrated throughout with colour images — includes a summary of all Balearic Shearwater records from the UK and Ireland during the year. The report also contains all the data from the SeaWatch SW survey that took place between 15th July and 15th October 2009, with intensive effort-based observations at Gwennap Head, Porthgwarra, supported by sister sites at Berry Head, Pendeen, Trevose Head, Strumble Head and Whitburn. Finally, a summary of boat-based observations in the western English Channel has again provided by our partners at Marinelife. A shorter version containing a summary of key results is also available. The 2010 report is currently in production and will be available online in the next few weeks.