One of the main aims of Seawatch SW is to provide a central point for Balearic Shearwater recording in UK and Irish waters; this will allow us to put project results into a national context. 2007–08 results are already feeding into ongoing conservation efforts led by RSPB and JNCC at both a national and international level. We are grateful to all observers who have provided us with records, and urge anyone who sees a Balearic Shearwater in the UK and Ireland in 2008 to contact us with details of the sighting (via the Contact Us page of the project website), and/or submit their record to BirdGuides. We have already compiled about 1000 records up to the end of November, compared to about 800 records up to this point in 2007. 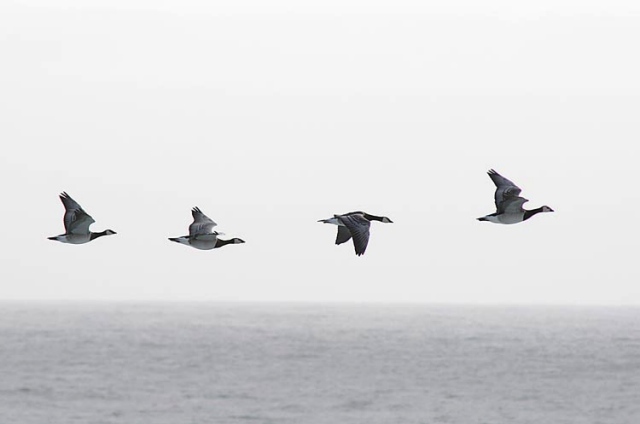 Southwest is best for Balearic Shearwaters this autumn

The overall distribution of Balearic Shearwater records in September was similar to that in August, but lower numbers were seen. All of the significant counts came from the southwest of the UK, with peaks of 66 off Portland Bill (Dorset) on 1st September, 47 off Pendeen (Cornwall) on 6th and 83 off Berry Head (Devon) on 18th–19th. No more than ten were reported away from the southwest, although there was a good scatter of records along southern North Sea coasts and bordering the Irish Sea. The distribution of records rapidly contracted in early October, with very few sightings made north of a line between Pembrokeshire and Dorset. However, numbers were boosted by an exceptional passage of 115 off the SeaWatch SW watchpoint at Gwennap Head, Porthgwarra (Cornwall) on 6th October. This was the largest movement of the year and is a relatively late date for such a large passage. After a further small flurry on 7th, numbers dwindled and no counts above 20 were made in the remainder of the month. Further details and distribution maps can be found on the Results page of the project website.

The SeaWatch SW survey at the Gwennap Head watchpoint (near Land's End in Cornwall) finished on 15th October. Daily updates are available on the Results page of the project website, and new images are on the Gallery. Our volunteer observer team, comprising experienced Seabird Observers and supporting Marine Wildlife Observers, did a fantastic job recording a wide variety of species for 93 consecutive days! We now have almost 2000 hours of data from Gwennap Head to analyse from 2007–08, with supporting data totalling many hundreds of hours coming in from our sister sites at Berry Head (Devon), Trevose Head (Cornwall) and Strumble Head (Pembrokeshire). Don't worry if you missed out this year, we plan to run the survey again from 15th July to 15th October next year. A call for observers will be announced in early 2009, following completion of the SeaWatch SW 2008 Annual Report.

Small numbers of Basking Sharks lingered off Gwennap Head during October, with at least five on 7th October and the last being seen on 12th October. This late departure from coastal surface waters contrasts with 2007, when only one was seen during October. For the second year running the overall pattern of Basking Shark sightings was atypical, with very few seen during July and a late peak in September. This is probably due to poor mid-summer weather preventing formation of plankton concentrations in surface waters. This story was featured on local media, including ITV news, BBC Radio and several websites.

An excellent total of 43 Bottlenose Dolphins was recorded from the Gwennap Head watchpoint on 12th October, including a large pod of at least 34 animals. Bottlenose Dolphins are under threat in southwest waters, largely due to bycatch in fishing nets, so it was encouraging to note several calves on this date. However, the darker side of Bottlenose Dolphin behaviour also became evident around this time. A juvenile Common Dolphin washed up in a nearby cove was reported to have Bottlenose Dolphin teeth marks on its body, while the large numbers of Harbour Porpoises (at least 10) regularly seen off Gwennap Head in October disappeared for several days, presumably to avoid running into the bullying dolphins! Other cetacean sightings during October included two Minke Whales and 25+ Common Dolphins, while Grey Seals peaked at 17th on 3rd October. Further details on the Results page of the project website.

A mouth-watering selection of rare land birds was recorded in southwest Cornwall during October, but the area around Gwennap Head and Porthgwarra remained surprisingly quiet. Interesting sightings made by SeaWatch SW observers included Short-eared Owl, Water Rail, Whimbrel and a couple of Firecrests. However, of particular note was a passage of small falcons, with several migrant Merlins and Kestrels seen heading south out to sea; one of the Merlins was even seen pursuing a butterfly overhead! It has been a poor year for migrant butterflies and moths, and just a scatter of Painted Ladies, Rush Veneers and Rusty-dot Pearls were seen in October. Further details are on the Results page of the project website.

During autumn 2008, observers based in southern England witnessed three separate incidents of falcons attacking shearwaters. These included an escaped Lanner/Saker-type falcon attacking two Balearic Shearwaters over the sea off Gwennap Head (Cornwall), a Peregrine Falcon attacking a Sooty Shearwater off Trevose Head (Cornwall), and a Peregrine Falcon harrying a group of three Balearic Shearwaters off Hengistbury Head (Dorset). In all cases the attacks were unsuccessful and the shearwaters continued unharmed. However, on the breeding grounds, we have recently received photos showing Peregrine Falcons successfully taking Balearic Shearwaters at the entrance to nesting caves. Previous studies have shown that Peregrine Falcons in particular have a track record of attacking migratory seabirds, especially Manx Shearwaters, European and Leach's Storm-petrels, and various wildfowl and waders. However, there appear to be no published data describing attacks on Balearic and Sooty Shearwaters. We therefore plan to produce a short article about this behaviour. To assist this process, we would be grateful for any examples of falcons attacking Balearic, Sooty, Cory's or Great Shearwaters (or any other 'large' migratory seabirds). All contributions will be acknowledged in the published article. Please send any correspondence to the SeaWatch SW co-ordinator via the Contact Us page of the project website.

In August 2008, Russell Wynn (SeaWatch SW co-ordinator) and Ken Shaw participated in a research expedition to the deep northeast Atlantic Ocean. They made a number of interesting marine wildlife observations (see the JC027 results page of the project website for daily sightings), and several articles are currently in production and scheduled for publication in 2009. One of the highlights was a sighting of a Swinhoe's Storm-petrel about 100 miles off Lisbon (Portugal). A full description of this exceptionally rare seabird can be downloaded from the Latest News page of the project website.