A day of public relations sees Tim and me start with a presentation to the Conservation Department of the Balearic Islands Government (ably translated by Miguel into Spanish as we go). I show them how volunteer SeaWatch SW observers have provided valuable data on Balearic Shearwaters in UK and Irish waters, while Tim discusses the use of tracking technology and how we are applying it in this project. We then give a similar talk to the Balearic Islands Ornithological Group (GOB) in the evening, where we are subjected to lots of questions about identification of Balearic, Yelkouan and 'Menorcan' Shearwaters in Atlantic waters, which continue over beers and dinner! 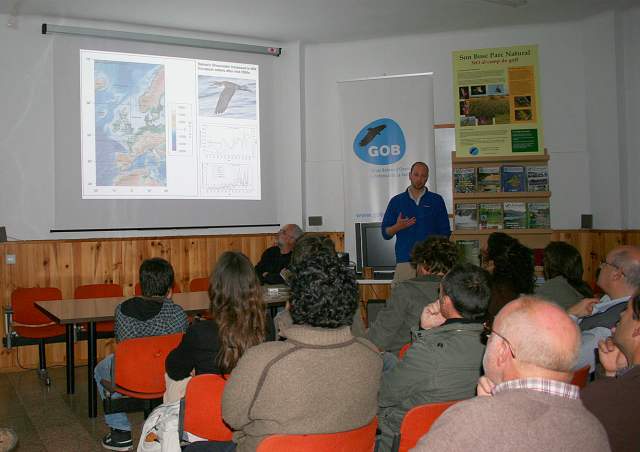 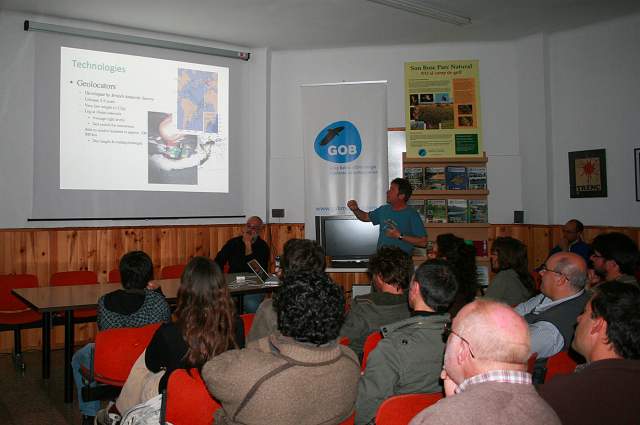 We crawl out of bed and head to the airport for a short flight to Menorca, with the aim of tagging birds at the colony of La Mola de Mao. Upon arrival at Menorca airport we all pile in to our hire car, a big white Mercedes people carrier with blacked-out windows! The site at La Mola is within the grounds of a huge fortress, complete with deserted barracks, gun stations and even the rather sombre sight of an execution compound where prisoners were lined up and shot (the back wall of the compound is peppered with bullets). 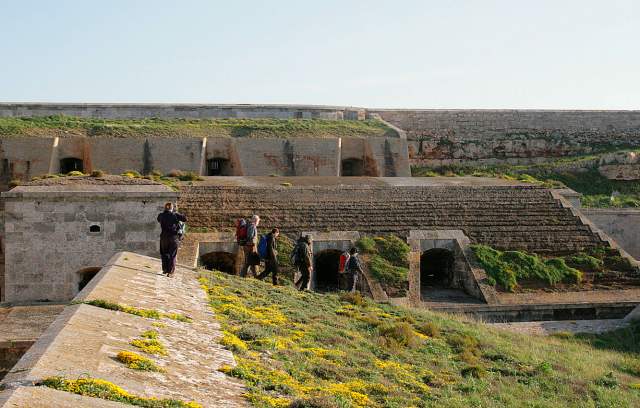 The team walking through the fortress at La Mola. These shearwaters nest in some spectacular places! (Photo: Russell Wynn)

A pair of Stone Curlews is flushed from one of the narrow passages as we make our way to the cliff edge, and a Blue Rock Thrush sings mournfully from a nearby rampart. After a short scramble across a boulder field we reach the section of cliff that is home to the largest known colony of Menorcan Shearwaters. These birds are scattered across a series of caves and burrows in an area with no public access, and it is clear that working in this terrain is going to be much more challenging than in the relative comfort of Sa Cella. 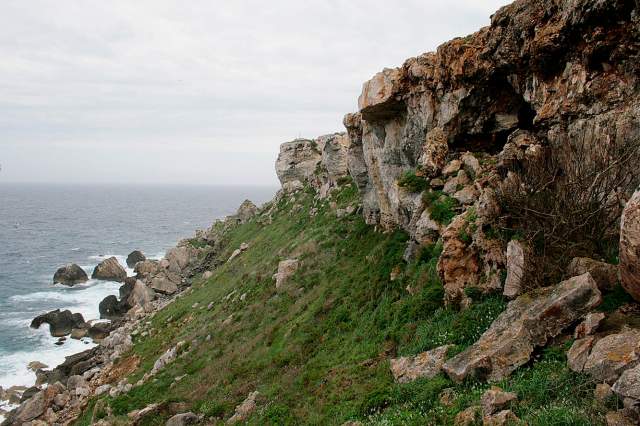 The cliff at La Mola, which holds an important colony of Menorcan Shearwaters. Most birds are in caves and small holes at the base of the upper cliff. (Photo: Russell Wynn)

Miguel and Ana had found three (relatively) accessible pairs in a small cave a few days earlier, and Ana is soon wriggling through a small passageway to see if she can capture any of these birds. She soon returns, covered in dust and grime, but clutching a Menorcan Shearwater! Unfortunately, the other two incubating birds retreated into a crack at the back of the cave and defied capture. 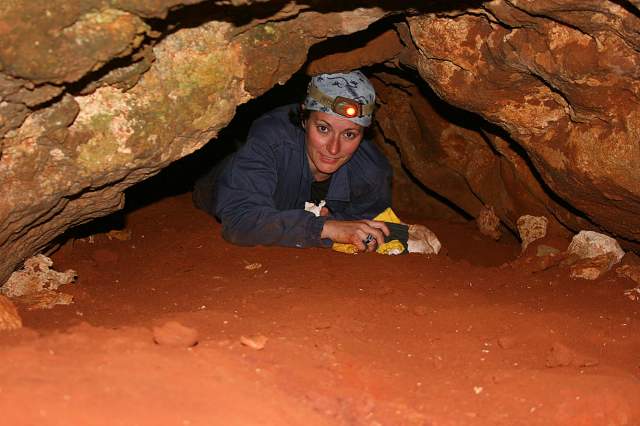 As the first bird is pulled out of its restraining sock I can see immediately that it is very different to any of the Balearic Shearwaters that we had handled in previous days. It is clean 'Persil' white underneath, including beneath the wings. The weight is 550g, which is large for a Menorcan Shearwater, and comparable to many of the Balearic Shearwaters we had captured. However, this bird seems smaller and slimmer overall than Balearic Shearwater. To my eye it looks like a typical Yelkouan Shearwater! It is interesting to see that the nails are much longer than those of birds breeding in Sa Cella, presumably because the nesting cave at La Mola is floored by red clay whereas that at Sa Cella is hard limestone. 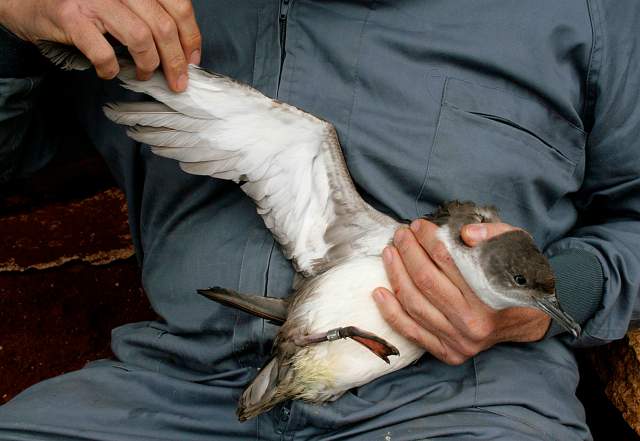 Menorcan Shearwater at La Mola. Note the very clean white underparts and underwing (although this bird is slightly soiled around the vent area). (Photo: Russell Wynn)

We then search further along the cliff in search of more birds, which involves elements of scrambling, climbing, caving and sticking your arm blindly into dark holes! An early Scopoli's Shearwater (not yet incubating) is found, admired and carefully replaced. Then, in an unremarkable burrow next to a lump of limestone, I find another incubating Menorcan Shearwater. 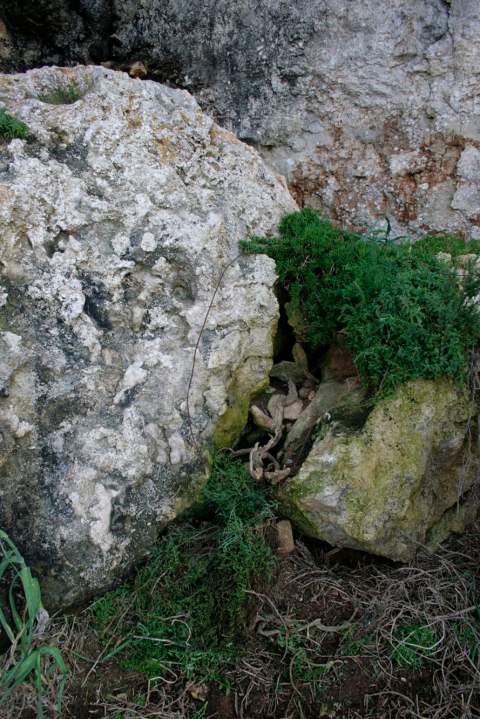 Miguel carefully extracts the bird and we get to see our second specimen. This bird is really small, weighing just 410g, which is significantly smaller than any of the Balearic Shearwaters we had handled. In daylight the upperparts have a distinctly greyish tone, quite different from Manx and Balearic Shearwater. 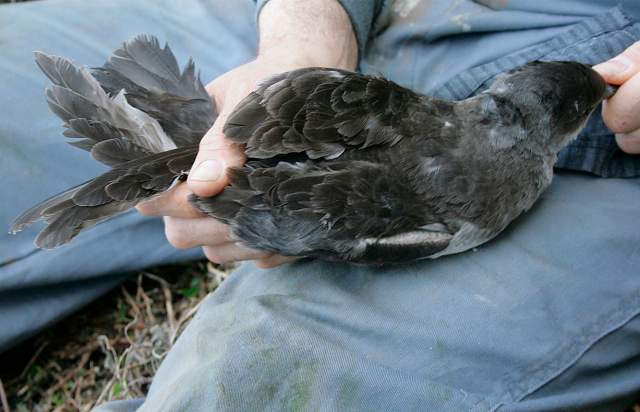 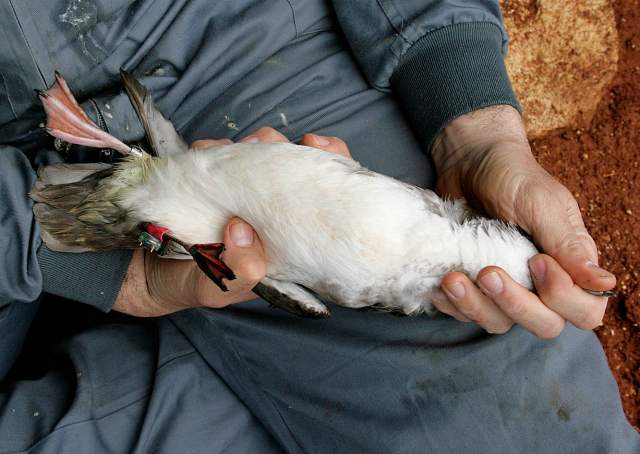 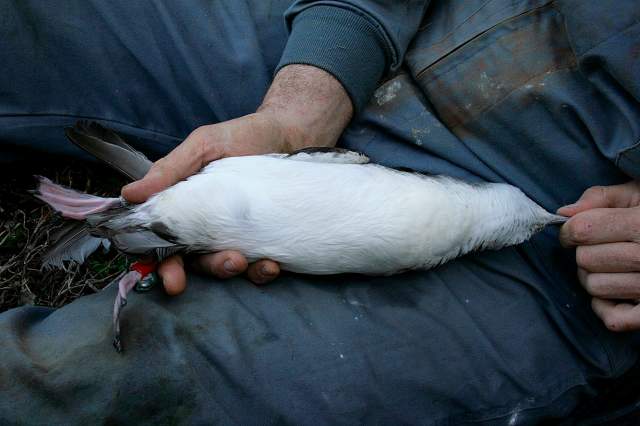 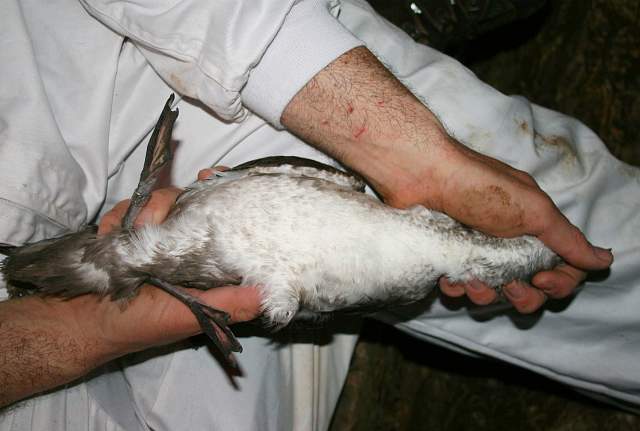 Photos showing the underparts of the two Menorcan Shearwaters from La Mola (upper two images), compared to a relatively pale Balearic Shearwater from the cave at Sa Cella on Mallorca. (Photo: Russell Wynn)

Further searching produces a couple of near misses, with birds visible in burrows but not within arms' length. However, we do find a collection of half-eaten shearwater corpses and various skulls and jawbones; a sobering reminder that these birds are suffering unsustainable levels of predation from introduced mammals and even the local Peregrine (Miguel and I currently have a paper in press with British Birds describing this behaviour). Miguel then recovers the data from the infra-red camera at the mouth of the main cave colony, which shows that previous nights had seen visits from Yellow-legged Gull, Black Rat and Pine Marten (an unwanted first for the locality). 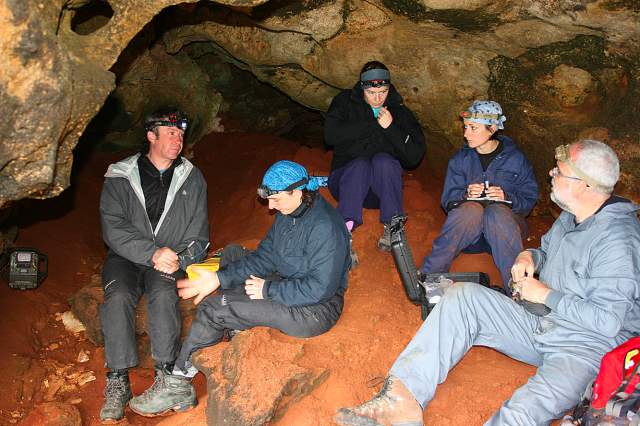 The team working in the cave at la Mola. Note the infra-red camera in the far left of the image, which detects animals moving around the cave entrance. (Photo: Russell Wynn)

On the way home the mood is sombre. The problems being faced by the small population of shearwaters on Menorca are no different to those being faced by shearwaters, petrels and albatrosses across the globe. Miguel and I discuss various options to try and reduce predation levels, such as anti-predator fences and artificial nesting burrows, and make plans for future action. 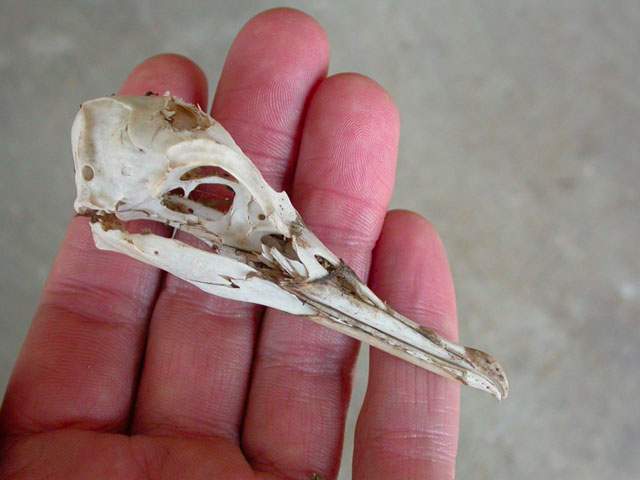 Menorcan Shearwater skull recovered from La Mola. This bird was probably the unfortunate victim of an introduced Feral Cat, and serves as a grim reminder of the perils facing these vulnerable birds on their breeding grounds. (Photo: Russell Wynn) 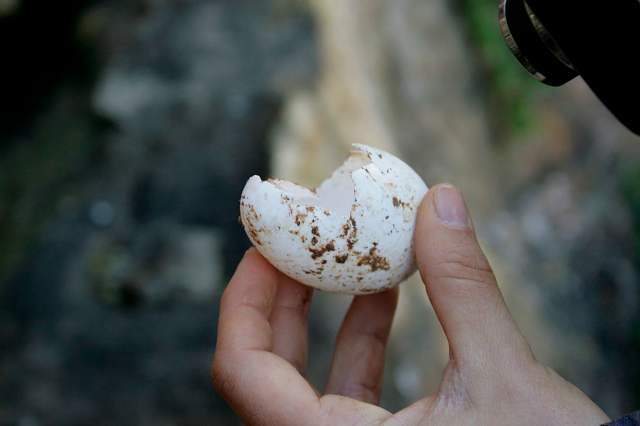 A lovely sunny day sees us collect the RIB and head out to Sa Cella from Port d'Andratx. The resident Osprey greets us at the cave entrance and watches over us as we enter. The four GPS-tagged birds are checked first. All are now out at sea with the partners incubating normally. We also catch the remaining three 'changeover' birds and attach geolocators, making it 17 complete male– female pairs that are carrying these devices at Sa Cella (34 birds in total). We've reached our target! 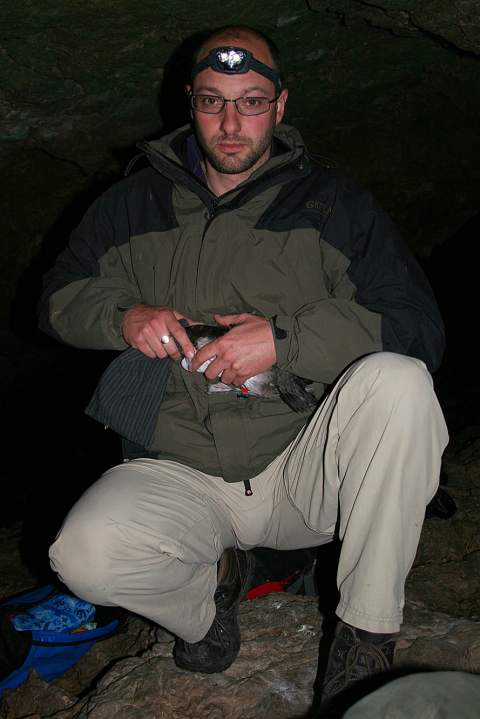 We return to port, where Miguel picks up an injured Yellow-legged Gull with a badly broken wing. Unfortunately it is beyond repair, and with the bird already losing weight Miguel decides to put it out of its misery. However, our spirits are raised in the evening when we are served a large plate of roast suckling pig and some prime Rioja; a great end to the trip!

An early start sees Alice and I reluctantly saying our farewells as we head for the airport and our return flight to London. Tim and Lou are catching a later flight and have time to accompany Miguel and Ana to Sa Cella before they leave. In the evening I get an email from Miguel to say that they have successfully recovered one GPS device, and that the bird was in good condition and had put on weight. Needless to say, I sleep very well and dream about caves, cliffs and shearwaters!

Miguel and Ana regularly visited the cave in subsequent days and recovered the other three birds carrying GPS devices. One had somehow shed the device (but with no obvious feather loss), while the other two devices were successfully recovered. Importantly, all four birds carrying GPS devices had put on weight during their foraging trips, and data from the three recovered devices indicated that they were using known foraging hotspots off northeast Mallorca or southeast Spain. This final bit of information confirmed that the devices were working well and the birds were behaving normally, allowing us to relax fully for the first time since the trip started! So in summary there are now 34 Balearic Shearwaters (17 male–female pairs) from Sa Cella flying around with geolocators attached, together with two Menorcan Shearwaters from the colony at La Mola. The back-mounted GPS tags worked well, and this method will therefore be applied on a series of birds at Sa Cella in 2011. 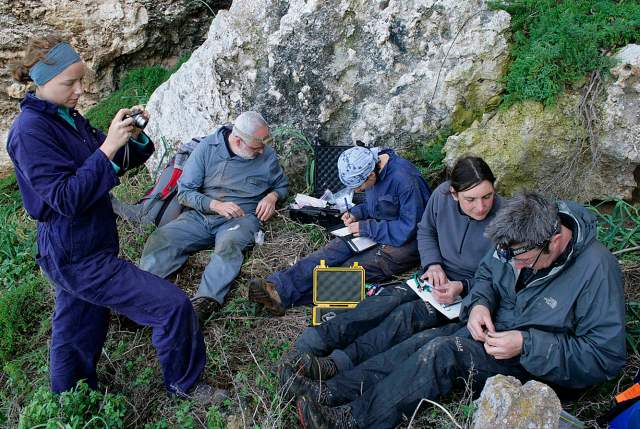 The project has certainly made me realise that working on a Critically Endangered species is both a privilege and a burden. The results can make a significant difference to the species' conservation, but mistakes can be disastrous. There were certainly some tense moments, particularly when waiting for the birds carrying GPS devices to return to the nest. However, we were fortunate to have Tim, Miguel and Ana in our team, and their experience and professionalism when handling the birds ensured that everything went smoothly, with minimum impact to the birds and their environment. We are now making plans to generate external funding to support predator control work at the Menorcan Shearwater colony at La Mola. We also hope to invite SeaWatch SW and GOB volunteer observers to a field camp in 2012, to try and discover new Balearic Shearwater breeding sites along the north coast of Mallorca. And of course we're all waiting eagerly for spring 2011 to arrive, so we can return to the colonies and extract the geolocator data. For the first time we will find out exactly what our shearwaters have been doing during their time wandering the ocean! 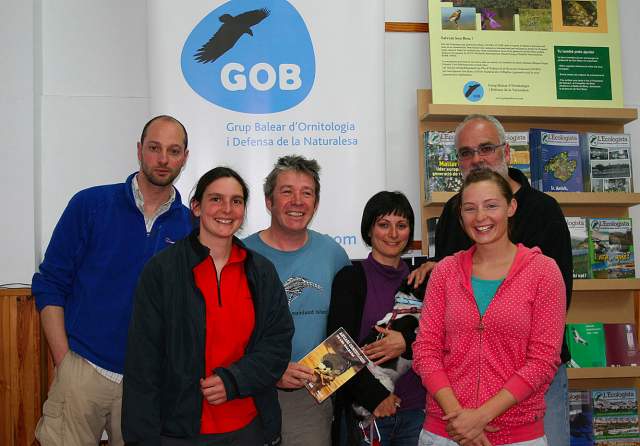 I would firstly like to thank Miguel and Ana for their fantastic hospitality throughout the trip; we couldn't have wished for better guides and colleagues. I am also very grateful to Tim for sharing his expertise and unquenchable sense of humour! Alice and Lou did a great job of keeping us 'in check' and ensuring that all the data were carefully recorded and archived. Joan Mayol Serra, who leads the Conservation Department of the Balearic Islands Government, generously provided us with the necessary permits. British Antarctic Survey supplied the geolocators that are so essential to the project. Microsoft Research are financially supporting some aspects of Tim's seabird tracking work, while SeaWatch SW is financially supported by Total Foundation, RSPB, BTO, SAHFOS, RNBWS, Seabird Group, BirdGuides and Marine Information Ltd.