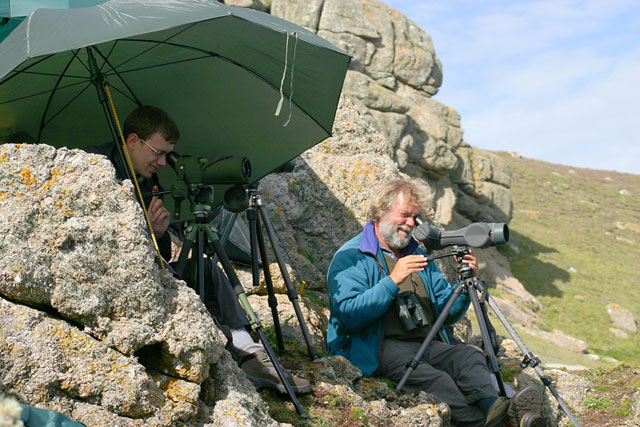 The survey phase of the SeaWatch SW project continued throughout August; this update contains information about the month's highlights, and other news items recently uploaded onto the project website.

SeaWatch SW largely depends upon the efforts of volunteer observers, who will be based at the project watchpoint at Gwennap Head between mid-July and mid-October. The project has generated significant interest and all core observer slots are now full, ensuring continuous 'dawn-to-dusk' coverage by experienced observers for the whole three months! However, if you are interested in helping out at the watchpoint at any time, please contact the project co-ordinator or simply pop in if you are passing (see below).

Finding us at the SeaWatch SW watchpoint

SeaWatch SW observers will be located at the Gwennap Head watchpoint from dawn to dusk every day until October 15th (except between 12 and 2pm). To reach the watchpoint, walk along the coastal path from Porthgwarra cove until you reach the NCI coastguard lookout (5-10 minutes' walk). From there, head south-east for about 100 m towards the cliff edge, and then walk down the cliff path towards a headland with a large blowhole in it. This is Gwennap Head, and the observers will be found halfway down the headland (through a narrow gully) in a sheltered location, which varies depending on weather conditions. The grid ref is

One of the main aims of SeaWatch SW is to provide a central point for Balearic Shearwater recording in UK waters; this will allow us to put project results into a national context. Initial 2007 results are already feeding into ongoing conservation efforts led by Birdlife International. We therefore urge anyone who sees a Balearic Shearwater in the UK in 2007 to contact us with details of the sighting, and/or submit their record to BirdGuides. We have already received 485 records up to the end of August, and are grateful to all observers who have submitted their sightings.

The survey phase of SeaWatch SW, based at Gwennap Head, continued throughout August, with a variety of interesting marine wildlife being recorded by the core shark observers (Steph Hinder, Helen Earwaker, Paul Johnson, Martin Gillingham, Russell Wynn, the SAHFOS girls and Leire Ordorika). Large numbers of Basking Sharks were seen, with local observer John Swann bagging the maximum count of 51 at lunchtime on 17th August (including three breaching). Other peak counts included 350+ Common Dolphins, 21 Bottle-nosed Dolphins, up to 20 Harbour Porpoises, at least one Minke Whale on several dates, and even a distant Fin Whale seen by local observer Jean Lawman on 20th. In contrast, Ocean Sunfish were relatively scarce, with just eight recorded, and no jellyfish were seen. Daily updates and images (including videos of Basking Sharks) can be viewed on the Results and Gallery pages of the project website.

A dominance of northerly winds ensured that rare seabirds were hard to come by for the core seabird observers (Ken Shaw, Kevin Peace, Pete Berry, Russell Wynn, Tom McKinney, Simon Hartill and Kevin Bainbridge). However, the totals included three Great , 19 Cory's and 255 Sooty Shearwaters (including an impressive 160 on 18th), as well as single Sabine's, Mediterranean and Yellow-legged Gulls, a peak of 100 European Storm-petrels, several Pomarine Skuas, and small numbers of Puffins lingering offshore. Land bird migrants included Osprey, Long-eared Owl (in off the sea), Grey Heron, Green Sandpiper and Greenshank. Full details on the Results page of the project website.

Nationally, about 215 Balearic Shearwater reports were received during August, a big increase on July. The peak count was 72 off the Gwennap Head watchpoint on 4th, contributing to a monthly total of 426 birds there (nearly all moving west). Other double-figure counts were restricted to Cornwall, Devon, Dorset and Bridges of Ross (Ireland); however, there was a clear northwards push of birds into the North Sea and Irish Sea. Single individuals even made it as far north as Orkney and the Outer Hebrides! To view the full August report and other 2007 monthly summaries with distribution maps, visit the Results page of the project website.

NEW How many Balearic Shearwaters are out there?

Counts of Balearic Shearwaters passing the Straits of Gibraltar this year have yielded some surprises, as revealed by colleagues in Spain (www.fundacionmigres.org). Partial coverage between 15th May and 17th July produced a westwards flow of birds out of the Mediterranean and into the Atlantic in excess of 12,500 birds! This is greater than the estimated world population of 10,000 birds, and may indicate that 1) some breeding colonies are yet to be discovered, 2) there are more non-breeding birds than has previously been estimated, or 3) that birds are circulating west of Gibraltar and passing back into the Mediterranean further offshore on a feeding loop. More research is clearly required, but these figures may suggest that there are more Balearic Shearwaters in existence than was previously thought, although this will not change their critically endangered status.

Initial results from monitoring of colonies on the Balearic Islands have revealed that 2007 has again been a poor breeding season for Balearic Shearwaters. Miquel McMinn and Ana Rodriguez report low numbers of fledged chicks, even from colonies with no obvious predation. The results this year come against a backdrop of declining breeding productivity in the last decade, meaning the overall outlook for the species is still very uncertain. It also means that plans to colour-dye a number of juvenile birds, to trace their migration pathways and preferred feeding areas, have been put on hold, in order to avoid jeopardising the small number of fledged juveniles.

The 6th report of the RAM project (Iberian Seawatching Network of Seabirds and Marine Mammals) is now available. RAM involves over 100 volunteer observers counting all marine seabirds and cetaceans from Iberian headlands on selected days throughout the year, to provide snapshots of species distribution and abundance. A dedicated page of Balearic Shearwater results reveals that small numbers of birds were still present in Iberian Atlantic waters in February and March, but almost all had returned to the western Mediterranean during April (where breeding birds were present in large numbers throughout the period). This pattern mirrors the SeaWatch SW results for the UK, with small numbers of birds lingering into late winter but no records being received for from mid-March to mid-May. To view the RAM report online, visit: http://www.telefonica.net/web2/redavesmarinas/index.htm.

One of the aims of SeaWatch SW is to observe and record instances of harassment of Basking Sharks off the Gwennap Head watchpoint, and elsewhere in the region. Reckless or deliberate disturbance of Basking Sharks is illegal under Schedule 5 of the Wildlife and Countryside Act, and such behaviour can lead to sharks being injured or forced away from a preferred feeding area. Already the team have observed several instances of boat users recklessly disturbing sharks, and a full dossier has been passed on to the police. Other recent incidents have been highlighted in the local media, and on the BBC News website:

Help the RSPB get the UK Marine Bill into the political front line!

Please help ensure that the UK Marine Bill is part of the Government's legislative agenda for 2007-08 by securing its inclusion in this autumn's Queen's Speech. Data collected during SeaWatch SW and other projects will only reach their full potential if initial Government proposals for Marine Conservation Areas are driven forward. So please log on to the RSPB weblink below and sign their petition: