A skua seen from the Scillonian Pelagic on 9th August 2008 caused debate regarding its specific identity. Some favoured Arctic Skua, while others Long-tailed Skua. This short note attempts to summarise features that help identify the bird. 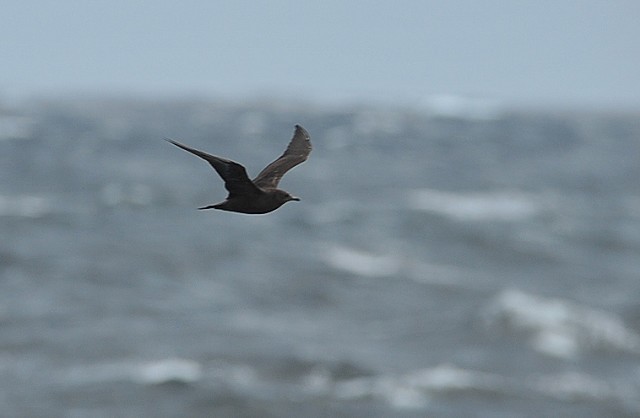 Before attempting to identify a bird specifically, assigning the bird to an age group is helpful. The lack of widespread pale fringing to the flight and body feathers suggests the bird is not a juvenile, although a very dark juvenile skua could appear similar to the bird in question. A juvenile skua on 9th August would appear fresh, unlike the bird in question which shows a worn tail and remiges. It would also be unusual for a juvenile to be this far south on this date. The pale basal two thirds and dark distal third of the bill, hint of barring on underwing and upperwing coverts and otherwise adult-like appearance suggest a second-summer type skua. The extensive dark appearance of the bird suggests a dark morph. Ageing immature Arctic Skuas with certainty is regarded as being impossible: 'Separating second years from third years requires care, and these are better identified as 'second/third year types' in the field' (Olsen 1997). The same cautious approach is also required for all other skuas. If bird is a second summer, more pale fringing might have been expected, but it is possible it has began replacing its barred feathers with plainer more adult-like feathers. More adult-like central tail feathers might also have been expected, but due to the tail feathers potentially being upwards of six months old, abrasion of the feathers appears to have taken its toll. 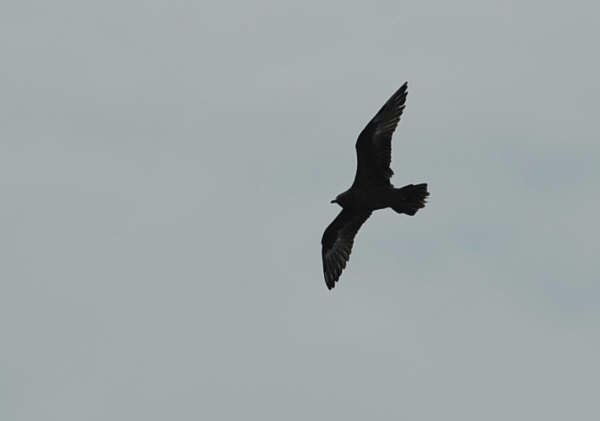 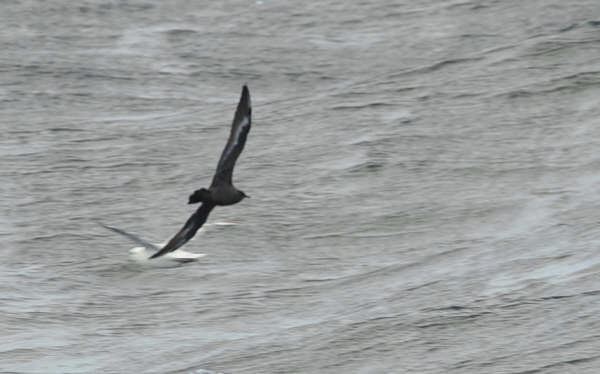 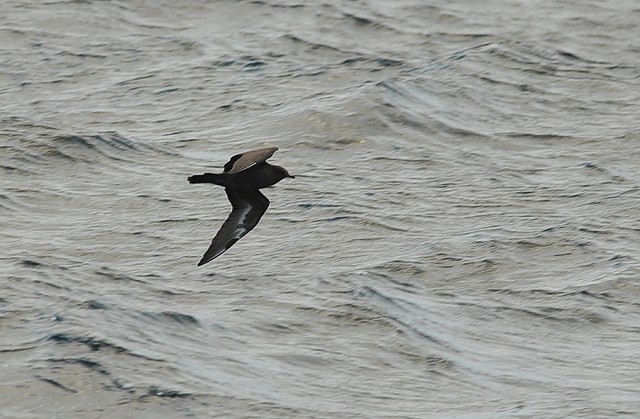 The bird followed in the wake of the Scillonian III boat for a considerable period of the pelagic. Several species often parasitized by skuas were present around the boat, but the bird instead exclusively employed a 'dip-feeding' strategy, its target being fish scraps which were thrown overboard to attract seabirds. This style of feeding is more commonly associated with Long-tailed Skua, which in addition to the bird's plumage and shape, resulted in Long-tailed Skua being an identity favoured by some. It is perhaps unwise to use the bird's response to an artificial food source as an identification character.

Except for a suggestion of diffuse pale fringing to the upperwing and underwing coverts, pale primary/secondary bases and pale greater underwing covert tips, the bird appears uniformly dark. A juvenile Long-tailed Skua could appear as dark as bird in question, but this age can be ruled out for the aforementioned reasons. If the bird is a Long-tailed Skua it must therefore be in one of the immature plumages (regarded here as second-summer, third-summer or fourth-summer). Even the darkest immature Long-tailed Skuas develop a suggestion of a paler hindneck, as well as some pale feathering on the belly, and many also show barring on the rump/underwing plus a paler vent. The tail projection in immature Long-tailed Skuas is often very long, as in adults, and the bird lacks virtually any tail projection. This indicates it is not a Long-tailed Skua, but does not completely rule out that species. For example, a Long-tailed Skua that has commenced tail moult, combined with a heavily abraded tail, might appear similar. Despite this, surely the bird would not have shown such an extensively worn tail if it was initially as long as that shown by Long-tailed Skua? Others characters at odds with Long-tailed Skua include the fairly extensive white primary bases and a high percentage of pale on the bill. The shape and size of the bird were difficult to assess both in the field and in photographs. In the field, the bird was often immediately alongside European Storm-petrels and therefore comparing size and shape may have been inaccurate or misleading. In photographs, there are no species pictured alongside, and again assessing size in particular could be inaccurate. Despite these difficulties, it is evident in the field and in the photos that the bird appears too small, and too frail, to be a Pomarine Skua. In terms of plumage, however, a dark-type second-summer Pomarine Skua could potentially appear very similar, but might be expected to show a more extensive underwing flash.

In summary, the bird can be identified as an immature Arctic Skua with a degree of confidence due to the several features visible in the plumage. The individual highlights how a bird in atypical viewing conditions can create an impression at variance with what we would expect. Many observers will be familiar with viewing skuas passing mainland seawatching locations, but far fewer will have good experience of skuas on pelagic trips.

Thanks to Tim Cleeves and Mark Newsome who provided comments regarding the identification of the bird, and Steve Rogers who provided photographs.