Six United Kingdom primary schools have named some of this year's batch of BTO-tagged Common Cuckoos after winning a sponsored competition.

England has lost almost three-quarters of its breeding cuckoos during the last 25 years and the BTO is hoping to find out why. This is the fifth summer that scientists at the BTO have fitted state of the art satellite tags to British Common Cuckoos and it is hoped that the newly tagged and named birds will help to provide information on the routes that cuckoos from the northwest take to Congo.

The schools and their cuckoos are:

All have won the chance of naming a Common Cuckoo fitted with a solar-powered satellite tag by the British Trust for Ornithology (BTO), and will now be able to follow their cuckoos as they make their way from Britain to spend the winter in the heart of the Congo rain forest in West Africa. 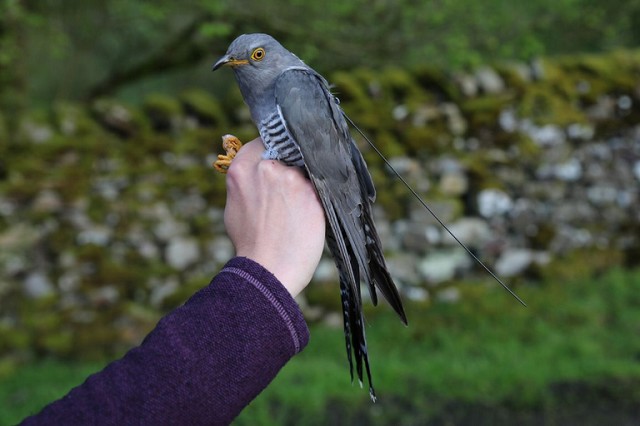 Cookie the Common Cuckoo may already have become lost in action as its transmitter has not been heard from since it arrived in northern Italy. (Photo: BTO)

The competition was run by EDF Energy's award-winning education programme, the Pod, which recently launched a new partnership with the BTO to help encourage more young people to study science and sustainability.

Dr Chris Hewson, lead scientist on the project, said: "During the last four years we have learned a lot about our cuckoos when they leave the UK. However, we are just beginning to understand that where they live and the routes they take to get to Africa might make all the difference to their future survival. So, these new birds could provide us with vital information in this respect.

"It is great to have schoolchildren children engaged with the project — after all, it could be theirs and their children's cuckoos that they are helping to save."

Robyn Thorn, EDF Energy's Education Programme Manager, said: "We want more schools to sign up to the Pod and help us to inspire the next generation of scientists. It's critical that we encourage more young people to study science and sustainability if we are to tackle climate change."

The BTO fear that the cuckoo named Cookie might not have survived its migration south as it has failed to send any signals for the last few weeks. Migration is arduous and hazardous, and many birds don't make it to their wintering areas, it seems Cookie may be one of these.

Anyone can follow the satellite tagged Cuckoos at www.bto.org/cuckoos.