Not feeling Christmassy enough? A Robin with a Father Christmas 'beard' should do the job! 'Santa Robin', which has been seen by Ian Wilson in Derbyshire, has a condition known as leucism. This inherited disorder causes parts of a bird's plumage to lack their normal colour and to appear white, often affecting areas around the face and on the wings.

It's not just Robins that are being spotted through the BTO Abnormal Plumage Survey. In total, over 1,500 birds across more than 35 species — ranging from Blue Tit and Chaffinch to Buzzard and Coot — have already been recorded in the nation's gardens. Blackbirds with unusual white feathers have been logged most often, with members of the crow family, including Jackdaw, Carrion Crow and Rook, also featuring highly. Some of the more extraordinary sights have been black-headed Blue Tits, red-tinted House Sparrows and a Goldfinch with an orange instead of a red face. On some occasions, people have been so puzzled that they have had to write 'species unknown'. There is much more to find out about birds with abnormal-coloured plumage and the BTO wants householders to share what they see. 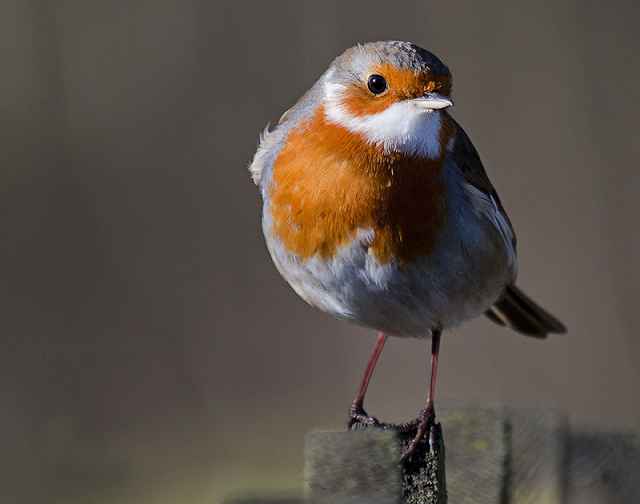 Tim Harrison, BTO Abnormal Plumage Survey coordinator, commented: "The red breast of a Robin doesn't just make it look pretty — it plays an important role in its life. Unlike most other garden birds, Robins defend their territories throughout the year and display using their breast to warn rivals to 'keep out'. It is possible that a white 'beard' could affect this communication."

Hein van Grouw, Curator at the Natural History Museum, added: "The most common form of leucism in birds only affects the body parts farthest away from the pigment cell's origin in the embryonic spinal cord — i.e. the face, wingtips, feet and belly. This Robin shows a moderate form of the condition and so only the chin and a few outer flight feathers are affected."

Tim concluded: "With the help of the public, the BTO Abnormal Plumage Survey is charting odd-looking garden birds up and down the country, with records extending from Shetland to the Scilly Isles. Please keep your eyes peeled and let the BTO know what strange birds you see."

To take part in the Abnormal Plumage Survey, visit www.bto.org/gbw or telephone 01842 750050 for a paper recording form.