New research, published in the Journal of Avian Biology, has found that Ruddy Shelduck routinely climb to altitudes of almost 7 km as they traverse the Himalayas during migration.

Breeding north of the Himalayas, the species spends the winter at sea level to the south of the Tibetan Plateau, meaning it needs to cross the mountain range in both spring and autumn.

Scientists from the University of Exeter used satellite tracking to monitor the passage of 15 Ruddy Shelduck, finding that the birds climbed to altitudes as high as 6,800 m (22,000 feet) as they crossed the Himalayas. However, the ducks also tended to fly through valleys within the mountain range, avoiding particularly massive peaks – such as Mount Everest. As oxygen levels are halved at an altitude of 4,000 m, the crossing presents a huge challenge for the birds, and these findings make Ruddy Shelduck the highest-flying duck species on Earth.

Lead researcher Nicole Parr explained: “This is the first evidence of extreme high-altitude flight in a duck. This species has probably evolved a range of adaptations to be able to cope with flying so high, where oxygen levels are half those at sea level. We don’t yet know the nature of these adaptations.

“Our research also shows that Ruddy Shelduck has a faster climb rate than Bar-headed Goose – the only waterfowl known to fly even higher.”

Dr Lucy Hawkes, the supervisor of the work at the University of Exeter, had previously tracked Bar-headed Geese to a 7,290-m altitude near Everest in 2014. The species was long thought to be the world’s highest-flying bird based on flapping flight (some birds soar higher on thermals), but this new research suggests that the geese may not be the only species migrating at such altitudes.

However, more research is needed to find out whether Ruddy Shelduck ever reaches similar heights. The tracked birds regularly climbed to above 5,000 m and sometimes went much higher, and the researchers suggest that Ruddy Shelduck wintering further west in India may fly at even greater altitudes, given the elevated terrain that lies to the north of India. 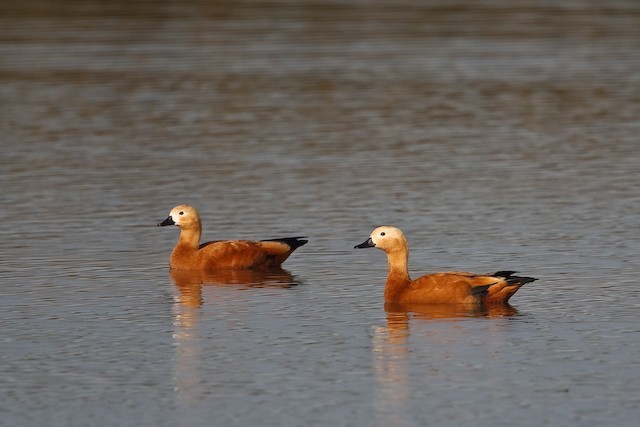 The study found that Ruddy Shelducks migrated over the Himalayas at heights of almost 7 km (Ian Scott).