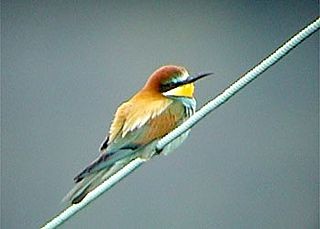 A pair of Bee-eaters, one of Europe's most colourful birds, have successfully hatched chicks in this country for the first time in nearly fifty years, the RSPB and Durham Wildlife Trust (DWT) announced today.

Bee-eaters, with their kaleidoscopic plumage, are one of the most beautiful birds in Europe and the news of successful nesting could draw thousands of visitors to the Durham village of Bishop Middleham, near Sedgefield.

A new public viewpoint overlooking the birds' favourite feeding area has been opened today by the Durham Wildlife Trust and the RSPB so that visitors can get the best possible views of the exotic looking birds.

The Bee-eaters, which arrived in County Durham following southerly winds at the start of June, have exchanged their normal nesting area in southern Europe for a disused quarry in northeast England. The birds, which lay their eggs in burrows, have chosen to nest at the Bishop Middleham Quarry nature reserve and have been protected by a round-the-clock watch by RSPB staff and Wildlife Trust volunteers.

The rarity of the birds has made the Bee-eaters a potential target for egg thieves and a military-style operation with 24-hour surveillance will continue until the birds leave.

Bee-eaters were last recorded breeding in the UK in 1955, when two pairs nesting in a sand-pit in Sussex raised seven young. Before that, the only other known nesting attempt was in Scotland in 1920. Normally they nest no closer than Paris.

The behaviour of the adult birds yesterday has alerted observers that the eggs have hatched, with the adult birds now delivering food to the chicks. Bee-eaters lay their eggs at the end of a burrow, which can be up to 3 metres long, and dug into vertical cliff-faces. The chicks will not leave their underground nest site until next month, so the number of chicks hatched is still not known and the first sighting is eagerly expected.

Richard Wood, Chief Executive of Durham Wildlife Trust, said: "Bishop Middleham Quarry is particularly important for its flora, including several species of orchid, but we are, of course, absolutely delighted that the Bee-eaters have chosen to breed there. Their success shows just how good a habitat this is and how well it is managed."

Mark Thomas, of the RSPB species protection unit, said: "Bee-eaters are stunning birds and to have a pair nesting again in the UK after nearly half a century is an amazing event. They have brought a brilliant splash of unexpected continental colour to northern England this year."

Kevin Spindloe, Bee-eater Warden at Bishop Middleham Quarry, added: "Now that the eggs have hatched, we expect that many people, and not just keen birdwatchers, will want to come and be part of this event. A larger, third viewing area has now been set aside for visitors, with telescopes available for visitors to use. We hope that over the coming weeks many visitors will enjoy watching these beautiful birds.

"The Durham Wildlife Trust and the RSPB wish to acknowledge the invaluable support provided by local people, volunteers and the police, who have helped watch over the nesting location to prevent disturbance to the Bee-eaters."

The viewpoint has been set up on farmland near the village of Bishop Middleham, which is located north-west of Sedgefield, County Durham. Access from the A1 and A177 and follow the signs to the Bee-eaters. A local farmer has kindly provided the viewing area and there is a small charge for car parking on site. Visitors are asked not to enter any private property or areas that have been closed to the public.

Bird News Extra subscribers can view all reports and photos of these birds at: