An unusual warbler discovered on a small Indonesian island as recently as 2004 has just been described as a new species of leaf warbler. Named Rote Leaf Warbler after the island in the Lesser Sundas where it was found, Phylloscopus rotiensis differs from all other species in the genus by its relatively long, tailorbird-like bill and distinctive coloration.

Although many islands in the region harbour breeding populations of leaf warblers, Rote Island – which lies south-west of Timor – was historically not known to have any. However, while birding on the Tapuafu peninsula in December 2004, Dr Colin Trainor from Australia's Charles Darwin University observed several warblers which were "frequent in woodlands and tropical dry forest" and uttered a "breezy, rising and falling whistle" not unlike that of Timor Leaf Warbler on the adjacent larger island of Timor.

Five years later Philippe Verbelen and Veerle Dossche visited Rote Island to observe and study the birds, and succeeded in making detailed observations and obtaining a series of photographs. Philippe noticed that the leaf warblers looked substantially distinct from any other Asian, African or European species with which he was familiar: "Alarm bells went off when we realised how strikingly different the bill shape and the coloration of the Rote bird were compared to all other leaf warblers." The long bill had a yellow-orange lower mandible, and additionally the undescribed warbler showed a broader and more yellow supercilium than in Timor Leaf Warbler, a more prominent yellow crown stripe, warmer yellow sides of the head and underparts, and an olive-green rather than olive-grey crown. 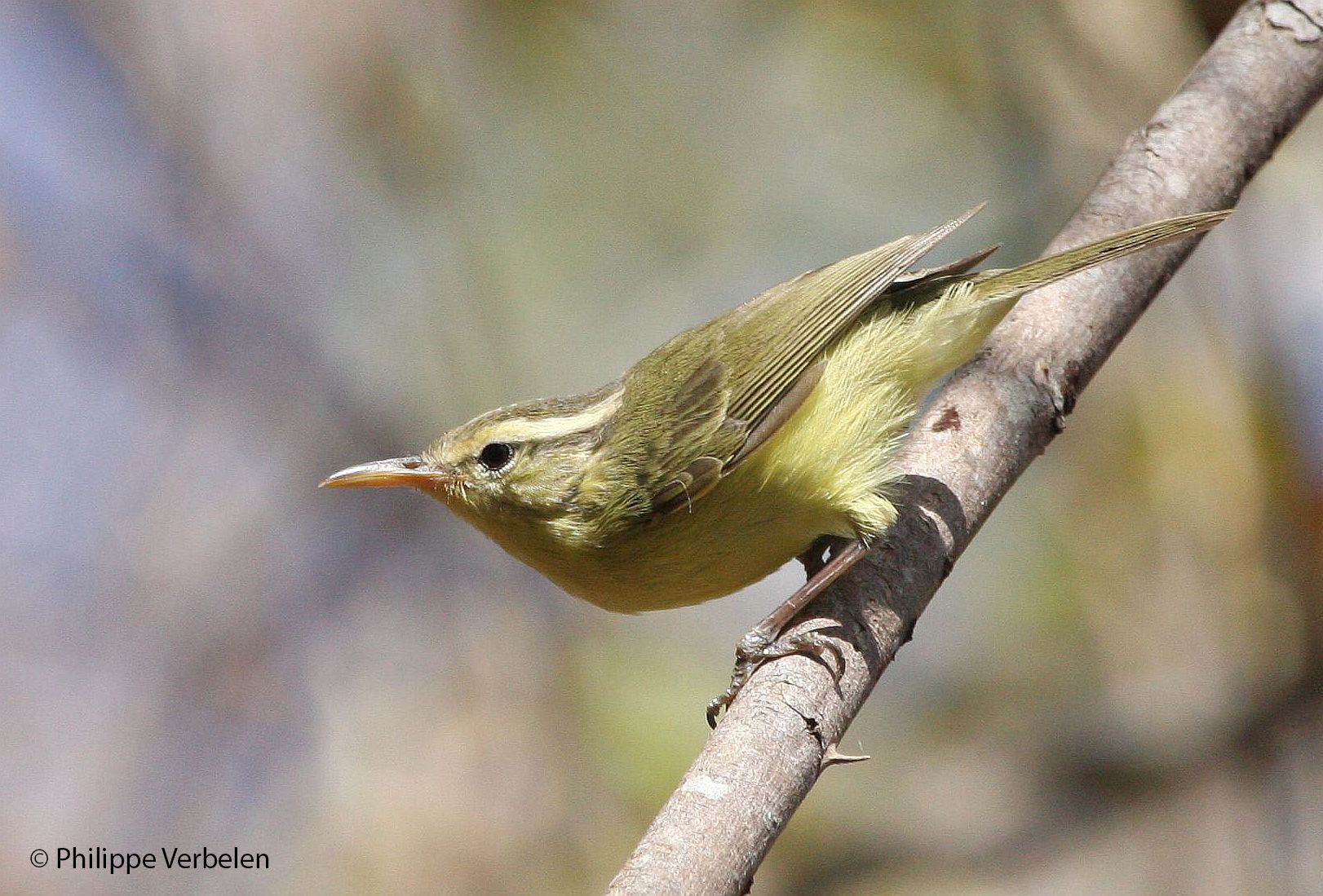 In 2015, as part of an expedition to study this new taxon, ornithologists visited two sites on Rote Island – one south of the central region within Seda forest, which is one of the few small mature forest patches still remaining on the island, and the other on the Tapuafu peninsula, where the warblers were first discovered. Using playback, they were able to observe the birds' movements and behaviour, and a holotype specimen was collected. The researchers say they do not believe that collection of this single individual had a negative impact on the survival of the taxon, and emphasise that all fieldwork was conducted according to the government guidelines of the Republic of Indonesia and the Republic of Singapore.

The specimen made detailed morphological and biometric comparison possible with Timor Leaf Warbler, with which the leaf warblers from Rote were initially mooted to be conspecific based on geographical proximity. DNA was also extracted from the Rote specimen and compared with leaf warbler samples from Timor and Peleng, while the genome of the closely related Greenish Warbler P trochiloides viridanus (mapped to the complete Zebra Finch Taeniopygia guttata genome) was used as the reference genome. "This may well be the first time – to the best of our knowledge – that a new bird species has been described partly on the basis of genome-wide DNA data," commented Elize Ng, a researcher with the Avian Evolution Lab (AEL) under the National University of Singapore (NUS) Department of Biological Sciences, and one of the co-authors of the paper describing the species.

"The new species is part of a large group of Asian warblers but is unique among them due to its unusually long bill," said Dr Nathaniel Ng, who was also involved in the description of the bird during his PhD candidature at the Department of Biological Sciences at the NUS Faculty of Science. He added: "This odd bill shape is likely an adaptation to Rote's dry landscapes, given that most other Asian leaf warblers live in humid forest." 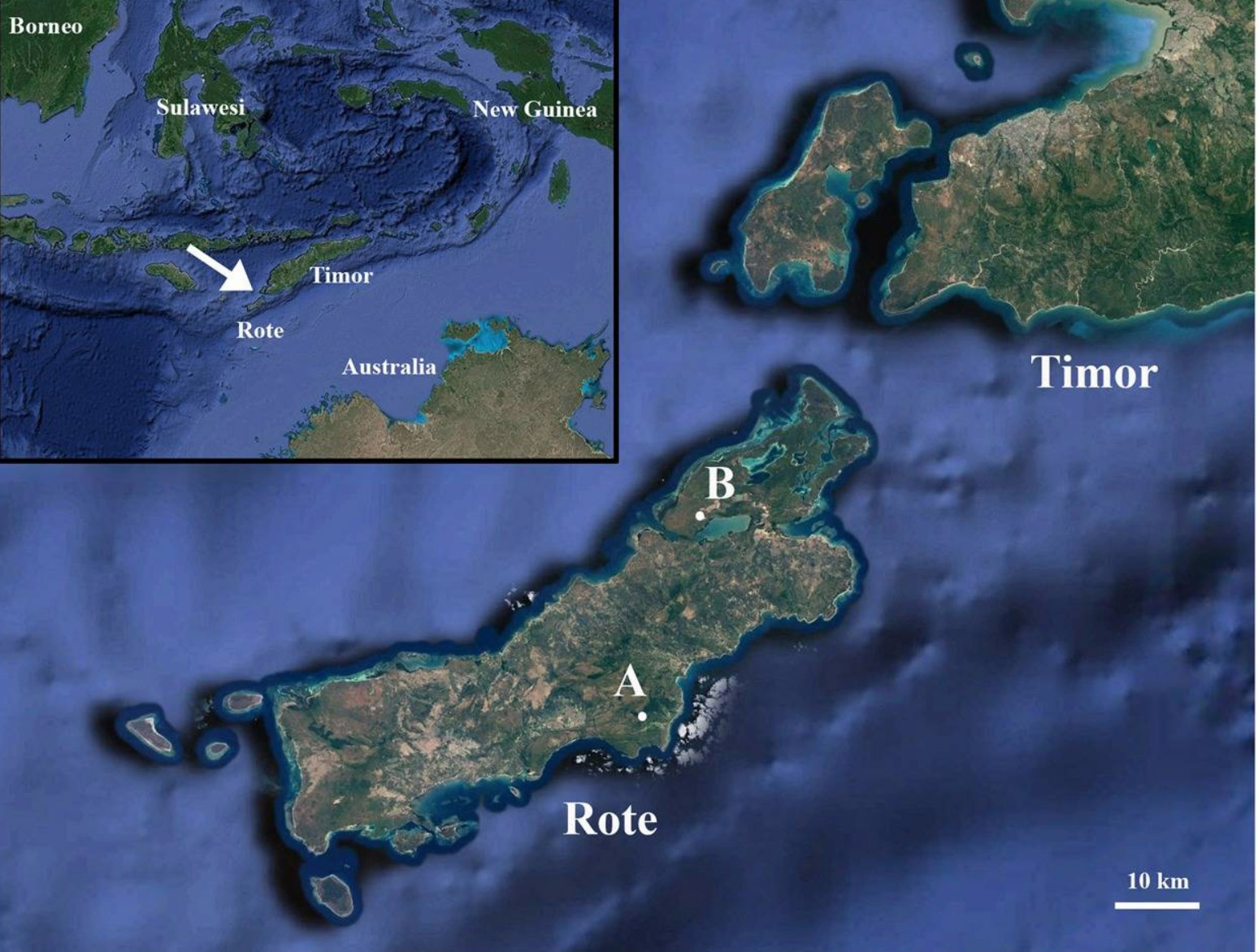 Maps showing location of Rote island in Wallacea (inset) and field localities on Rote Island: Seda forest (A) and woodland close to Bolatena village on the Tapuafu peninsula (B). Reproduced from Ng et al.

Little is currently known about the behaviour and ecology of the new species, which is found in intact primary deciduous forest as well as secondary forest. Due to Rote's long history of intensive agricultural use, there is little forest habitat remaining on the island with the exception of the Tapuafu Peninsula and the Seda forest areas – together they comprise just 19 per cent of the island's total land area of 1,284 square kilometres. An IUCN Red List categorisation of Vulnerable has been proposed, but given that the new leaf warbler does not seem to occur at high population densities, it may even merit Endangered status.

Avian endemism on Rote Island has long been underestimated, the researchers note, and it hosts many species-level endemics as well as an additional number of threatened, range-restricted species including Yellow-crested Cockatoo, Timor Green Pigeon and Jonquil Parrot. Amazingly, Rote Leaf Warbler is the second new bird species to be described from the island in just 12 months, following the formal description of Rote Myzomela Myzomela irianawidodoae (Treubia 44: 77-100), highlighting Rote's significant conservation value and the need to establish significant protected areas to conserve its avian heritage.