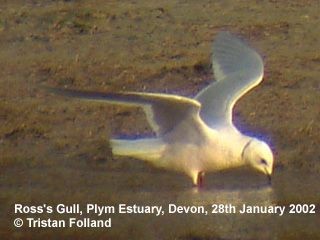 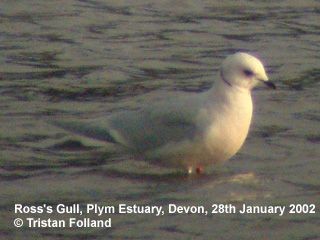 Although not quite the rarity it once was, news of the presence of this enigmatic Arctic vagrant can still be guaranteed to quicken the pulse of even the most lethargic birder. For those who have never seen a Ross's Gull it is always high on the list of 'most wanteds', whilst for those that have, it has an appeal that does not diminish with repeated encounters. Your first sight of this fantastic gull dancing across the pounding surf etches itself deep into the memory.

The species takes its name from James Clark Ross who procured the first two specimens as he explored the Melville Peninsula in June 1823. The location of the breeding grounds of this Arctic species were a mystery for many years, and it was assumed to breed in the high Arctic, a hypothesis further supported by the finding of a nest in western Greenland in 1885. This nest site was unusual though, and it was to be 1905 before the main breeding areas were discovered when the Russian explorer Alexandrovitch Buturlin discovered birds breeding just within the Arctic Circle on the Kolyma River delta of eastern Siberia.

Subsequent exploration revealed that the breeding grounds were found to extend south to 67°-68°N, along with a few breeding records in Canada and Greenland. Nesting may also have been attempted in Spitsbergen in 1955. The main wintering areas are in the northern Bering Sea and Sea of Okhotsk, but it is rare to the south of Arctic seas. Others migrate westwards towards the Arctic Ocean and then further west. In the Western Palearctic late-summer concentrations can regularly be found in Spitsbergen-Franz Josef Land and many are thought to winter in the Spitsbergen area accounting for the sporadic drift of vagrants towards northwest Europe, explaining the virtually annual occurrence of this vagrant to our coastal waters. The peak time for birds is January and February, which between them account for half of the British and Irish records. Ross's Gulls are associated with Arctic drift ice and at this time of the year the drift ice reaches its southern limits and inexperienced birds are susceptible to weather conditions or the attraction of passing trawlers allowing them to become displaced towards northwest Europe.

In Europe it is a scarce vagrant with the vast majority of records from Britain and Ireland and Iceland, with records as far south as France, Spain and Sardinia. There have been over 90 British and Irish records, the first of which was an exhausted 1st-winter on Whalsay (Shetland) on April 1936, which later died. The next was a bird found dead in 1960 and the first bird to linger was one at Bridlington (East Yorkshire) from 17th to 22nd February 1962, but was only seen for a total of 90 minutes during its stay. Indeed this record was significant enough at the time to merit a sizeable article on the circumstances surrounding its occurrence in the Sunday Times. Generally confiding, many of the British and Irish records have been located at sewage outfalls or fish quays in the northeast and north of Britain (see figure 1).

Figure 1: Reports of Ross's Gull by county to end-2000 (from CD-ROM Guide to Rarer British Birds)

There has been a dramatic upsurge in sightings since the beginning of the 1980s with 10 records in 1983 and nine in 1995. News of a bird in Devon on 28th January will have been a welcome bonus for southern birders where there are relatively few records. However, in line with the increase in records nationally, at least five have been seen for protracted stays over the last decade or so in Devon and Cornwall the first of which was in 1988 in Cornwall and then on the Plym Estuary.

The bird in Devon at present is an adult showing signs of summer plumage. It is frequenting the northern end of the Plym Estuary in Plymouth. Directions for this bird are as follows: park in the car park at Sainsbury's and follow Plymbridge Walk over the bridge and south along the east bank of the River Plym to view from the vicinity of SX515556. Interestingly a probable adult was reported in Hampshire on 25th January and could conceivably have referred to the same individual.