Ringing in Extremadura: a layman's perspective

Whilst out birding with my friend Fergus Crystal recently, he mentioned he would be ringing on the following Sunday, and would I like to come along. Having never been ringing before, I thought a new experience would be very interesting, and as long as I wouldn't be in the way, I agreed. Fergus has been living in Extremadura since 2007, working on a three-year study on Montagu's Harrier breeding colonies in three different habitat types in Badajoz, and more recently studying plants and insects in the region.

We were to be ringing with Luis Lozano and his team, the only ringers here in Extremadura. Luis Lozano is a conservation officer for the Extremaduran Department of Environment, working on projects associated with steppe birds and raptors. Most of his work is on Great Bustards, censusing numbers and protecting their habitat. Luis is the president of the small but dedicated Extremaduran Ringing Group, specialising in monitoring various sites for migrant passerines, primarily in the Guadiana valley in the centre of the region. His primary assistant is Olga Jimenez, who has an uncanny calming effect on birds in the hand, the birds relaxing immediately. The team was completed by trainee ringer Lorenzo, and another biologist, Borja.

Sunday dawned, and we were out in the chilly countryside bright and early, and as we arrived, the team were removing what seemed like a whole flock of Spanish Sparrows from the nets. Despite it being a fairly cool morning, off came Fergus's shoes, trousers were rolled up to the knees, and into the cold water he went to help extract the birds. The water, being thigh deep, soaked his trousers but, unperturbed, he carried on, and they were soon all in bags, calm and warm. Fergus has mainly ringed in Israel, so cold, thigh-deep water in Extremadura in February was a little different to what he was used to. But he took it all in his stride, and soon dried off as the sun rose, the others being fine in their thick neoprene chest waders. 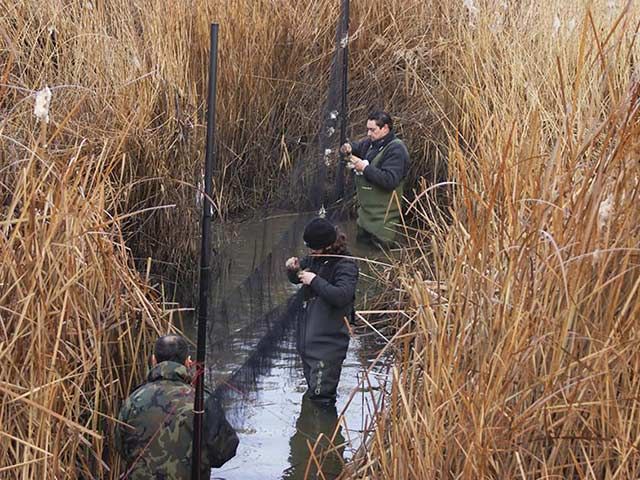 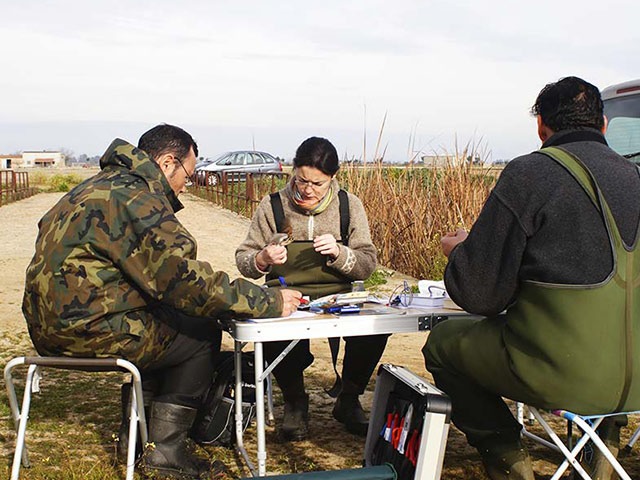 The netting site has been the subject of their study for some years now. It is a field drainage stream, overgrown with reedmace and Phragmites, excellent habitat for a number of species, including their target for the day, Bluethroat. First out of the nets were the 30 Spanish Sparrows, caught as they left their roost site in the reeds, and they were quickly processed at the ringing station: wings measured, retraps noted, weighed, examined for fat content, aged then set on their way to continue feeding. 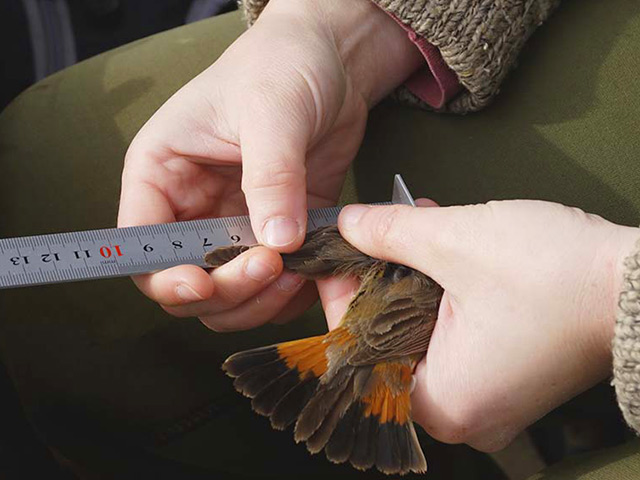 Measuring the wing length of a Bluethroat (photo: Steve Fletcher). 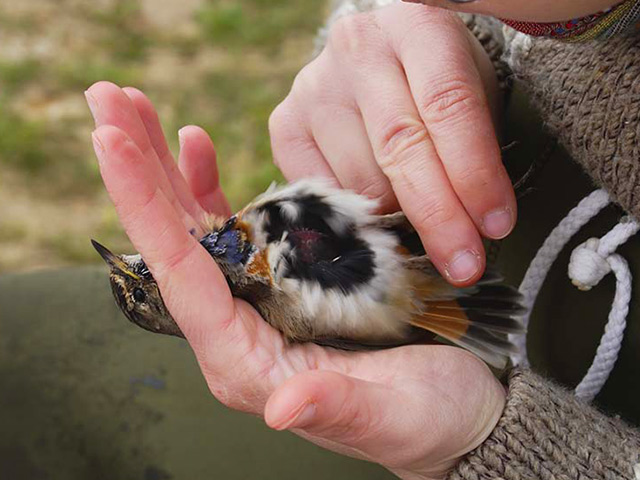 Checking for fat content on a Bluethroat (photo: Steve Fletcher).

As soon as all the sparrows were processed, the nets were checked again, this time holding a few Chiffchaffs, Cetti's Warblers, Reed Buntings, a male Kingfisher and the first Bluethroat of the day. I have photographed thousands of wild birds through a long lens, but it gives little perspective, and is a very poor medium through which to judge actual size, so I was amazed at just how tiny all these birds are. Behaviour of the birds in the hand was an insight too, most remaining very calm, obviously helped by the skill and proficiency of the ringers, and as soon as the hand was opened the birds flew off unperturbed, usually landing fairly close to have a quick preen. The exception was the Kingfisher, which behaved more like a Wryneck, holding its head up and slowly turning it from side to side, which again is normal behaviour. 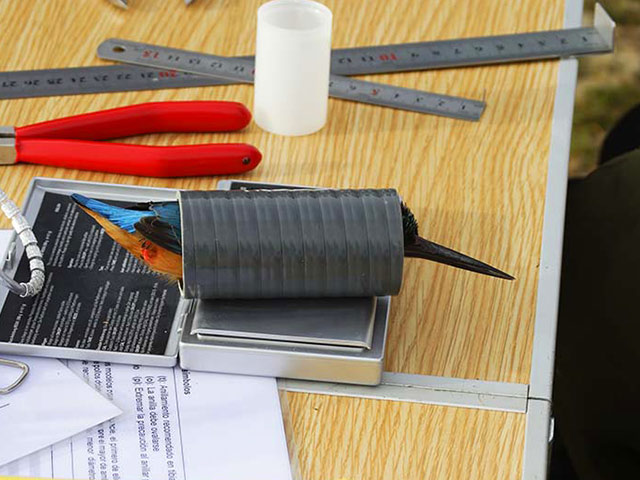 We finished the ringing session about 2pm, as things were getting a little slower, and it looked like rain. The team had ringed 30 Spanish Sparrows, 10 Reed Buntings, five Waxbills, six Chiffchaffs, two Robins, three Penduline Tits, eight Tree Sparrows, three Kingfishers, three Cetti's Warblers, a Starling and 10 Bluethroats, strangely all males. When you consider there were four nets spaced over about 300 metres, it's incredible to think of all these birds present in such a small area, and we certainly didn't catch them all, so just imagine how many birds, and specifically Bluethroats, must be present in the hundreds of kilometres of identical habitat here in Extremadura: the mind boggles. 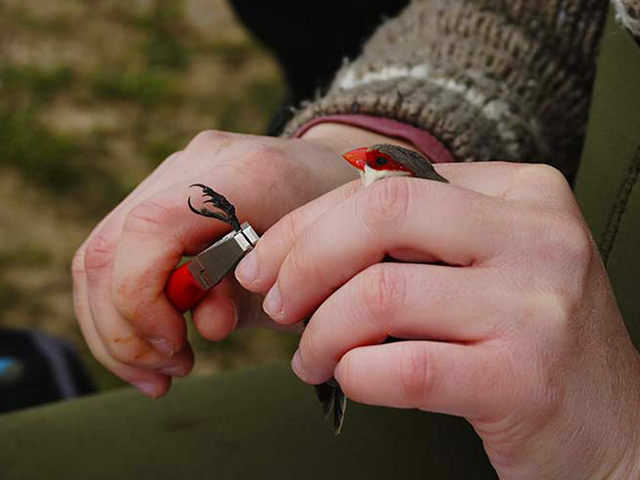 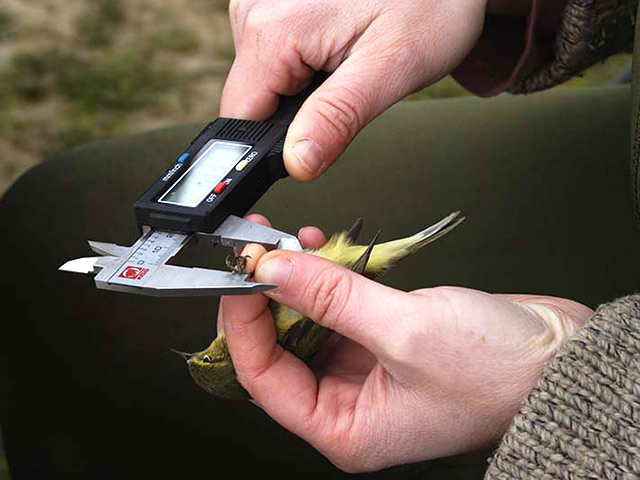 Standard biometrics, such as leg length on this Chiffchaff, are taken on ringed birds (photo: Steve Fletcher).

Over the morning's ringing, it was clear to see how different birds were moving at different times of the day, the Kingfishers being quite late starters, and the Penduline Tits even later. It was an extremely enjoyable experience, one which I will most certainly be repeating, and it opened my eyes to the dedication of small bands of scientists giving up their own time to the dedication of bird protection and welfare, a scene being repeated unobtrusively all over the world.