In spring 2010, I spent three months living and working at Parc Natural dels Aiguamolls de l'Emprodà, Catalonia, Spain. The first instalment of my trip report can be read here.

Being in the field every day gave me chance to see, and often find, a whole host of interesting things. My job at Aiguamolls was to help with the spring migrant ringing scheme run by the Catalan Institute for Ornithology (ICO), which resulted in most of my time being spent on or around the ringing site. Possibly the most remarkable series of sightings was in mid-April. One evening, on my way to the reedbed nets, I heard a 'tack' coming from the edge of the reedbed. Expecting to see a Moustached Warbler, I was shocked when there in front of me was a stunning Aquatic Warbler. It wasn't the first at the site this spring, and wasn't even the first one I'd seen here, but it was my first in the field and a nice one to find myself. The bird then headed back into the reedbed and, amazingly, started singing. A nice end to the day. 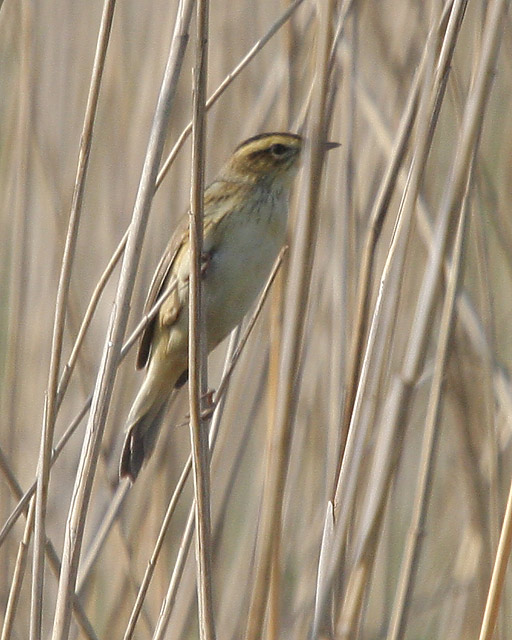 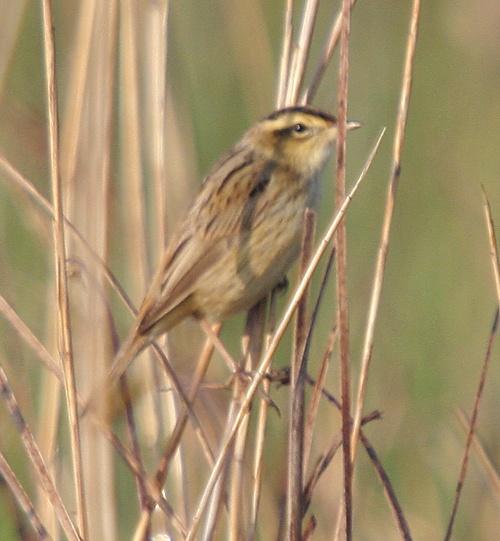 Despite having so many chances, I never did manage to get an unobscured, in-focus shot of an Aquatic Warbler in the field. (Photos: Stephen Menzie)

The next morning was quiet and I went back to the same spot to see if the Aquatic Warbler was still present. I could hear it singing in the reedbed and eventually managed to track it down. On raising my bins, I was stunned to see two Aquatic Warblers side-by-side. As I watched, unbelievably a third bird appeared in my field of view for a second before all three moved off in different directions. However, over the rest of the morning I was only ever able to locate two individuals at any one time and started to doubt myself — not because of what I saw, or didn't see, but just because surely it was impossible to have three Aquatic Warblers together in the same small patch of reeds. I really wanted some concrete proof that there were three birds in there.

The next morning, there was an introductory ringing course at the site. I did the first net round and, not too surprisingly, found an Aquatic Warbler in the reedbed net. I took the birds back to the ringing caravan, left them with Oriol Clarabuch from ICO and headed back into the reedbed. There, much to my relief, I found two singing Aquatic Warblers in roughly the same place as last time. I returned to the caravan to find the first bird still there waiting to being ringed. So there were three birds after all. The bird we had just caught was the fifth to be ringed at the site over the spring and, amazingly, both of the birds we were watching in the field were unringed, making a total of seven birds. It is my suspicion that there was also an eighth a few days later, with one more seen in the area a few weeks later, presumably different to any of the previous birds. 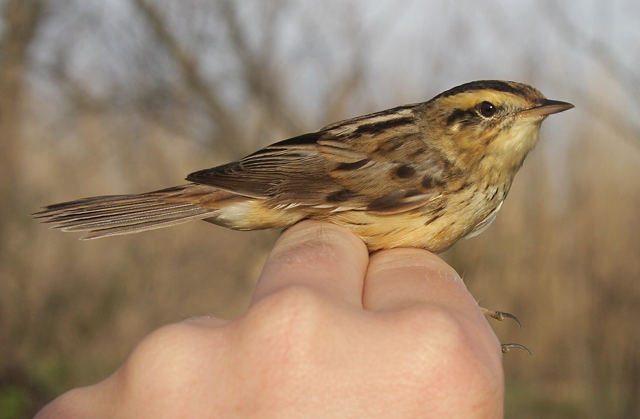 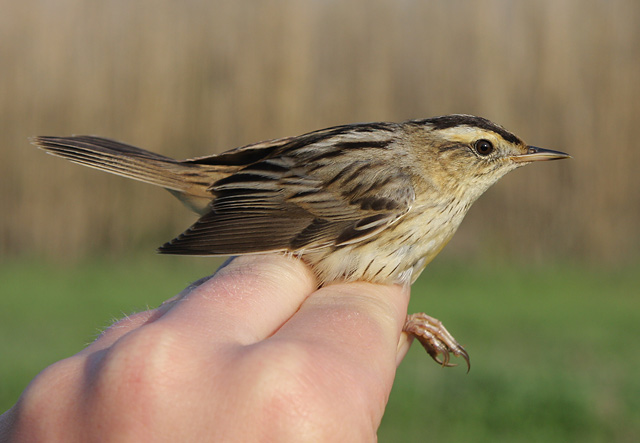 Two of the five Aquatic Warblers ringed on site over the spring. The degree of individual variation in plumage, particularly the degree of straw-yellow colouration and streaking on the breast, was quite remarkable. (Photos: Stephen Menzie) 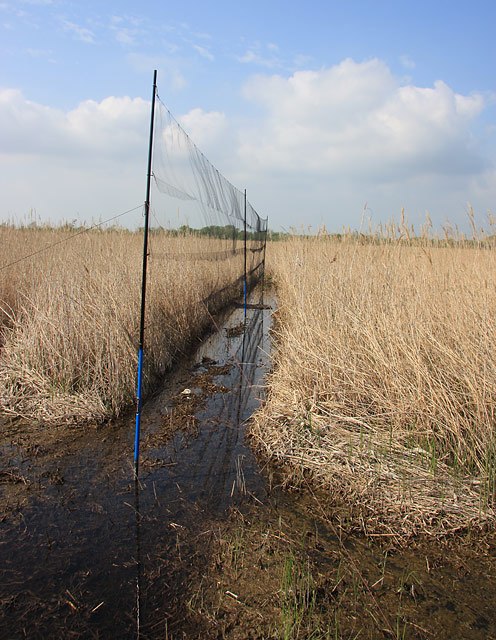 The far net of this pair of reedbed nets caught all of the Aquatic Warblers at the site in the spring. (Photo: Stephen Menzie)

Aquatic Warblers weren't the only Acrocephalus warblers to put in a good show in spring 2010. The real surprise of the spring came in the form of Reed Warblers — quite literally thousands of them. Over the past 10 years, numbers of Reed Warblers caught have averaged about 650 a year, and the previous record year was 900 — we caught nearly 2,000. We also managed to notch up record totals for Great Reed Warbler (128) and Moustached Warbler, whilst numbers of Sedge Warblers were also above average. Presumably the flooded habitat played as large a part in these high numbers as migration patterns did, especially as Moustached Warbler is resident, so shouldn't be affected by conditions that might influence numbers of migrant species. This was not the case for Reed Warblers, though, which were rapidly passing through the site on their way north. It was interesting to note that the vast majority of birds flew into the nets from the south, whilst most of same-day retraps came from birds that were caught again at the northern end of the ringing site. 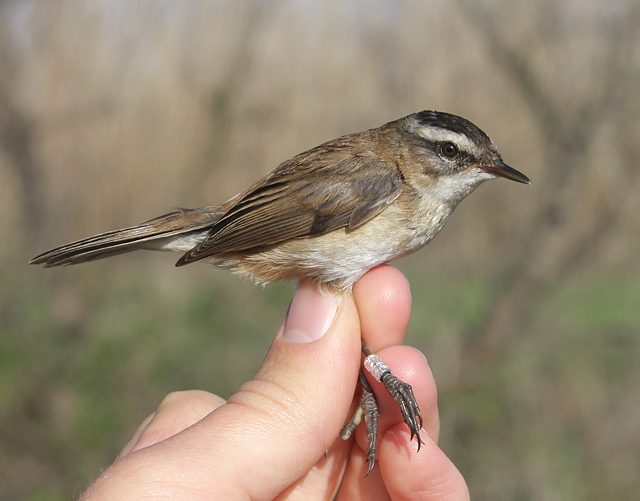 One of the locally-breeding male Moustached Warblers. (Photo: Stephen Menzie)

I'd like to say it wasn't all about the Acros, but I'm afraid to say it mostly was. The Reed Warbler total made up half of our catch over the three months and on some days more than 90% of the individuals caught were Reed Warblers, with Great Reed Warbler coming second. The remainder were usually locally breeding Cetti's Warblers and Nightingales. The mix of species wasn't always so limited, though, and we ringed 68 species in total. These ranged from Little Bittern to Corn Bunting via Spotted Crake, Long-eared and Scops Owl, Cuckoo, Wryneck, Fan-tailed Warbler, Wood Warbler and Penduline Tit. 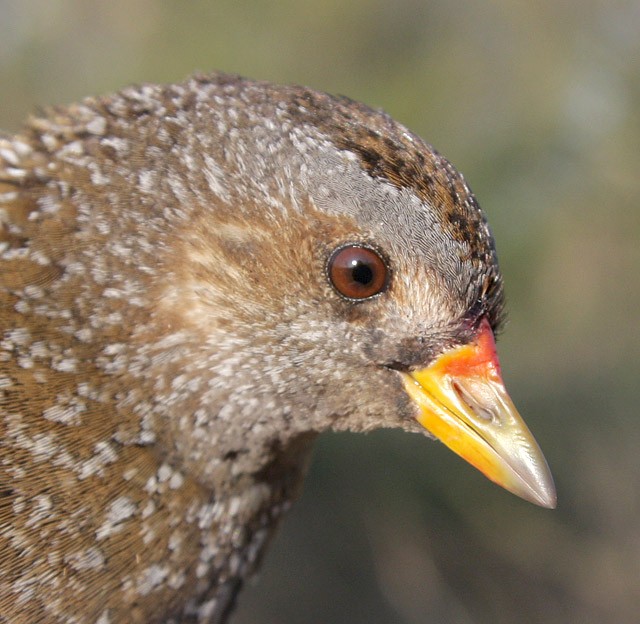 This Spotted Crake had been feeding around the reedbed ride for two days. On the third day it finally wandered into a trap we'd placed nearby — the first bird of any species to have been caught in the trap in over three years. (Photo: Stephen Menzie) 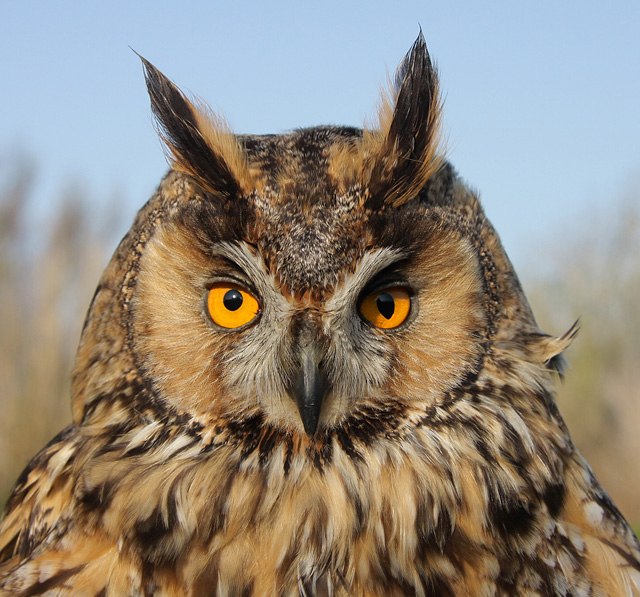 This Long-eared Owl was a surprise catch in the nets one morning. (Photo: Stephen Menzie) 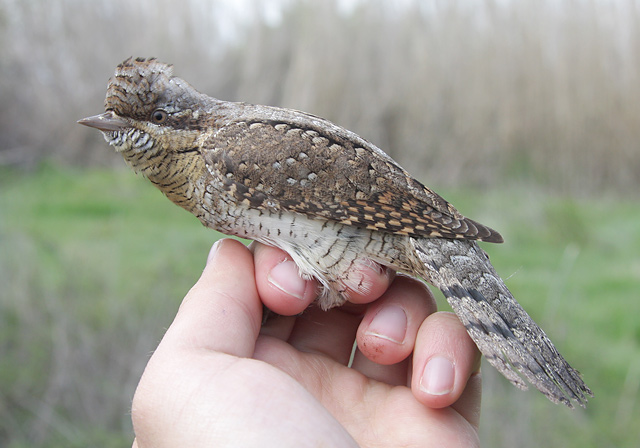 The only Wryneck to be caught this spring — a second-year bird. (Photo: Stephen Menzie) 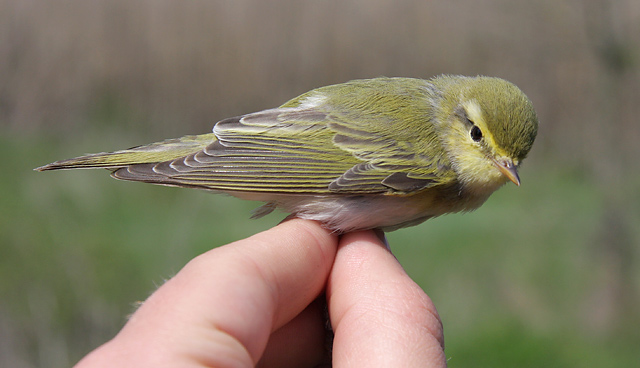 One of six Wood Warblers to be ringed on site over the spring. (Photo: Stephen Menzie) 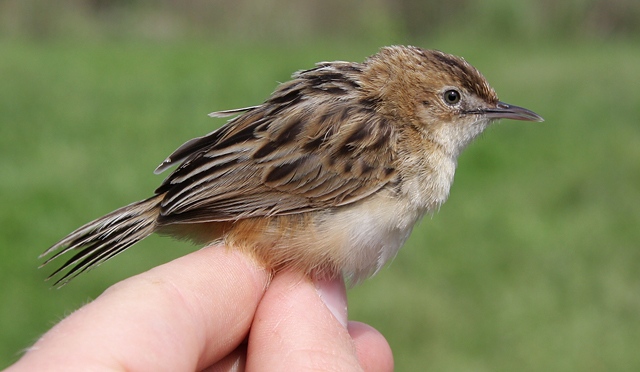 An extremely common species, Fan-tailed Warblers were surprisingly hard to mist-net. On more than one occasion I watched as one crawled up and out of a net as I approached. This bird can be sexed as a male thanks to the extensive black colouration inside its mouth, appearing exactly as if the bird had just downed a cup of black ink. It is just visible along the bird's gape line in this photo. (Photo: Stephen Menzie) 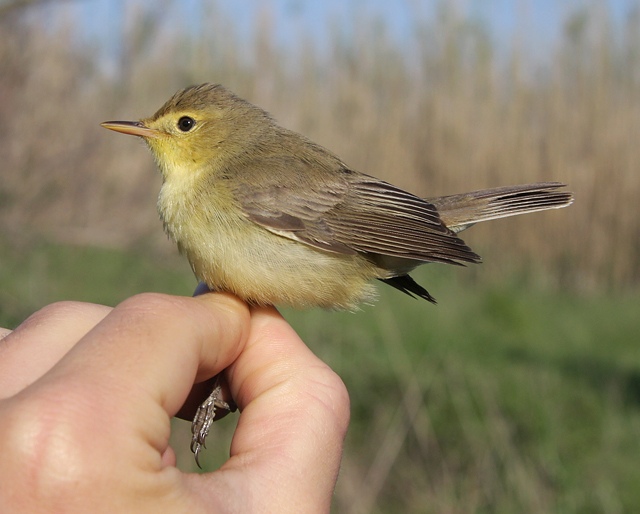 Given recent mishaps in the UK, it is interesting to note that pale-edged tertials and secondaries are a perfectly normal feature of Melodious Warbler. (Photo: Stephen Menzie)

With so many birds of such a diverse range of species handled, never a day went by when I didn't learn a whole host of new and interesting things about the birds I was handling. Be it a Spotted Flycatcher with a relatively limited post-juvenile moult or a Yellow Wagtail that made you give up on ever trying to assign a subspecies to a Yellow Wagtail again. 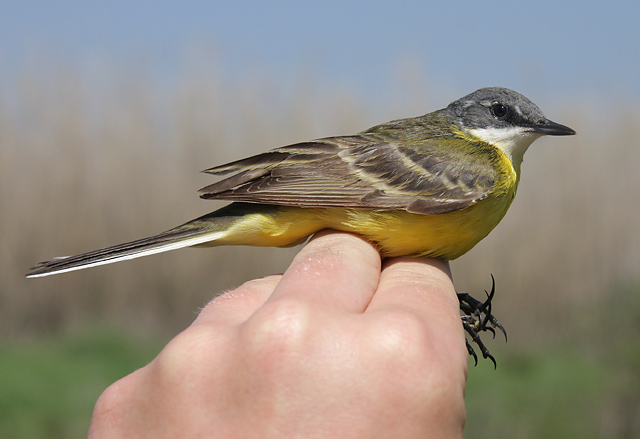 Assigning flava wagtails to race is no easier in the hand than it is in the field. This bird seems to be an intergrade between cinereocapilla and iberiae, although the trace of yellow on the throat might even hint at an influence of flava at some point. (Photo: Stephen Menzie)

Rarest bird of the spring was an adult Iberian Chiffchaff, although equally rare was a hybrid Swallow × House Martin. Relatively speaking, we did very well for interesting Swallows. Out of fewer than 200 caught, in addition to the hybrid, we retrapped a French and a German bird. We didn't do too badly with Reed Warblers either, retrapping several Spanish-ringed birds and ones and twos from Slovenia, Slovakia, Austria, Belgium, France and Italy. It's interesting to note the easterly bias in the ringing locations. 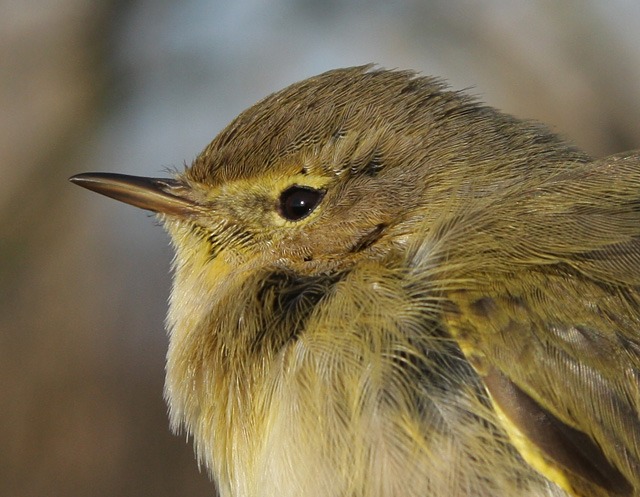 The strongly saturated yellow fore-supercilium, spiky-looking bill and very weak, diffuse loral markings all add up to give this adult Iberian Chiffchaff a rather distinctive look. Biometrics confirmed its identity. (Photo: Stephen Menzie) 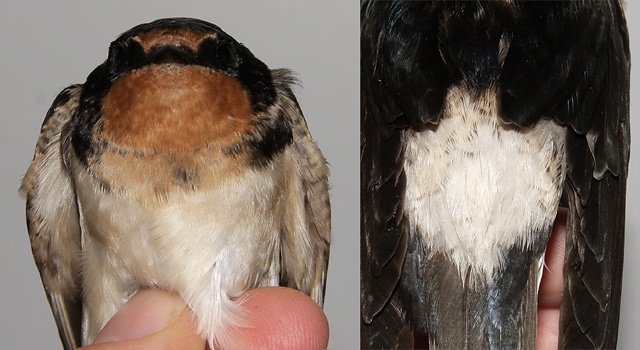 Taking this out of the net at dusk, I initially enough it was an extremely early juvenile Swallow. It was only when I turned it over and saw the white rump that I realised what it was, a Swallow × House Martin hybrid. In addition to the features visible in this photograph, the bird also showed feathered legs and feet, a trait inherited from the House Martin side of its parentage. (Photo: Stephen Menzie)

My final few days ringing gave a sure sign that it was the right time to leave. We went from three-figure catches one day to single figures the next. All the migrants had cleared off and most of the resident birds had become wise to the position of the nets. At least the quiet time gave me chance to try and document some of the exciting things I had seen over my time there, such as the extent of post-juvenile wing moult in Cetti's Warblers. Perhaps 'exciting' is a point of view... 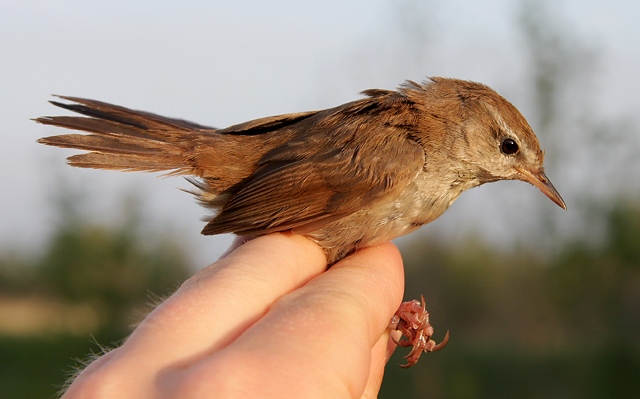 Cetti's Warbler was one of the bread-and-butter species at the ringing site, and the only bird that ever made me bleed! Males have surprisingly sharp claws and an excruciatingly tight grip. Females, like this bird, were never quite so bad. Note the moult limit within the greater coverts, allowing this bird to be aged as a first-summer. The inner, moulted adult-type feathers contrast with the redder-tinged outermost retained juvenile coverts. Imagine the hours of fun you could have trying that in the field! (Photo: Stephen Menzie)

There are countless people I have to thank for making my stay so wonderful. A considerable number of local birders helped me in some way or other, and I must extend my thanks to all of them. Special thanks go to Martí Rodríguez and Marcel Gil, both of whom provided invaluable help, excellent company and, on occasions, food, drink and a bed for the night. Similar thanks also go to Oriol Clarabuch who gave endless help, both with the ringing and elsewhere. Indeed, starting a phonecall with "Oriol, can you send someone to help, I've got my car stuck again" became an all-too-familiar occurrence. Finally, massive thanks have to go to all of the staff and Parc Natural dels Aiguamolls de l'Empordà for making my stay on the reserve as comfortable as possible. 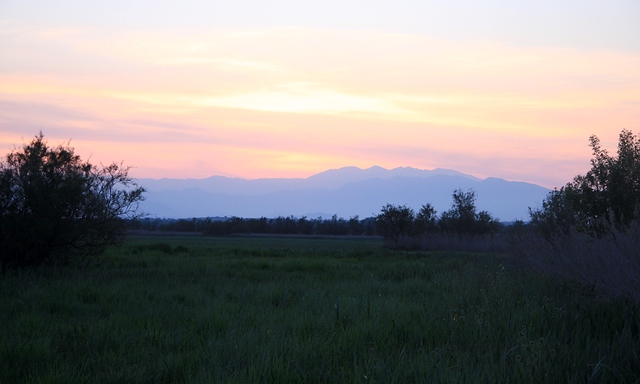 The sun sets behind the Pyrenees on my final evening at the ringing site. (Photo: Stephen Menzie)

I finished my three months in Catalonia with Marcel and Martí, spending a day around Barcelona, ticking off Pekin Robin and adding Nanday and Mitred Parakeet to my 'category C insurance list' in the process. A couple of singing Iberian Chiffchaffs in the hills above Bilbao, some 'Cantabrian' Yellow-legged Gulls around the port, and a brief view of the blow of a Fin Whale were the best of the return trip's sightings. I must admit I was pleased to get back to the UK but at the same time I was really quite sad have left Catalonia. Adéu, Catalunya...until the next time!

Perhaps Nanday Parakeet wasn't the most exciting of species to end my time in Catalonia with. However, with breeding now seemingly well established, this species looks set to join Monk and Ring-necked Parakeet on the Category C list sometime in the near future. (Photo: Stephen Menzie) 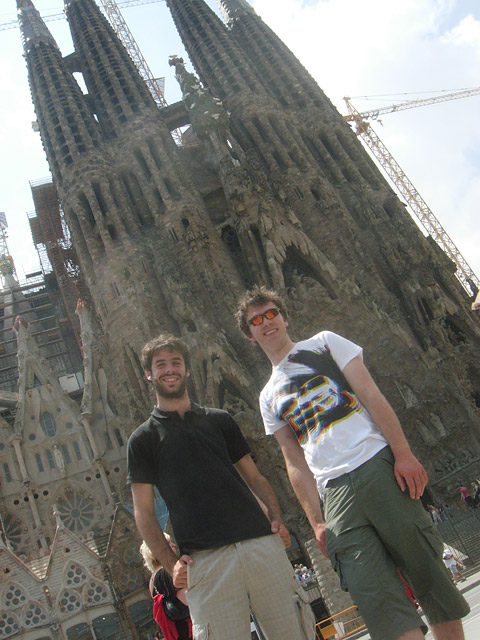