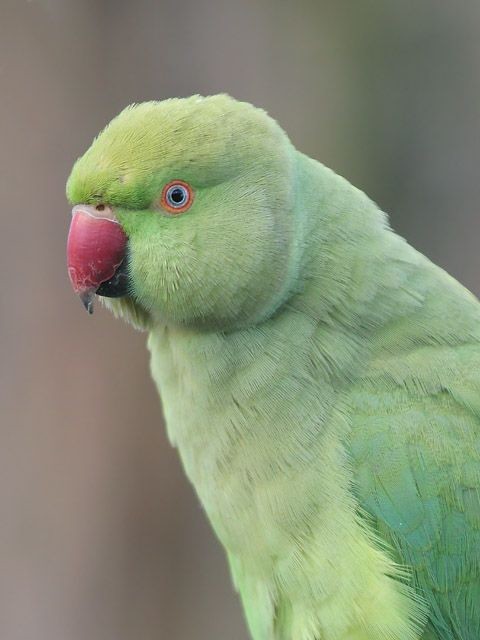 News that Defra has commissioned a study into one of our gaudiest non-native avian species, the Ring-necked Parakeet, has prompted concerns in some quarters that another introduced species could be next in the firing line for control measures at some point in the future.

Ring-necked Parakeets are native to the Oriental and northern Afrotropical regions and are perhaps a surprising part of our avifauna. However, their association with suburban parks and gardens ensures that they have few natural predators. Taking readily to garden bird tables, their numbers have grown rapidly in their adopted environment in recent years.

They were added to the BOU British List on the basis of a self-sustaining breeding population in 1983 and have gone from strength to strength since. The British population (based on roost counts) was put at 4,300 at the turn of the Millennium and by the winter of 2001/02 it had increased to 5,900 birds. It seems likely that the British population is now somewhat larger than this and the spread of this exotic parrot seems inescapable.

Their history as a British bird goes back a long way and early reports that free-flying birds were breeding in the wild came from Norfolk as long ago as 1855. This was followed by breeding in Essex in 1930 and then Kent in 1969. The population increase since then has been dramatic. By the early 1980s around 1,000 birds were distributed across 36 10km squares in England and by 1988-91 birds were present in 63 10km squares.

So, should they be embraced as part of our countryside or not? There are worries that they will out-compete native hole-dependent species such as Jackdaws, Stock Doves and woodpeckers. Their fondness for fruit will also put them in conflict with fruit-growers and gardeners. Both the RSPB and Defra have commented that a cull would be a "last resort". Once again this raises the complex question of what should be done with non-native species that are now resident in Britain. Are Ring-necked Parakeets, and other parrots that may establish self-sustaining populations (such as Monk Parakeet, Alexandrine Parakeet and Blue-crowned Parakeet - all of which have bred in recent years), to be welcomed as part of the varied British avifauna or considered a 'threat' to our native birds ? 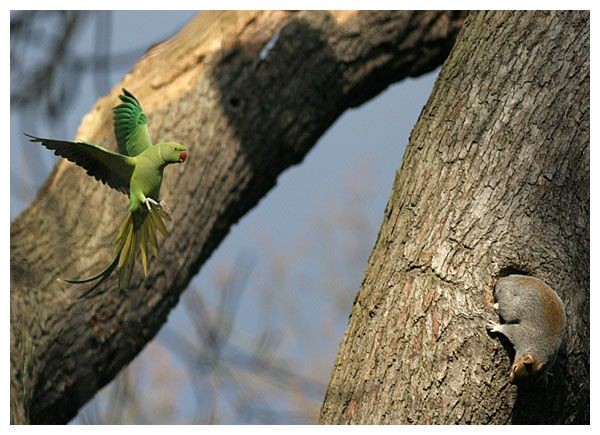 Ring-necked Parakeet: Should 'alien' species be embraced as part of our wildlife? (photo: Tristan Bantock).