A team of researchers at the Memorial University of Newfoundland found that Ring-billed Gull is able to pass the string-pull test, a widely used test to judge the intelligence of a species.

The researchers note that multiple studies of perching birds and parrots have been conducted to learn more about their intelligence, but very few have been carried out for waterbirds. They suggest this is because such birds are considered to be less intelligent than others. To test this notion, the team set up an experiment using string-pull test, in which a treat was placed on a dish and tied to a string, with both placed inside a plastic box with a slit at one end. The slit was just large enough for the dish and treat to pass through. 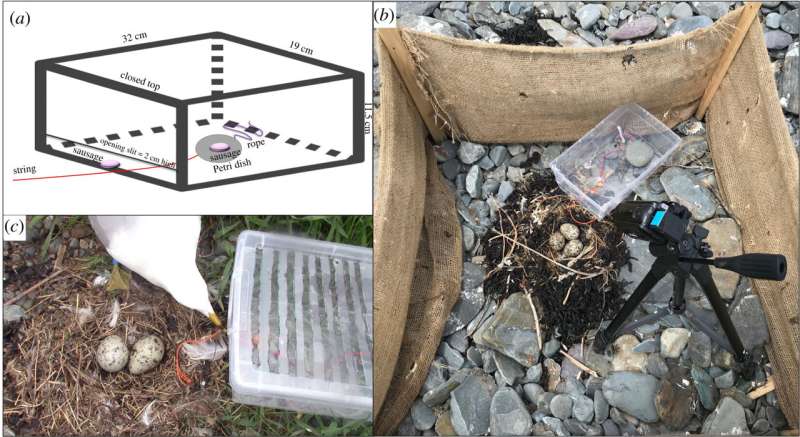 The string-pull setup used to test the cognitive abilities of Ring-billed Gulls in Newfoundland (Lamarre & Wilson).

One end of the string was situated outside of the box. For a bird to gain access to the treat, it must yank the string, pulling the dish and treat through the slit. Scientists suggest it takes problem-solving abilities to pass the test, which is a sign of intelligence.

The experiment started with the researchers placing empty boxes near nests in Newfoundland with a treat placed near them, allowing the birds to become accustomed to eating food near the boxes. Then, they began testing the birds by placing test boxes near 93 nests that were home to 138 parent gulls. They then counted how many birds tried to retrieve the treat from the box, how many succeeded and how many tries it took.

The researchers found that out of approximately 104 attempts, 25% were successful and 21% of the birds succeeded on their first try. They also found multiple instances of birds that were able to repeat their success. They conclude by noting that their experiments mark the first time a waterbird has been found to be able to solve the string-pull test.