February can be slow going but it is one of the best months for rare gulls, so it was fitting that an adult Ross's Gull off Kinnaird Head, Aberdeenshire, on 6th was the headline find this week. The bird lingered offshore for a while around midday but had vanished by mid-afternoon. Aberdeenshire has done quite well for this enigmatic species in the past, with 12 previous records, but neither of the two birds this century stayed more than a day.

Glamorgan was treated to its fourth Spotted Sandpiper at Eglwys Nunydd Reservoir on 6th, which looked promising in distant photographs taken in the afternoon, but was firmed up with closer views the next morning.

Along the River Darwen east of Roach Bridge, Lancashire, the adult male Belted Kingfisher gave itself up to patient observers for much of the week, but there was no sign after a final appearance in the late afternoon of 4th.

There's no doubt we've been spoiled when it comes to Red-breasted Geese this winter, but an adult among the Dark-bellied Brent Geese at Cley NWT and Blakeney from 3-6th delighted Norfolk birders and proved wonderfully obliging. Grazing at close enough range to hear its enchanting call, it provided the first chance to catch up with the species in Norfolk in more than five years. The adult in Essex remained at South Fambridge to the end of the week, too, with Lincolnshire's example noted again at Frampton Marsh RSPB on 3rd.

The adult Ross's Goose continued its stay east of Milngavie, Clyde, with sightings on most days this week. The last report was in a field south-east of Baldernock on 6th. Richardson's Cackling Geese were still on North Uist, Outer Hebrides, on 2nd and at Doonbeg, Co Clare, on 4th.

The three white-morph adult Snow Geese remained near Loch Spynie, Moray, to 6th and one was at Twatt, Orkney, again on 31st. Another adult flitting along the English-Welsh border at Dee Marshes from 30-2nd amazingly constitutes the first Welsh record, and is presumably the bird logged over Frodsham Marsh, Cheshire, on 3rd. Black Brant were noted in East Yorkshire, Essex, Dorset, Norfolk and Co Louth (two). 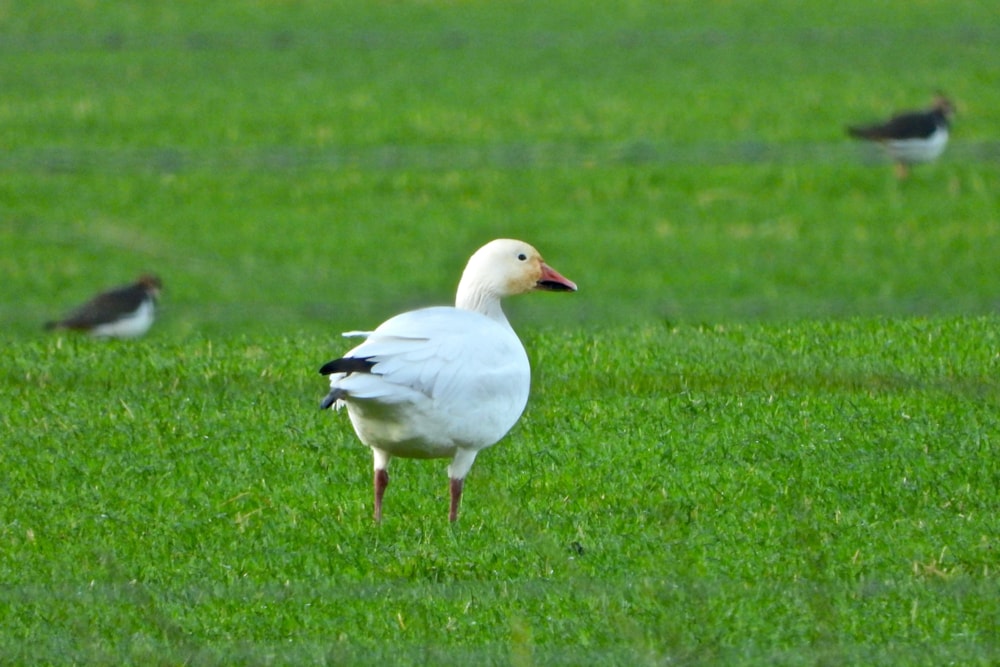 In Somerset, the drake Baikal Teal remained popular at Greylake RSPB, last reported among the hordes of Eurasian Teal there on 5th. The drake in East Yorkshire put in another appearance at Swine Moor on 2-3rd. The Ferruginous Duck was again at Aqualate Mere, Staffordshire, on 4th and 6th, while the drake at Thorpe Park, Surrey, just made it into the week. The adult drake White-winged Scoter was clocked offshore at Musselburgh, Lothian, again on 6th, which hosted one of the week's seven Surf Scoter. Mornington, Co Meath, was the only site to hold more than one of the latter species, with the pair still present at the end of the week. Others remained in Conwy, Scilly, Cornwall and the Outer Hebrides. Two King Eider were again in Bluemull Sound, Shetland, on 31st, and the drake showed nicely offshore at Nairn to 3rd. 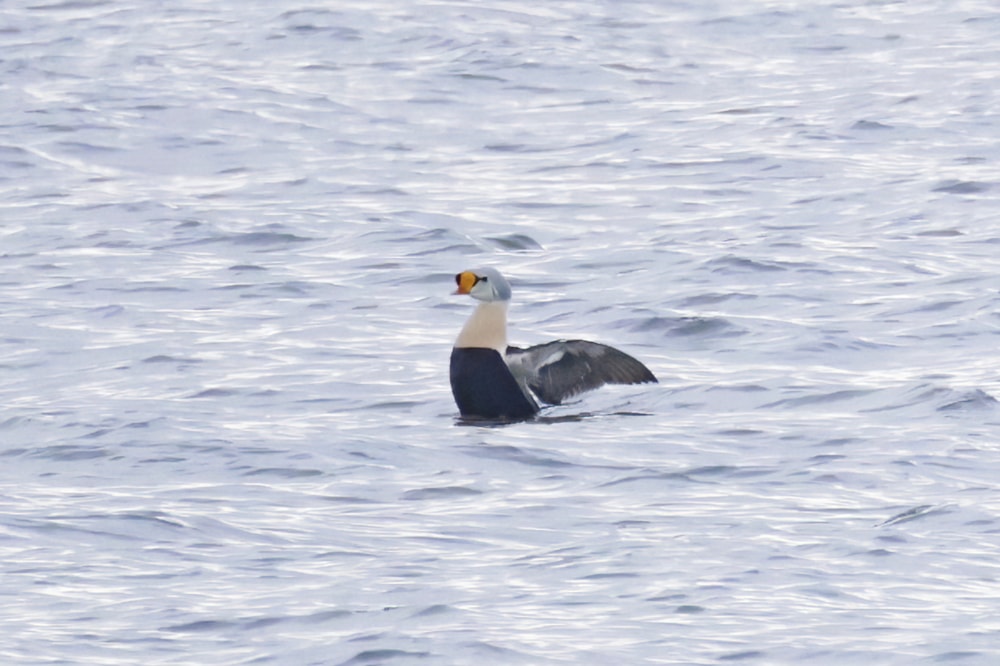 There was a report of the American Black Duck again on The Mullet, Co Mayo, on 31st, the first known sighting of it since late October last year. Two Lesser Scaup were discovered at Woodend Loch, Clyde, on 2nd, with news going out on 6th, when they were still on site. Three females were in the Outer Hebrides this week, including a new bird, while other lingering individuals were on Tresco, Scilly, to 2nd, at Auchincross Loch, Ayrshire, to 3rd, and Oxford Island, Co Armagh, and Abbotsbury Swannery, Dorset, both to 6th. 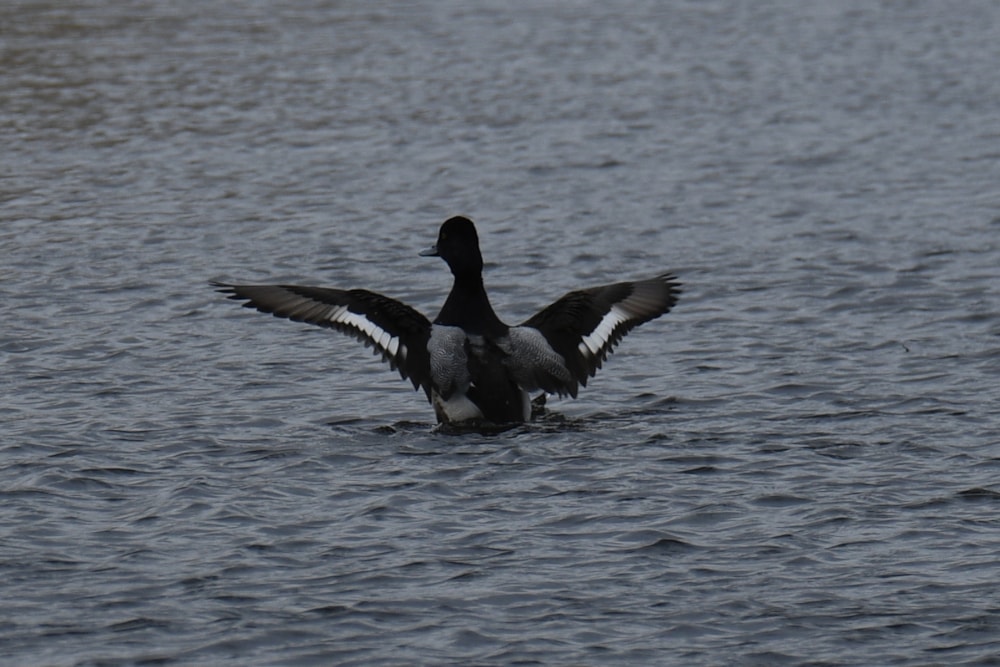 Drake American Wigeon remained at Idle Valley NR, Nottinghamshire, to 6th and Crook of Baldoon, Dumfries & Galloway, to 4th, while the drake at Ballyallia Lake, Co Clare, was last reported on 2nd. A total of 10 Green-winged Teal were seen in Britain and Ireland this week, including the two in Staffordshire and new birds at Venus Pool, Shropshire, and Coryton, Essex. Ring-necked Duck were still plentiful, with birds in 25 counties in Britain and Ireland. Most notable was a flock of six at a former opencast site at Kenfig Hill, Glamorgan. 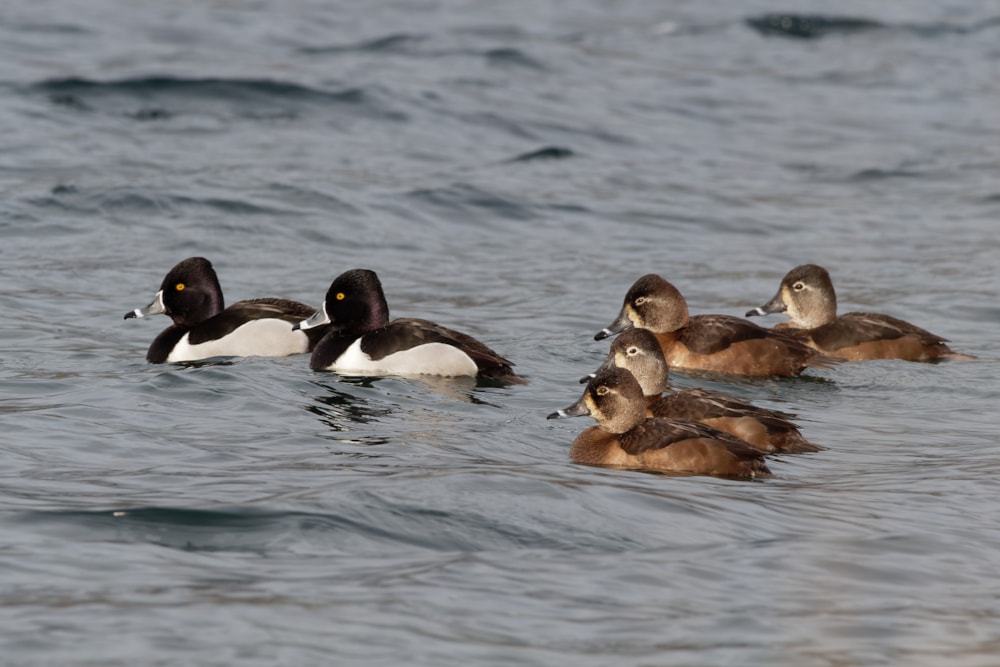 Eglwys Nunydd Reservoir, Glamorgan, continued to host the juvenile Pacific Diver, which remained there to dusk on 6th. In Shetland, the adult White-billed Diver reared its head in South Nesting Bay on 2nd. 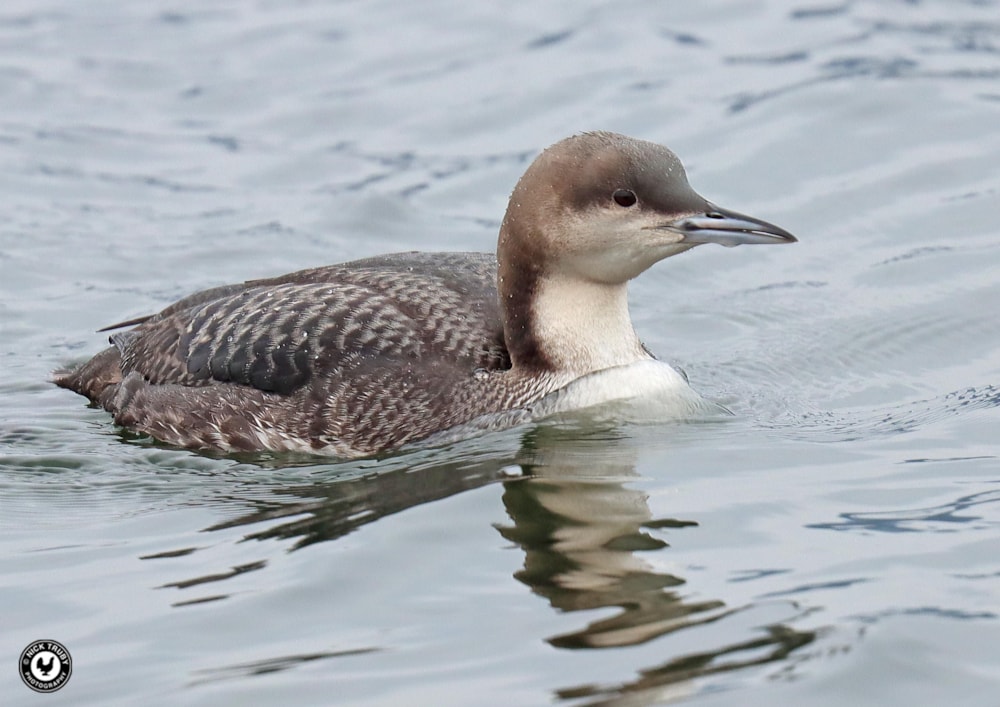 The White-tailed Lapwing was still on offer at Halton Marshes, Lincolnshire, at the week's end. The adult Semipalmated Plover racked up at least its 125th day at Crookhaven, Co Cork, on 2nd. Lesser Yellowlegs continued their stays at Minsmere RSPB, Suffolk, and Rahasane Turlough, Co Galway, to 6th. A Grey Phalarope was along the seafront at Fraserburgh, Aberdeenshire, on 6th, following a sighting of two past Cley, Norfolk, on 31st. 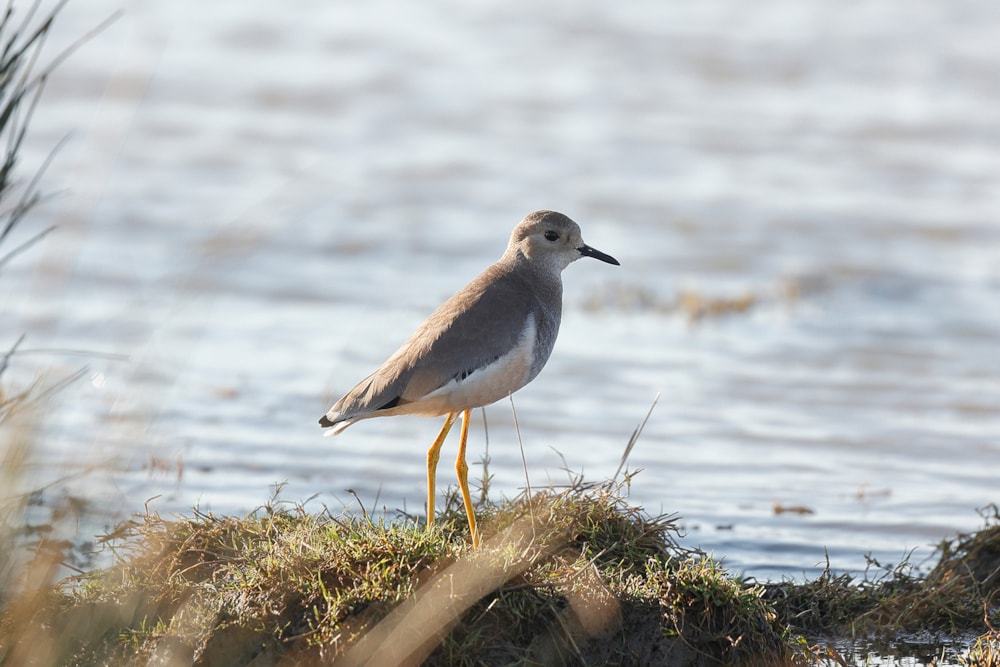 Seawatchers at North Foreland, Kent, were treated to a close-in adult Sabine's Gull on 31st. All of the week's seven Ring-billed Gulls were long-stayers, and all but the first-winter in Cork City were adults, with two in Lothian and others in Cornwall, Clyde, Hampshire and Co Kerry. Kumlien's Gulls were logged in the Outer Hebrides, Orkney and Cambridgeshire. Just four Great Grey Shrikes were reported on their winter territories this week. The bird at Bryn Trillyn, Conwy, was there on 4th, while reports on 2nd confirmed the birds at Glen Feshie, Highland, and Wistow, North Yorkshire, as still present. The individual at Comberton, Cambridgeshire, was last noted on 1st.

The trio of Eurasian Penduline Tits delighted crowds at Weston Airfield, Somerset, to 5th, with at least one still present at the end of the week. Cornwall's Rosy Starling enjoyed the palm trees of Lower Boscaswell, Pendeen, to 31st. Patient observers were rewarded with views of the European Serin near Maples Cross, Hertfordshire, to the end of the week, with the bird at Axmouth, Devon, seen again on 2nd. 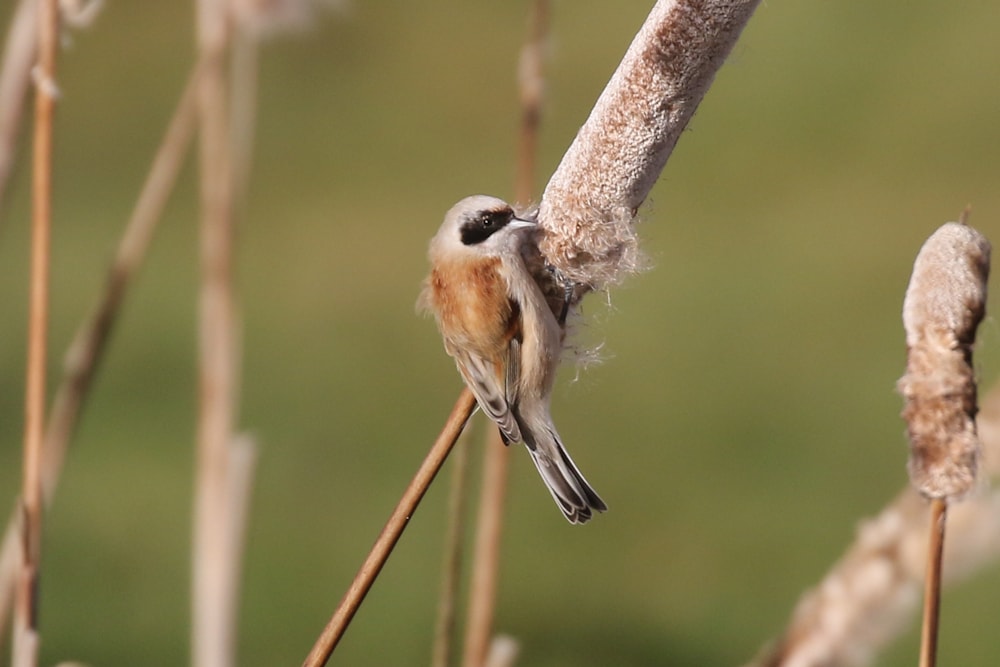 Frustratingly, again only flight views were possible of the wintering Greater Short-toed Lark at West Runton, Norfolk, on 4th. At the end of the week, the seven Shore Larks were still at Leysdown-on-Sea, Kent, as were the flock of three on Holy Island, Northumberland, and four between Burnham Overy and Holkham Gap, Norfolk.

Along the banks the River Trees near Middleton-in-Teesdale, the Red-flanked Bluetail was still performing to admirers in its favourite spot on 5th. The American Buff-bellied Pipit was still at East Prawle, Devon, on 5th, when a Richard's Pipit was new at Steart, Somerset. In the South-East, the Hume's Leaf Warblers at Eastbourne, East Sussex, and Bockhill Farm, Kent, were present to 3rd and 5th respectively. A Pallas's Warbler was reported at Brancaster Staithe, Norfolk, on 1st. 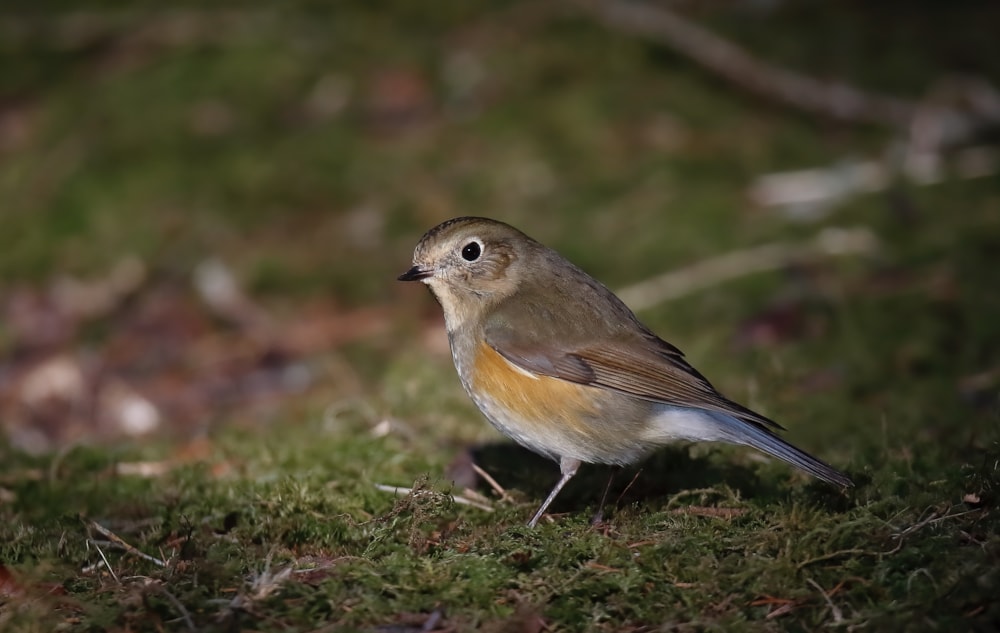 In Norway, the third-winter Glaucous-winged Gull in Trøndelag, was relocated at Stjørdal on 1st and lingered there till 3rd. The Black-throated Thrush at nearby Steinkjer also held on, while Sweden's Siberian Rubythroat remained at Vargön, Västra Götaland, on 2nd. 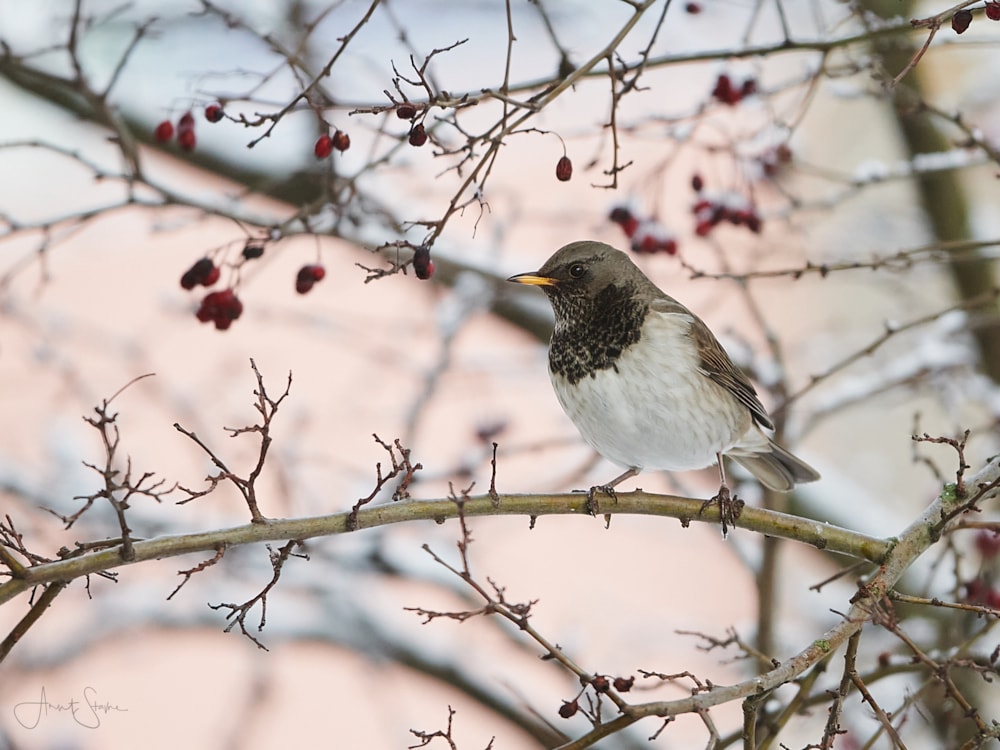 A Brünnich's Guillemot was found moribund and taken into care at Texel, The Netherlands, on 31st. Elsewhere in the country, the Pygmy Cormorant was still at Utrecht on 4th, when the Western Swamphen was reported again from Albasserdam, South Holland, with a Black-winged Kite at Bruchem, Gelderland, on 31st.

The first-winter Ross's Gull was still off the pier at Nieuwpoort, West Flanders, Belgium, on 6th. In France, a Pygmy Cormorant was found in Ain, at Étang du Comté.

A new Sociable Lapwing was south of Puebla de Allcollarin in Extremadura, Spain, from 2-4th, while the birds in Andalucia and Catalonia continued their stays. The House Bunting was still at Fuengirola, Andalucia.

In the Azores, a Wood Duck was on São Miguel on 2nd and a Great Blue Heron was on Pico on 2nd. The Canary Islands boasted Allen's Gallinule, Semipalmated Plover, Hudsonian Whimbrel and House Crow. In the West Bank, a Red-wattled Lapwing was found at Tirza Reservoir on 2nd.