Coinciding with a push of commoner waders through inland areas mid-week was the first decent arrival of Temminck's Stints of the year. Spread between 17 sites along the eastern flank of England and Scotland, high tallies saw four at Druridge Pools, Northumberland, and three at Hickling Broad, Norfolk. Further west, one was at Goldcliff Pools, Gwent. One of the highlights of the week came from the Outer Hebrides, which saw some of the best recorded Long-tailed Skua passage for several years. An impressive count of at least 320 headed northbound past Aird an Runair, North Uist, on 13th, alongside 45 Pomarine Skuas, with smaller counts of both species noted on both 12th and 14th. Away from the Outer Hebrides, an adult Long-tailed Skua again commuted to and from Loch of Clumlie, Mainland Shetland, while others flew past Aberdeenshire, Fife and Highland.

Pomarine Skua passage in the Channel was also excellent, with 31 south-coast locations between Downderry, Cornwall, and Folkestone, Kent, notching up sightings. The largest numbers were noted on 9th, with high totals of 86 past Dungeness NNR, Kent, 82 off Beachy Head, East Sussex, and 52 past Cut Bridge, Hampshire. Small numbers powered into the Solway Firth past Bowness-on-Solway, Cumbria, on two dates too, with odd flypasts noted elsewhere.

Arguably slipping under the radar somewhat was the returning adult American Black Tern at Long Nanny, Northumberland, from 13th. Back at the site for its third summer running, it is the first record of a breeding-plumaged adult in Britain and just the fifth for the wider Western Palearctic. Despite this lengthy stay, however, it took until the very end of its visit last year to be conclusively identified and it hasn't really proved twitchable until now as a result. It can prove a rather tricky identification process to separate from the familiar European subspecies, with the colour of the head and body the first pointers in separating the two taxa. A discussion of the record, as well as the European status and identification pointers of surinamensis can be found here. On the rarity front, a male Blue Rock Thrush at The Naze, Essex, on 12th was the week's undoubted highlight. Although too brief for those further afield than Essex to connect, this county first continues an impressive run of the species nationally in recent years – it is now the third since the incredibly popular wintering bird in Gloucestershire in 2016-17, which was on show for almost four months. Kilnsea, East Yorkshire, traded in last week's Red-backed Shrike for a delightful Brown Shrike on 14th. A species that is very much on the up in a British context, it is the third May record for East Yorkshire in four years, following a male at Great Cowden on 11 May 2019 and a female at Bridlington from 12-14 May 2020. Also from the east was a stunning male Rustic Bunting at Horse Shoe Point, Lincolnshire, on 15th – the county's first spring record since one at neighbouring North Cotes in May 1994. On 13th, a vintage few hours at Gibraltar Point, Lincolnshire, saw at least 122 species recorded and no fewer than three Red-rumped Swallows around. Topping the billing, however, were a southbound Alpine Swift and a male Red-footed Falcon. A day later, this was followed up by two Golden Orioles and yet another Red-rumped Swallow – the site's seventh of the spring.

Red-rumped Swallows enjoyed another bountiful week, with 35 reports split between 15 sites on the east coast of Britain. It was the totals involved that proved most exceptional – Spurn managed best in this regard, with overall numbers this spring ranging from at least five to as many as eight individual birds. Three sites in Orkney – Rerwick Head and Kirkwall on Mainland, and North Ronaldsay – enjoyed sightings. Golden Orioles were well spread along the south and east coasts of England, with nine coastal counties producing sightings. One at Inverbervie, Aberdeenshire, on 14th was Scotland's sole record, while inland birds were reported from Old Basing, Hampshire, and Todmorden, West Yorkshire. Another decent showing of Hoopoes saw birds reported in Scilly, Cornwall, Dorset, Hampshire, Kent, Oxfordshire, North Yorkshire and Isle of Man. A male Red-backed Shrike was a sterling find in the London recording area near Chingford late on 11th, with many appreciative locals connecting before dusk. BAE Warton, Lancashire, saw one reported the same day. A Woodchat Shrike reached Foula, Shetland, with another giving excellent views at Steart WWT, Somerset. Norfolk's mobile Tawny Pipit resurfaced at West Runton for a couple of hours on 11th and an unidentified large pipit species was flushed at Butterwick Low, Lincolnshire, the following day. The Isle of Man produced a female Western Subalpine Warbler, trapped and ringed at Calf of Man on 14th, with Bluethroats on Lundy, Devon, Farne Islands, Northumberland, and Fair Isle, Shetland (the latter a male Red-spotted). A male European Serin flew east over St Catherine's Point, Isle of Wight, on 9th, with the female at Great Saltee Island, Co Wexford, remaining until 10th at least. The island also hosted a Wryneck and Common Rosefinch. In Highland, a singing male Corn Bunting at Embo was a pretty remarkable record – it is the first record for Sutherland since 1972. 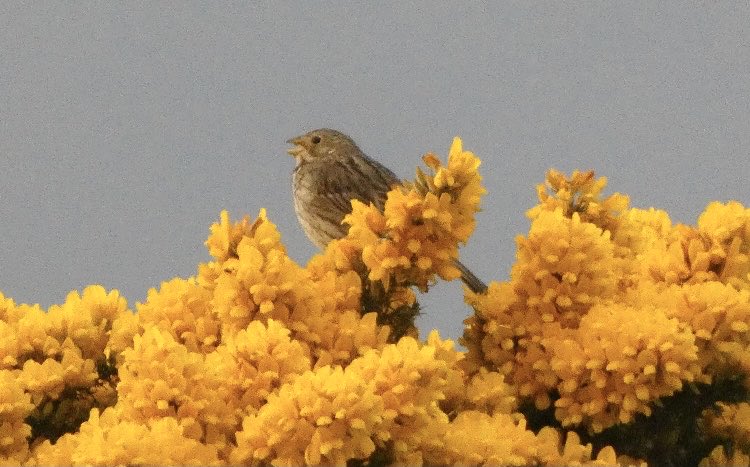 A Shropshire Iberian Chiffchaff – at The Wrekin on 9th – would have undoubtedly proved a popular bird had it lingered more than a couple of hours. Others – one at Regent's Park, London, and a probable at Otterbourne, Hampshire – were altogether better behaved. A brief Savi's Warbler was at Wolla Bank, Lincolnshire, on 12th and Nottinghamshire boasted a Great Reed Warbler at Idle Valley NR on 15th. Norfolk's Dusky Warbler hung on at Stiffkey, with a likely Icterine Warbler singing at nearby Titchwell RSPB on 15th. An early Marsh Warbler was at Thurso, Caithness. With no sign of the St Kilda Snowy Owl in several days, it seems all but certain to be the bird now present at Scolpaig, North Uist, where it remained throughout. A young female Red-footed Falcon – Berkshire's first since 2014 – was enjoyed at Woolhampton GPs from 11th, with a first-summer male at Greylake RSPB, Somerset, on 14th. Black Kite reports included notable records from Beeley Moor, Derbyshire and Saughtree, Borders, with others in Cornwall, Kent, East Sussex, Suffolk and Norfolk. European Honey Buzzards, meanwhile, included a popular individual tracked along the north Norfolk coast on 13th and rare sightings for Lincolnshire, Pembrokeshire, Borders and Fife, while news of one back at Welbeck watchpoint, Nottinghamshire, will be pleasing for year listers. In Argyll, a report of a Little Bittern from Eriskay on 9th was somewhat surprising – it would prove the first county record if confirmed. The week's sole Black-crowned Night Heron report saw one flushed at Woon Gumpus Common, Cornwall, on 10th. In Suffolk, Purple Herons were at Dungeness RSPB, Kent, and both Lound Water Works and Minsmere RSPB, Suffolk. There was once again a glut of Glossy Ibis reports from across England, with another three in Ireland and one in Scotland. The unringed White Stork was back in Cambridgeshire at Smithy Fen on 11th.

A reliable spring Nearctic vagrant, Cumbria hosted a 'spotty' Spotted Sandpiper at Port Carlisle from 11th, with a second individual at Elton Reservoir, Greater Manchester, from 13th. Completing an impressive hat-trick for the North-West, a third was at Doddington Pool, Cheshire, on 14th. Less expected in spring was the Baird's Sandpiper at Balnakeil, Highland, on 15th.

Four sites on the English east coast held Pectoral Sandpipers, with others at Summer Leys, Northamptonshire, Collingham Pits, Nottinghamshire, and Loch of Strathbeg RSPB, Aberdeenshire – this solid showing no great surprise given the bumper autumn for the species in 2021. Up to four Black-winged Stilts continued to commute between Hickling Broad and Potter Heigham Marshes, Norfolk, while three dropped into Langford Lowfields RSPB and Cromwell Quarry, Nottinghamshire, on 15th. Others were in Essex and at Goldcliff Pools, Gwent. An unringed adult drake Hooded Merganser attracted some interest at Abberton Reservoir, Essex, on 11th. The species has always led a contestable life in Britain and Ireland, with a number of proven and suspected escapes accompanying several records accepted as wild. While it isn't always easy to know for sure, the lack of rings and time of year – three of the 15 accepted records to date hail from May – will likely see it secure the benefit of the doubt with the BBRC. The reliable drake King Eider returned to Ythan Estuary, Aberdeenshire, from 11th, with a youngster still off Musselburgh, Lothian. A Surf Scoter was reported off New Tolsta, Lewis, Outer Hebrides, on 13th, while Ring-necked Duck remained at both Dungeness RSPB, Kent, and Blair Drummond, Forth.

The Red-breasted Goose at Blakeney Harbour, Norfolk, might be wise to move on soon; the East Yorkshire Black Brant may have already done so, last reported at Kilnsea on 11th. Two further Red-breasted Geese of unknown origin moved nearly 100 km north-east from Old Hall Marshes RSPB, Essex, to Carlton Marshes, Suffolk, on 15th. After a few more days away early doors, the Black-browed Albatross was back at Bempton Cliffs RSPB, East Yorkshire, by the week's end. White-billed Divers were reported from Brora, Highland, Lewis, Outer Hebrides, and three sites in Shetland, with the Pied-billed Grebe still at Loch Feorlin, Argyll. One of the finds of the week, an adult male Red-tailed Shrike in coastal dunes at Hargen aan Zee, The Netherlands, on 14th was well twitched. A species eagerly awaited in Britain since its recent split from Isabelline Shrike, it is the fifth Dutch record but just the first for spring, following autumn birds in 2000, 2002, 2014 and 2019. Elsewhere, a male Common Rock Thrush was a surreal suburban find on rooftops at Delfzijl on 10th and a pale-morph Booted Eagle flew east over Cadzand-Bad on 12th, with the Western Swamphen and released Bearded Vulture still in situ.

A Sandhill Crane, likely the example present in Germany and Denmark earlier in the year, was photographed near Vanse along Norway's south-west coast on 8th. Finland's Åland Islands boasted a Calandra Lark on Utö on 7th and a lesser short-toed lark species on Jurmo on 12th, with a pale-morph Booted Eagle reported over Helsinki and Hanko.

Sweden's first Least Sandpiper – an adult – was at Harlösa on 14th and Iceland hosted a female Wood Duck at Hvolsvöllur. On 15th, a male Moltoni's Warbler was at Blåvand, Denmark, and an immature Egyptian Vulture flew west over Møn, while last week's French Steppe Eagle moved more than 1,000 km north-east to Skagen on 9th. A northbound Great Northern Diver over Kolka on 10th was just a third for Latvia.

Poland's first Trumpeter Finch was at Wrocanka on 15th. In Germany, a White-tailed Lapwing was along the Iller at Lautrach, Germany, on 10th, with an adult Elegant Tern still on Île de Noirmoutier, France. The Channel Islands scored an Iberian Wagtail of its own this week, with a male at St Ouen's Pond, Jersey, on 12th.

A Basra Reed Warbler was trapped and ringed at Eilat, Israel, on 5th, while Egypt's fourth Pectoral Sandpiper was at Hurghada sewage works.