Westerlies and rain characterised the second week of 2023. While this disrupted the start of a new local big year for many, early January often has a surprise or two in store – and it's a classic time for picking out a decent duck or gull. As it proved, this week produced in both departments, with Powys and Cornwall scoring big.

Inland Wales can often prove quiet from a bird news perspective, but landlocked Powys delivered the goods in style this week, with the first Baikal Teal for Wales at Llangorse Lake from 9th. Accompanying Eurasian Teal, there must be a reasonable possibility that it relates to last year's wintering drake from Staffordshire and Somerset; that bird was first noted at Aqualate Mere on 21 December 2021 before relocating to Greylake RSPB, Somerset, until 14 March 2022. In Cornwall, an apparent near-adult Azores Gull was photographed at Newlyn harbour on 15th, a product of the week's relentless westerlies. Quite the collection of scarce Larids could be enjoyed among the fishing boats – a juvenile Glaucous Gull and first-winter Caspian Gull for starters – although the first-winter American Herring Gull wasn't noted there after 10th. A trio of inaccessible garden passerines undoubtedly led to some gnashing of teeth across Britain. Nottinghamshire's first Black-throated Thrush – a male – was in Newark on Trent, Nottinghamshire, from 9th, while the White-throated Sparrow remained in its favourite garden at Northwich, Cheshire. Rarest of all, however, concerned the belated news of a male Sardinian Warbler in Lancing, West Sussex, between November 2022 and 1 January 2023, the county's first in over 20 years. 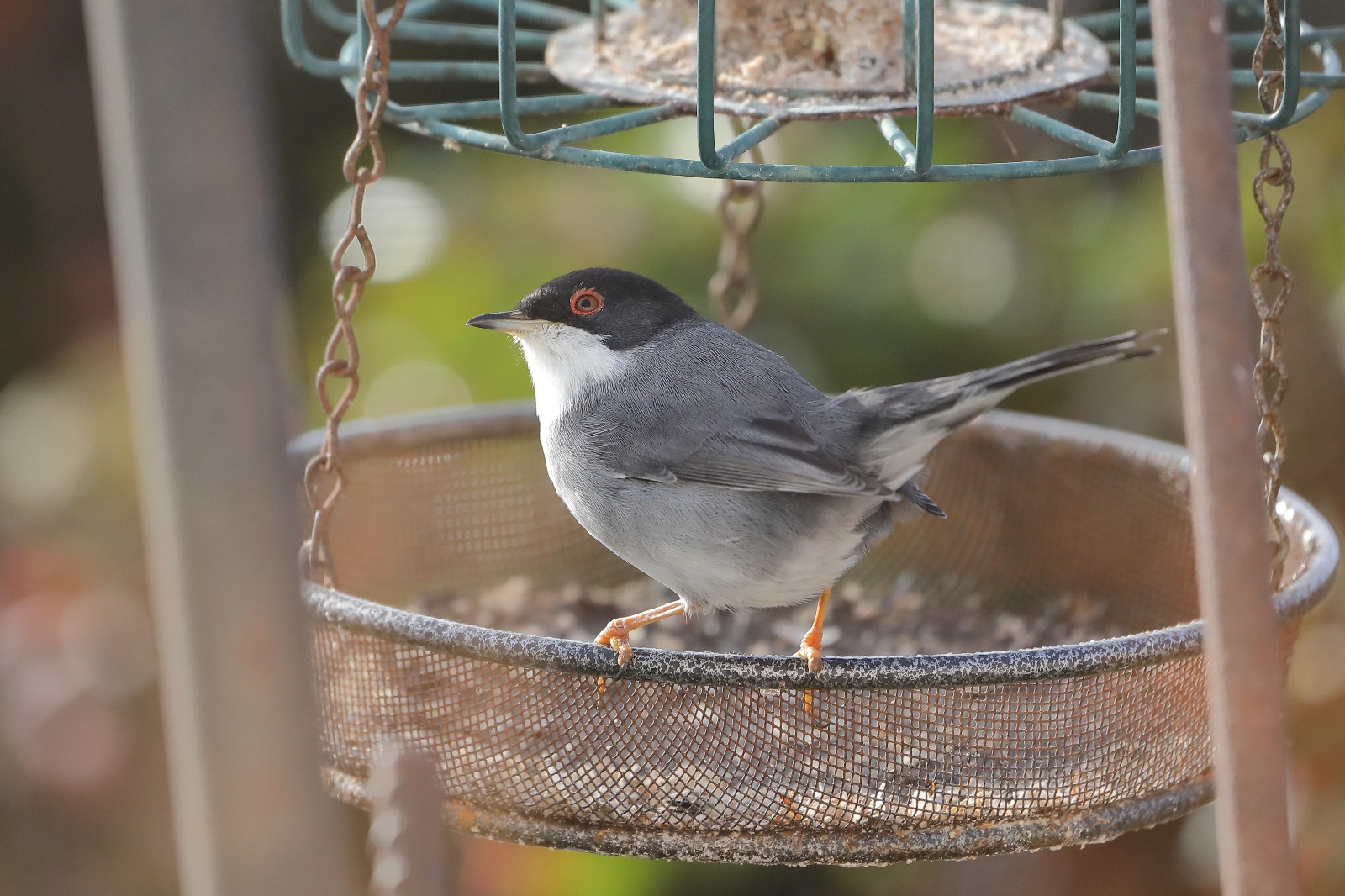 The continuing adult Sabine's Gull at Budds Farm, Hampshire, was perhaps the week's most popular visitor, drawing an admiring crowd on a daily basis to view this gorgeous oceanic species at close range. First-winters were off Severn Beach, Gloucestershire, and Bridges of Ross, Co Clare, while Leach's Storm Petrels were off Gloucestershire and Cornwall. Little Auk sightings included birds in Dorset and Hampshire, and the Double-crested Cormorant remained reliable at Doon Lough, Co Leitrim. Gale force winds battered northern Scotland for much of the week, bringing with them a hoped-for arrival of white-winged gulls. A mammoth minimum of 73 Glaucous Gulls – and probably numbering into three figures – were counted in Shetland at Loch of Cliff, Unst, on 11th. Small numbers of both Glaucous and Iceland Gulls appeared inland too, including Icelands on either side of the Pennines and a popular 'Glauc' in Buckinghamshire. Four Kumlien's Gulls included the regular adult along the Cambridgeshire-Hertfordshire border, one at Tralee, Co Kerry, and juveniles on Tiree, Argyll, and Unst, Shetland. Four Taiga Bean Geese at St Benet's Abbey, Norfolk, were significant and will likely be the only wintering birds in England this year. It has proved a poor showing so far by Tundra Bean Geese too, with only ones and twos reported across Britain this week (in Norfolk, Suffolk, Orkney and Shetland). More notable was a trio in Ireland – two at Lurgan Green, Co Louth, and one at Big Isle, Co Donegal.

Richardson's Cackling Geese were again at both Campbeltown, Argyll, and Balranald RSPB, North Uist, Outer Hebrides, with the former again accompanied by a Todd's Canada Goose. Interestingly, the duo are now content in the company of a flock of feral Canada Geese, demonstrating how vagrant wildfowl happily swap carrier species on occasion.

An impressive four of the week's six Black Brant ringed the coastline of the outer Thames Estuary between Kent and Essex, with the others in East Yorkshire and Hampshire. A Grey-bellied Brant was at Lurgan Green, Co Louth, with Snow Geese at Machrihanish, Argyll (two), Caerlaverock WWT, Dumfries and Galloway, and Ashton's Callows, Co Tipperary. Co Mayo's mega-rare Nearctic duck duo remained for another week – the White-winged Scoter at Tonatanvally, Achill Island, and the Hooded Merganser at Rosduane. The Lothian White-winged remained off Musselburgh too, as did the King Eider at Redcar, Cleveland. Surf Scoter were off Gullane Point, Lothian, and Marloag Point, Co Cork.

Somerset was the beneficiary of a female Lesser Scaup at Ham Wall RSPB from 14th, sharing the site with a surprise midwinter Garganey. Another Lesser Scaup remained in the Outer Hebrides at West Loch Ollay, South Uist, while Ring-necked Duck adorned 21 locations. A drake Ferruginous Duck returned to Ballysaggart Lough, Co Tyrone, for its second winter, with at least two still in the Norfolk Broads. American Wigeon felt marginally less thin on the ground, with six drakes including a new bird at Port Meadow, Oxfordshire. Smew had an altogether decent week too, with birds at 28 sites. A total of 16 Green-winged Teal comprised four in England, five in Scotland and seven in Ireland. A Black-bellied Dipper was an excellent find along the Carrig River on the Wexford outskirts on 14-15th. Three Eurasian Penduline Tits remained at The Gearagh, Co Cork, and Ireland's Arctic Redpoll count doubled, with a new bird at Tarmon, Co Mayo, alongside one at Dunsilly, Co Antrim. In Shetland, a Coues's held on at Baltasound, Unst. Hume's Leaf Warblers lingered at both Brancaster, Norfolk, and Dover, Kent, with a Pallas's Warbler still at Swalecliffe, Kent. New Yellow-browed Warblers were in Buckinghamshire, Dorset and Cornwall, with presumed Siberian Lesser Whitethroats in Durham, Norfolk and Ceredigion. On Unst, Shetland, the young Rough-legged Buzzard made a reappearance near Uyeasound on 11th, while an unconfirmed report was received from East Sussex. The young female Pallid Harrier was again at Warham Greens, Norfolk. A Long-billed Dowitcher dropped into Burton Mere Wetlands RSPB, Cheshire, with Black-tailed Godwits on 11th, although there would be no sign subsequently. Another continued at Cley Marshes, Norfolk, with other lingering rarities comprising a Greater Yellowlegs at Tallow, Co Waterford, and Kentish Plover at Burnham-on-Sea, Somerset. Grey Phalaropes were at seven coastal sites and Glossy Ibises were in Kent, Cambridgeshire, Hampshire and Devon. Midwinter can prove a fruitful period in the Canary Islands, with an abundance of rarities crossing from mainland Africa. Few, however, would have expected a mega-rare visitor from the Nearctic, with an Upland Sandpiper discovered at Muñique, Lanzarote, on 11th, a first record for the archipelago and just the fifth for Spain. Mainland Spain, meanwhile, hosted two Eastern Yellow Wagtails – at Ebro Delta NP and Banyoles – as well as a trio of lingering rarities (a Sociable Lapwing at Corral-Rubio, American Black Duck at Sada, and Brown Booby at Málaga).

The first-winter Baltimore Oriole persisted at Förslöv, Sweden, with the young drake Blue-winged Teal still at Lund and a Black-throated Thrush and Pine Bunting both at Örnsköldsvik. In Norway, an Oriental Turtle Dove at Stavanger and Eastern Black Redstart at Vestbygd both remained.

A plethora of rare delights look set to spend the winter in northern France, including a White-headed Duck at Pont-l'Évêque, Forster's Tern at Plouguerneau, Bonaparte's Gull at La Turballe, and two American Herring Gulls at Gueltas. Elsewhere, the Long-legged Buzzard continued at Thibie, with a Great White Pelican again at Villars-les-Dombes.

Jordan's second Three-banded Plover was a smart find near Amman on 14th, with the Pied Bush Chat still at Ma'or in neighbouring Israel. Kuwaiti birders were surprised by a Long-tailed Duck – the second national record – at Jahra Pools on 7th.