A largely quiet week across Britain and Ireland characterised by cool, westerly winds, it was the Channel Islands that scored the biggest prize – a Bridled Tern in the Common Tern colony at Les Ecrehous, a small islet between Jersey and mainland France, from 9th.  A first for the Channel Islands, this cracking bird remained until the week's end and had south-coast birders on high alert: the last record for south-east England was in East Sussex as long ago as May 1993 and was perhaps the same bird noted in Kent and Essex in 1991. Shetland is never far from the headlines in June, and a bumper few days this week saw a couple of quality new rarities discovered. A smart female Black-headed Bunting at Norwick, Unst, on 7th was followed by a Broad-billed Sandpiper at Grutness, Mainland, the next day – the latter just the fifth for Shetland and the first since 1999, although it was found very late in the day and there was no sign the next morning. Although this year's arrival of Rosy Starlings so far hasn't approached the heady heights of the influxes enjoyed in 2018, 2020 and 2021, the best week of the spring so far for the species produced sightings at 19 sites, with three in Wales, two in Scotland and the remainder in England. The incredibly showy Great Reed Warbler lingered at Langford Lowfields RSPB, Nottinghamshire, for an extra week, with another still at Snettisham Coastal Park, Norfolk, even making an appearance on BBC's Springwatch. It was a better week for Marsh Warblers, with birds in Norfolk, Lincolnshire, Scilly, Gwynedd, Fife, Orkney and Shetland. Singing Blyth's Reed Warblers visited Barra, Outer Hebrides, and Point of Ayre, Isle of Man. A male Grey-headed Wagtail on Inishtrahull, Co Donegal, was a big deal given that there are fewer than 10 sightings of this subspecies on record in Ireland. Another was on Skomer, Pembrokeshire. Red-spotted Bluethroats included two males on a ship off the Lincolnshire coast on 7th and a singing male on Isle of May, Fife, with another Bluethroat on Out Skerries, Shetland.

Argyll's first European Serin was at Lephenstrath on 6th; another was at Landguard, Suffolk, on 10th. A respectable spread of Common Rosefinches comprised birds at five Shetland sites and six elsewhere, including three in Ireland and singles at Flamborough Head, East Yorkshire, Barra, Outer Hebrides, and Calf of Man. Bizarrely, the adult male caught by a cat at Ballycotton, Co Cork, which was rescued, released and then flew into a window and died, was found to have been ringed as an adult on Skokholm, Pembrokeshire, on 29 May 2021. What a strange sequence of events, and one wonders where it has been in the interim. The first-summer male Woodchat Shrike remained at Roxby Moor, North Yorkshire, until 8th at least, with Red-backed Shrikes in Shetland, Fife, East Yorkshire, Lincolnshire and Norfolk. Inland, birds were at both Malton and Burnsall, North Yorkshire. Perhaps best left in the 'unknown origin' records pile, an apparently untagged adult Lanner Falcon headed north-east over Kennington, Kent, on 11th. While a potential wild vagrant to north-west Europe, it is nevertheless a very popular species in falconry circles, making confirming the origins of any individuals in Britain fraught with difficulty.

In Highland, meanwhile, the Short-toed Snake Eagle was again noted in the vicinity of Strath Brora on 7-8th. Black Kite reports were scattered across southern portions of England, with confirmed examples in Cornwall, Devon and Kent. Two Red-footed Falcons were noted in Cornwall – at Nanjizal Valley and Trevellas. A possible male Pallid Harrier reported near Brancaster, Norfolk, on 8th would elude confirmation. 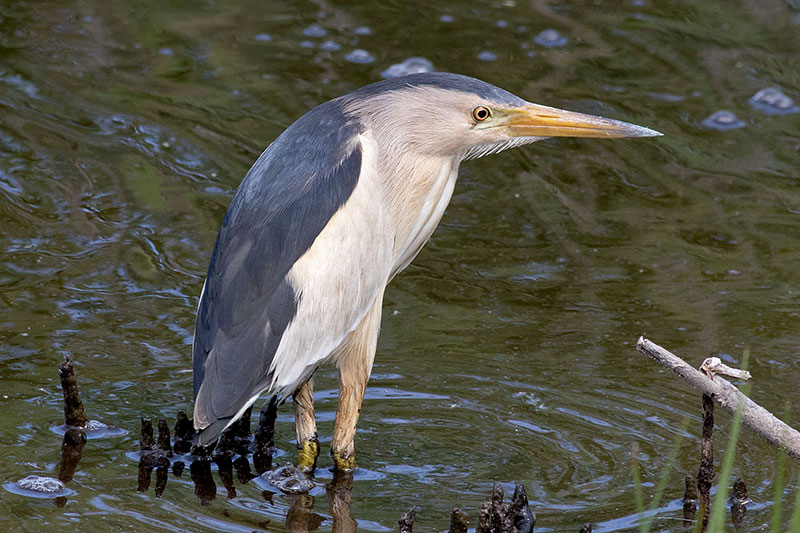 A Corncrake sang in Hampshire at Chilbolton on 7th; a Black Stork flew north-west over Brighton, East Sussex, on 10th.

Just the eighth Spotted Sandpiper for Norfolk was at Titchwell RSPB from 8-11th. It unsurprisingly cut a popular figure, being the first county record since 1994. In Glamorgan, a brief female Kentish Plover at Broughton Bay, Gower, late on 8th is perhaps the recent bird from Kenfig relocating. After being fortuitously photographed by a member of a local photography club on 6th, a Collared Pratincole at Horsey Island, Devon, was thankfully relocated on 10th, where it would remain until the week's end. In Co Wexford, Tacumshin's White-rumped Sandpiper-American Golden Plover double-act remained. A Pectoral Sandpiper was at Druridge Pools, Northumberland, on 8th and Red-necked Phalaropes were in Scilly and Norfolk. On 8-9th, a Temminck's Stint was on Tresco, Scilly.

The American Wigeon count at Lough Beg, Co Antrim, increased to three, comprising a drake and two females. A new drake was at Skinflats Lagoons, Forth, too. In Co Mayo, the drake American Black Duck remained at Cross Lough, Mullet, and a Green-winged Teal was at Loch of Tingwall, Mainland Shetland. The female Ferruginous Duck lasted at Belvide Reservoir, Staffordshire, for another week, although the drake Lesser Scaup was last noted at Marshside RSPB, Lancashire, on 6th. Belated news of a female briefly at Grafham Water on 2nd was also received. A Ring-necked Duck remained at Dungeness RSPB, Kent. Immature King Eider of various ages continued at Musselburgh, Lothian, and Browland, Mainland Shetland. Two new Ring-billed Gulls – both first-summers – were in Ireland, at Annagh Marsh, Co Mayo, and Seabank, Co Louth, with another first-summer still on Benbecula, Outer Hebrides. In Northumberland, the American Black Tern again dazzled all-comers at Long Nanny. A White-winged Tern briefly dropped into Burton Mere Wetlands RSPB, Cheshire, on 6th, with a Gull-billed Tern again at Abbotsbury Swannery, Dorset. Despite being conspicuous by its absence on 11th, the adult male Least Tern was otherwise reliable at Portrane Point, Co Dublin. An early Wilson's Storm Petrel was noted off a Scilly pelagic late on 6th – to put that into context, the earliest on record for the pelagics is 31 May. The Black-browed Albatross again proved largely reliable at Bempton Cliffs RSPB, East Yorkshire, while Long-tailed Skuas flew past Brora, Highland, and Colonsay, Argyll. White-billed Divers were logged off two sites in Shetland and the Pied-billed Grebe remained at Loch Feorlin, Argyll. In Denmark, an immature Bearded Vulture was at Skagen and a Black-browed Albatross flew north past Sylt. White-winged Scoter were at both Storön, Sweden, and Starmýri, Iceland, with a Stejneger's Scoter at Vardø, Norway.

Both White-throated Sparrows – at A Coruña, Spain, and Les Bouchoux, France – remained. Elsewhere in Spain, the country's fourth Black-winged Pratincole was at Gozón, with three Lesser Flamingos again at Laguna de Fuente de Piedra and a Western Reef Heron still at Platja d'Aro.

In the Azores, a Great Blue Heron was at Lajes do Pico, Pico, and two Semipalmated Plovers were at Cabo da Praia, Terceira.

Hungary's second Blue-cheeked Bee-eater was at Tiszaalpár on 6th; a Sabine's Gull at Eilat on 11th was the fourth record for Israel.