It was a brilliant week of migration, with northern England and Scotland enjoying some classic early September fall conditions. Despite this it was Kent that boasted the cream of the crop on the rarity front, with two mega-rare raptors on offer.

The rarest of the two consisted of a Short-toed Snake Eagle logged flying east over South Foreland, Kent, on 11th. A county first, it follows a bumper run of the species in the Near Continent this summer – including no fewer than 20 in The Netherlands – and makes 2022 the first year where multiples have been recorded in Britain. To the glee of a lucky contingent of county listers, it was briefly located near Sandwich later that afternoon. Somewhat amazingly, just a stone's throw away around the same time was a dark-morph Eleonora's Falcon. Equally remarkable, it is the second record for Worth Marsh this year – and perhaps refers to the recent Norfolk individual. 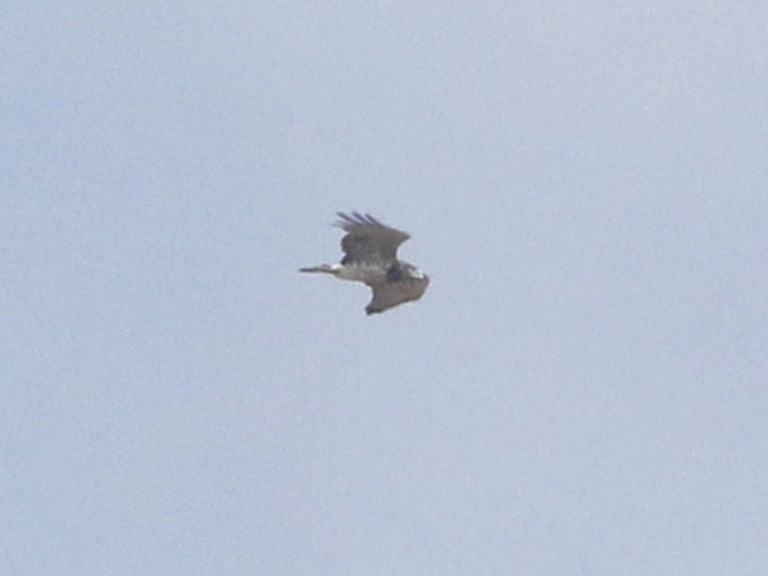 August's seabird extravaganza continued in earnest into September, with a strong shout for a Bulwer's Petrel off Boulmer and Snab Point, Northumberland, on 6th. The species has never been conclusively recorded from British waters, while there is a single accepted Irish record – from Galley Head, Co Cork, on 1 August 2013.

Band-rumped Storm Petrel fever saw birds claimed off no fewer than three Cornish sites – a confirmed individual off Lizard Point on 5th and probables off Pendeen on 8th and Cape Cornwall on 9th. Another tantalising record saw a possible Barolo-type shearwater from the Scillonian III off Land's End on 6th. A Fea's-type petrel made for an amazing garden list addition for one lucky seawatcher off Ventnor, Isle of Wight, on 7th, the same day one flew past Cape Clear, Co Cork.

Exceptional large shearwater counts comprised at least 1,500 each of Great and Cory's Shearwaters past Galley Head, Co Cork, on 7th. A strong showing of Long-tailed Skuas produced 66 reports, with Grey Phalaropes and Sabine's Gulls at 17 and 12 sites apiece. The reliable Bonaparte's Gull at Oare Marshes, Kent, remained and young White-winged Terns dropped in at Burnmouth, Borders, and Longham Lakes, Dorset. Arguably the best early September fall in Shetland in more than two decades produced Pied Flycatchers, Spotted Flycatchers, Common Redstarts across the archipelago alongside a scattering of rarer migrants. A double arrival of Bonelli's warblers on the Mainland on 10th saw individuals at Toab and Quendale – the latter a confirmed Western. Some eight Arctic Warblers was an impressive total (assuming no duplication), as was 17 Wrynecks, 13 Common Rosefinches, five Citrine Wagtails, seven Red-backed Shrikes and several Great Spotted Woodpeckers. Sumburgh, Mainland, boasted a Booted Warbler on 7th, with a Great Snipe on Foula on 9th. Other scarce migrants included Blyth's, Barred, Yellow-browed and Greenish Warblers, two Little Buntings and an unfortunately dead Spotted Crake. Aberdeenshire enjoyed a noticeable fall too, peaking with a delightful adult female Brown Shrike at Bullers of Buchan on 8-9th. Britain's first Yellow-browed Warbler of the autumn was at Fowlsheugh RSPB on 5th, with three Red-backed Shrikes in the county and a Red-breasted Flycatcher at Collieston. Hippolais action comprised two each of Melodious and Icterine Warblers, with five Barred Warblers, two Wrynecks, two Common Rosefinches and a probable Blyth's Reed Warbler adding to the eastern flavour. The highlight of Migfest 2022 saw a second-calendar-year female Pallid Harrier scythe over the showground at Kilnsea, East Yorkshire, on 11th. Other star items in the Spurn recording area during the week comprised no fewer than two Citrine Wagtails (on 10th), Wryneck, Icterine Warbler, three Red-necked Phalaropes (on 5th), Eurasian Stone-curlew, 39 Curlew Sandpipers, Eurasian Dotterel, up to three European Honey Buzzards and several Long-tailed Skuas, although the area's rarest visitor was a brief Yellow-winged Darter dragonfly at Kilnsea Wetlands on 5th. Shetland aside, Arctic Warblers were on Tory Island, Co Donegal, Barra, Outer Hebrides, and Papa Westray, Orkney. A Greenish was on Tory Island too, with nine along the east coast. Noteworthy Barred Warblers were on Bardsey Island, Gwynedd, and Great Saltee, Co Wexford, with a female subalpine warbler at Barns Ness, Lothian. Ringers at Stanford Reservoir, Northamptonshire, were treated to a Blyth's Reed Warbler on 8th, while a Melodious Warbler was at Porthgwarra, Cornwall. Surprisingly, the summering male White-spotted Bluethroat at Slimbridge WWT, Gloucestershire, resurfaced from 5th after a near two-month absence. Other Bluethroats were at Farlington Marshes, Hampshire, and Isle of Noss, Shetland. A rare Argyll Citrine Wagtail record saw one at Knock, Mull, with singletons at Walmsley Sanctuary, Cornwall, Treso, Scilly, and Cape Clear, Co Cork. Grey-headed Wagtails, meanwhile, were at Llanelli Wetland Centre WWT, Carmarthen, and both Unst and Fair Isle, Shetland. Ortolan Buntings were split between Scilly, Dorset, and Shetland (two), with a European Serin in a St Germans, Cornwall, garden. A Red-backed Shrike at Rutland Water, Leicestershire & Rutland, headed up a hefty 71 reports. More than 200 Wryneck sightings made the BirdGuides news page, with Common Rosefinch and Red-breasted Flycatcher reported 36 and 13 times respectively.

First photographed last weekend, a juvenile European Roller at Bere Ferrers, Devon, was relocated on the village outskirts from 8th. In Suffolk, a surprise eight European Bee-eaters – perhaps some of the Norfolk breeders – flew south over Minsmere RSPB on 9th. Up to three were in Dorset and a Golden Oriole was on North Ronaldsay, Orkney. A wide spread of Hoopoe reports consisted of four in England and one in Scotland; new Rosy Starlings – all juveniles – were in Norfolk, Surrey and Dorset, with one still in Ayrshire. Juvenile Red-footed Falcons continued to arrive, with one wandering the Norfolk coast near Horsey from 5-8th and another over Mablethorpe, Lincolnshire, on 5th. In Lancashire, a probable was photographed over Longton Marsh, Lancashire, on 6th and one remained at Marton Mere throughout. A strange wader at Dunnet Bay, Caithness, provided some head-scratching mid-week. Initially reported as a Baird's Sandpiper and later as a Temminck's Stint, general opinion later settled on a hybrid Calidris. The bird showed some Dunlin features, although others – such as general structure, dark legs and strange scapulars and coverts – didn't fit that species either, making a Dunlin × Temminck's Stint a potential best fit. A Baird's remained on Tresco, Scilly, with five Temminck's including a notable Irish example at Ballycotton, Co Cork.

A poor quality video of yesterday's interesting wader on Dunnet beach that is not a Baird's sandpiper and doesn't look quite right for a juv Temminck's stint @CaithnessBirds @BirdGuides pic.twitter.com/Z5wHs8m5q9 Another good week for Eurasian Dotterel sightings included seven over Cleeve Hill, Gloucestershire, and four at Great Orme, Conwy. Pectoral Sandpipers were widely distributed: birds at 32 sites provided plenty of interest. Elsewhere, a Lesser Yellowlegs lingered at Dundalk, Co Louth, and Red-necked Phalaropes were at 10 locations. The strong autumn for Curlew Sandpiper continued, with at least 83 at Frampton Marsh RSPB, Lincolnshire, on 8th. Little Stints were also seen in good numbers, with a clear arrival in the northern half of Britain especially. Blithfield Reservoir, Staffordshire, scored a Corncrake on 9th, with Spotted Crakes at nine sites. New Purple Herons were in Cornwall, Kent, Suffolk and East Yorkshire, while popular birds continued at Willington Wetlands, Derbyshire, and Stodmarsh NNR, Kent. The unringed White Stork was back at Stanway Green, Essex, on 10th. 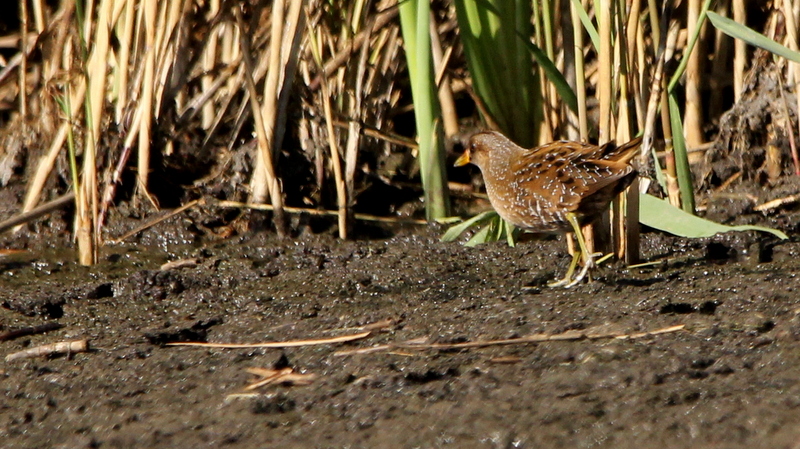 The strong summer showing of Eleonora's Falcons in North-West Europe continued, with a pale morph at Bentwoud, The Netherlands, on 8th. In the far north of France, a different pale morph resided at Trunvel, Finistère, from 4-6th. France's best bird, however, concerned a Paddyfield Warbler trapped and ringed at Les Boulins on 7th, while the adult Bridled Tern flew past L'Aiguillon-sur-Mer, Vendée. 'L'Hexagone' got in on the Sharp-tailed Sandpiper action with one at Barbâtre; others continued in Germany at Berga and in Norway at Vigrestad.

The second South Polar Skua for Estaca de Bares, Spain, in as many weeks flew past on 7th. An Elegant Tern was at Tarifa and the Baird's Sandpiper remained at Praia de Traba. A Black Scoter flew south past at Simrishamn, Sweden, with a migrating Common Scoter flock on 6th, while the Norwegian Sandhill Crane and Icelandic Squacco Heron both lingered. A Long-billed Dowitcher was at Höfn, Iceland, with an adult Sabine's Gull along the Hungarian portion of the Danube at Nagymaros on 9th.