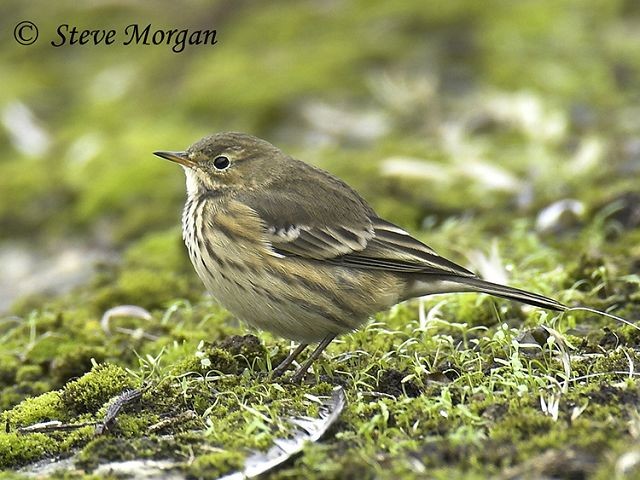 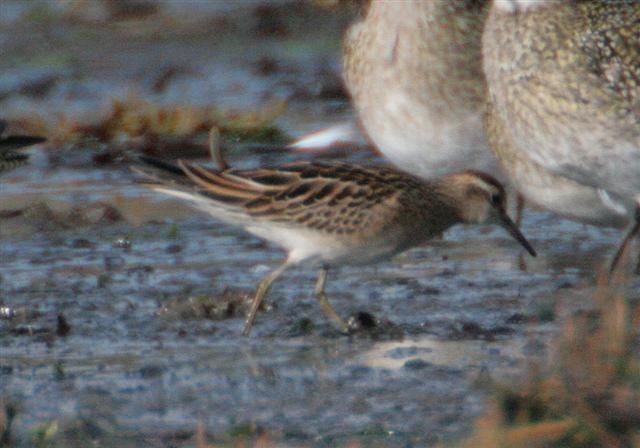 Following on from late September's Siberian Thrush, the island of Foula in the Shetlands continued its purple patch, with a male Siberian Rubythroat on Friday 5th and a mouth-watering supporting cast that included Pechora Pipit, Blyth's Reed Warbler, Lanceolated Warbler, Olive-backed Pipit, Bluethroat, Common Rosefinch and 6 Yellow-browed Warblers. A further small influx of Buff-bellied Pipits was a notable feature of the week, with two birds in Co. Cork and singles in Co. Clare and Oxfordshire, county firsts in all cases. The bird on Fair Isle was last reported on Sunday 7th. The highlight for "Scilly season" birders was a Blackpoll Warbler that arrived on St. Mary's (Scilly) on Tuesday 9th, with another possible on St. Agnes the same day, though a late report of a Cliff Swallow on St. Mary's on Wednesday 3rd will have raised pulse-rates - sadly, no further sightings were confirmed. An unidentified American wood warbler (Dendroica sp.) was reported from Kergord on Shetland on Saturday 6th, but was not relocated. Staying with North American vagrants, a juvenile American Black Tern arrived at Tacumshin (Co. Wexford) on Friday 5th but was not seen on subsequent days. A juvenile Sharp-tailed Sandpiper at Ballycotton (Co. Cork) from Thursday 4th until the following day and a possible Lesser Kestrel at Polgigga (Cornwall) on Friday 5th completed the roll-call of new "megas" for this week. The Killdeer remained at Pool of Virkie (Shetland) to Wednesday 10th at least, but the Brown Flycatcher at Flamborough Head (E. Yorks) was not seen after Thursday 4th. 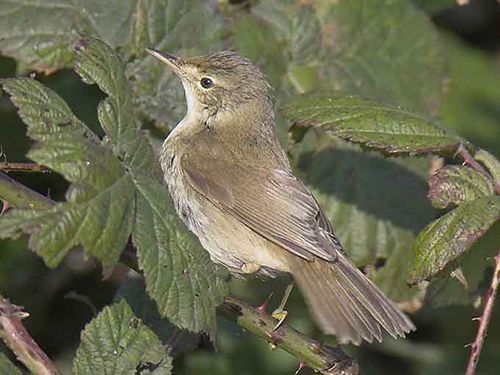 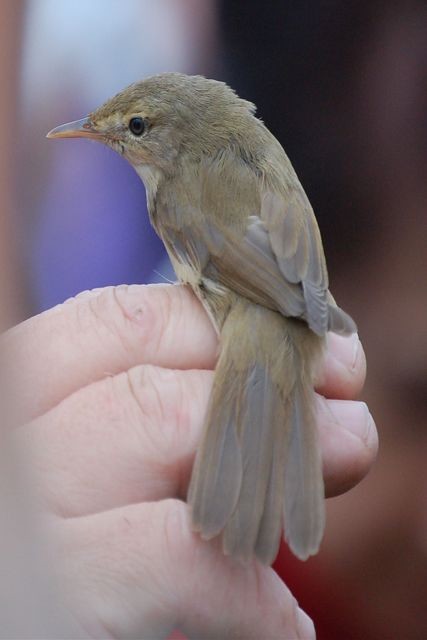 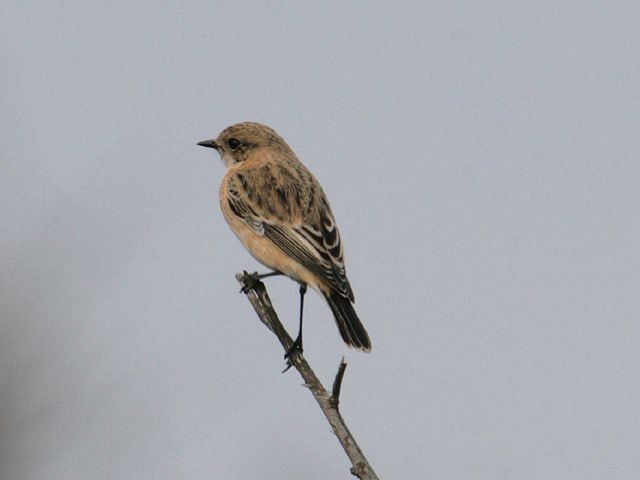 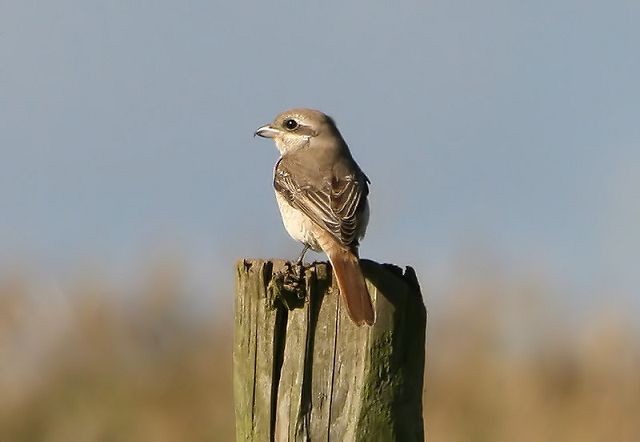 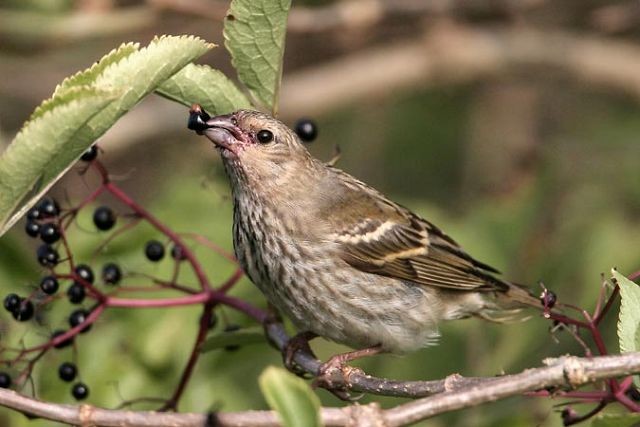 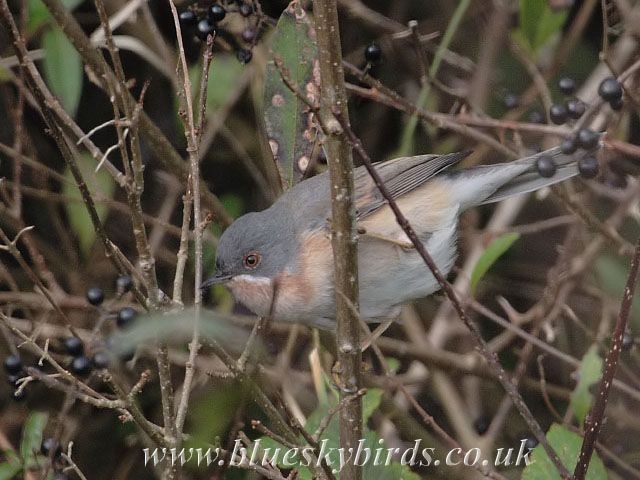 Other rare passerines included up to four Olive-backed Pipits on Shetland, Paddyfield Warblers at Quendale (Shetland) and Pannel Valley nature reserve (E. Sussex), and Blyth's Reed Warblers at Flamborough Head and Spurn (E. Yorks), Red Rocks (Cheshire) and the London Wetland Centre. An Arctic Warbler was at Symbister on Whalsay (Shetland) on Tuesday 9th, and a Hume's Leaf Warbler was at Holkham Pines (Norfolk) from Sunday 6th till Wednesday 10th at least. The Siberian Stonechat at Spurn was seen until Sunday 6th but was not located the following day, and the Swainson's Thrush on Fetlar (Shetland) was not reported after Thursday 4th. The well-photographed Isabelline Shrike, of the race phoenicuroides ("Turkestan Shrike"), remained at Buckton (E. Yorks) until Friday 5th, and the 1st-winter Lesser Grey Shrike was last reported from Holkham (Norfolk) on Monday 8th having been present for nearly a week. Both Red-backed Shrikes and Great Grey Shrikes were reported in number, and a Woodchat Shrike on St. Mary's (Scilly) was still present at the time of writing. Hoopoes were seen at Cliffe (Kent) on 7th and Redruth (Cornwall) on 10th but neither apparently lingered. A handful of Wrynecks were seen in the southwest, with one in Oundle (Northants) gardens from 5th-8th. Short-toed Larks were at Toab (Shetland) and on Fair Isle and a Citrine Wagtail was at Symbister, Whalsay (Shetland) from 5th-8th. Richard's Pipits reached double figures but a bird at Grimley New Workings (Worcs) on 7th was the only inland record; Red-throated Pipits were reported from Norfolk and Fair Isle. Bluethroats continued their poor autumn showing with birds at Filey (E. Yorks) and on the Farne Islands (Northumberland) and two on Fair Isle. Only two Melodious Warblers were reported, both in the Shetlands. A Dusky Warbler at Netherfield Lagoons (Notts) on 7th and 8th was a notable inland record, and others were at Easington (E. Yorks) and Porthgwarra (Cornwall). Radde's Warblers were reported from eastern counties: at Donna Nook (Lincs) on 4th-5th, Holme (Norfolk) on 5th-6th, and The Naze (Essex) on 7th-8th. Yellow-browed Warblers and Barred Warblers were widespread, and Greenish Warblers were reported from London, Scilly and Norfolk. The Moltoni's Subalpine Warbler at Burnham Overy (Norfolk) was not seen after 5th. Around a dozen Red-breasted Flycatchers were reported, all at coastal locations. The only Ortolan reported was at the Calf of Man Bird Observatory on or around the 7th, but at least 9 Little Buntings were reported along the east coast between Suffolk and Shetland. A Serin was at Pendeen (Cornwall) briefly, around 9 Common Rosefinches included a well-watched and photographed individual at Warham Greens (Norfolk) from 7th, and Arctic Redpolls were on Unst and Whalsay (Shetland), the latter identified as belonging to the Nearctic race hornemanni. 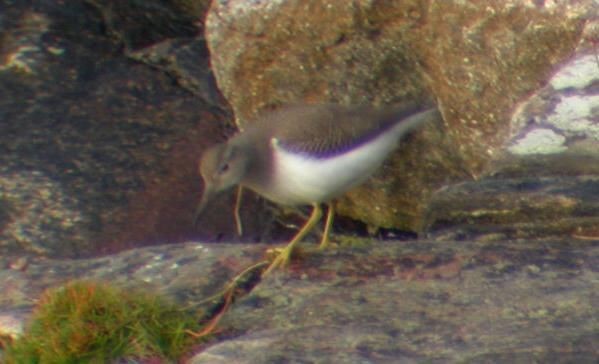 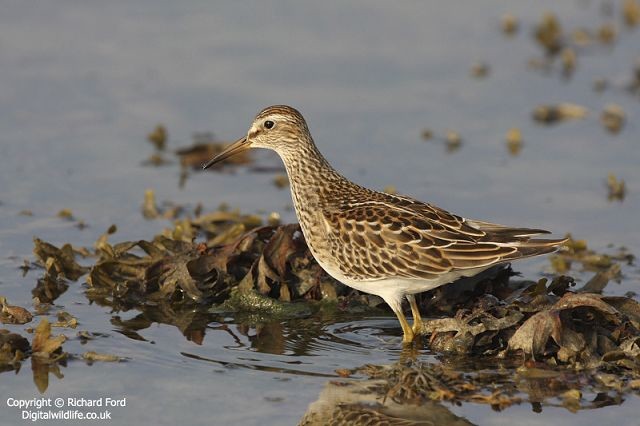 In addition to the Sharp-tailed Sandpiper in Co. Cork, newly arrived waders included a juvenile Semipalmated Sandpiper at Ballycotton (also Co. Cork) from 4th-5th, Long-billed Dowitchers in Kent and Londonderry, a Lesser Yellowlegs at Shapinsay (Orkney) on 6th-7th and a probable Pratincole sp. at Hapton (Norfolk) on Saturday 6th. Turning to long-stayers, the Spotted Sandpiper on Unst (Shetland) from late September was seen again on Thursday 4th and the juvenile bird at Burravoe on Yell; also in Shetland, remained at the time of writing. A "probable" Spotted Sandpiper, possibly the bird seen at Porth Hellick Pool to 27th September, was reported from Porthcressa Bay on St. Mary's (Scilly) on Wednesday 10th. In addition to the new birds in Kent and Londonderry, Long-billed Dowitchers were still at Shannon Airport (Co. Clare) and Branston Fen (Lincs) during the week, and the juvenile Baird's Sandpiper was still at Tacumshin (Wexford) to at least Thursday 4th. American Golden Plovers were reported from Tiree (Argyll), Fleck, Fetlar and West Burra (Shetland), and Aberlady Bay (Aberdeenshire), and a 'probable' was reported on Bryher (Scilly). A Kentish Plover was at Dawlish Warren (Devon) on Thursday 4th. Red-necked Phalaropes were at Kelling Water Meadows and Cley (Norfolk), and at Freiston Shore (Lincs), during the week, and Grey Phalaropes were widely reported, with birds seen in Co. Donegal, Cornwall, Devon, Leicestershire, Lincolnshire, North Yorkshire, South Yorkshire, Scilly, Shetland, Somerset and Warwickshire. A Temminck's Stint was at Titchwell (Norfolk) on 4th/5th and another was reported "in recent days" from Loch Swilly (Donegal) on Wednesday 10th. A White-rumped Sandpiper was at Lurgan Green (Louth) on Sunday 7th. Around thirteen Pectoral Sandpipers were at large at widely scattered sites from Scilly to Orkney and Buff-breasted Sandpiper reports were received from Cornwall, Cleveland, Shetland, Argyll and Co. Wexford.

In a quiet week for raptors, the long-staying Black Kite was again present at Nocton Heath (Lincs) to Wednesday 10th at least; Rough-legged Buzzard sightings came from Norfolk, Northumberland, Fife and Lincolnshire, while Honey Buzzard sightings were widely scattered from Cambridgeshire, Guernsey, South Yorkshire and West Sussex. An unidentified vulture of unknown origin, possible a White-backed or White-rumped Vulture, was seen and photographed at several sites on the Isle of Wight. 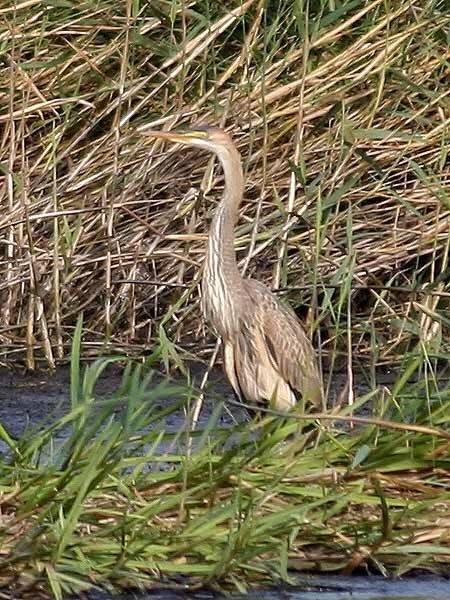 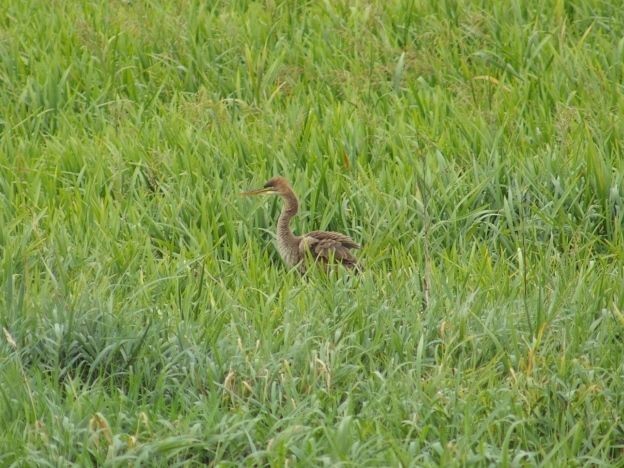 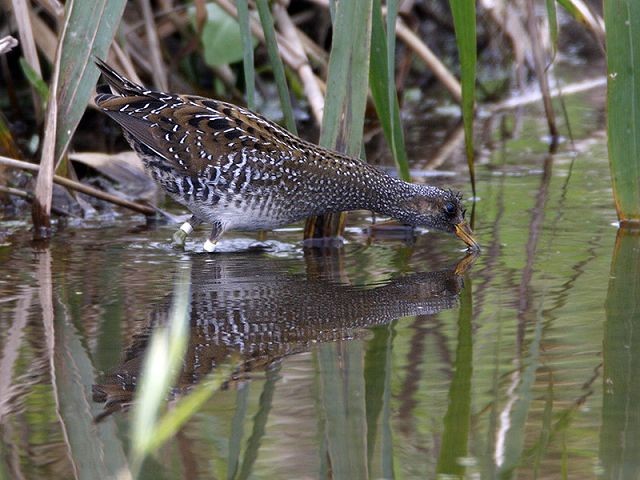 Cambridgeshire boasted two juvenile Purple Herons (one on the Nene Washes at Eldernell and another on the Ouse Washes) but the bird on the Somerset Levels has not been reported since Tuesday 9th; another flew over Chertsey (Surrey) on Thursday 4th. New Great White Egret sightings included birds in Cheshire, Dorset, Lincolnshire, Louth, South Yorkshire, Staffordshire and Wiltshire, plus two or three in Norfolk and a possible in Kent, and several long-stayers were still present. The Night Heron was still at Gibraltar Point (Lincs) on Tuesday 9th and good numbers of Spoonbills were reported, mostly from southwestern coasts. Spotted Crake sightings continue to be had at Marazion (Cornwall) and Great Bustards from the reintroduction scheme were seen at two sites in Somerset during the week. The Glossy Ibis in Lancashire continued to be reported from Marshside RSPB, but the Cattle Egret west of Thurso (Highland) was last reported on Thursday 4th. Common Cranes were sighted in Hampshire, Kent and Norfolk. 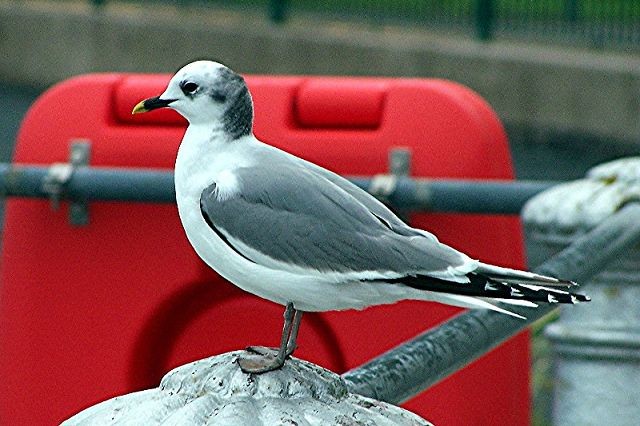 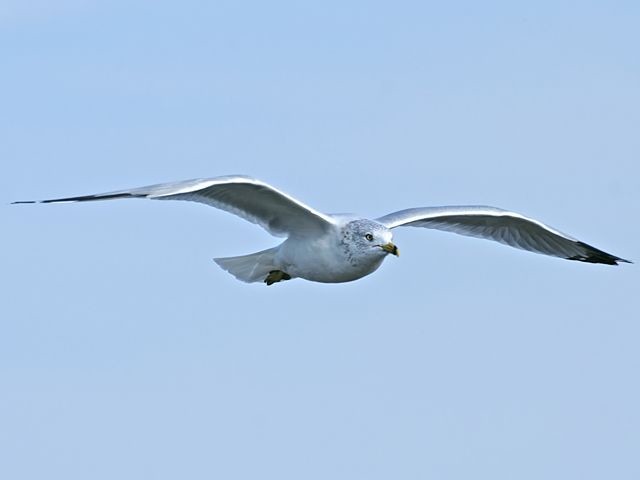 Sea-watchers had a fairly thin time of it, though the Seawatch SW team reported a number of Balearic Shearwaters past Porthgwarra (Cornwall) and Pomarine Skuas were seen off Allhallows-on-Sea (Kent) and Carlingnose Point (Fife). Three Sabine's Gulls at Beddington Sewage Farm (London) were notable on 9th, with another inland bird at Chew Valley Lake (Somerset) the same day. Ring-billed Gulls were seen in Lancashire, Essex and Londonderry and a Laughing Gull at Exmouth (Devon) on Saturday 6th was presumably the bird that has frequented the area for much of the year.

A reported Lesser Scaup at Loompit Lake (Suffolk) was later reidentified as a Scaup, but the birds at Blagdon Lake (Somerset) and St. John's Loch (Highland) remain. The Marbled Duck of unknown origin was still in Normanston Park, Lowestoft (Suffolk) to Monday 8th at least. A Lesser Canada Goose was found in the Kirkgate roost on Loch Leven (Perth/Kinross) on 7th and Snow Geese were in Norfolk, Nottinghamshire, Argyll and Aberdeenshire, with a Black Brant at Wells-next-the-Sea (Norfolk). A drake American Wigeon was at Ynys-Hir (Ceredigion) on Wednesday 10th, and Ring-necked Ducks were reported from Shetland, Lincolnshire, and Scilly. The eclipse drake King Eider on Shetland has now been present for at least a month, and a total of 4 Surf Scoters were present off Orkney and Fife. Green-winged Teal were reported from Inner Marsh Farm (Cheshire) and Loch Gruinart RSPB on Islay. A White-billed Diver, possibly present for around 10 days, was found off Selsey Bill (W. Sussex) on Tuesday 9th and was still being reported at the time of writing, though distant at times. 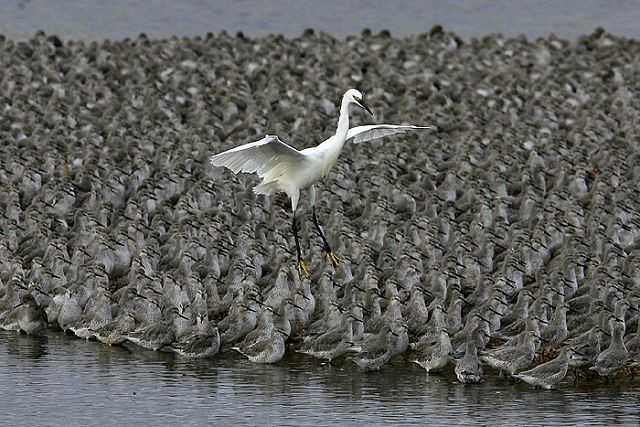 As well as being one of nature's magnificent spectacles, massed waders can also make for great photos. One of the aesthetic factors that makes images more artistic is 'pattern' (alongside line, shape, texture, colour, etc.), but this is hardly ever seen in bird photos. Even when it is, the photos often lack a point of interest. Stuart's shot of hundreds of Knot with their heads and bills aligned is a good example of pattern, but what a focal point! As a photographer in that situation, you just couldn't hope for a better opportunity, or respond better when it arose. 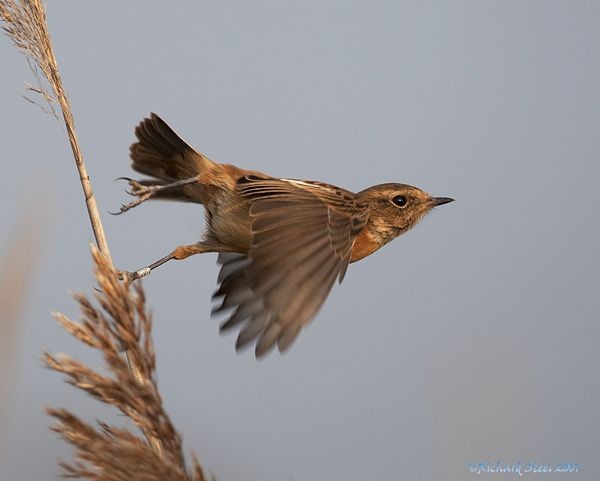 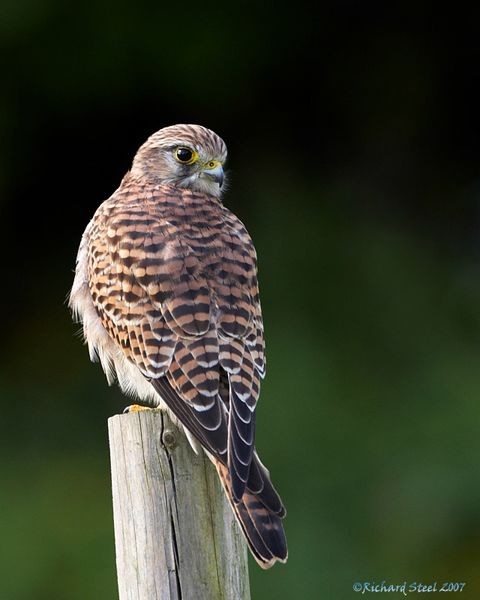 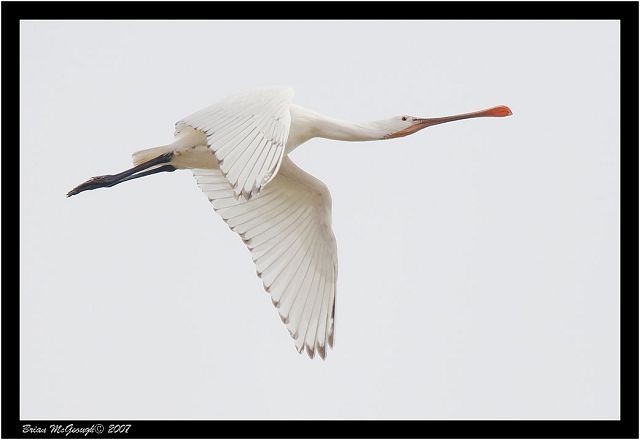 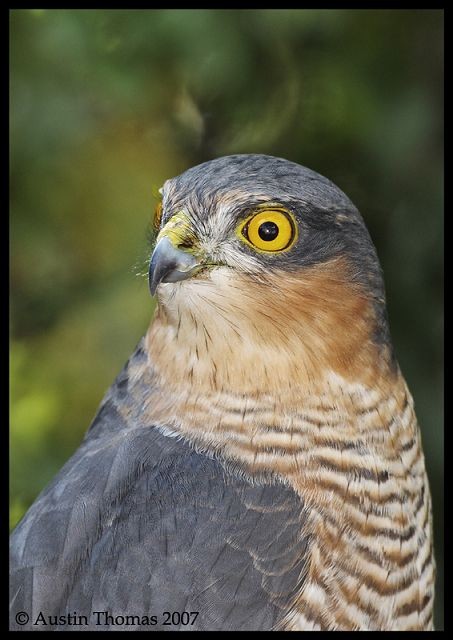 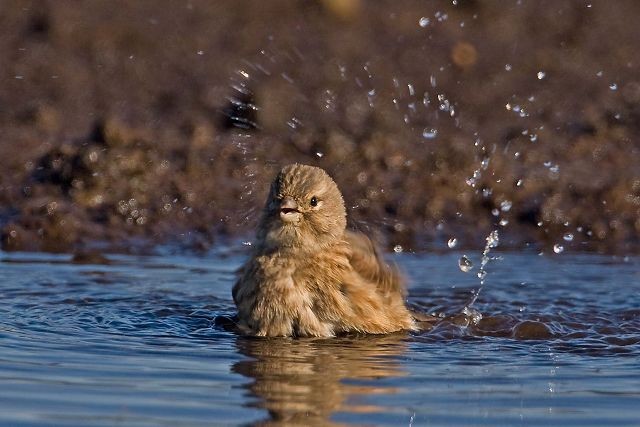 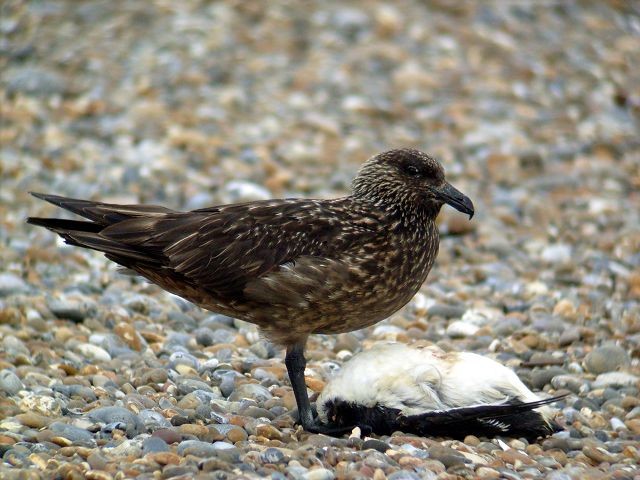 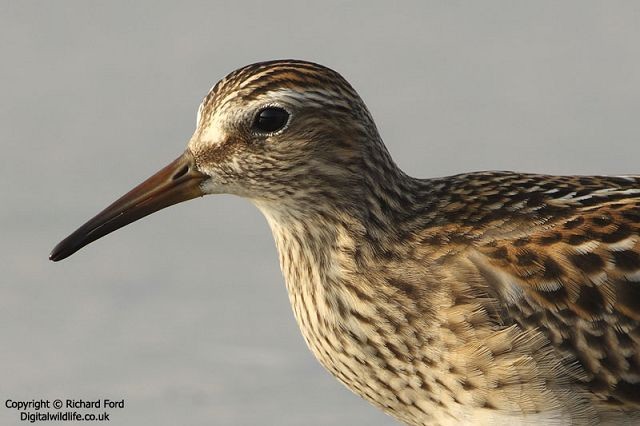 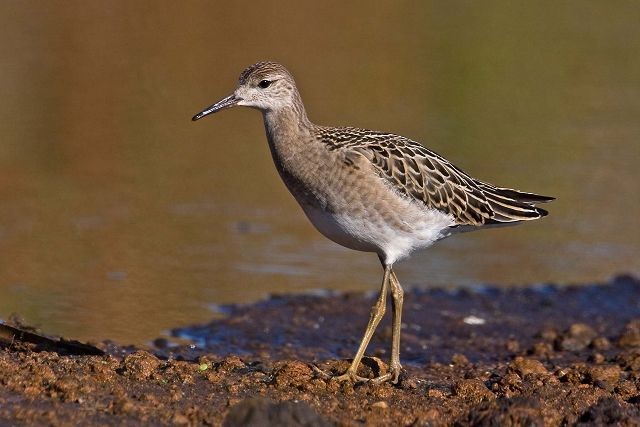 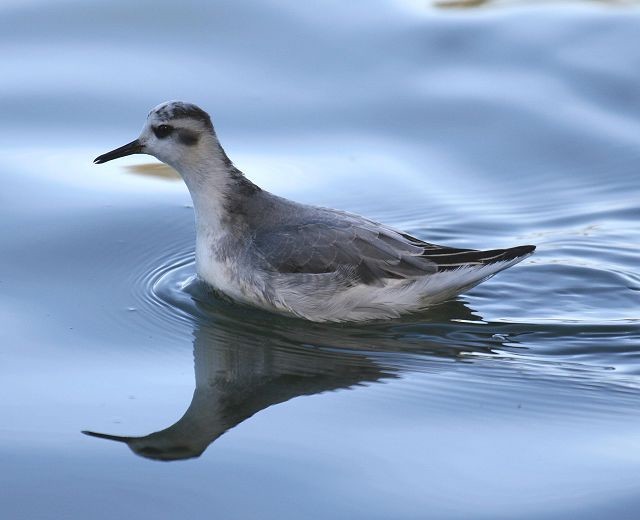