Although it was a largely settled midsummer week where lingering rarities held centre stage in Britain, it was a somewhat more exciting state of play in Ireland, where the summer's latest mega was found.

An adult Elegant Tern was located in the Sandwich Tern colony at Lady's Island Lake, Co Wexford, from 3rd. The species enjoys a long history in the country, with six previous records dating back some 40 years. It isn't even the first for Lady's Island Lake – it is preceded by an adult in July 1999. As fate would have it, it turned up almost exactly a year to the day of an Elegant Tern in the Sandwich Tern colony at Cemlyn Bay, Anglesey, which appeared on 4 July and went on to tour England's north-west coast throughout August – might it be the same bird resurfacing in a different colony, perhaps? Adding to a veritable Irish tern fest were the returning Forster's Tern at Inishroo, Co Galway, on 9th and the Least Tern again at Portrane Point, Co Dublin, over the weekend. An extraordinary double header at nearby Tacumshin, Co Wexford, from 6th saw an adult Pacific Golden Plover join the lingering American Golden Plover, providing stunning views of this sometimes-tricky species pair in their most attractive of plumages. 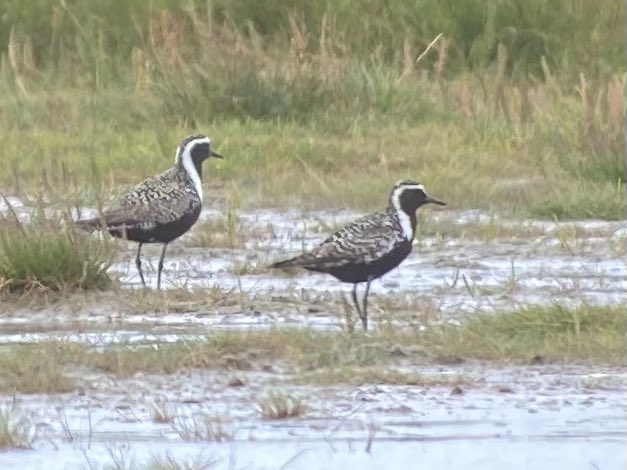 Elsewhere in Ireland, chastening belated news emerged of a male Eastern Black-eared Wheatear at Cliffs of Moher, Co Clare, on 16 June. This likely Irish second is the first anywhere in either Britain or Ireland since a one-day adult male at Acres Down, Hampshire, on 13 June 2015.

In Kent, the adult Bonaparte's Gull returned to Oare Marshes for its ninth summer from 7th, where it could be seen sharing the same lagoon with a first-summer Black-crowned Night Heron found the previous evening. Other Bonaparte's were at Firemore, Highland, on 5th and on the River Tyne at Dunston, Durham, on 7th. Bempton retained its two megas throughout the week, to the pleasure of many who made the trip to the East Yorkshire coast. The Red-tailed Shrike spent most of its time slightly inland of the reserve, while the Black-browed Albatross put in exciting performances from the Yorkshire Belle on two dates. All three of the week's Cory's Shearwaters were in the North Sea – one tracked along the North Norfolk coast between Cley Marshes and Sheringham, another off Wolla Bank, Lincolnshire, and a probable off Howick, Northumberland. A Wilson's Storm Petrel was logged from a pelagic off Rossaveel, Co Galway, on 5th, with another off Scilly the previous day. Leighton Moss RSPB, Lancashire, was treated to a summer-plumaged adult Sabine's Gull from 5th. A Caspian Tern commuted between Potter Heigham Marshes and Hickling Broad, Norfolk, from 5th, with one at Botany Marshes RSPB, Suffolk, on 10th. Another heading north past Flamborough Head, East Yorkshire, on 8th perhaps related to the northbound probable past Long Nanny, Northumberland, on 10th. The American Black Tern at Long Nanny began to show signs of moult; St Martin's, Scilly, boasted a brief summer-plumaged Laughing Gull on 10th. The summer's first juvenile Caspian Gull was at Cromer on the evening of 8th; this may well be the earliest juvenile ever to reach UK shores. The summer's first White-rumped Sandpiper was a high-tide fixture at Snettisham RSPB, Norfolk, on a daily basis from 7th. The Broad-billed Sandpiper continued to commute between Grutness and Pool of Virkie, Mainland Shetland, while a Kentish Plover was reported at Knockadoon Head, Co Cork, on 5th. Pectoral Sandpipers were at Clogheen Marsh, Co Cork, and Tiree, Argyll. Belated news of a Black-crowned Night Heron noted at Bintree Mill, Norfolk, on 27 June perhaps refers to the adult logged at Cley Marshes on 6th and 8th. Another adult was at Waltham Brooks, West Sussex, on 4th. Three Glossy Ibises appeared in Orkney on Rousay and Papa Westray (two) on 5th, with the species widespread in England. In Cambridgeshire, the unringed White Stork lingered at Smithy Fen; a brief Corncrake was near Wymondham, Norfolk, on 5th. Up to eight European Bee-eaters remained at Trimingham, Norfolk, with birds noted over Wells Woods, Norfolk, Kingsdown, Kent, and both Felixstowe and Shottisham, Suffolk. Rosy Starlings were split between Llangwyryfon, Ceredigion, Bettyhill, Highland, Kilmaluag, Skye, and Holm, Mainland Orkney; a brief Hoopoe was reported at Willen Lake, Buckinghamshire, on 8th. An eclectic tern fest in the Camargue, France, at Grau de Piémanson this week saw no fewer than four Elegant Terns and a Lesser Crested Tern present among large numbers of loafing Sandwich Terns. Another Lesser Crested Tern was in Spain at Ebro Delta NP on 30 June. A mobile White-tailed Lapwing rocked up at Ewiges Meer, Germany, on 2nd before moving 400 km further east to Holzendorfer Seebruch on 4-5th. A Greater Sand Plover appeared at Uttershausen from 7th, while The Netherlands held a released Bearded Vulture.