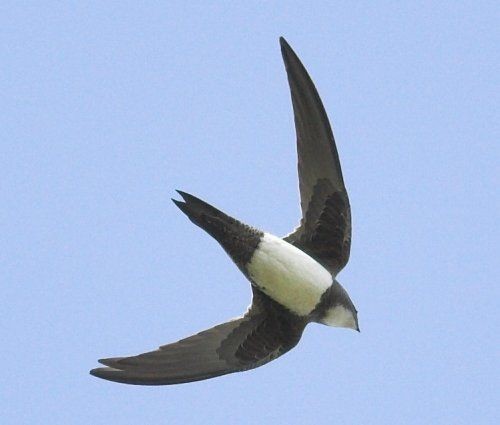 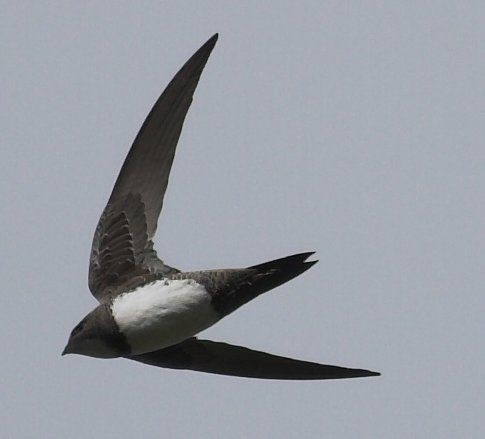 The main feature of the week was a multiple arrival of Alpine Swifts. Typically highly mobile, it is difficult to establish how many birds were involved, but parties of three were well-watched in East Anglia and Devon, and singletons noted at a number of other sites. In East Anglia, up to three birds were present at Minsmere on 3rd. In Norfolk, birds were seen at Winterton, Norwich and Whitlingham CP, and in Suffolk they were seen at Lowestoft, Benacre and Minsmere. Elsewhere, one at Stewartby Lake (Beds) on 1st was a county first, one was at Rye (E. Sussex) on 2nd and a probable at Chichester (W. Sussex) on 2nd. In the Southwest, one was at Falmouth (Cornwall) on 30th and a possible over Truro (Cornwall) on 5th, whilst up to three were present at Seaton/Colyford (Devon) from 1st. One at Filey (N. Yorks) on 2nd was probably the same bird at Flamborough Head (E. Yorks) on 3rd. In Northern Ireland, one was at Whitehouse Lagoon (Co. Antrim) on 2nd, and in the Republic, singles were at North Slob (Co. Wexford) and Dungarvan (Co. Waterford) on 3rd and Lissagriffin and Mizen Head (Co. Cork) on 5th.

A Black-winged Stilt on the Plym Estuary (Devon) from 1st onwards was a welcome opportunity for year-listers; this species is tricky nowadays, following the demise of 'Sammy' the long time Norfolk resident and one-time standard 'padder' on the Norfolk weekend! A Long-billed Dowitcher at Old Hall Marshes (Essex) from 31st-3rd was presumably the bird from last autumn making a reappearance, whilst the long-staying individual remained on the Hayle Estuary (Cornwall). A Buff-breasted Sandpiper was reported from Walland Marsh (Kent) on 2nd and a Kentish Plover was at Dawlish Warren (Devon) on 3rd.

The two Penduline Tits remained at Portrack Marsh (Cleveland) to 31st, with one from 1st-3rd and again on 5th. Possibly the same two males delivered the first record for Co. Durham to Drinkfield Marsh LNR on 4th. More expected, in terms of region, was a male Penduline Tit at New Hythe GPs (Kent) on 4th. An Arctic Redpoll was present briefly at Cowbar (Cleveland) on 30th, a Northern long-tailed Tit was at Waxham (Norfolk) on 2nd and the Easington bird relocated the sort distance to Kilnsea (E. Yorks) on 5th. 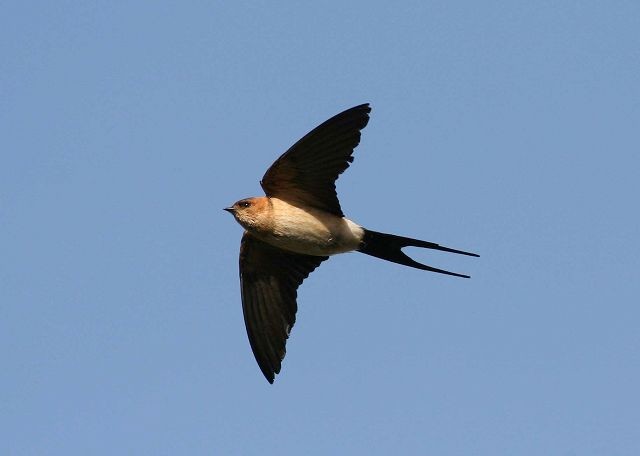 
A Red-rumped Swallow was at Kenidjack (Cornwall) from 2nd and another was at Ditchling Common CP (E. Sussex) on 4th. A small arrival of Hoopoes was evident along the south coast, with singles at: Polgigga (Cornwall) on 31st, Ferrybridge (Dorset) on 1st, Tregeseal (Cornwall) on 1st, Eastbourne (E. Sussex) from 2nd-4th, Sandown (Isle of Wight) from 3rd-4th, Maiden Castle (Dorset) on 5th, plus the bird from mid-March was still present at Novohal Cove (Co. Cork). Single Serins were at Waxham (Norfolk) on 3rd and Portland (Dorset) on 4th, and the Black-bellied Dipper remained on Fair Isle (Shetland) to 31st. The lone Shore Lark continued its residency at Minsmere (Suffolk) and six passed over Great Yarmouth (Norfolk). Three single Lapland Buntings was a poor showing and just over 150 Waxwings remained in several well-scattered flocks. Ten Great Grey Shrikes were mostly to be found in southern counties, and a decent scatter of Firecrests were found at east, and south, coast watchpoints. 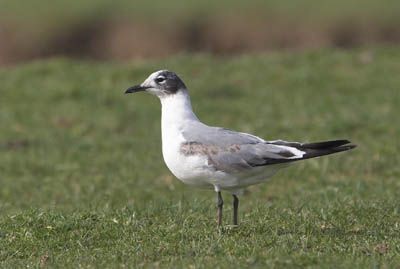 The 1st-winter Franklin's Gull was present at the Skern, Northam Burrows CP (Devon) through the week and a 1st-winter was at Kilcoole (Co. Wicklow) from 30th-1st. Five Laughing Gulls included an adult at Ballydehob (Co. Cork) on 2nd-3rd, plus long-stayers at Cork City (Co. Cork), Glaslyn Marshes (Gwynedd), Barnstaple (Devon) and the reappearance of the adult at Campbeltown (Argyll). Gull interest elsewhere was limited; the 3rd-winter American Herring Gull was still at Nimmo's Pier (Co. Galway) as was the possible 2nd-winter at Sennen Cove (Cornwall), but just nine Ring-billed Gulls were reported. The adult Forster's Tern remained at Nimmo's Pier and three White-billed Divers were off Port Skigersta, Lewis (Outer Hebrides). 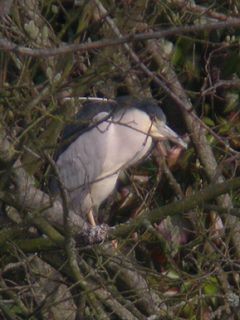 
Left-overs from the recent Night Heron influx continue to be found. A dead bird was found on St. Martin's (Scilly) on 30th and another was seen on St. Mary's (Scilly) on 1st, with others at St. Erth (Cornwall) on 3rd, Bowling Green Marshes (Devon) on 4th and Ruan Lanihorne (Cornwall) the same day. A Purple Heron was at Marazion (Cornwall) on 4th and a White Stork over Folkestone (Kent) on 1st. Half-a-dozen Spoonbills was a poor showing compared with recent weeks. The Cattle Egret remained to at least the 1st at Worton (Wilts), as did the party of eight at Piddinghoe (E. Sussex), whilst another was at Dunster Beach (Somerset) on 5th. The Great Bustard from the reintroduction scheme was on Westbury Moor (Somerset). The Spotted Crake remained at Parkgate (Cheshire) to 2nd, Corncrakes were at Donna Nook (Lincs) on 1st and Nanjizal (Cornwall) on 4th and an early Quail was at Frampton Marsh (Lincs) from 4th-5th.


A drake King Eider flew past Fair Isle (Shetland) on 30th, one was at Rattray Head (Aberdeens) on 1st, one at Dales Voe (Shetland) on 2nd and a cracking drake at Barassie (Ayrshire) from 2nd onwards. The drake Barrow's Goldeneye remained at Quoile Pondage (Co. Down). Lingering Lesser Scaup were still to be found at Ballysaggart Lough (Co. Tyrone), College Reservoir (Cornwall) and Milton Loch (Dumfries and Galloway), a whopping 18 Ring-necked Ducks were reported, though there may have been some duplication between sites, though the sole Surf Scoter was off Harris (Outer Hebrides) and two probable drake Northern Eider were off Lewis (Outer Hebrides). Five American Wigeon included new birds at Connah's Quay (Clwyd) on 31st and Wicken Fen (Cambs) on 5th, plus long-staying birds Lewis (Outer Hebs), Needingworth Quarries (Cambs) and Exminster Marshes (Devon). In contrast, just five Green-winged Teal were reported. The only Black Brant was at Morston (Norfolk) on 2nd, and a Snow Goose was at Errol (Perth and Kinross) on 31st, with another passing over Coll (Argyll) on 3rd. 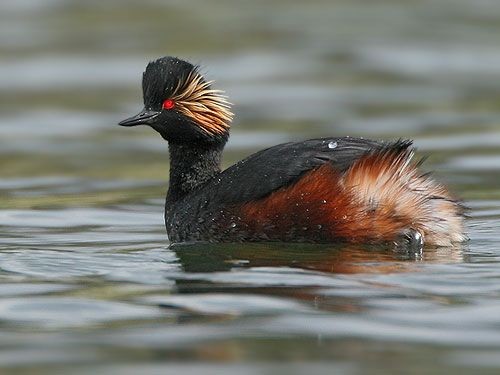 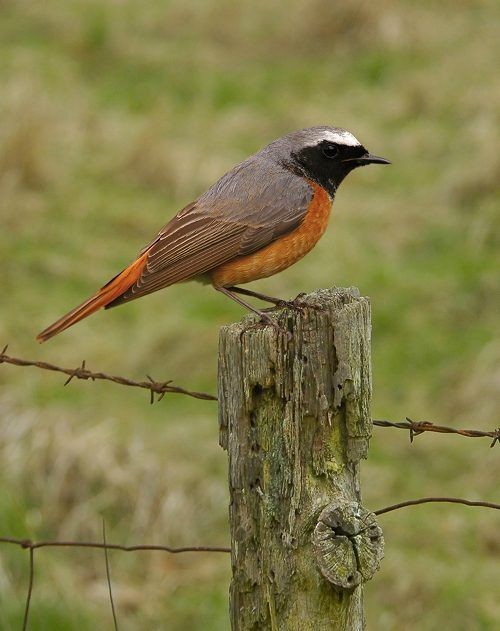