For many birders, the dawn of a New Year heralds the beginning of a new year list. South-West England provided quite the head start in this regard, with a number of quality rarities on offer in the region.

Devon in particular proved the place to be, with a second-winter Laughing Gull commuting between Beesands and Slapton from 4th. A short distance away, Colyford Common hosted a remarkable double act, with both an Isabelline Wheatear and Eastern Yellow Wagtail providing some excellent views along the boardwalk throughout the week. Cornwall too enjoyed a good run. The first winter American Herring Gull provided some excellent views at Newlyn on 5-6th, but it was the discovery of a Black-browed Albatross heading north-west past St Ives on 5th that took the limelight. Notably, photographs of the albatross look to show signs of immaturity, particularly a dark, greyish bill and a darker underwing than that shown by an adult bird. Evidently, this would make it different to at least two birds seen in Britain during 2022 – the famous adult at Bempton Cliffs RSPB, East Yorkshire, and one off Unst, Shetland – meaning no fewer than three Black-browed Albatrosses currently roam the north-east Atlantic Ocean.

All of Ireland's major rarities remained settled for another week – the immature White-winged Scoter and adult drake Hooded Merganser in Co Mayo, and the Double-crested Cormorant at Doon Lough, Co Leitrim. All three Eurasian Penduline Tits were present and correct at The Gearagh, Co Cork, too, as was the Arctic Redpoll at Dunsilly, Co Antrim. The latter proved a bit of a headscratcher at times, with some photos suggesting it looked within range for Hornemann's and others a better match for Coues's. The pair aren't always identifiable and many birds overlap, the first-winter bird's bulky, front-heavy appearance certainly raised suspicions of a Hornemann's among observers. In addition, the bird shows a deep-based bill (Coues's typically appear finer and more petite) and a frosty mantle, as well as looking noticeably larger and broader than the attendant Lesser Redpolls. While it may not look as tan-coloured as some might expect of a 'classic' Hornemann's, a study of reference photographs will show that fading of the buff face is relatively expected at this time of year. Elsewhere, a confirmed Coues's was in Shetland at Baltasound, Unst. 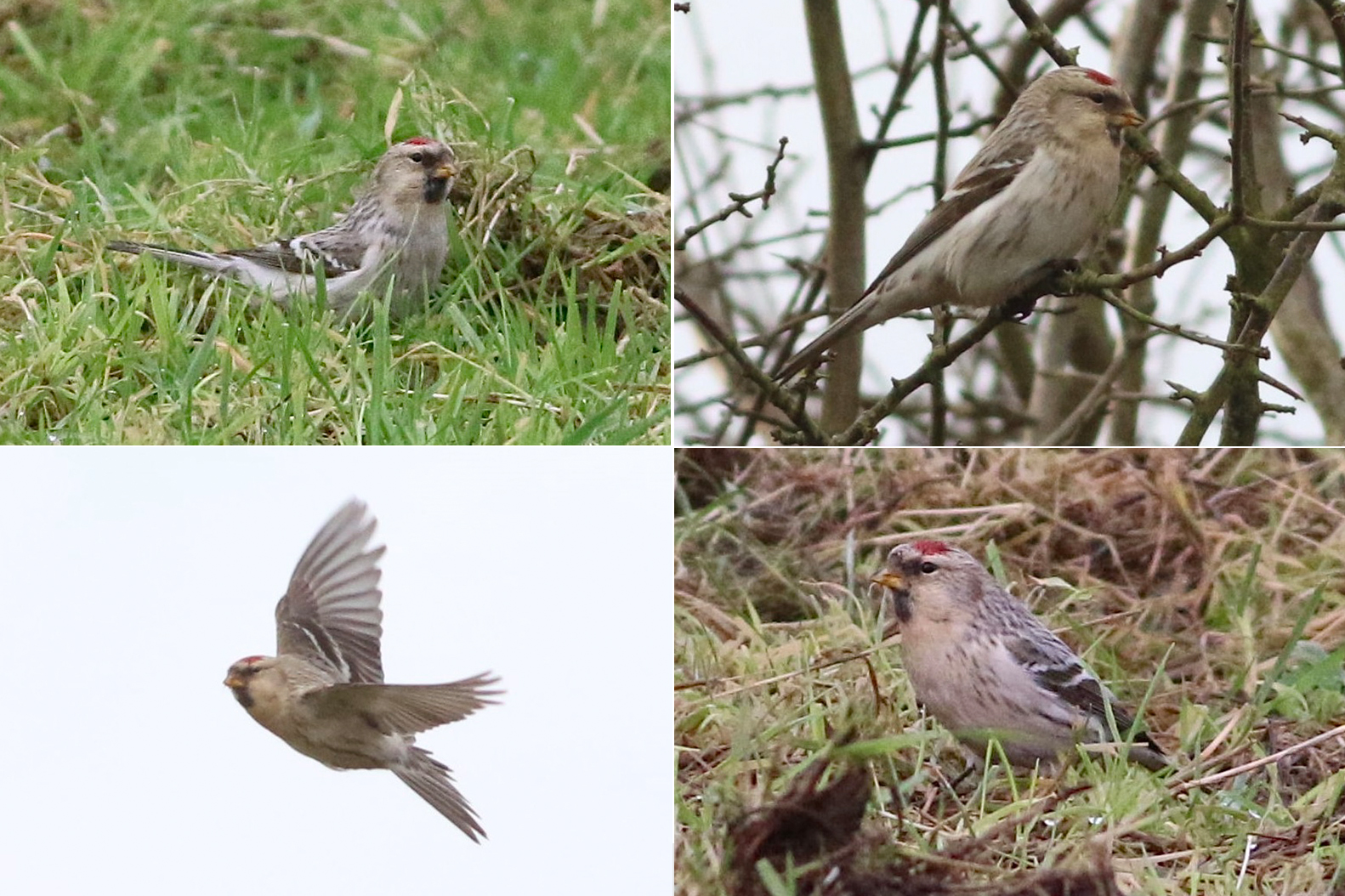 After a near seven-week absence, the regular adult drake White-winged Scoter was back off Musselburgh, Lothian, where it proved relatively settled. Four sites hosted Surf Scoter this week, with birds in Conwy, Lothian, Argyll and Co Cork. Northumberland's Black Scoter resurfaced off Holy Island, Northumberland, on 8th, King Eider remained in both Cleveland and Shetland, and White-billed Divers at two sites in Shetland. In Argyll, the Red-breasted Goose was again with Barnacle Geese at Loch Gruinart RSPB, Islay. The only Richardson's Cackling Goose record of the week hailed from the island too, at Lyrabus on 3rd. Across the Irish Sea, at least five Grey-bellied Brant were again in suburban areas of Dublin. The white-morph adult Snow Goose at Drymen, Clyde, remained reliable, while a blue morph was reported from Ashton's Callows, Co Tipperary. Small numbers of Tundra Bean Geese were in eastern areas of England and Scotland, with one reaching Co Donegal at Magheramore. Although currently treated as a subspecies of Common Chiffchaff by the IOC, Siberian Chiffchaff looks destined for species status in the future. After a couple of boom years numbers appear to have rebounded to more typical levels. Birds were at only 16 sites, with half of those in Cornwall. Kent's New Year got off to a welcome start with a Pallas's Warbler at Swalecliffe. Elsewhere, Hume's Leaf Warblers remained at both Brancaster, Norfolk, and Dover, Kent, a Siberian Lesser Whitethroat was again in gardens at Llechryd, Ceredigion, and five Yellow-browed Warblers were recorded. Although not in the numbers many had hoped for, Waxwings nevertheless maintained popularity. Eight sites in England saw sightings, with birds at five Scottish sites. Great Grey Shrikes held on at Hothfield, Kent, and Pig Bush, Hampshire, with both a Little Bunting at Cot Valley, Cornwall, and Rosy Starling at Wiveliscombe, Somerset, continuing. It remained a poor winter Shore Lark showing, with only 20 birds recorded this week. A hefty 17 of these were split between three sites in Norfolk, with the remainder divided between Beacon Ponds, East Yorkshire (two), and Ross Back Sands, Northumberland. The Orcadian Rough-legged Buzzard was noted at Loch of Brockan, Mainland, with one reported over the shrike site at Hothfield, Kent, on 5th. In Norfolk, the young female Pallid Harrier continued at Warham Greens. Proving even more popular in Norfolk was a daytime-roosting Long-eared Owl behind CleySpy at Glandford, with an attendant line of birders raising over £855 for Oriental Bird Club in the process. Waterford's Greater Yellowlegs could be added to the 2023 totaliser, reappearing at Tallow from 6th. The Long-billed Dowitcher was still at Cley Marshes, Norfolk, with Grey Phalaropes at eight coastal sites. Glossy Ibis were in six counties – Devon, Hampshire, Kent, Suffolk, Cambridgeshire and Co Wexford. Brief first-winter Bonaparte's Gull at St Combs, Aberdeenshire, on 7th. The Co Antrim adult remained, while Ring-billed Gulls were in six counties, including a new bird at Cuskinny Marsh, Co Cork. Both Glaucous and Iceland Gulls appear to have finally arrived in some numbers, with both at 30 sites apiece. Cambridgeshire's returning adult Kumlien's Gull was back at Melbourn on 8th, with another adult again at Tralee, Co Kerry, and a juvenile still at Uyeasound, Unst. The celebrity Walrus, nicknamed 'Thor', would seemingly bid adieu this week, swimming off from its chosen pontoon at Blyth, Northumberland, early on 3rd.

Was expecting to look at geese this afternoon, not watch a Walrus with an itchy nose 😍 #Thor #Blyth pic.twitter.com/oXSuvkC5R3

New Year's Day delivered a bombshell when a juvenile Dwarf Bittern was unfortunately hit by a car and taken into care at Guéthary, Pyrénées-Atlantiques. This remarkable first for France follows a phenomenal run of Subsaharan vagrants to the Western Palearctic this winter, although is the first Dwarf Bittern to be recorded in the region since 2020 – and is the 12th overall. Elsewhere in France, the state of play looked much the same as in recent weeks – the Forster's Tern at Le Curnic, first-winter American Herring Gull at Gueltas, White-headed Duck at Pont-l'Évêque, and Long-legged Buzzard at Thibie all remained.

The run of rare Afrotropical rallids continued in earnest, with two Allen's Gallinules photographed – an adult at Foce Polcevera, Italy, on 5th and a juvenile at Tangier, Morocco. In Eilat, Israel, the African Crake was back at IBRCE on 8th, while a young male Pied Bush Chat was unearthed at Ma'or from 5th. Málaga, Spain, hosted a Brown Booby, with a multitude of rarities still present elsewhere – an American Black Duck at Sada, American Herring Gull at Muxía, and Sociable Lapwing at Ebro Delta. In the Azores, a Pied-billed Grebe was still at Gruta do Natal, Terceira.

An adult male Black-throated Thrush graced at Rinkabyholm, Sweden, with the Baltimore Oriole still at Förslöv and a Blue-winged Teal again at Lund. A female Hooded Merganser persisted at Randers, Denmark, and an adult drake White-winged Scoter was off Reykjavík, Iceland.

Malta's first Bonaparte's Gull – a first-winter – was a smart find at Salina NR on 3rd. In Belgium, a Pygmy Cormorant was at Leuven and a male [Pine Bunting]] lingered at Leefdaal.