Some of the hottest days of the year heralded the start of another Weekly Review period. But by the weekend the weather had become rather more typical of an English summer, as sunshine and showers began to predominate and cooler conditions took charge. As the week came to a close, a decidedly (whisper it) autumnal feel was felt across some counties as northwesterly winds and rain lowered the temperatures further still. However all that lost summer heat could have been turned up a little more had the most charismatic bird reported this week managed to have appeared within the same timeframe but, sadly, one of the "most wanted" species on the British List had been and gone before anyone knew a thing about it. 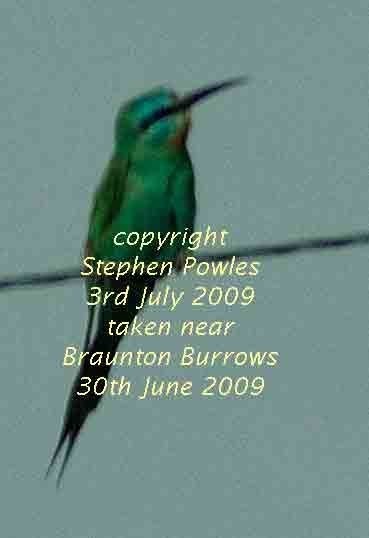 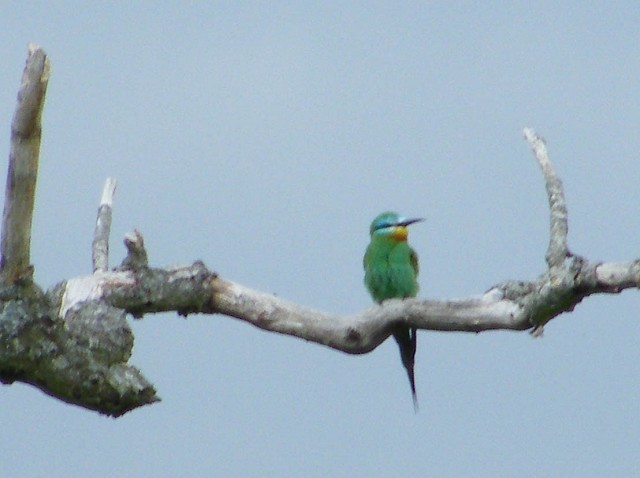 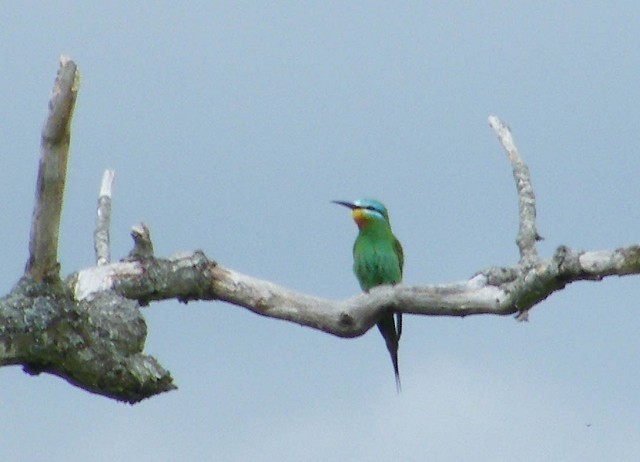 First up in the tale of woe was news of a Blue-cheeked Bee-eater seen and photographed near Braunton Burrows (Devon) on 30th June. The news filtered slowly out on 3rd and searches yielded nothing. Eventually a photograph appeared and the story (the bird seen by a non-birder, the photo sent to a friend who eventually forwarded the image to the BTO) was fully corroborated. Then, incredibly, the day after news of the bird in Devon had made the heart flutter, came news of a Blue-cheeked Bee-eater in Hampshire! That bird (presumably just one was involved) was photographed around the Needs Ore Point area on 21st June, where it was present for around some 15 minutes (although reports of a "Bee-eater" in the area a couple of days later may well have been this bird). This will be Britain's ninth record of this most dazzling vagrant (and a county first). Once the Devon bird is accepted, it will be the second record for the county, following the infamous bird around the Otter Estuary in June and July 1987. It is now 20 years since the fabled and much-twitched bird at Cowden in East Yorkshire (that bird relocating to Lincolnshire), and 1989 also saw Blue-cheeked Bee-eaters appear in Cornwall and Kent. The most recent record came from Shetland in June and July 1997. Indeed, just one record out of the eight accepted so far have been outside the middle two months of the year — the odd one out was seen in Cambridgeshire in September 1982.

Comfortably the rarest bird of this week was the Scopoli's Shearwater seen six miles south of St. Mary's (Scilly) on 4th. If accepted, this will be the second British record of this subtle Mediterranean breeding bird which is given specific status by many authors, but is currently regarded only as a subspecies (diomedea) by the BOURC. The first was also seen in Scillonian waters, on 2nd August 2004, and was well photographed by pelagic picture specialist Bryan Thomas. The 2009 bird wasn't photographed, but birders are again on alert for this slimmer, "white-fingered" version of Cory's Shearwater (borealis). Way, way to the north of Scilly, the scenic surrounds of Applecross (Highland) continued to draw observers to enjoy some super views of the singing male River Warbler, which remained to 8th. In County Wexford, the adult Stilt Sandpiper seen around Tacumshin towards the end of June reappeared at The Cull on 3rd, but quickly departed eastwards and hasn't been seen since. On Guernsey, the two Zitting Cisticolas continued to summer at Port Soif and were seen to 5th at least. 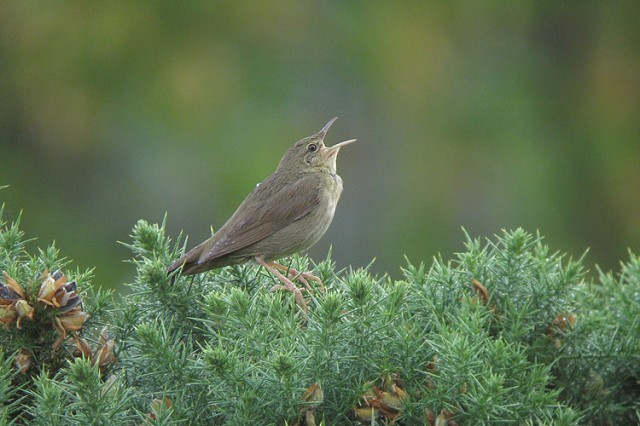 The first Wilson's Storm-petrel of the Scilly pelagic season was seen some 11 km southeast of St. Mary's on the evening of 7th. In Ireland, 37 Cory's Shearwaters flew west past Galley Head (Co. Cork) on 3rd and these were followed by a further 53 the following day. Also in Cork, on 4th, three Cory's Shearwaters were seen from the Old Head of Kinsale and seven were seen from Ballycotton. One or two were seen from sites in west Cornwall during the week and one was noted off Cley (Norfolk) on 8th. Back at Galley Head, seawatchers there also recorded three Great Shearwaters and a Sabine's Gull on 4th, with another Sabine's Gull seen there the following day. A first-summer Sabine's Gull was on Blanket Nook, Lough Swilly (Co. Donegal) from 3rd–5th. Around 20 Balearic Shearwaters were seen off the coasts of Dorset, Devon and Cornwall this week, two were seen heading north off Dunbar (Lothian) on 7th and seven were seen off the Great Orme (Conwy) on the same date. Two adult Long-tailed Skuas were seen from a whale cruise off Red Point (Highland) on 4th, and on 7th an adult Long-tailed Skua was seen from another cetacean cruise around Gairloch. An adult Pomarine Skua was seen off Sheringham (Norfolk) on 8th. 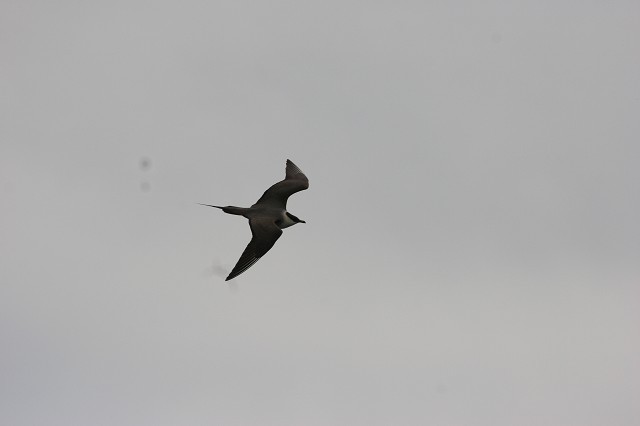 On the Isle of Wight, the Cattle Egret was again at Brading Marshes on 5th. The Great White Egret lingered in Suffolk at the start of the week (seen at Minsmere on 2nd) and on 3rd another was found on the Ythan Estuary (Aberdeenshire), where it stayed until 6th. On 5th a Great White Egret was found on Graemeshall Loch, Mainland (Orkney); this bird remained for the rest of the week. At least 10 Spoonbills were still around Cley (Norfolk) this week, with a further 10 spread across the country from Suffolk to Perth & Kinross. Pairs of Common Cranes were seen in Bedfordshire, Shropshire and Clwyd on 2nd, with the latter border-hopping birds remaining at Fenn's Moss to 3rd. A lone Common Crane was at Caerlaverock (Dumfries & Galloway) on 4th. On the Somerset Levels, the singing, summering Little Bittern was still around the reedbeds of Walton Heath throughout the week. Interestingly, a male Little Bittern has also been reported "recently" from Shapwick Heath (there aren't two birds present, are there?) Singing male Spotted Crakes were still on Islay (Argyll) and South Uist (Outer Hebrides) this week. 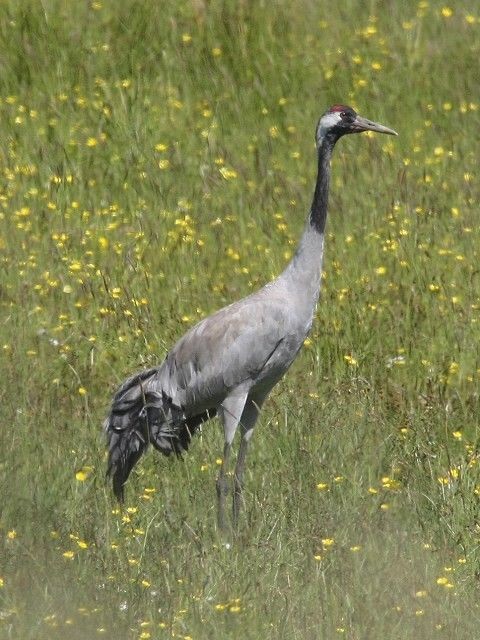 Quite what the origins are of the two white Snow Geese seen on 5th at the Ythan Estuary and then Loch of Strathbeg in Aberdeenshire is anyone's guess, but who knows, maybe they're the real deal! No such problem for another Aberdeenshire bird: a drake Surf Scoter continued to frequent the seas off Blackdog until 3rd at least. The only other duck of any note this week was the moulting drake Green-winged Teal that was at Graemeshall Loch, Mainland (Orkney) on 2nd–6th. An eclipse drake Blue-winged or Cinnamon Teal was reported at Saltholme Pools on 5th–6th but nothing more seems to have come of this individual.

A female Red-footed Falcon was reported from the Twyford area of Hampshire on 2nd and may have been present for two or three weeks prior to this. Next door in Dorset, a Black Kite was seen near Wareham on 8th, while over on St. Kilda (Outer Hebrides) the male Snowy Owl was still present on 1st. Breeding Honey Buzzards in the public domain continued to show well at Swanton Novers in Norfolk and Wykeham Forest in North Yorkshire. 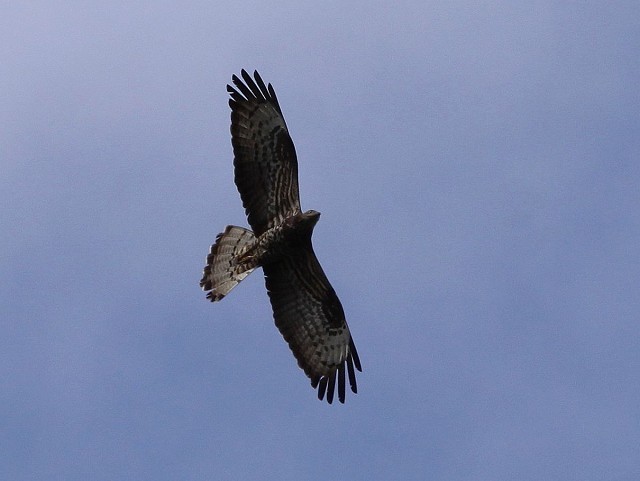 A Buff-breasted Sandpiper on Cley Marshes (Norfolk) from 6th–7th proved popular and was (perhaps surprisingly) the first record of the species on the reserve for a decade or more. On 8th, the bird made a brief mid-afternoon appearance at Titchwell, before relocating back to Cley's North Scrape as early evening approached. Two Pectoral Sandpipers appeared this week, on 3rd at Meden Vale (Nottinghamshire) and on 5th at Clogheen Marshes (Co. Cork). Staying in Ireland, a Temminck's Stint was seen in the roost on the Rogerstown Estuary (Co. Dublin) on 2nd. A Red-necked Phalarope was still being seen from the viewpoint on Lewis (Outer Hebrides) on 3rd, while in Kent, a probable American Golden Plover was seen at Cliffe Pools on 8th. 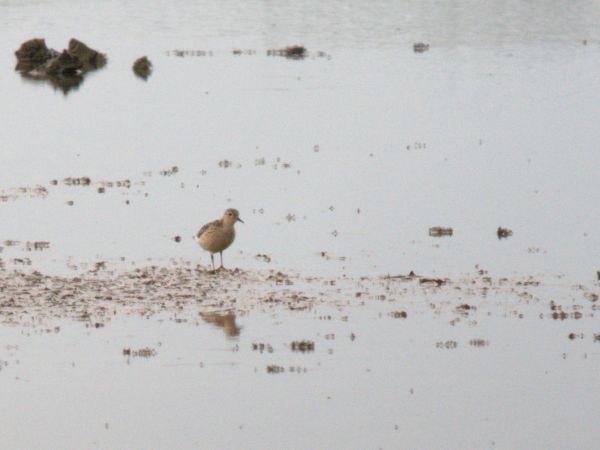 A first-summer Ring-billed Gull was seen on the beach at Sandymount (Co. Dublin) on 4th while four summering Iceland Gulls included two birds on the Outer Hebrides and the two summering Glaucous Gulls were in Cornwall and Highland. A near-adult Caspian Gull was at King George VI Reservoir (Surrey) on 7th. A dazzling adult summer White-winged Black Tern brightened up a cool and breezy grey day at Cley on 8th, while Herefordshire's first Whiskered Tern spent an hour or so at Wellington GPs on 3rd. A Caspian Tern at Welney (Norfolk) lingered a little longer on 4th — despite the occasional disappearing act it showed well for much of the day and was still present until just after midday on 5th before relocating to Wiggenhall St Germans and then heading west again. Another Caspian Tern spent a couple of hours on the Ythan Estuary (Aberdeenshire) on 4th, the first in the county since one (at the same site) in the summer of 1976. 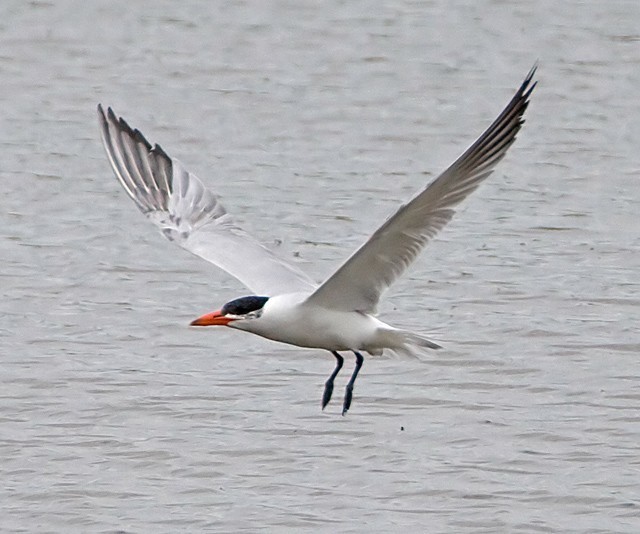 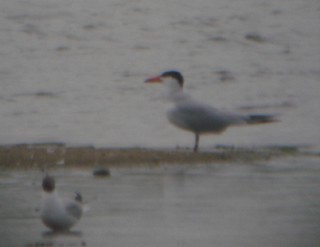 Golden Orioles continued to show well at Lakenheath Fen (Suffolk/Norfolk) throughout the week and stray summer singles were seen at Eyemouth (Borders) on 4th and, in East Sussex, at Rye Harbour on 3rd and Pett Levels on 6th. The former site was also host to a male Red-backed Shrike on 3rd. In Shropshire, two Bee-eaters were reported at Melverley Green, along the River Severn, on 3rd. The singing male Marsh Warbler was still giving it his all on Otmoor (Oxfordshire) throughout the week, while nothing was heard after the first report of a probable Great Reed Warbler at Hummersea (Cleveland) on 3rd.

In Dorset, at Portland Bill, a Serin was seen on 4th, while singing male Common Rosefinches were on North Ronaldsay (Orkney) on 3rd and still at St Ouen's Pond (Jersey) on the same date. A probable male Two-barred Crossbill was seen with a dozen Common Crossbills at Loch Ettrick (Dumfries & Galloway) on 3rd, but there's no sign yet of anything like a repeat performance of last summer's remarkable invasion. This week's review concludes with a brief adult Rose-coloured Starling in Falmouth (Cornwall) on 2nd. 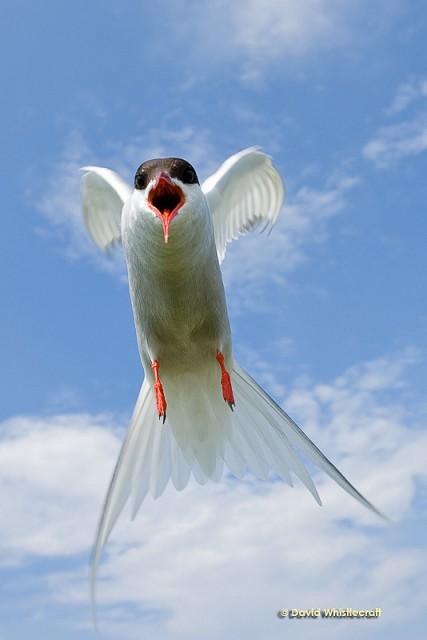 Although Arctic Terns are slender, fragile-looking birds, visitors to the Farne Islands are all too aware that they can be quite vicious on their breeding grounds, easily drawing blood from those who pass by unprotected. Capturing this spectacle photographically therefore takes considerable nerve as well as top-notch technique. Norfolk-based photographer David Whistlecraft shows how this should be done, using a wide-angle lens (24mm zoom setting) and small aperture (f/8) to get enough depth of field to capture detail in the glorious summer sky as well as in the whole of the attacking bird. More importantly, this focal length provides exaggerated perspective which, together with the tern's menacing pose, emphasises the sense of danger. David's image conveys an unusual combination of beauty and aggression 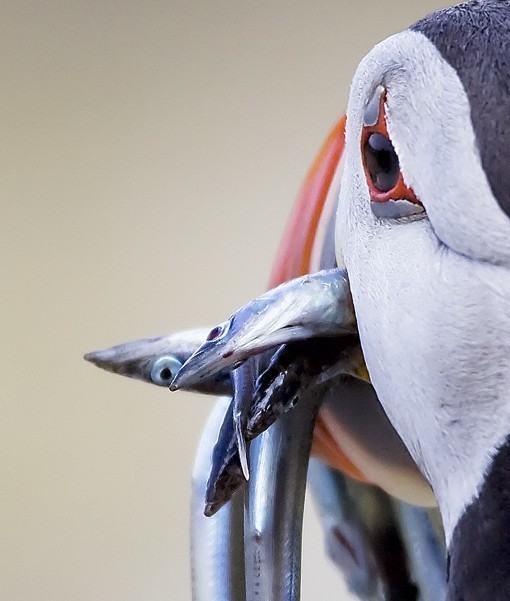 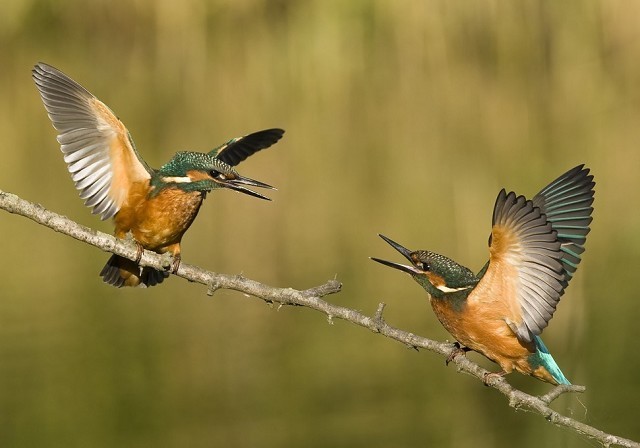 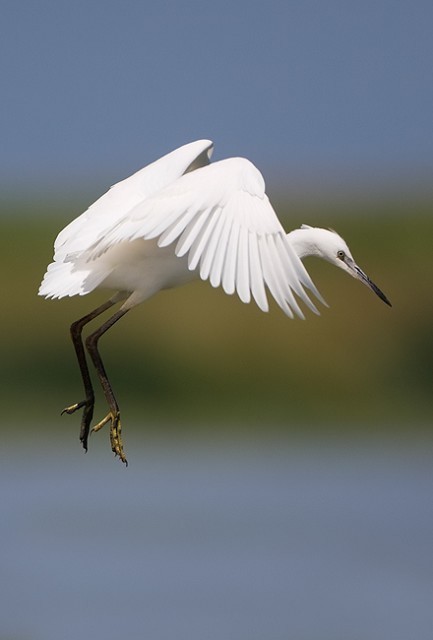 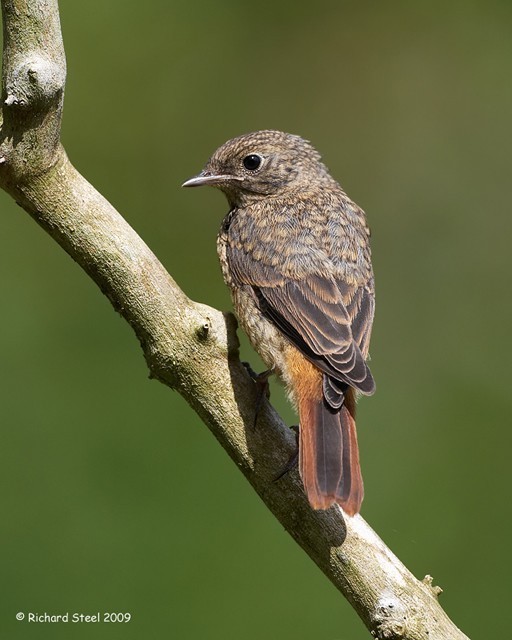 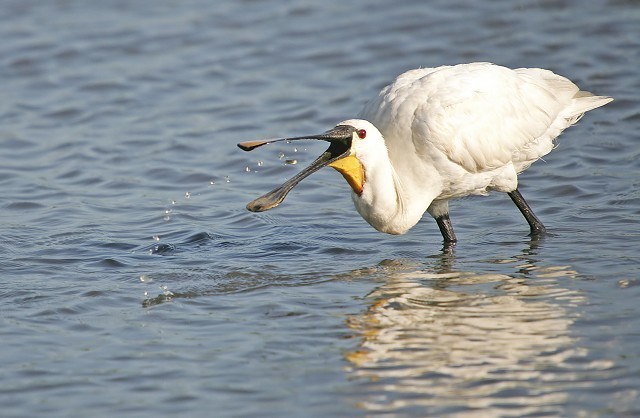 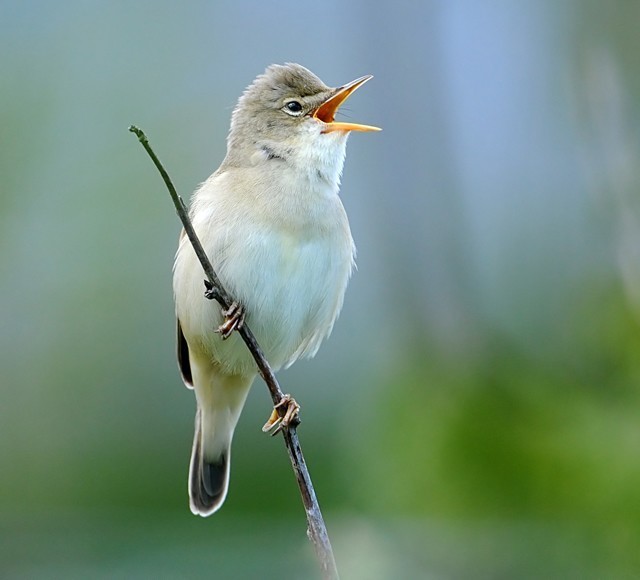 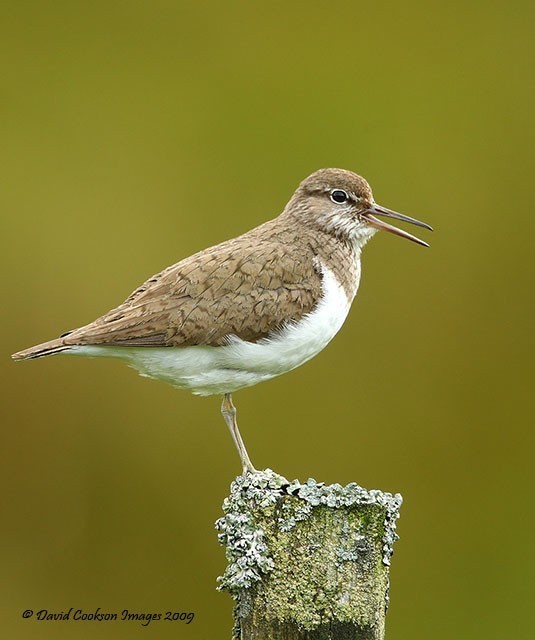 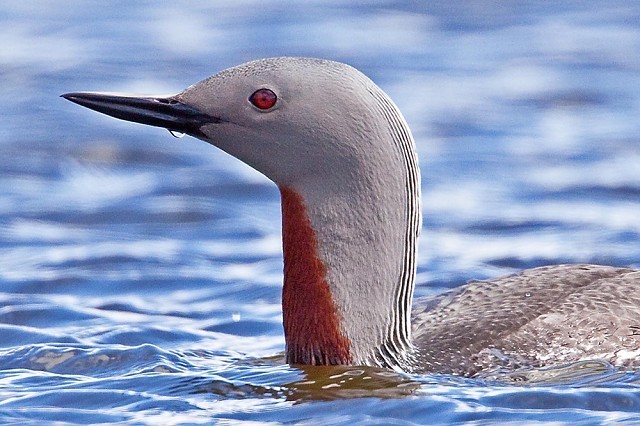 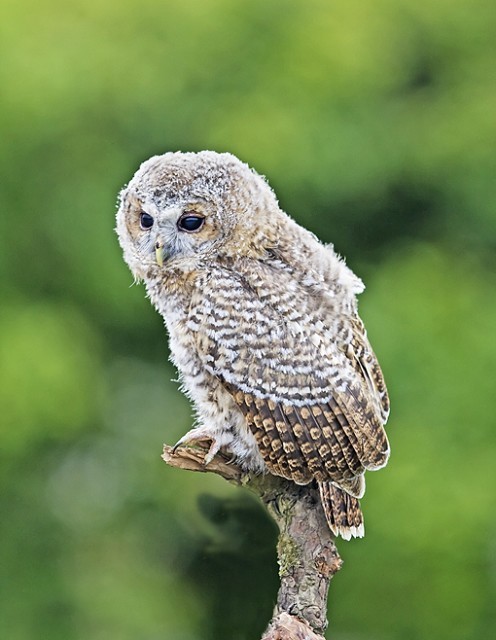 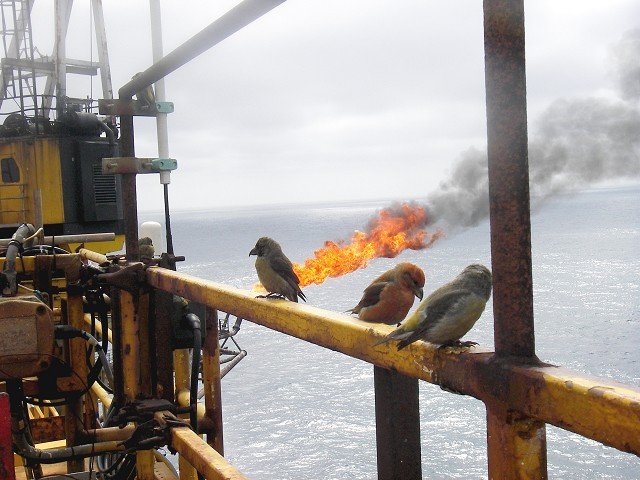