The party of 4 Penduline Tits remained at Rainham Marshes (Gtr London) though the week, showing well on occasion. The Hume's Leaf Warbler was again seen at Horsey (Norfolk) on 6th, and the Whitley Bay (Northumbs) bird again put in an appearance from the 4th onwards. In Swansea (Glamorgan) the male Black-throated Thrush was reported up to at least the 6th. Arctic Redpolls may no longer be BBRC rarities but they're still a tricky bird to identify, though more birds of the race exilipes were located this week; birds of this race are often now referred to as Coues's Arctic Redpoll. A probable was at High Hoyland (S. Yorks) from 5th onwards and another was at Swale NNR (Kent) on 8th. Up to two were still at Icklingham (Suffolk) and one remained at Aberlady Bay (Lothian), plus a possible was reported from Rendlesham (Suffolk). The Common Rosefinch continued to prove popular, if elusive, in Sheffield (S. Yorks), as did the Little Bunting at Morston (Norfolk), and Northern Long-tailed Tit at Easington (E. Yorks). The Yellow-browed Warbler was still present at Weeping Cross (Staffs) through the week, and a presumed Siberian Chiffchaff was trapped and ringed at Copford sewage works (Essex) and another reported from Carnon Downs (Cornwall). The Hoopoe was last reported from Gosport (Hants) on 3rd, whilst the Richard's Pipit is still wintering at West Kirby (Cheshire). On Shetland the Black-bellied Dipper carrying a Norwegian ring (it was ringed as a chick in Norway in 2004) is still at Voe and another was at Dale golf course (Shetland). Great Grey Shrikes totalled just 7 different birds, and there were still just 7 Shore Larks, 6 at Holkham (Norfolk) and one at Minsmere (Suffolk). Around 19 Lapland Buntings were reported, nearly all along the east coast, including 8 at Frampton Marsh (Lincs), though two were at Goodwick (Pembrokeshire). Waxwing numbers continue to dwindle slowly, with peak counts 96 in Aberdeen and 80 in Glasgow (Clyde).

In Angus and Dundee the adult Bonaparte's Gull was relocated at Lunan Bay on 2nd, but has not been seen since. The 1st-winter Franklin's Gull was at Dundrum Bay (Co. Down) to 4th and a possible was reported past Eccles on Sea (Norfolk) on 5th. Seven Laughing Gulls were still at large during the week: at Moatlands GP (Berks); Brixham (Devon); Glaslyn Marshes (Gwynedd); Rosscarbery (Co. Cork); Nimmo's Pier (Co. Galway); Ardrossan (Ayrshire) and Campbeltown (Argyll). The 2nd-winter American Herring Gull was reported from Culmore Dump (L'derry) and the 3rd-winter remained at Nimmo's Pier (Co. Galway). Glaucous Gulls just scraped into double figures, though over 35 Iceland Gulls were reported, with maximum counts of 5 at Culmore Dump (L'derry), up to 5 at Thurso/Scrabster (Highland). Adult Kumlien's Gulls were noted in Cheshire and Wiltshire, the 2nd-winter was at Culmore Dump, with the 3rd-winter at Nimmo's Pier, whilst 1st-winters were reported from Dungeness (Kent) and Par (Cornwall). Reasonable numbers of Caspian Gulls continue to be noted with approaching 20 different birds, and 15 Ring-billed Gulls were seen during the week. The 1st-winter Forster's Tern was at Ballycotton (Co. Cork) as was the adult at Nimmo's Pier. Two Pomarine Skuas were in Yell Sound (Shetland) on 4th. The Temminck's Stint was on North Ronaldsay (Orkney) to at least 6th, an unseasonable Stone Curlew was at North Hayling (Hants) from 5th-6th and had apparently been ringed at Martin Down NNR (Hants) in 1998. Both the Long-billed Dowitcher on the Hayle Estuary (Cornwall) and Lesser Yellowlegs at Clonakilty (Co. Cork) remained through the week, as did the Little Ringed Plover at Ballycotton. 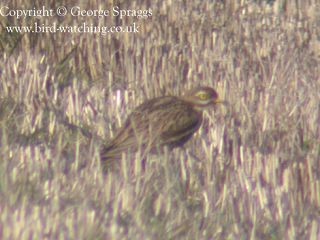 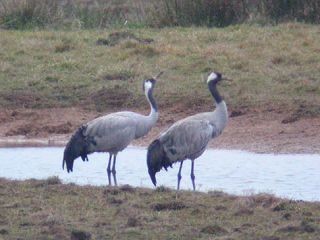 
Three Great White Egrets were reported: singles at Cork (Co. Cork) on 5th, Dundrum Bay (Co. Down) on 5th and Harty Ferry (Kent) on 8th. News of a Cattle Egret present for several weeks at Hailsham (E. Sussex) came to light on 5th, but there was no further sign. Elsewhere, 8 Cattle Egrets remained at Piddinghoe (E. Sussex), two were still at Pagham (W. Sussex) and singles were at Warblington (Hants) and Britford (Wilts). The White Stork again put in an appearance in Kent, this time at Sevington on 8th. The 4 Common Cranes which were seen in Northeast England in early January and then passed over Northwest England at the end of January were again located, this time on Exminster Marshes (Devon) from 6th. A total of 14 Spoonbills included 4 at Saltash (Cornwall) and 3 on the Taw Estuary (Devon). Rough-legged Buzzards were at Harty Marshes (Kent), Haddiscoe Marshes (Norfolk), Massingham Heath (Norfolk), and Brantham/Feston (Suffolk), with one reported at Blanchland (Northumbs). 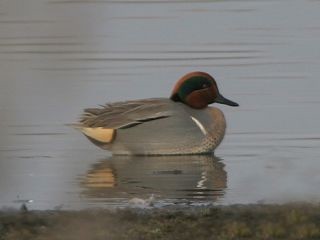 
The wintering Richardson's Canada Goose was again seen in Dumfries and Galloway. Nearly 50 Tundra Bean Geese were reported, including 14 in the Tring area (Bucks/Herts), 9 at both Welney WWT (Norfolk) and Walberswick (Suffolk) and eight at Herringfleet Marshes (Suffolk). Taiga Bean Geese totalled at 136 at Fannyside Lochs (Clyde) and a single remained at Mountnorris, and unspecified Bean Geese included 12 other birds. Ten Black Brants were reported, all with Dark-bellied Brent Geese between Lincolnshire and Dorset except for one on the Mullet (Co. Mayo). An influx of Eurasian White-fronted Geese to the southeast included 264 at Minsmere (Suffolk), 120 at Grove Ferry (Kent) and 126 at Sandwich Bay (Kent), with some sizeable double-figure flocks penetrating inland. The drake Baikal Teal of unknown origin was still at Belfast Lough RSPB (Co. Antrim) and the drake Barrow's Goldeneye was still at Quoile Pondage (Co. Down), as was the presumed Redhead on Tiree (Argyll). The only Surf Scoter to be reported was the regular drake off Rerwick Head (Orkney) and a King Eider was off Peterhead (Aberdeenshire). Drake Lesser Scaup were at Drift Reservoir (Cornwall), and Ouse Washes (Cambs) and a female was at Caerlaverock (Dumfries and Galloway). A drake Ferruginous Duck at Oxford Island (Co. Armagh) was presumably the bird from Craigavon, whilst others remained at Gort (Co. Galway) and New Hythe GPs (Kent). Six Ring-necked Ducks included four in southwest England. Six Green-winged Teal was a modest showing for the time of year, but drake American Wigeons were still at Loch of Strathbeg (Aberdeenshire), Needingworth Quarry Lakes (Cambs), Cross Lough (Co. Mayo), Hayle Estuary RSPB (Cornwall), Westfield Point (Cumbria), Wick (Highland), and Shader Beach (Outer Hebrides), plus one at North Duffield Carrs (N. Yorks). 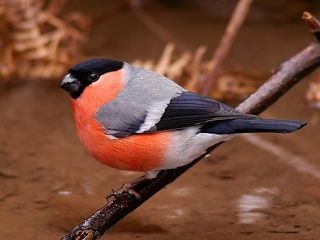